Loading…
Forward with lots of clarity.
Pros: Warmth and not purely cold clarity.
Passive isolating.
Lots of imaging seperation.
Can generate a wet subbass profile.
Very clear vocals for those that want them.
Comes with modular cable that can switch from balanced/single-ended.
Cons: Not necessarily a con, but forward presentation (ie, vocals). But goes away at lower healthier listening volumes.
Not necessarily a con, but lots of treble.
Wide nozzle that will require using smaller tips so it isn't as stuffing.
Modular adapters are bulky.
Thieaudio V16 Divinity:

First thing I notice it's high shelved treble. Airy, but borderline metallic. Its alot like the ier-z1r treble timbre; this is a positive thing.

It can generate a wet bass profile when a song calls for it. And the subbass doesn't got distracting reverb. Very good for synth stuff.

Midbass is punchy in a drier/snappy sense, not as rounded as the Sennheiser ie900 (but ie900 is a benchmark for so). So very competent. (this midbass behavior changes between my sources. Does better on my dx300 dap than the dx300max dap)

Thick noted. Instrument overtones and harmonics are both being presented with not much masking.

Vocals are forward; you can notice/unforgiving to the distortion of old tracks in their vocals.

I mentioned earlier, high shelved. Will require brain burn-in to get used to. I haven't noticed anything cursed about the last octave treble.

Lots of clarity but expect that it comes with a cost that it may be forward & fatiguing, but not cursed in so.

EDIT: Switching from the supplied white tips for JVC Spiraldots++ does help compensate positively. But I think I need to order a step smaller Spiraldots++.

Azla Crystals TWS I forced on and it stretch to the size of the nozzle...lmao....but it kind of makes the thick ass nozzle act like a ciem.

Alot like my Final Audio a8000 as I assumed before. But better seperation of the overtones & upper-harmonics from masking. More wetter bass on the v16. 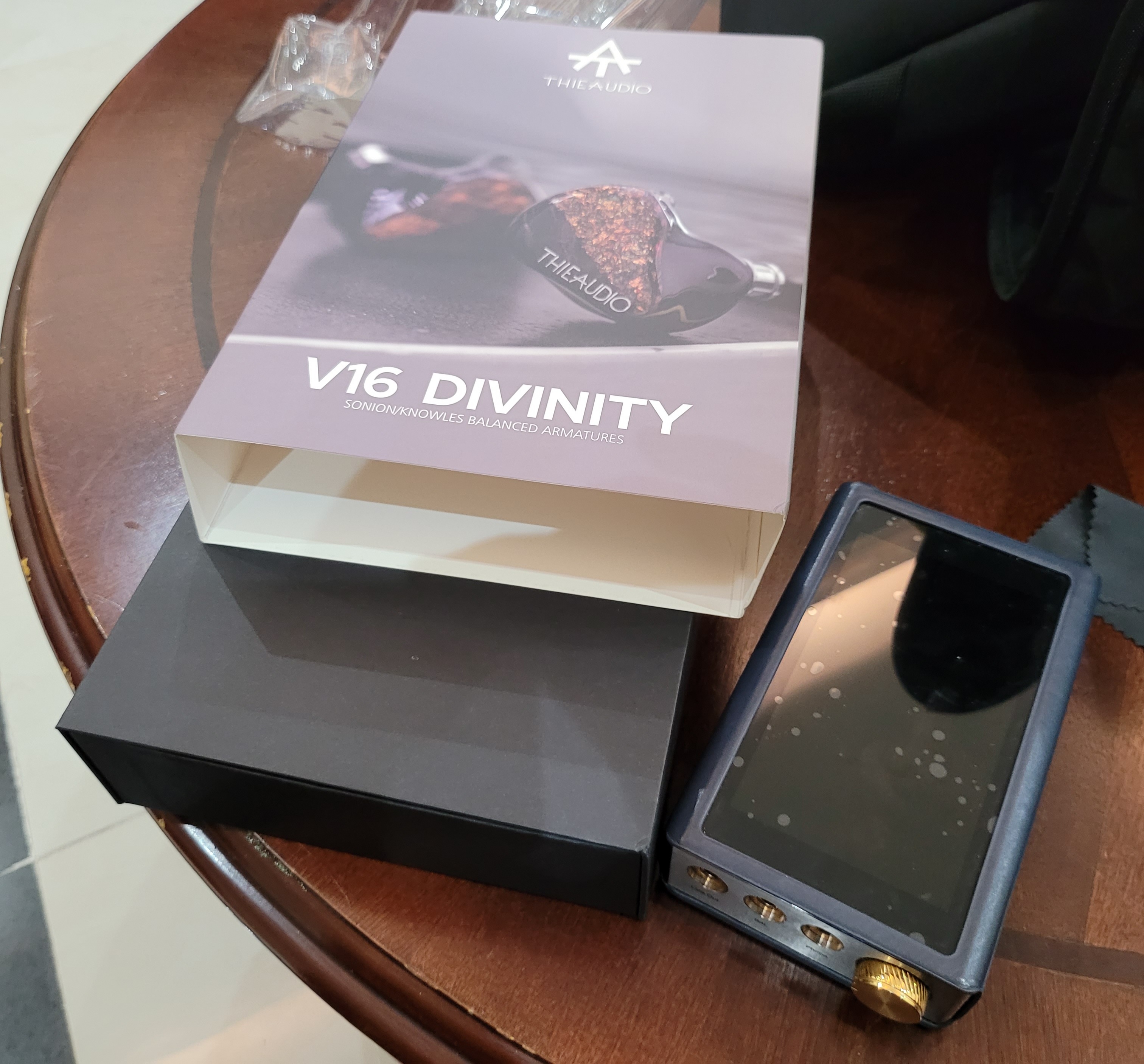 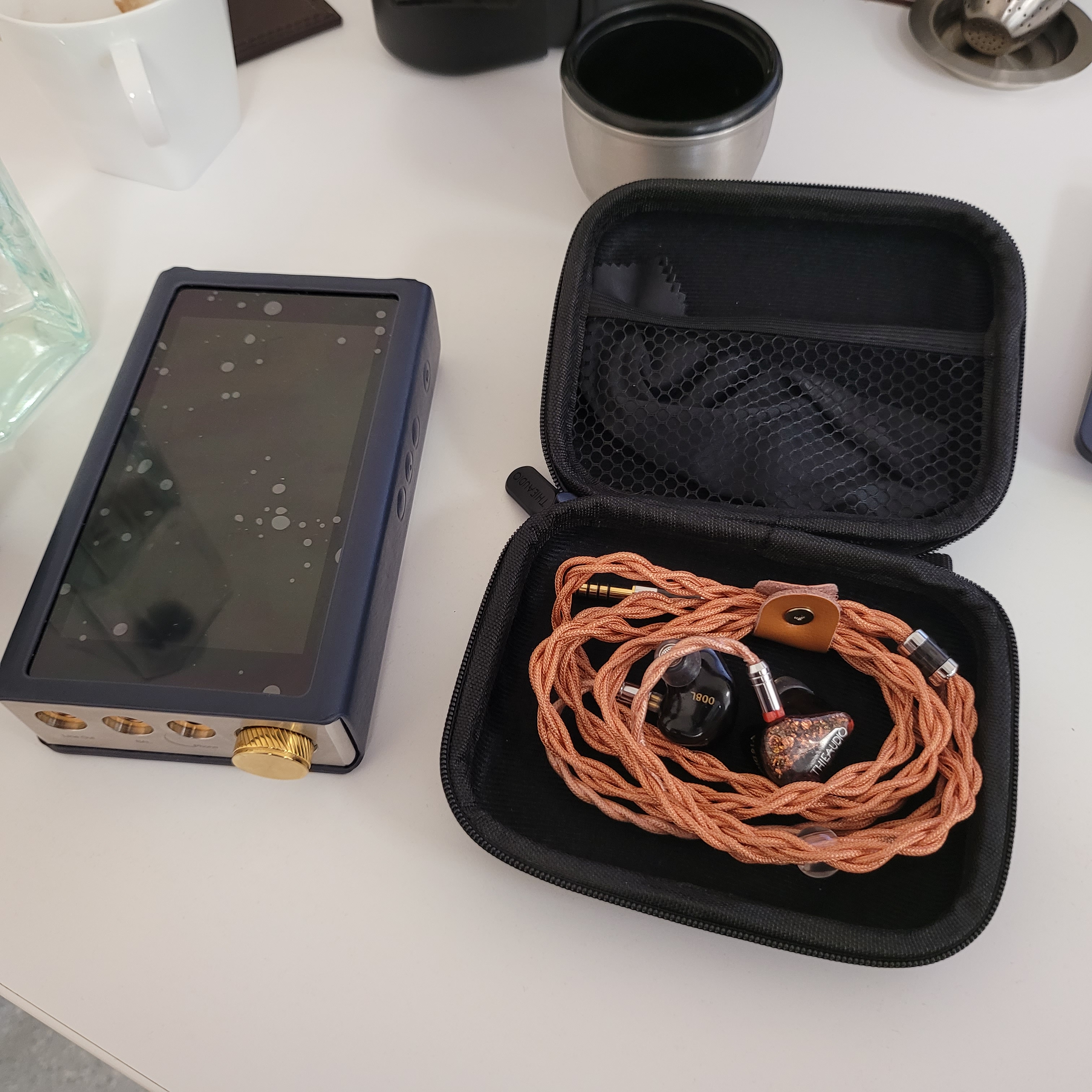 Thieaudio V16 case conveniently fits the Ak240. If I wasn't using my other huge brick of a ibasso 300max dap instead. 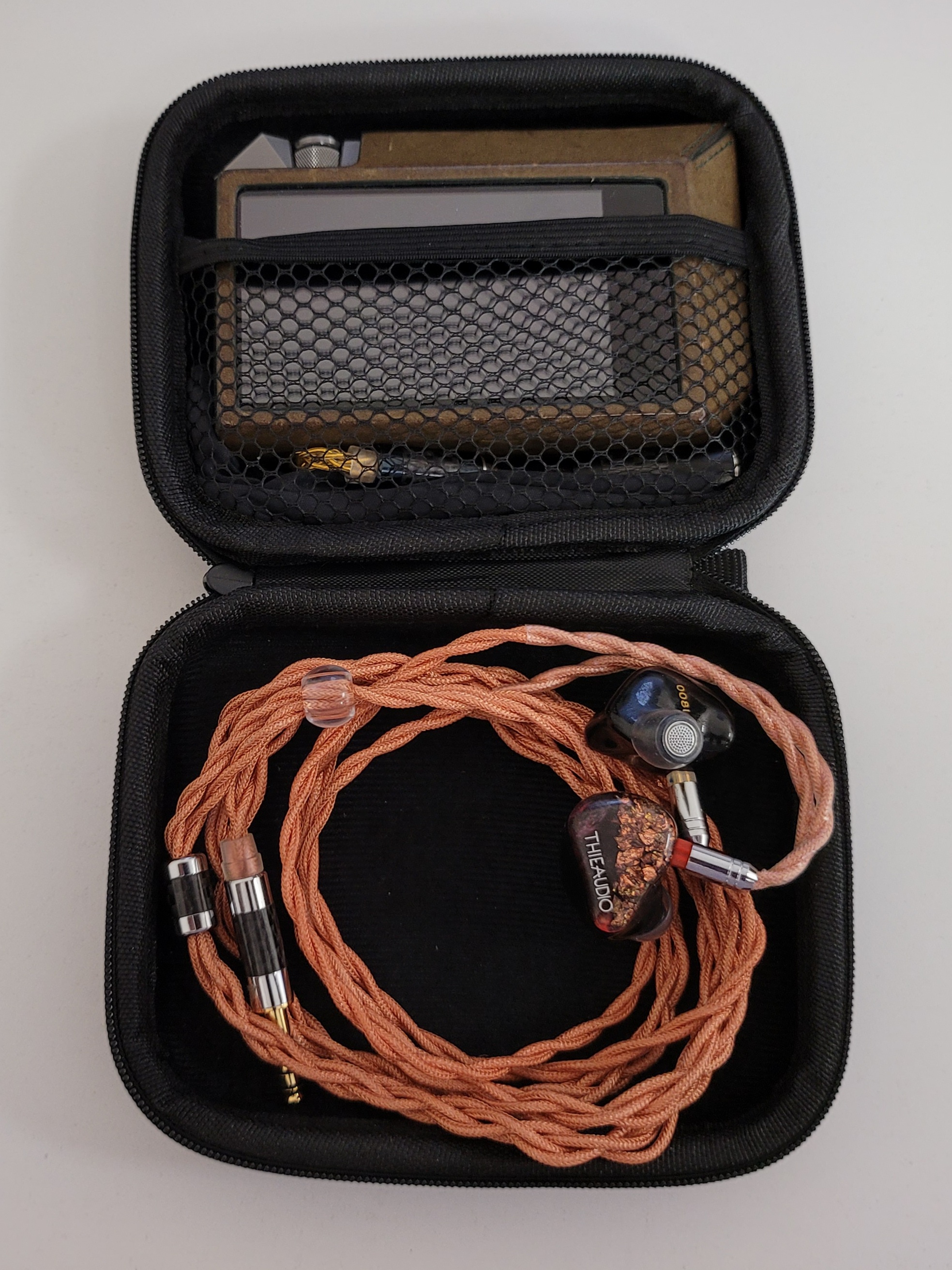 Modular cable bulkier than the average. Other cable I have is a Linsoul LSC09. 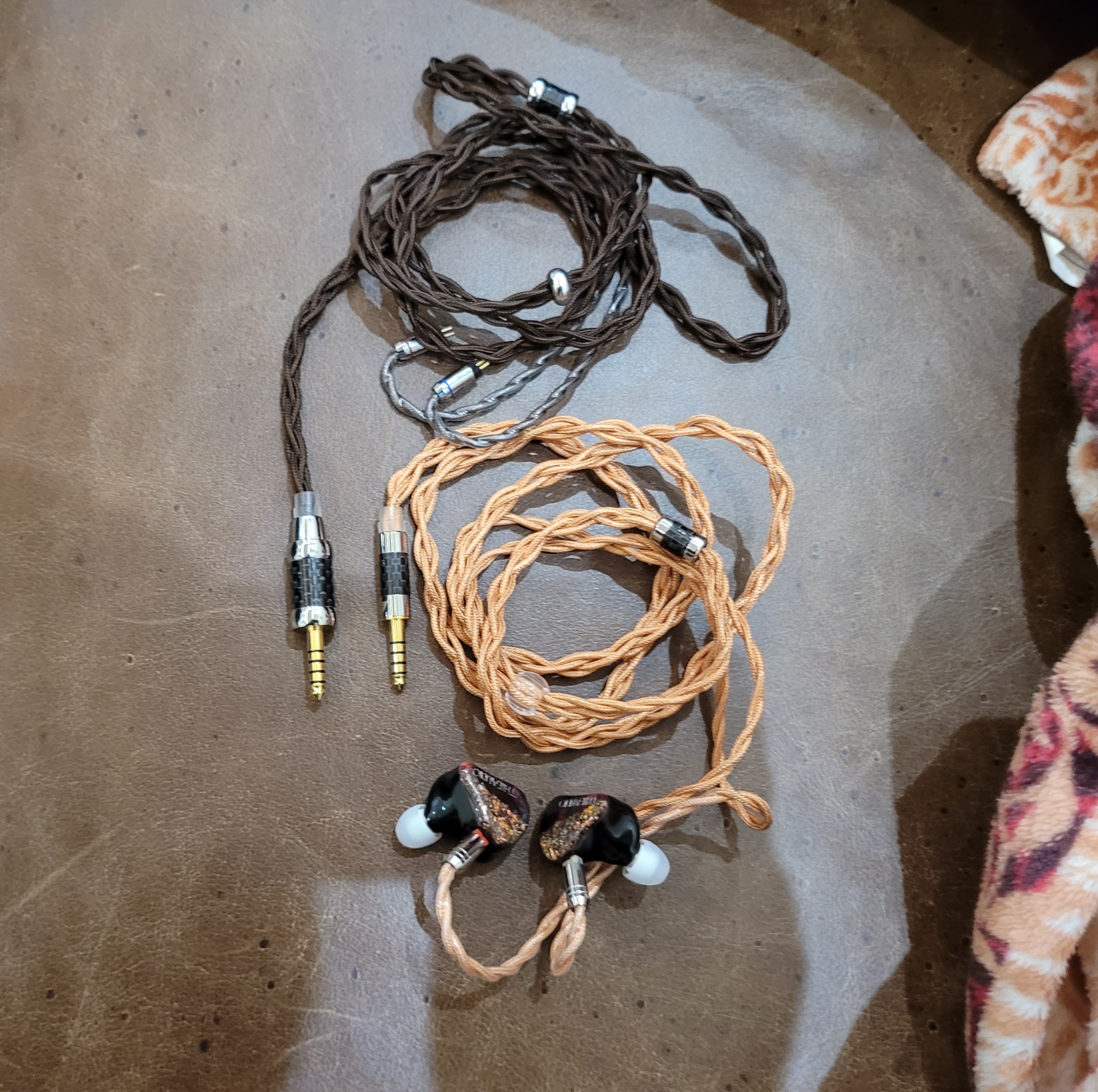 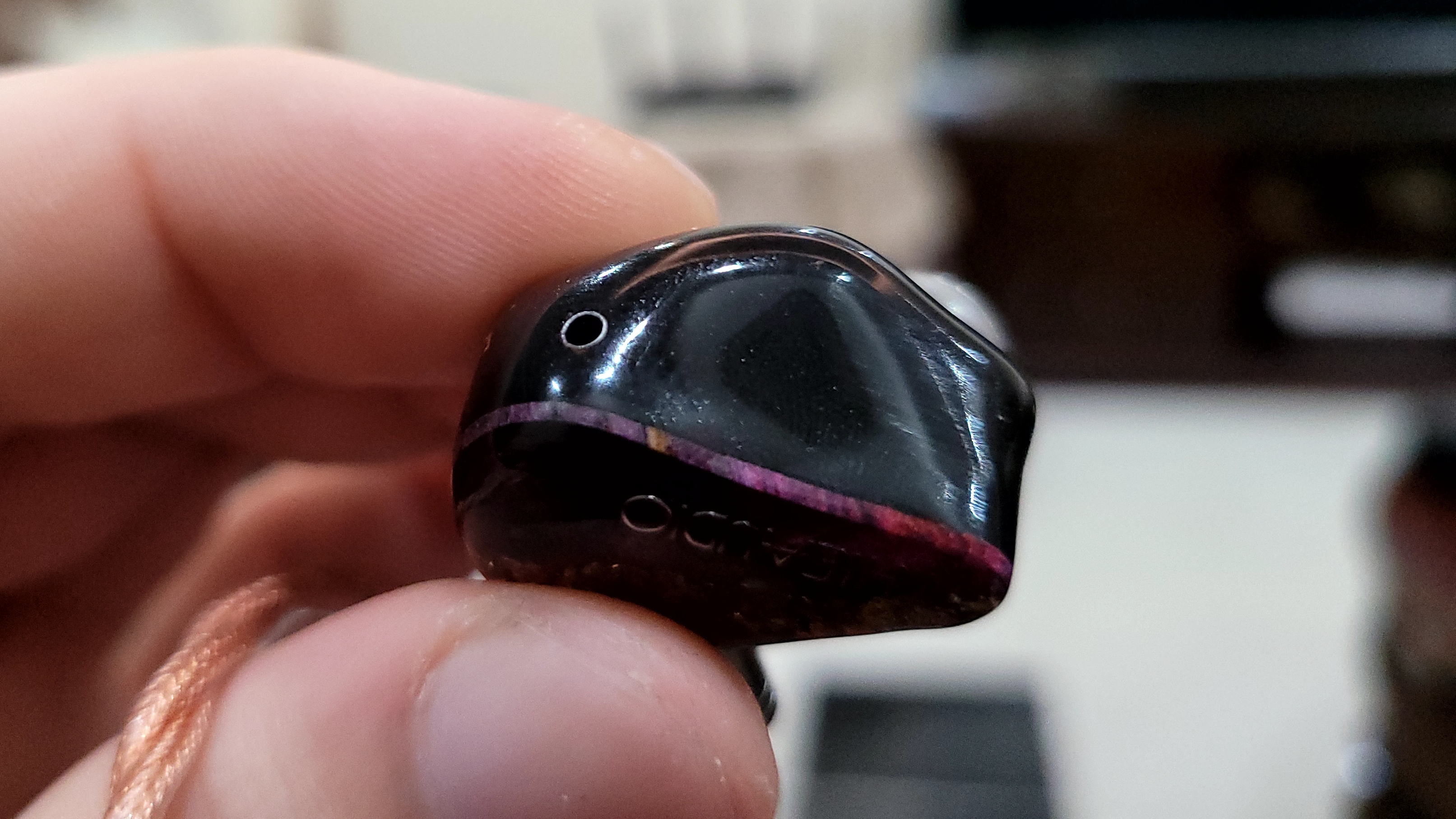 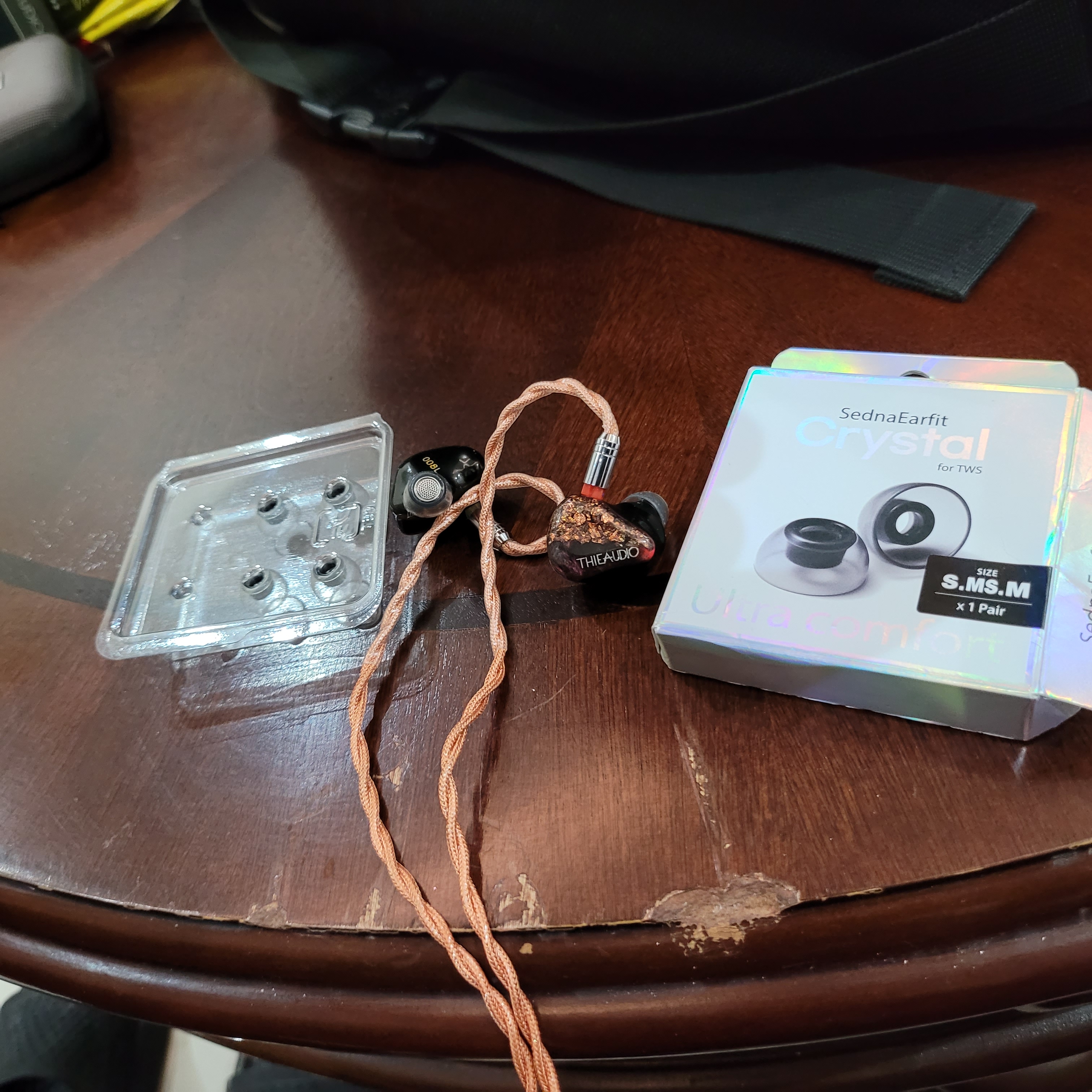 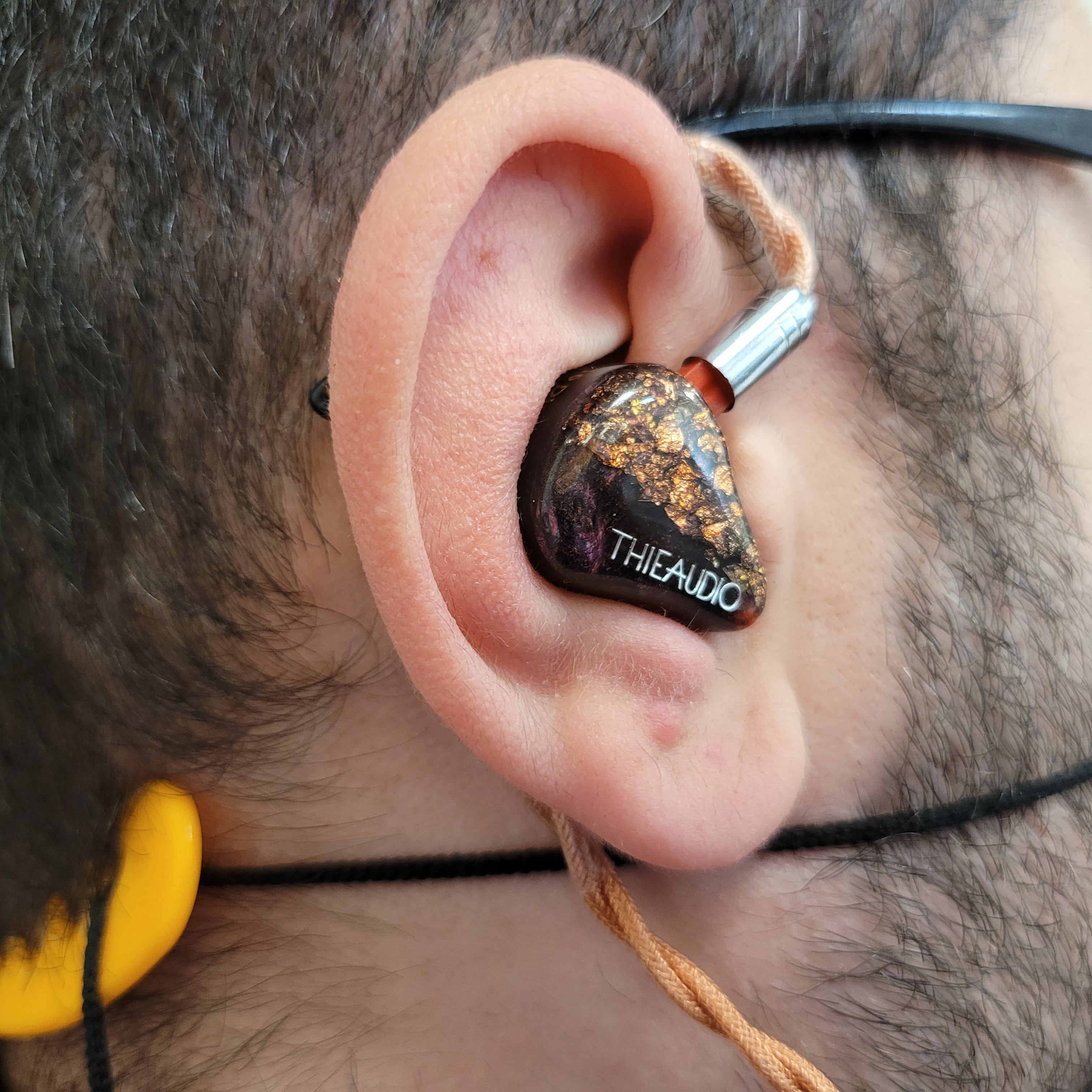 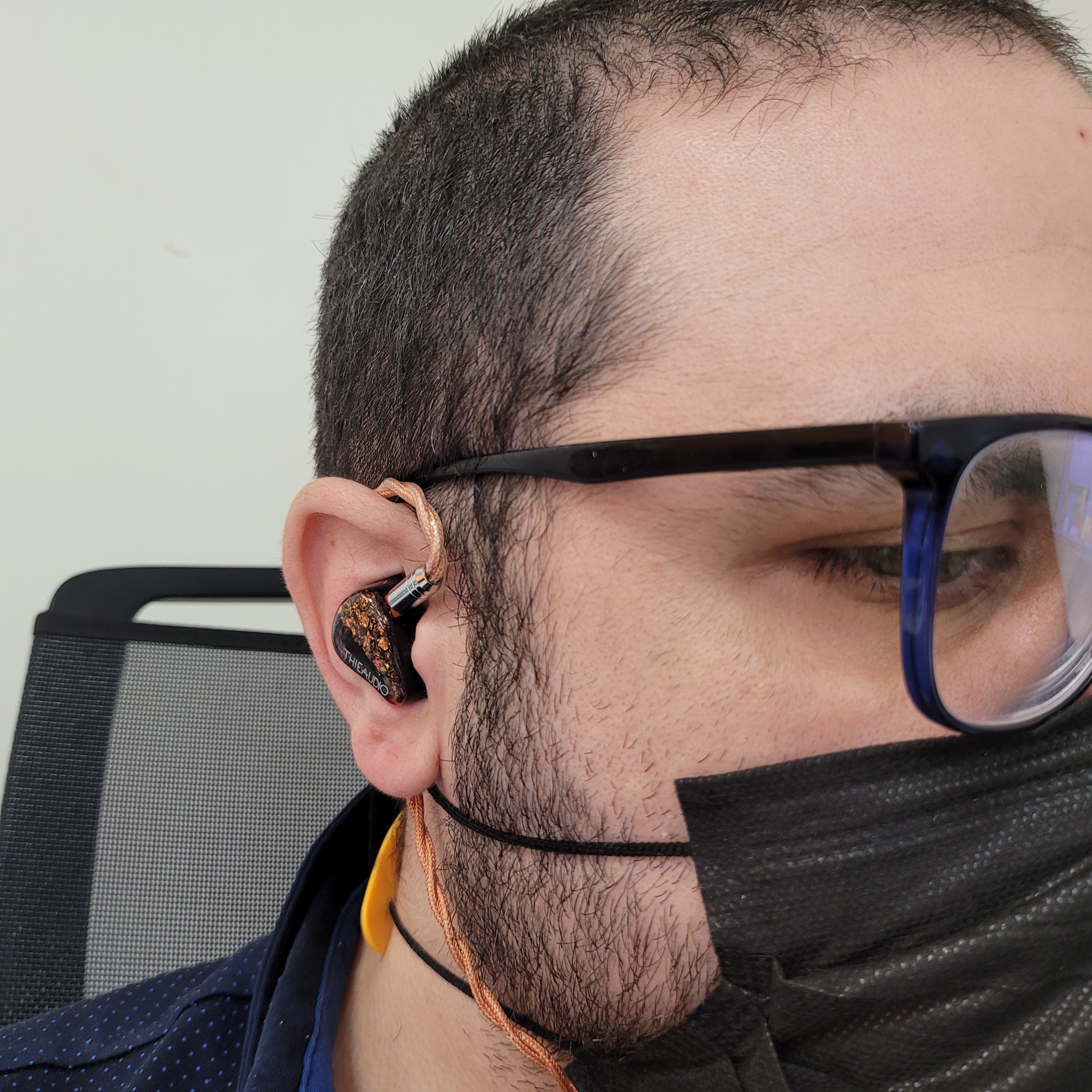 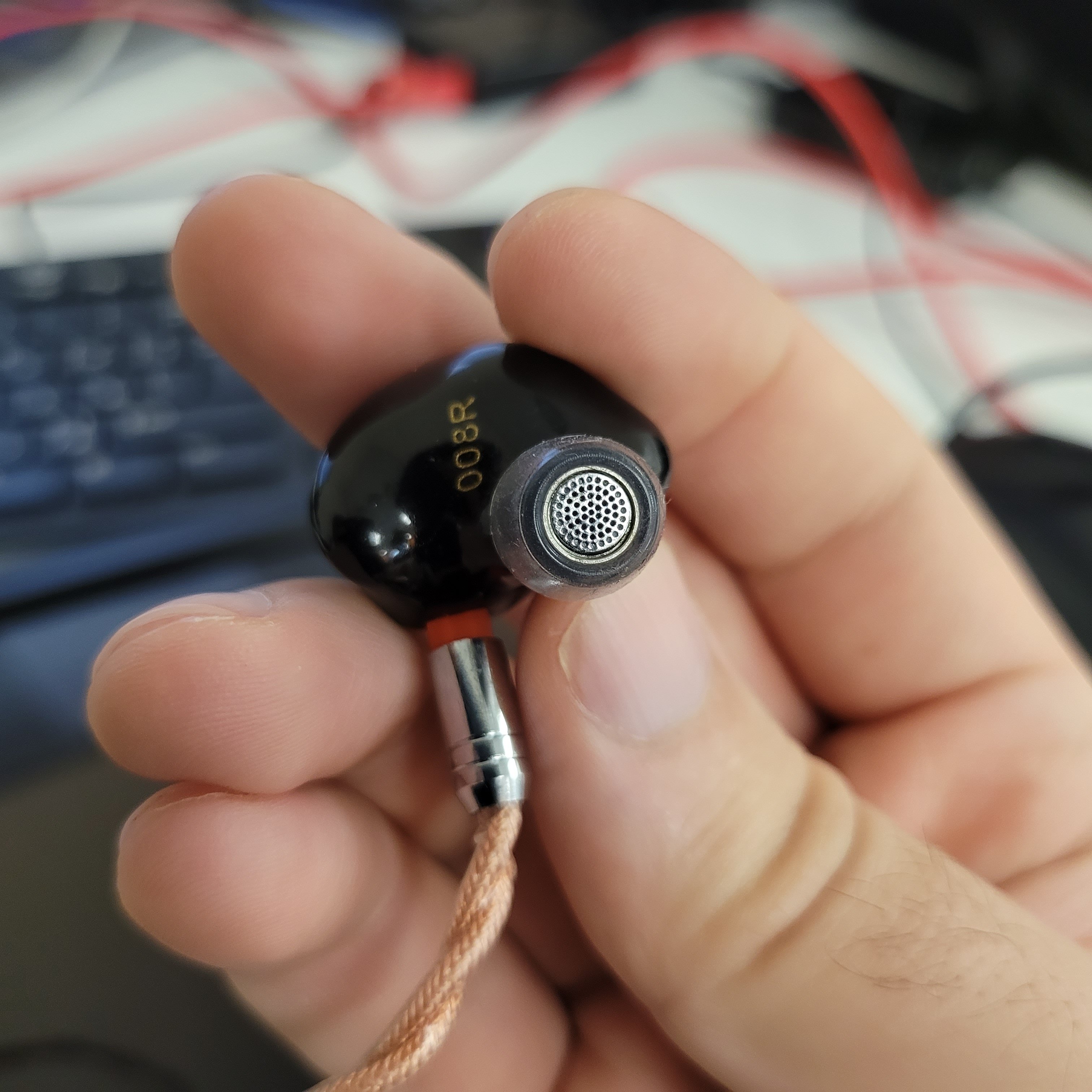 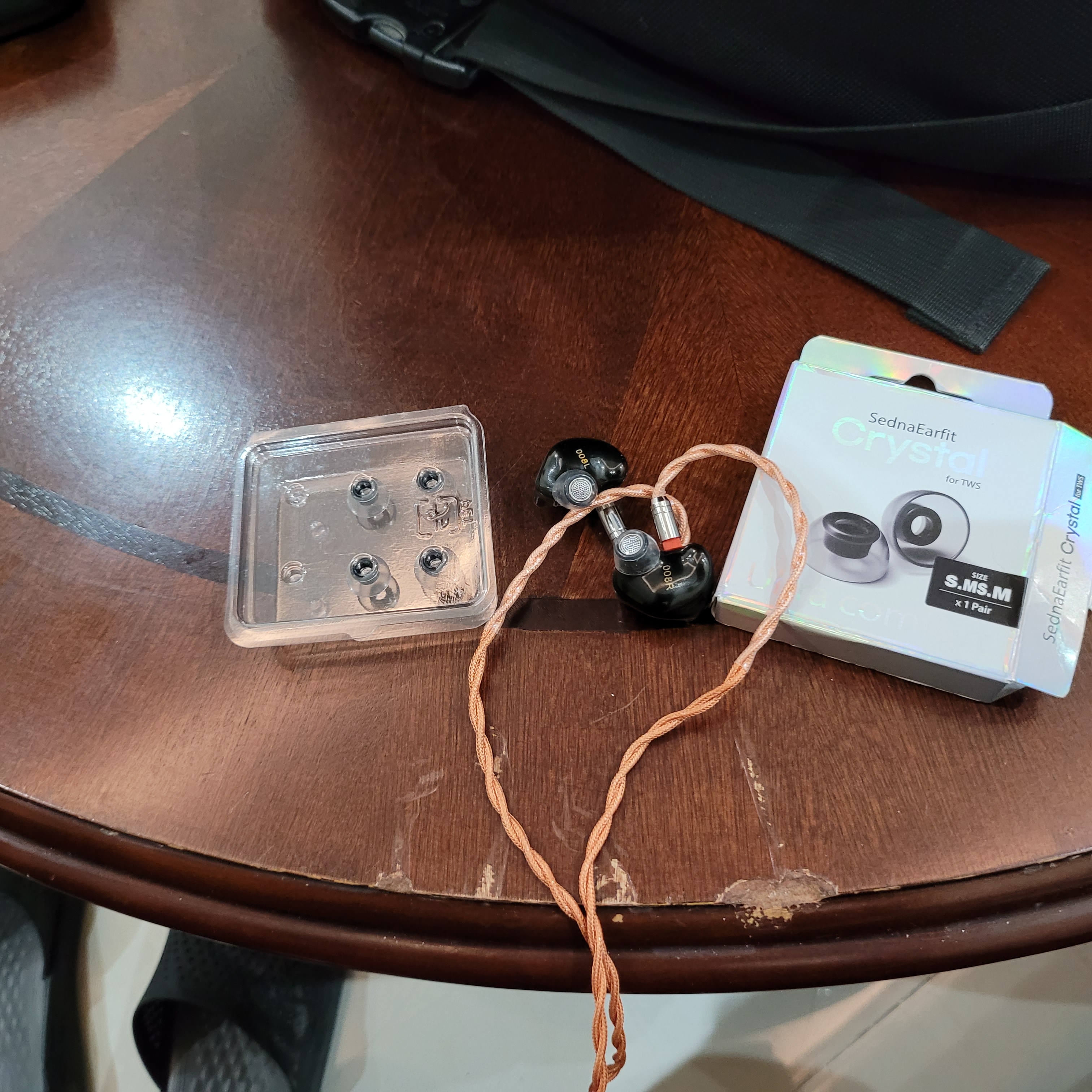 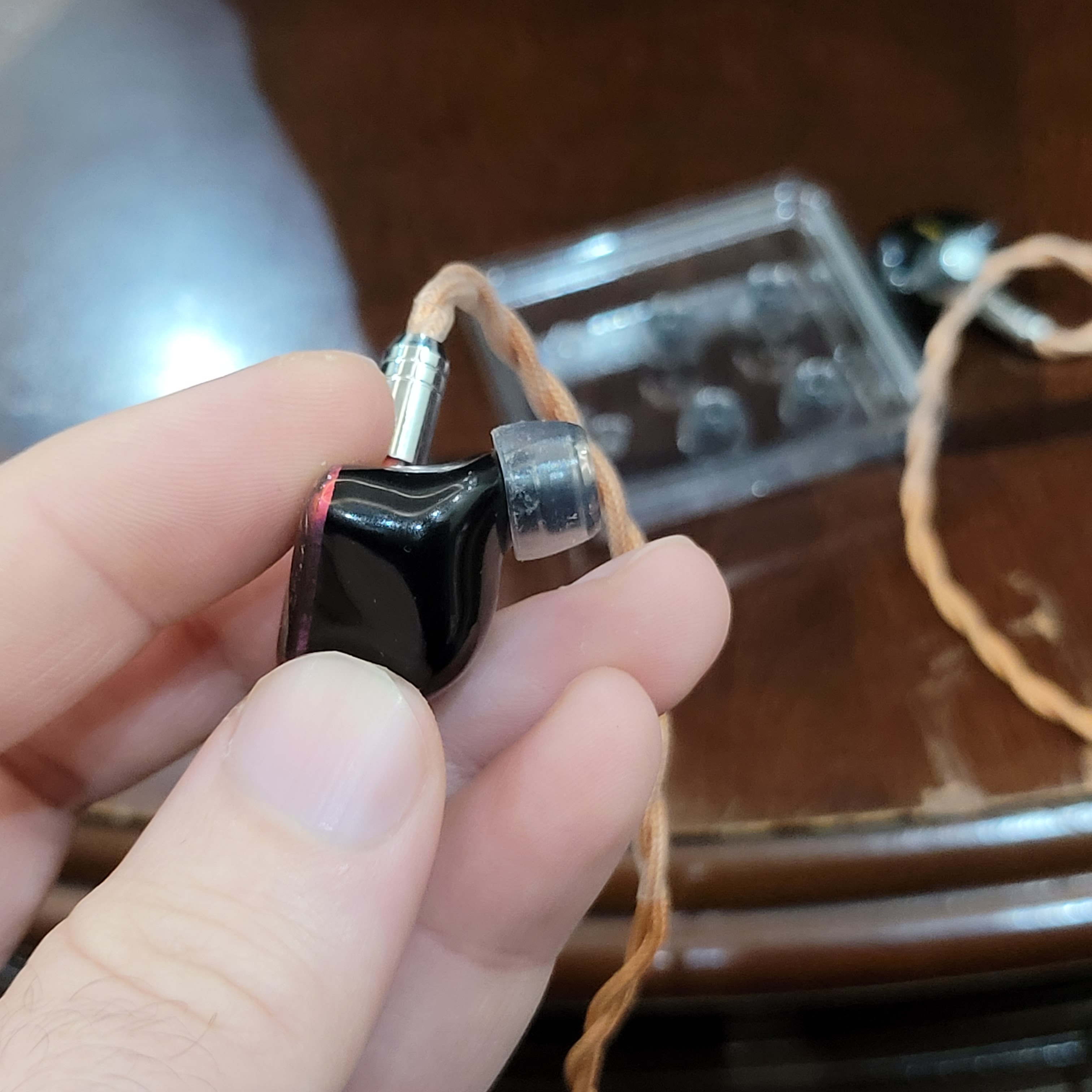 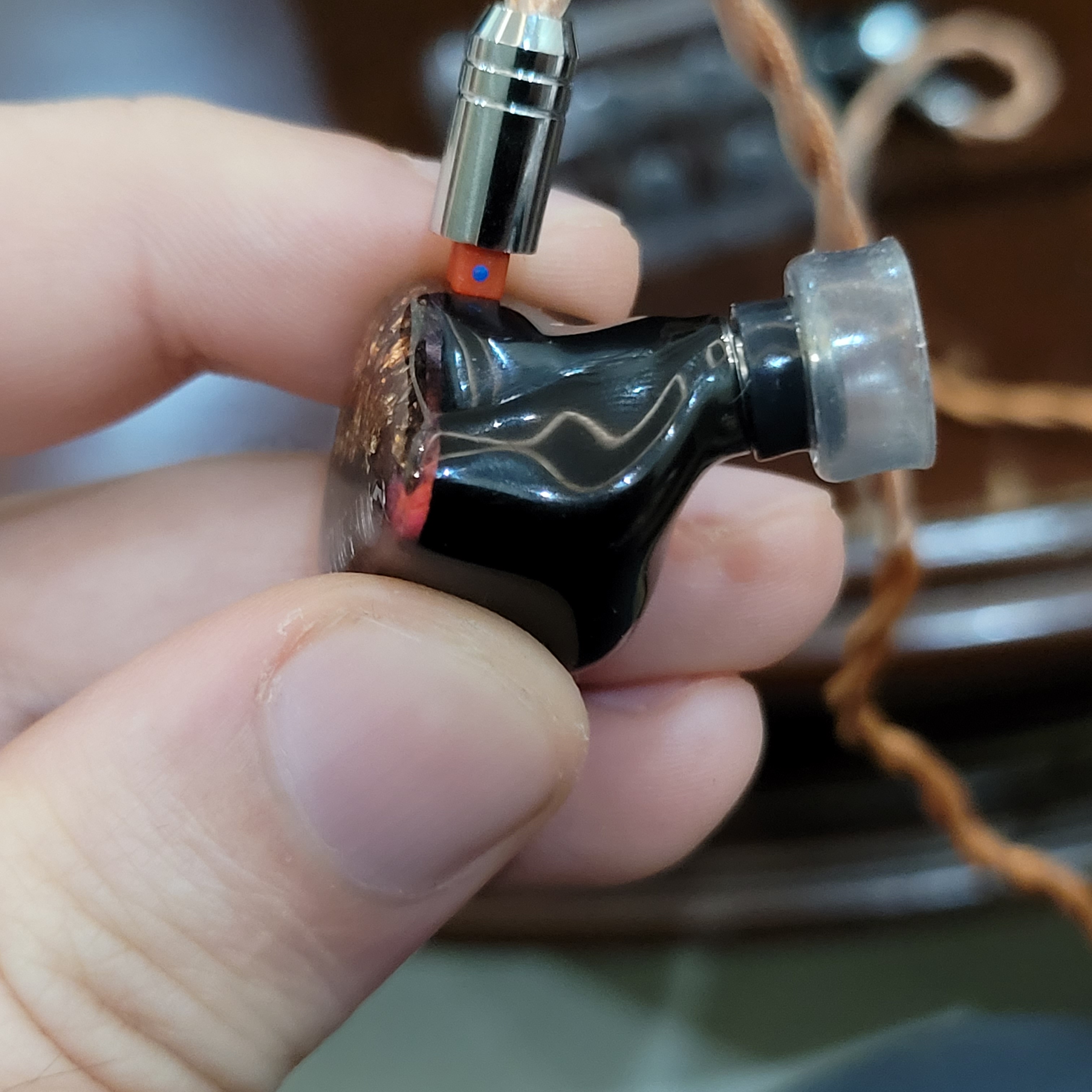 just realized the right unit of the V16 has a fun little subtle detail.

There is a splash of red in the faceplate's corner to indicate the right unit. 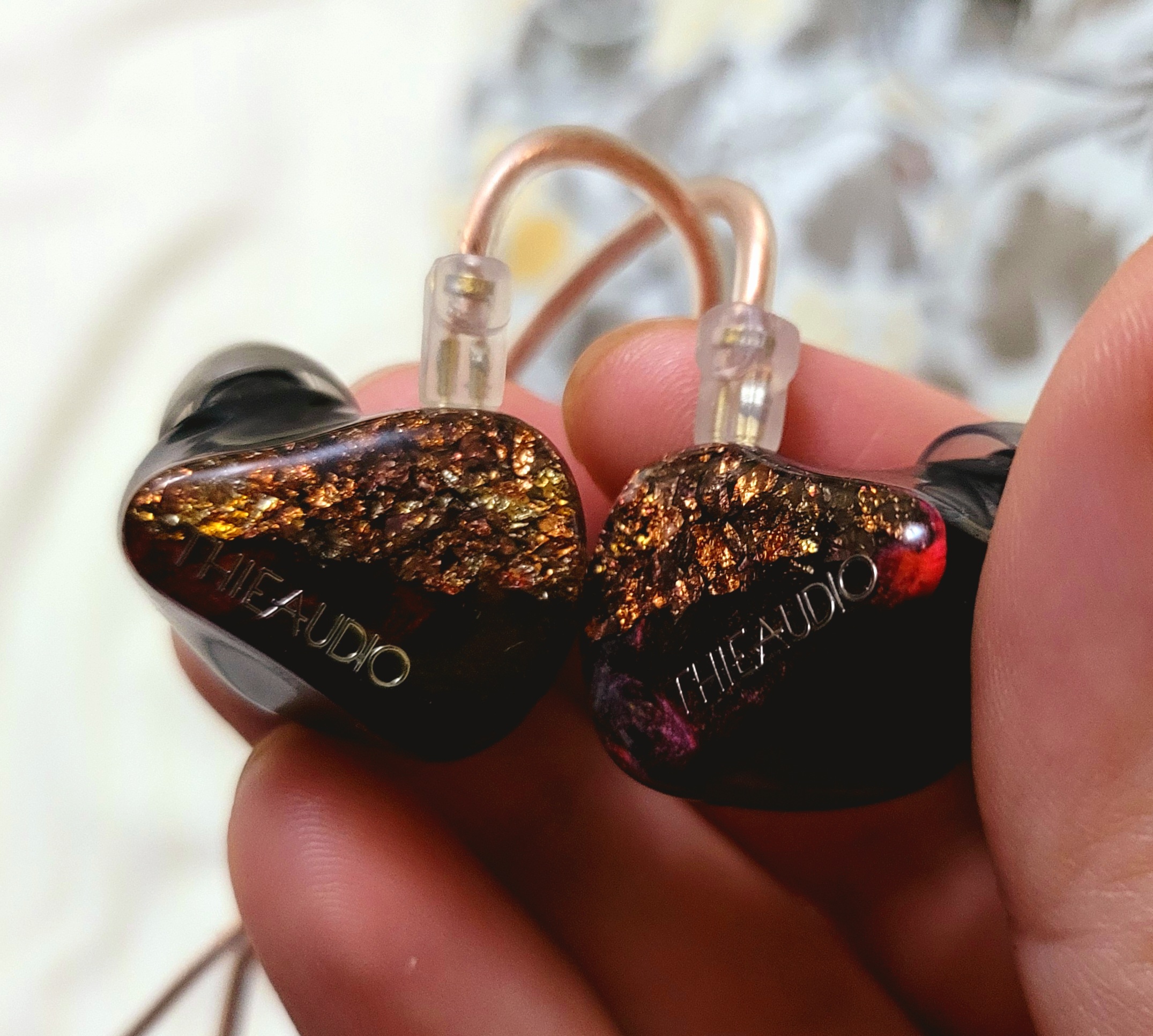 I got alot to compare it to if needed. 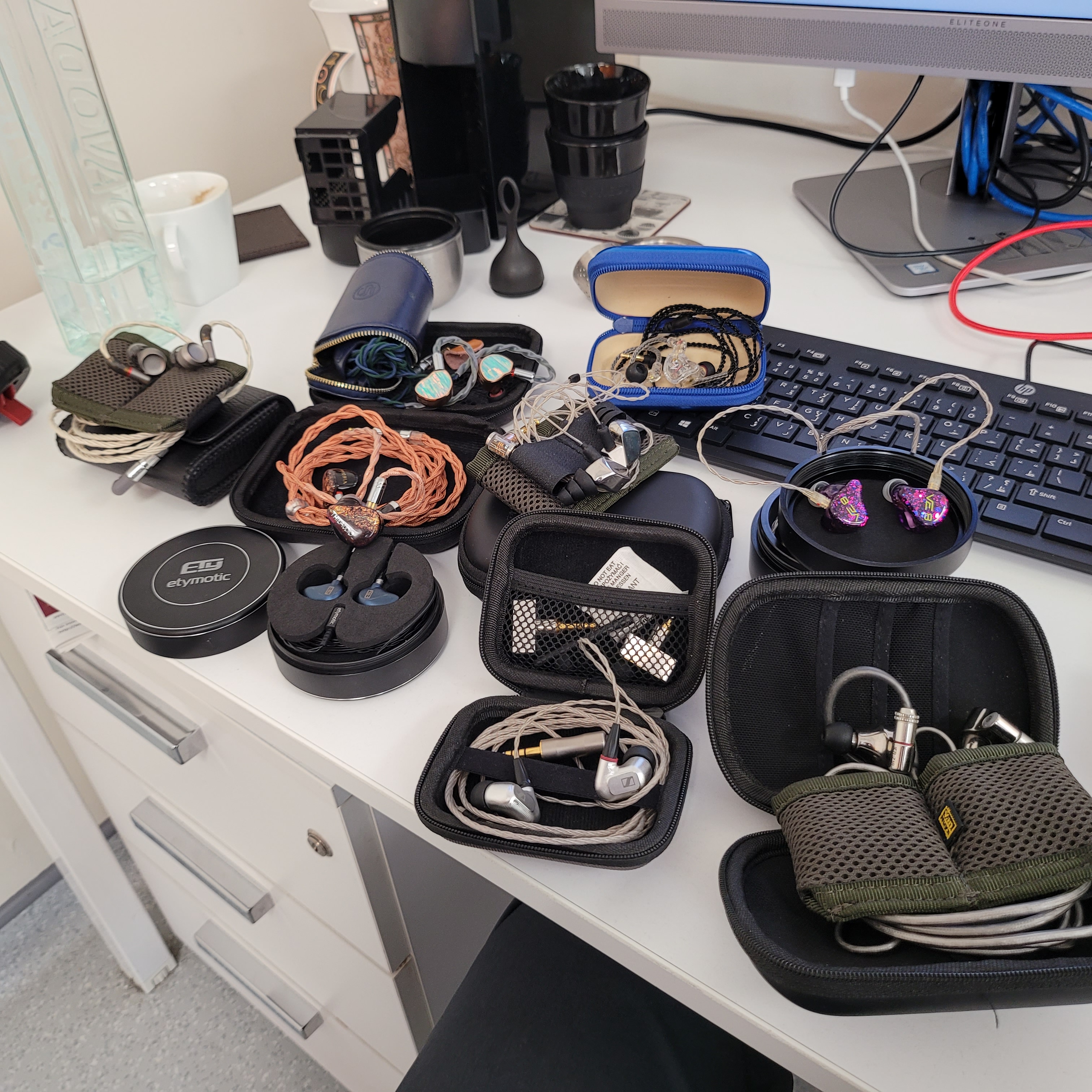 My Final Audio a8000 is of similar presentation for a comparison. But that is a single driver iem. It has the same forward presentation as the v16, but A8000 less treble zing, but more vocal sibilance. Less of a bass shelf than v16; polite bass that is still warmish sheved; V16 more wet presenting. Similar midbass punch between v16/a8000, but a8000 is less bass overall.

Sony Ier-z1r, this is definitely is of same tier of an iem. But too different to use-case scenario. But both these iems have a similar zing & sizzle to treble presentation. Ier-z1r a step back in staging, much less forward.

The Sennheiser ie900 is also a very different target fr. But like I said before, the ie900 has rounded notes and especially the rounded mid-bass notes are class-leading. V16 is drier punch in comparison, but very competent. Way more details are masked on the ie900, ie900 is less resolution.

Simphonio VR1. All in perfect clean balance, other than treble extension. Has a similar bass shelf to Final A8000. Low shelved, but very good bass timbre; less bass than the v16. Much less forward than V16; especially in vocals. Simphonio VR1 has less air and would need a treble EQ shelf to compete against V16. Simphonio sound great out of box without EQ though. Truly an organic sounding jack of all trades from a single-dd. Dunu Luna can be so too, but needs EQ to get it there; Luna will have extras aspects to its presentation like its small driver excursion. Amazing how effortless the Simphonio vr1 sounds; such a big driver needing less excursion.

The Dunu Luna might be relatable for a v16 comparison (but Luna is a single-dd iem). Nothing gets masked in the mids on the Dunu Luna. Bass is notn as rounded as ie900 unless EQ'd. The Luna has a similar shouty forwardness look v16, but Dunu Luna is too polite in lower treble without EQ. Not metallic feeling in treble at all until EQ'd.

Vision Ears VE8, is very source dependent with its impedance swings. With my ibasso dap VE8 has a more pleasant midbass than v16, but less subbass. Ve8 mids quite pleasant are more masked than the v16. Everything on the ve8 feels less resolution than the V16. Everything feels a step more tamed on thr VE8 than the V16's intensity. The ve8 sounds equally as pleasant to listen too than the v16; ve8 has a step less forward vocals, a step less forward upper-mids, a step less forward treble. It's just more tamed, less intense, but less resolving; you can listen to the ve8 no matter your mood. No matter how tired you feel. V16 will give you all the details and you may feel it to forward presenting when you just want to relax.

Important points:
Ie900 midbass punch better than ier-z1r & others. Much more rounded and heartbeat like.

Ier-z1r has a forward subbass but it's distracting; it doesn't fit in organically to me. (This can be tamed with silicone tips that don't vibrate from being so thin). But very similar shimmer treble presentation to V16.

V16 better than both in "wet" bass presentation in my opinion. As in, V16 got a better subbass profile.
Last edited: Jan 15, 2022
Reactions: MusicSat, Makahl, Max spl and 5 others
V
vasix
For such expensive IEMs the presentation should be better! Why are you wearing a mask? Don't expect the headphones to sneeze

MusicSat
Thank you!
I have the Monarch Mk 2 - I love it - I wonder how they compare and if this one is technically superior without sacrificing the Monarch's dynamic timbre...