Pros: Detail, clarity, mids that grab attention. smoother treble
Cons: Bass is detailed but lacks body and impact, soundstage is a bit closed in for open phone(fixed with mids)
First of I have been using the DT 990 pros and a soundMagic HP100 for a while now at least 4 months. I have had time to break both in and happened to think both did what they did great. The HP100's got sold though because at the time I needed the funds being out of a work with health issues. It wasn't that I like the HP 100 less but more of the fact that the DT 990 was a gift from my girl. That left me with one headphonethat I was listening with and for the most part I was happy have a couple of DACs to toy with and a couple amps to pair and see what sounded best.

I found the HD595s used(but very lightly used) for a great price, and at this point I knew I had to check into them because I have mixed reviews. I started talking to the guy that was selling these and realized I am going to go for it because I  wanted to try a Sennheiser Headphone. I was originally looking at the HD 580 but new that was never going ot happen right now alas I am still out of work. I went through with the buy and they arrived after the weekend, and after pairing them with the CDAC+ and Vali amp....they sounded like many people wrote laid back, clear, shining in the mids, sound stage not as big as some open headphones and more to the forward like standing a couple rows from the stage, and finally not much bass impact. All in all a good headphone especially for someone coming into better audio gear. I took more time because this headphone has not been burned in much, and it did open up a bit more and get more musical than the initial listening. I would say that I would they are not as enjoyable as my DT 990 pros, but that is purely preference, but what they did seem to excel at was classical, instrumental, and folk/acoustic.

I had read there was a mod to do with the little brother of this headphone for opening sound stage and increase bass response I believe. Now I checked out a couple threads and after videos to see if my amateur hands were capable. Thankfully the mod is relatively easy if you have worked with any kind of gadget that need basic screw driver, and in my case wire cutt/ pliers. The one bad thing about this mod before doing it is that it is irreversible...so if you do not like the changes you are out of luck. I read reviews on how the mod had sounded for the HD595, and after I felt confident enough with the responses I gathered my tools. The next section will be a more detailed reviewing of the HD595 with the mod accomplished and I am sorry if this is the wroing place to review it, but I did not know where else to. So here is my impressions after 24 hours...

The mod was basic and the only real hardship through the whole process was removing the plastic internal grill that is under the drivers. Once I had completed then reassembled the headphones I sat down and did some more serious listening. Now as far as sources go I used Foobar2000 and Mediamonkey with using 24/96khz flac and 16/44.1 flacs... so nothing to scoff at. This was also listened via CDAC+(improved isolation, and separate psu for ODAC) and the Schiit Vali, and then again on the Fostex HP-A3 using both internal amp and Vali. I must say I was surprised to hear such a difference immediately afterwards and that I can definitely say that the stage spread out a bit, and while opening up became more clear and placing the instruments was more distinct. I was kind blown away because though the sound stage was not as wide as my DT990s it may have been more deep and the sound more clear. Now I put on different types of music, from classical, to instrumental, progressive rock, indie/alternative, hip hop, and binaural+ tracks as well. And honestly every artist I listened to from Arcade fire, to radiohead, to pink floyd, to Aesop rock, to Adele sounded good.  I did not have to eq any of the lower frequencies which was a nice change because I do have to apply eq to the higher frequencies with the DT990s on some tracks after the 2k range.

I actually had my girl who is not a enthusiast by any means, but more so one of the most honest unbiased people I know, and she actually just started realizing things such as burn in which I never told her about. She brought it up about a month or so after she bought her headphone, she looks back at me and goes " babe I know this is going to sound silling and maybe a bit strange but I swear my headphone sounds better than before . Like maybe something is wrong with my hearing" I just started chuckling and got a stern grimace of "what the hell" from her.
Welll I had her listen to the headphones prior and she did not care for them that much being  more of fun headphone lover, and I had her sit down and really listen, and immediately she said she could hear where everything better and it does not sound so close. She then after some more serious listening  said she prefers CDAC+ and Vali with this unit and that she feels like she can move more to the music than before not understanding why, I then explained I had removed the inner cloth and grills.

So main story is I absolutely still love and enjoy my DT 990s but now I do not have any reservations about buying the HD595. I do not know if it just placebo that I am noticing difference, but after to bringing my girl into listen i highly doubt it. I think most people out there prefer the HD598, HD600, HD650...well understandable I actaully want a HD600. If though you are like me, and on a budget you can find this hp normally on ebay for around 100-120$, and if you keep an eye out you can get them for below 100$ like I did.  I have actually been listening to the HD595s ever since this mod and I do not regret buying them because I really believe they are a great pairing in contrast with the DT 990 pros. I know this is not my best review and impressions but I hope someone finds it useful. 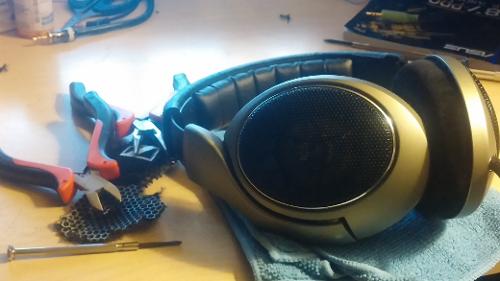 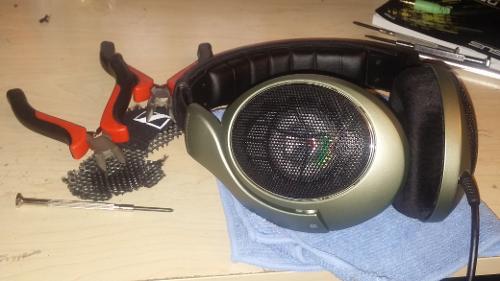 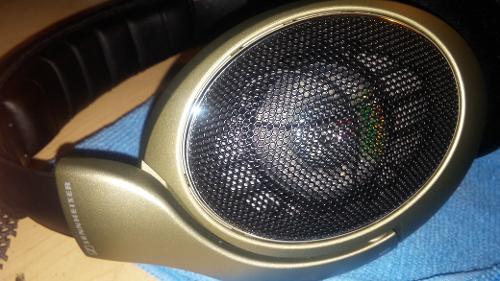 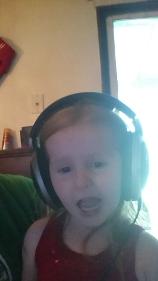 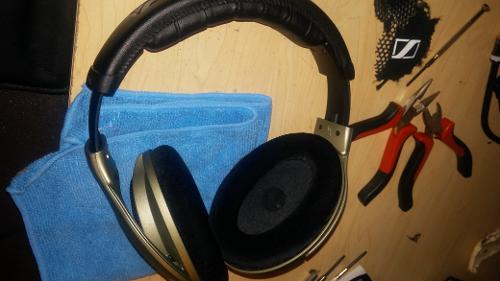 My daughter likes them quite a bit...hah.

These are some photos of the HD595s and how they look, and plastic build put aside I happen to think these are great looking headphones. Also, I like the way the driver looks showing through the grill like this, because it kind of gives it a cool and unique look.
Pros: Polite headphones
Cons: Lacking bass
Only 3 headphones in my collection are better thank HD595: AKG-Q701, HD600, HD650.

Compared to HD595 For sound AKG-Q701 is a superior buy for the price. It has good comfort and decent fit and finish.

All open Senn headphones have Superior comfort, fit and finish. Althought the HD595 is a step down in sound from the AKG-Q701 it has everything else beat.

xtitan1
I have not heard a better system than the one I currently have (budget reasons, but am attending a meet soon!).

I am using HD 595s with a uDac 2 and I agree that they lacking bass. I also have had issues with sibilance. Who knows if this is the phones or something else in my chain.

I equalize, and with a boost to the low end and a dip at 8K, both of these problems are solved to my satisfaction. Again, maybe this isn't valuable since I may not know what I'm missing

However, I CAN talk about the comfort of these headphones. I have had these for about 4 years. I am so used to wearing them that I put them on when I'm at the computer regardless of whether I'm listening to something or not. They go around year and rest on your head instead of resting on your ear, and I can (and have) worn them for 24 hours straight. They're amazing in this regard.
Pros: Supreme comfort, supreme long-term listening, works with most music, easily amped by common sources
Cons: A little too "repressed" for rock n' roll, atrocious 1/4 to 1/8 adapter
I've owned these Senns for over 3 years, and don't plan on getting rid of them either, even having bought an audibly superior set of phones from a competitor. Hopefully that says a lot - these are too good to just abandon, but not quite good enough to have satisfied me til death do us part. I have discovered that they fare even better with a quality Amp/DAC solution, which was a nice surprise. With better equipment, they certainly hold their own against my HE-400s, and call the value of the extra-costs of buying the HE-400s into question. But, without question, their performance has some limits which coaxed me to finally  move on.

I find these phones to be extremely enjoyable for low-moderate volume listening and long wearing periods. They are very comfortable, light, and the 1-sided cord doesn't get in the way often.

The design is tasteful. The headband and velour pads are soft, supportive, and overall a sense of quality is conveyed. The cups adjust to your head 'automatically', though I have noticed that positioning has an effect on the overall sound - it is easy to fall in and out of the 'sweet spot'. Stock cord includes a 1/4 inch plug, which should have been a 1/8 since I've never in my life used them with something that had such a jack. The adapter sucks - put it on and you have a stiff 4 inch long plug hanging precariously off your laptop, phone, Mp3 player, or computer. I was too cheap to replace this, and luckily no accidents so far. I never cared for the color scheme, which is somewhat too drab for me. But these are light, comfortable, and have proved durable. Minimal signs of wear in the years I've had them, and absolutely no issues.

Sound quality is superb across a wide-range of music formats, with a very detailed sound, fairly textured bass, good vocals, and a slightly forward (but polite) treble response. I think the sound is best at low-mid levels, as they can seem a little too forward and "fall apart" a bit at high volumes. They otherwise have a nice punchy mid bass with most music, and a slightly aggressive presentation which is more spacious than most other phones I've tried. They are well balanced, and the sound is generally never fatiguing if volume levels are kept in check. They are excellent for very-long listening sessions. I can't recommend them for rock and metal, as they are a little too laid-back to make those their best formats. I can't recommend them for "bass heads", as these cans are geared more toward those who appreciate a balanced presentation.

These are an excellent choice for those who want to experience a high end sound at a reasonable price, and who want to avoid investing in expensive audio equipment to enjoy them. As a result of owning these, I would not hesitate to purchase other higher-end Sennheiser product. I would simply be cautious about choosing among them, as I like headphones that presents modern rock, pop, and metal in a more transparent and energized fashion, and Sennheiser seems to err on 'comfort' over exitement.

XxDobermanxX
Good review, did you know this was a standard for halo competitive gaming?