The first practical and portable DAC/amp to provide a direct-digital connection to your iPod touch, iPhone, or iPad, the DAC-HA200 brings high-resolution D/A conversion and premium Onkyo amplification to all the headphones in your collection. As well as connecting Lightning-equipped iOS devices, the USB-A input supports AOA 2.0-compliant Android devices for CD-quality sound, while a USB Micro-B input links to PC and Mac. When connected via USB, your DAC-HA200 offers free access to the Onkyo HD Player Pack app, allowing you to load your iOS device with 96/24 and 5.6 MHz DSD albums and to personalize the sound with a 16,384-band equalizer. The compact aluminum amp is loaded with proven technology, including a Burr-Brown PCM5102 D/A converter, MUSES 8920 op-amp, and a discrete Class AB push-pull output stage. As you would expect from a company that's been handcrafting hi-fi equipment since 1946, audio performance is extraordinarily vital, energetic, and engaging on headphones of any kind. In your pocket or on the desktop, the DAC-HA200 is a must-have for any music lover that's serious about discovering how good a portable setup can sound.
Share:
Facebook Twitter Reddit Pinterest Tumblr WhatsApp Email Link

Pros: Sleek, well built, portable, powerful.
Cons: Battery charging can't be disabled. Not for trebleheads.
Prior to purchasing one of these I was surprised to find there were no reviews on Head-Fi. There are a couple for the Teac HA-P50, which is almost identical apart from the paint job and opamp used. On paper the Teac has a little more grunt.

Anyway I thought I'd have a stab so here goes.

I can't abide weak, flabby or poor quality bass and enjoy bass driven music and a reasonably high SPL (Sound Pressure Level). More basshead than treblehead so bear that in mind. Not so much into screaming guitars these days but still favour power blues occasionally.

My desktop (actually coffee table top) rig is a Pro-Ject DAC Box S USB and Head Box S combo. I don't bother using a PC at home so 99% of my music is streamed from my phone, either via OTG USB or more often from a wifi blu ray player hooked up using a digital coaxial cable. Occasionally I'll watch music videos with the sound finding its way to the DAC by way of an optical cable from the satellite tv box.

The DAC-HA200 (HA200) is an attractive unit in my view, and build quality is excellent. Feels solid, but not too big or heavy and has rubber rails on both sides to prevent scratching. The volume knob is nicely protected and operates smoothly with good resistance.

Charging can take up to 8 hours apparently. I only had to wait a couple before the blue charging light winked off to indicate it was done. The charging cable is not very long and needs a USB port for juice. I found you can use the unit while it is charging and it will also charge your phone too using the USB to micro USB cable provided. Initially I used an OTG USB adapter and in this configuration the phone will charge the dac/amp unless it's plugged in. Since I bought it for portable duties ideally the unit would have an option to switch off battery charging either way. I suppose you could switch between the USB and micro USB inputs depending on which device needed power the most, but I'll just be using the cable provided which is plug and play once the switch is set to USB. As mentioned there is also a micro USB input but there's also a mini optical jack which is a little unusual. I didn't even know about these. Might try hooking it up to the optical out of the satellite tv box one day.

Comes with a couple of rubber bands for performing a strapadectomy to your phone or DAP.

There's an Onkyo app I might use if I ever track down some high resolution (Hi Res) material. Thus far I haven't bothered despite Sony's best efforts (I really like Sony, so much great kit back in the '80's, but where did it all go wrong?). One reason I don't think Hi Res is what's missing in my life is I didn't really notice any difference switching back to Spotify after a few months with Jay Z's finest flac from Tidal HiFi.

Initially I was concerned that on high gain the volume knob was up around two to three o'clock to get a SPL similar to what I'm used to. Then I realised I hadn't maxed the volume on my phone and so it dropped back to around 11am. Both my cans are low impedance with the Denon requiring a bit more power than the little SMS bass cannons.

Anyway cutting to the chase I'm very impressed with the signal the Onkyo pushes. Quite a powerful and dynamic sound, which I didn't think was possible from a battery powered unit, based on my experience with the FiiO E07k.

It is warmer and a tiny bit thicker, slower and darker than my desktop rig, with potent, nicely textured and accurate bass, which is pretty well controlled. No one note rubbish or reverb here. Probably a bit much for some, but bassheads will rejoice and I really don't think it's overdone. There's no bass boost button, but it doesn't need one as the power and headroom on tap allow it to get a death grip on my cans at least. Others will need to determine whether it has the grunt to get the best from medium and high impedance 'phones.

Midrange is sweet, neither recessed nor forward. Possibly a touch overshadowed by the muscular bass, but it's fine by me. A bit congested compared to the Pro-Ject gear and a touch less transparent.

Treble is smooth, but nicely detailed. The HA200 tames much of the demon treble on the Denon thank goodness. The super sized and super comfy AH-D600 isn't burned in yet so hopefully it will sort itself out (edit: it hasn't) otherwise it'll join the growing ranks of headphones cut from the crew for not cutting the mustard. The ATH A500X, ATH PRO700MK2, and PSB M4U1 spring to mind. Regrets, I've had a few. Overall the higher frequencies seem well executed and integrated to me, but some may prefer more extension and/or sparkle.

Soundstage is pretty good, wide enough if not so deep (Edit: depth is not too bad). Imaging and instrument seperation are also solid. The Pro-Ject set up yeilds a cleaner, more neutral, spacious and open presentation, but there's really not a lot in it. To use a boxing analogy it's a victory on points rather than a knockout between these two middleweights, both armed with Texas Instruments dac chips (Edit: To be more specific, the authority and deeper well of headroom from the dedicated Pro-Ject amp outpoint the Onkyo).

I think the Onkyo DAC-HA200 is a great little dac/amp for portable, office or even home use. Basshead approved (although my basshead membership is looking a little shaky and could be revoked for selling the earth shaking, you can find me in da club MDR XB950BT). To continue the analogy above I reckon it punches above its weight. 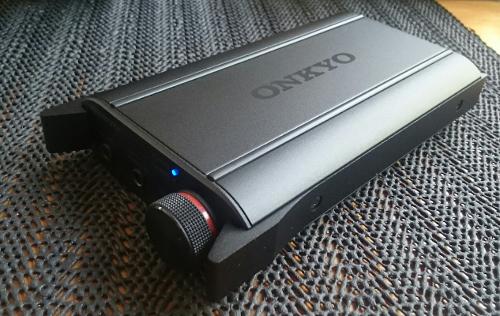 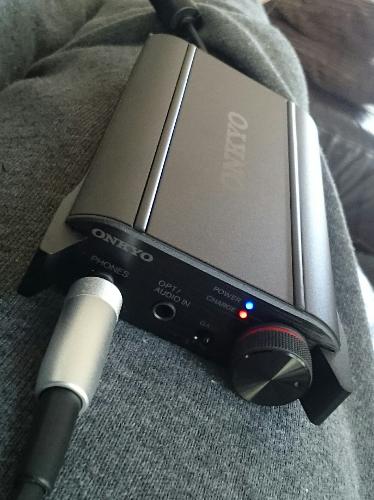 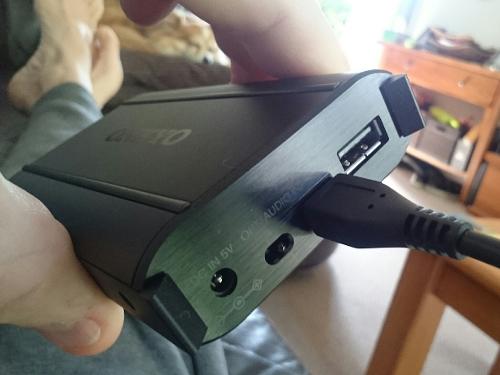 Vero Golf Champ
rolli1949 I haven't used a Geek Out or even read much but they look powerful. The Onkyo has more functionality in that it has a battery.

unityplanet
guys, is it better sound and internal stuffing than TEAC DAC HA-P50?

nunovpc
Right now i am between Topping NX4DSD vs Xduoo xd-05 vs Onkyo DAC-HA200 .
Any thoughs on them guys?
Read more…