Pros: Comfortable, Bluetooth connectivity issues have been fixed, Secure when running or doing vigorous workouts, built-in 5-band parametric equalizer
Cons: Supports only SBC (no AAC or AptX), no multipoint connections (only one connected device at a time), no volume controls, noticeable latency in videos (especially the YouTube app) 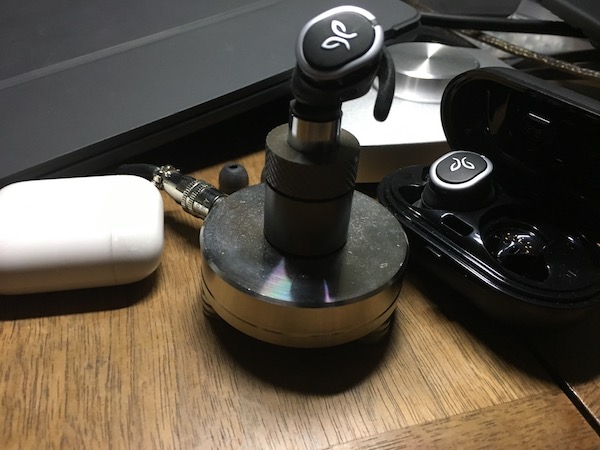 The prices of these things have been fluctuating at Amazon. I asked Best Buy to match the price when it was down to $135. Early reviews were pretty negative because of Bluetooth connectivity problems. I guess they’ve had some time to make fixes with firmware updates. There haven’t been any connection problems for me, so far.

The earpieces stay put when I’m running. That’s what they were designed for, after all. Also, there hasn’t been a problem with jerky movements like cleans, snatches, burpees, and box jumps. I haven’t tried them with handstand pushups, which is when the Airpods fail to stay in. The Jaybird Freedom F5 passes all of these tests. (I wear them with the cord over the ear and then wrapped snugly behind the head. They’re now also cheaper: $50-$56 as of this writing.)

Some annoying things (compared to the F5 or X3): No multipoint connections, so it can’t connect to two devices at the same time. Also, no volume controls.


About the sound quality… 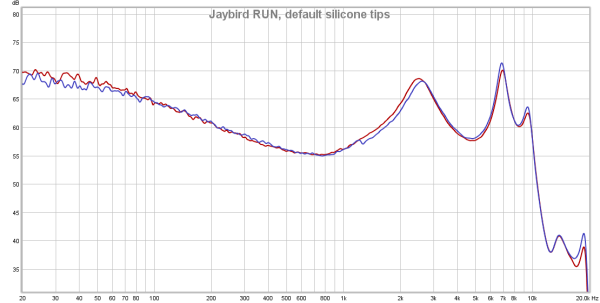 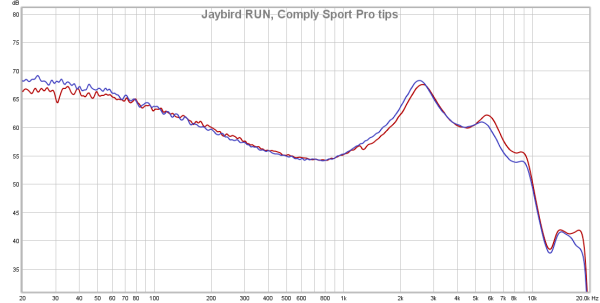 Frequency response with Comply Sport Pro tips for Jaybird IEMs​
With the Comply Sport Pro tips, the resonances between 6 kHz and 10 kHz are more damped, so it’s easier to EQ with the MySound app’s 5-band parametric equalizer. Even then, the app is so fiddly and it’s really tricky to dial-in the desired sound. A measurement rig helps. My complaint from day 1 with the X3 and the Freedom F5 has been the same: there is no indication in MySound as to where you’re placing the EQ’s peak, or how many dB is the adjustment. The frequency markings on the horizontal axis don’t really help that much.

Eventually, I was able come up with an EQ preset that makes the response less V shaped, which is my preference: 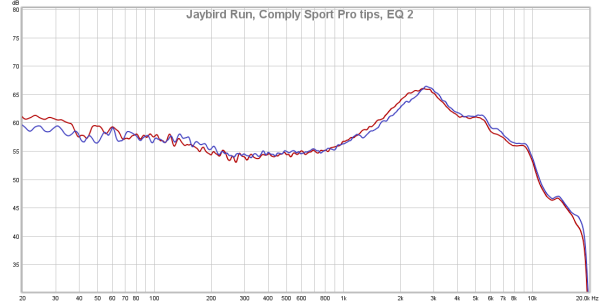 Jaybird Run frequency response with Comply Sport Pro tips and EQ​
I much prefer this user-defined preset, which is a good starting point for further adjustments. It seems to be somewhere between DF and Harman. When I program the same response on the Freedom F5 and the X3, the result sounds damn good—to my ears at least. But then again, my tastes may be unusual. I wouldn’t necessarily recommend this EQ preset to anyone else: 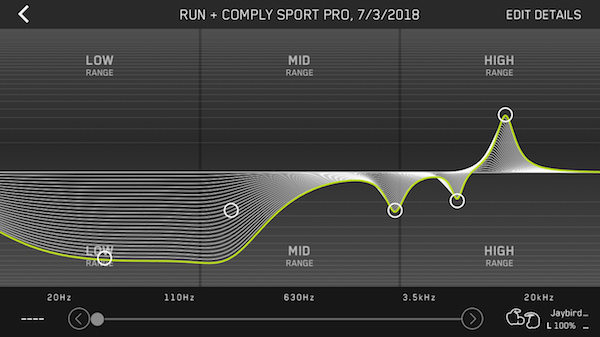 Jaybird MySound app in iOS with custom EQ.​
In principle, I’m against making large boosts like the one in the treble. But after flipping back and forth between having it and not, I decided that I like the sound better on the F5 and X3 with the peak left in. It looks like 5-6 dB. Maybe I’ll change my mind later. In case you were wondering, the IEMs remember the EQ preset even after powering off, and they're automatically applied to every connected device, even if that device doesn't run the MySound app.

Here’s the problem with the Jaybird Run: While the resulting frequency balance is very close to my preference, the result doesn’t sound nearly as good as it does on the Freedom F5 and the X3. The boosted treble only seems to expose the problem even more. What happens is that cymbals and high hats sound broken up, like crinkling cellophane wrappers. On the F5 and X3, they sound just fine—with a gentle and delicate shimmer, when it needs it.

It’s not just high-frequency content that’s affected: Long sustained vocal notes sometimes have a slight warbling sound with a crackling edge and a surrounding echo-like haze. The F5 and X3 don’t sound like this at all.

On the Jaybird Run’s product page, the specs show that it plays with more distortion than the F5 or X3. But there’s a more serious problem: AAC is not listed as a supported codec—only SBC. Indeed, what I’ve been hearing reminds me of low-bitrate MP3 lossy compression artifacts from a long, long time ago.

Before anyone calls me out on it, I must emphasize that these differences are slight. I didn't notice when I was doing my workouts. It wasn't until I got home and started to pay close attention with more quiet surroundings that I noticed anything. Even then, the easiest person to fool is yourself. There could be confirmation bias at work here. Also, it's really difficult to conduct a proper double-blind test with two different devices with different codecs.

Also, if there is, indeed an audible difference, I don't want to jump to conclusions that the codec is really to blame. In any case, I decided to investigate further with the Bluetooth Explorer for MacOS utility (available if you download Additional tools for Xcode).

Bluetooth Explorer on MacOS
You can enable AAC for Mac: 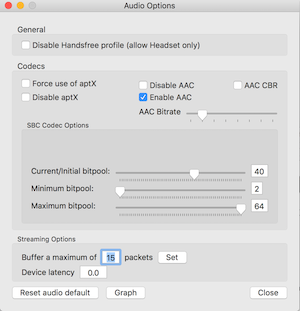 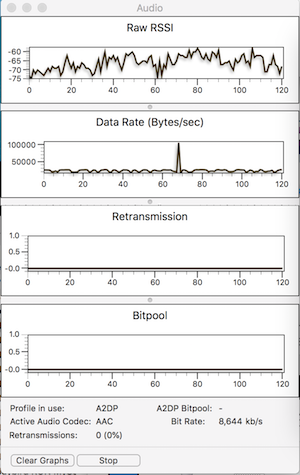 Jaybird Freedom F5 AAC on Mac​
The Jaybird Run uses SBC even if AAC is enabled. And it has the same audible artifacts on the Mac that it has on the iPhone: 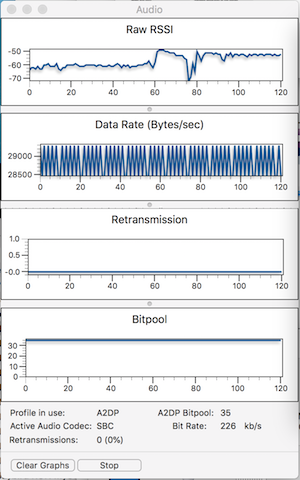 Jaybird Run SBC on Mac, 226 kb/s​
It's 226 kbps SBC even when AAC is enabled. You'd think it ought to be fine, because well-encoded MP3 sounds ok at that bit rate. If the problem is really with the codec, then maybe SBC doesn't render as well. In any case, it's not using the maximum rate of 328 kbps.

The Freedom F5 manages a slightly better data rate with SBC when AAC is disabled: 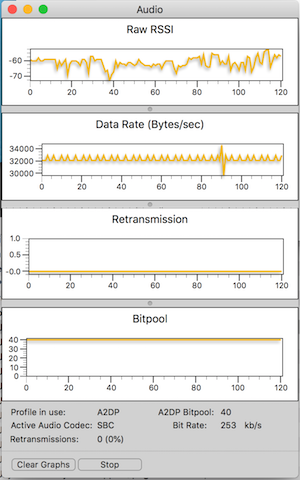 The competition
I’m currently evaluating the Jabra Elite 65t, which seems to be the Jaybird Run's main competition. They came out a few months after the Run, but look at the 65t’s advantages: AAC, multipoint connections, volume controls, Bluetooth 5.0 (vs 4.2), and a more sophisticated microphone system for better call quality and the ability to allow some outside sound to come in. Plus, it has lower measured distortion (at rtings.com). 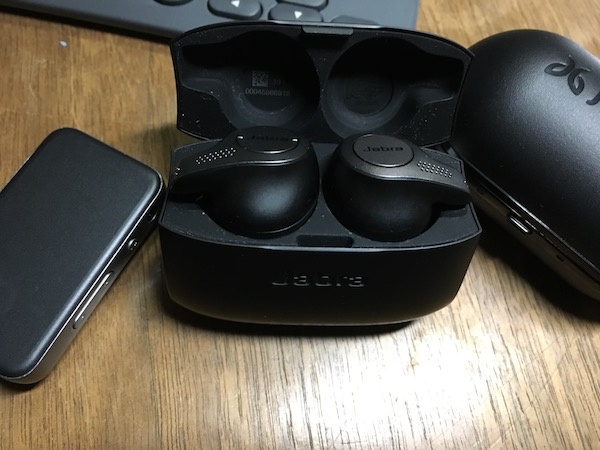 The Jabra Elite 65t​
The Jabra app’s EQ isn’t as flexible as MySound, but maybe the 65t won’t need as much adjustment. The default frequency response is better. It’s also something that could be improved with a future firmware and app update.

Conclusion?
If you’re on head-fi, you’re picky about sound quality. So if you haven’t bought the Jaybird Run yet, maybe wait for v2.0? Or try it and make sure the store has a good return policy. Maybe it will fit your needs. As usual, YMMV. In any case, I hope Jaybird address all of the issues I wrote about above.
Reactions: howdy
Read more…