HIFIMAN HE1000se - Winner of 3 month search for TOTL Headphone
Pros: * Best in class detail and seperation
* Timbre and tonality
* Comfort and long session wearability
* Sounds great with a DAP and scales well with great home amp
Cons: * cables not in line with class of product
* case not as good as other in same class of headphone
HiFiman HE 1000 SE Review

when the Senn 650 and Grado RS-1 were the top in production headphones (for the most part). Yes we had the R10, K1000, Qualia and various Audio Technica woodies and L3k but for the most part they were limited in availability.

Today we are in a golden age (prices withstanding) of top end headphones, almost an embarrassment of riches. This was my starting point for a 3 month journey to find my best headphone based on all the new great options that are available today.

This journey started earlier this year with me pitting several high end headphones in a steel cage match against the Focal Utopia I purchased in 2018.

I had these headphones in house over the past 3 months the ZMF Verite Closed, Heddphone, Rosson Audio RAD-0, Meze Empyrean and RAAL SR1A and now the HiFIman HE 1000SE.

I was able to arrange a loaner for the Heddphone , Meze Empyrean and HE1000se. The Rosson, RAAL and ZMF these were purchased by me. I have not been paid or been given any incentive for a positive review from any of these companies.

My musical preferences and sonic objectives.

I am mainly focused on Rock from classic rock through modern rock and Jazz with Jazz I am more focused on what I consider to be the classic era 1958 to about 1965 but I listen to jazz/rock and current jazz as well.

I prefer headphones with a realistic timbre, even frequency response, separation/detail and dynamics. This is a hard group to get right and there are times I’ve given up stage for timbre or detail. My headphone benchmark is the Focal Utopia as this has been my go for the past few years and I have considered this a great all rounder headphone.

The winner of this match up also needed to be able to allow me to melt into the music and disengage my thinking brain and just let me enjoy the music. Some headphones are toe tappers or cause more of an emotional response than others. There are some cans that may create an instant WOW factor but over time become fatuguing or are all sizzle and no steak. 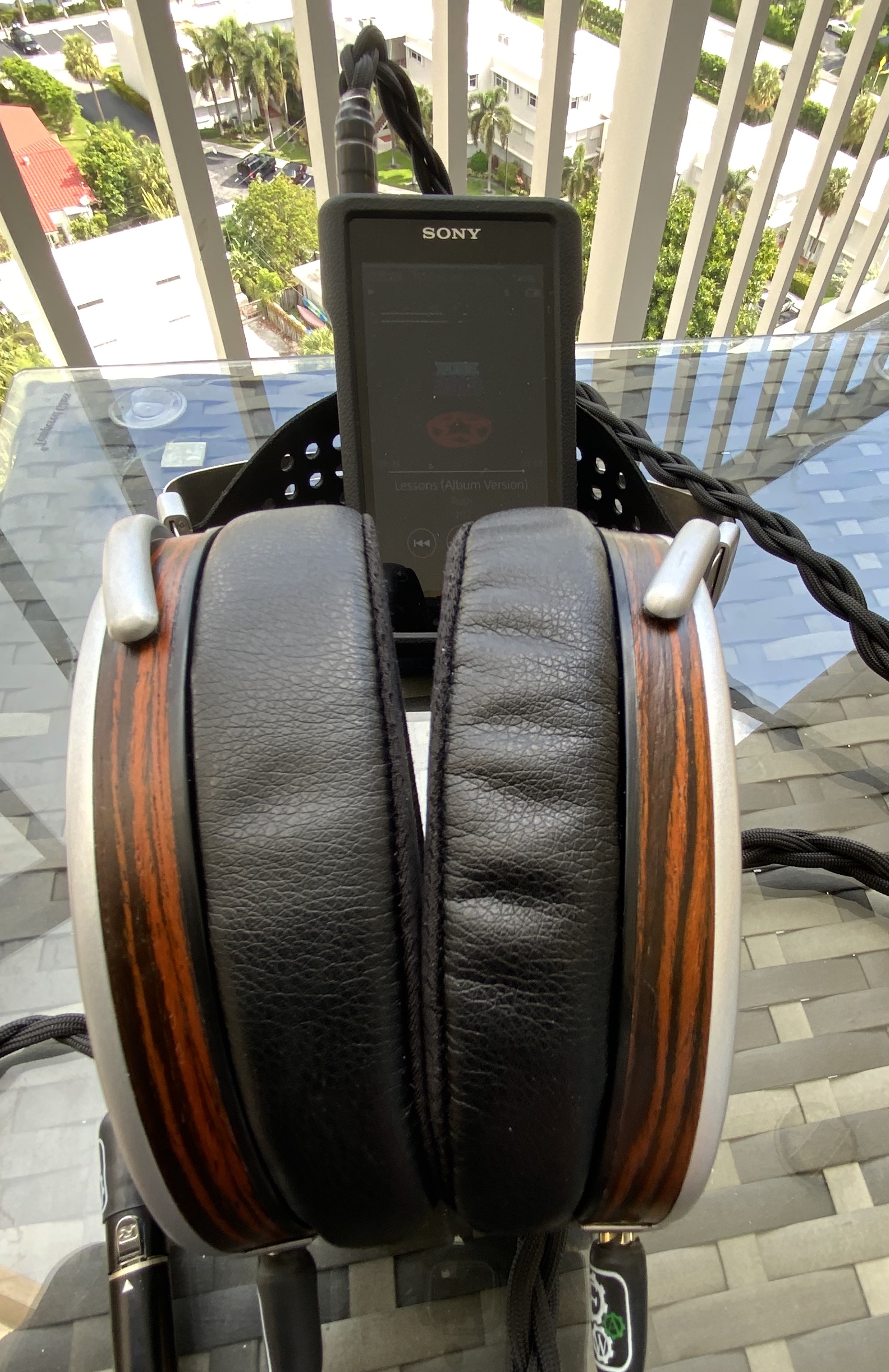 Opening the package, there is a nice presentation box, three cables XLR, 1/4 and 1/8. The cables function well and are light and flexible but do not match the high end space these headphones play in. They seem rubbery and almost like hospital latex. That said the cables sounded great and other than aesthetics did not hamper my enjoyment of these headphones.


There is a nice booklet and the while the presentation box is nice, I greatly prefer the flight case style boxes the Meze, Rosson or RAAL come in. While in the time of COVID we don’t travel with our gear I am hopeful to be sharing gear with friends in the future and travel cases are great for this purpose. again not a reason to buy or not buy a headphone as you can fashion any number of alternative cases. The headphones look great and are a nice mix of wood, steel, synthetics.

Comfort : These were amongst the more comfortable headphones I have had at the house and maybe only bested by the Meze and maybe just slightly ahead of the Utopia although the Utopia exuded slightly more high end visual build appeal.


These are easily adjustable and it easy to see where you are with clicks and visual holes on both sides of the headphone. I really like the (p)leather and velour mix of the pads as velour is pretty comfortable and doesn’t get as sweaty as leather can. They also felt light on the head at just under a pound long sessions are a breeze with them. They also grip just enough to stay put if I move around or lay down. 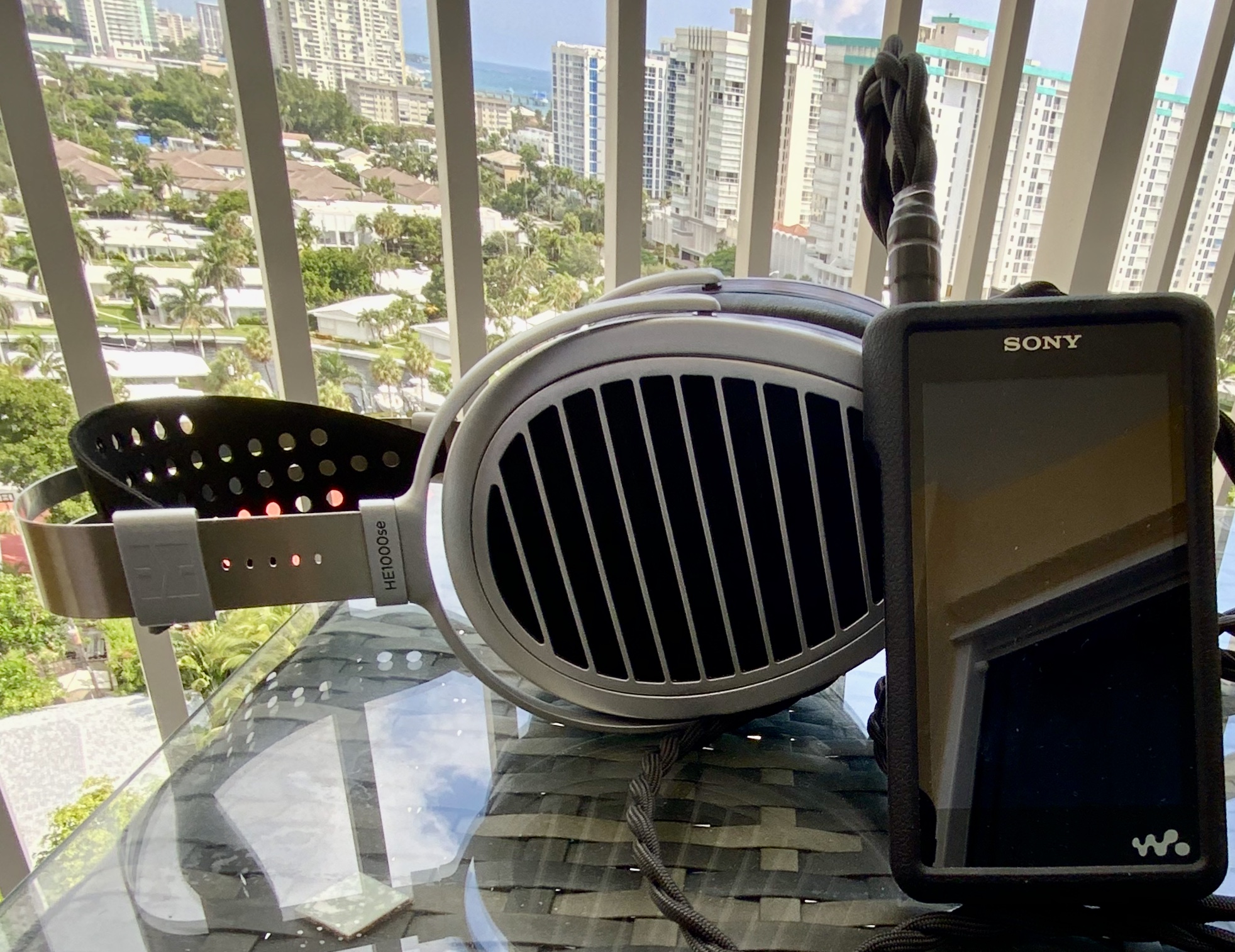 Stevie Ray Vaughn “Tin Pan Alley” - Wow the bass and drums on the opening of this track are just outstanding. There is plenty of weight to the rhythm section and dynamics of the Tom and snare hits are first rate. Stevie’s voice comes in with very natural tone a smokey and weary tone . Feeling the the dynamics are a stand out of this track just you get relaxed Stevie rakes his strings and it pops you up! Timbre is great and the sound is one of you being in the studio based on the realistic tonal representation across the vocals, guitar, bass and drums. The macro and micro dynamics are very good as well.


Marvin Gaye “What’s Going On”
There is a fair amount of instrumentation on this track and the HE 1000se did a great job presenting each instrument without losing the pacing and rhythm of the track. James Jamerson’s bass track is a monster on this and is easy to follow the bass melody he laid down. With some cans the rhythm of the bass is present but pitch is not always clearly defined not the case with these. It was fun to pull out the multitudes of vocals on this track. These also passed the foot tap test. Many headphones play music with great technicality but lose the emotional connection of the music the HE1000 had my head bouncing and foot tapping!

Led Zeppelin “Song Remains the Same” “RainSong”I chose this track due to the layers of guitar Jimmy Page laid down. It was a blast picking up the all the different part in the right and left channel with the dominate part in the center. The headphones really do a nice job with Plant’s vocals that are just bordering on sibilants and were sped up post recording for effect. I couldn’t help myself and rocked out to Rain Song as well. The guitars sounded so real and wet with the vocals having a spooky presence. The mellotron which does the string instrument sounds is presented with a richness that evokes emotion.

These headphones have a great quality that allows you to pick apart the mix if you like or just let the whole wash over you.

Steely Dan “Aja” This is a great song Steve Gadd on drums on this one just kills it. It was a joy following his drum solo on the outro the HE1000 did a great job laying this out. Vocals and keys sounded rich totally but representative of how this record sounds on top flight speaker systems I have heard this LP on.

Nice sense of space on this recording, Larry's guitar tone is well reproduced his super clean playing is just so much fun on this classic tune. The tone of the organ is wonderful with that slight hair on the tone from a great organ sound.

Hopefully this gives you a taste of how much I enjoyed these based on impressions on some of my favorite songs.


Treble - extremely well defined with plenty of texture. Cymbals shimmer and don’t come off as harsh or one dimensional like with some lesser cans. You hear the hit and get a great sense of stick placement on the cymbal along with nice decay. Not he kind of cup induced reverb decay some closed headphones can give just a very natural sound of what’s on the tape. Upper register piano strikes were well represented and were hard and jarring when the musician played it that way but I never got a sense the HE1000 was putting its thumb on the scale when presenting the the music.

Midrange - nice and neutral, instruments and vocals just sound right. Vocals both male and female sounded natural, this can be a challenge for many headphones. Vanessa Fernandez was a real treat with these, if you get a chance pick up her past two records! I play a bit of guitar and I thought the guitar tones were really natural, picking dynamics were well represented.

Bass - this is part of the review that I question myself as bass can be tricky for me. I tend to choose quality of bass over quantity of bass but love when I can have both. These have really really nice bass. I am currently spending a lot of time with the RAAL SR1a and they have great bass definition but not quantity. There were times I thought I would turn the bass up a touch but early on having listened to the Rosson I wanted slightly more bass.The HE 1000 se hs very well done bass probably in the middle of the pack less than Meze or Rosson but more than Utopia or RAAL. Bass is nicely textured not as much so as the Utopia or RAAL but with slightly more quantity comes a trade off maybe. Overall striking a very Goldilocks balance that I found ultimately very satisfying.

Details - These are the most detailed traditional headphone I have had the pleasure to listen to. Room sounds and boundaries come alive. The HE1000 picks details that you may have missed with other headphones and presents them to you but not is splashy way or at the expense of tipping up the upper frequencies. These are fast headphones maybe tied or slightly ahead of the Utopia which is one of the fastest dynamic driver cans. While they were highly detailed I didn’t feel as though they were tipped up to tease out detail at the expense of tonality.

Timbre was spot on with just about no complaints

These were driven by my Headamp GSX-mini and my Sony WM1a. The GSX-mini had enough power to rip your head off with these. The mini was a great match for these with plenty of power and a one notch past neutral to warm sound. Based on my time with the Sony WM1a I would think Sony’s TAZ.... would be a killer match with these as well. The WM1a has just enough to drive these single ended and I was fortunate to have Forza Audio 4.4 cable for these so I could see how much they sang with the Sony WM1a.

Overall these are stellar headphones and deserve to be on your short list if you are auditioning or contemplating a TOTL set of headphones. Nothing to complain about on the sound front just really nice balanced sound.

I would however upgrade the cables upon purchase to either something from Moon or Forza as the cables would have bothered me long term, not the sound just the feel and look.

I highly recommend these and give them 4.75 stars out of 5 so in head-fi terms 5 stars. HiFiman has a real winner on its hands here.
Last edited: Sep 20, 2020
Reactions: InvisibleInk, Miru, thehutch and 7 others
View previous replies…

jp11801
Not at all listening to steely dan Dr Wu vocals are very present and upfront in the mix
M
Miru
Nicely written, I agree the cables do need some work when I tried them. The SE was a bit too airy sounding for my taste although. By the way, what camera did you use for the pictures?