The SR80 utilizes a 4 conductor connecting cable and larger ear cushions, the result of which gives a more open stage. The SR80 provides an improved bass resonance, which enhances the overall detail. John Grado says he strove for the best sounding phones for the money, and with the glowing reviews the SR80's have received, who can argue.PRODUCT FEATURES:Vented diaphragm;Non-resonant air chamber;Standard copper voice coil wire;Standard copper connecting cord;Mini plug with 1/4" adaptor.
Share:
Facebook Twitter Reddit Pinterest Tumblr WhatsApp Email Link

Pros: Presentation
Cons: Comfort
The Grado SR80i presents everything very nicely, almost romantic, you can hear everything,
until you start comparing. Its not the most detailed, however it is very transparent. Its
soundstage is not very large although initially it does seem so. Sounds that are supposed
to sound far away, don't. e.g. a choir behind a main singer sounds about the same distance
from you. However these are one of the best deals you can find used. Sometimes there are
treble spikes, but they are rare, the bass is actually pretty nice, but does not extend
fully.
Overall I really like these, is does almost everything very well, a great package, but they
are not the best in any one area. So for that reason, I am selling these headphones.
Pros: Very unique mid sound. Great for rock music.
Cons: Not very good for bass heavy genres. Flimsy plastic. Non-removable cables. 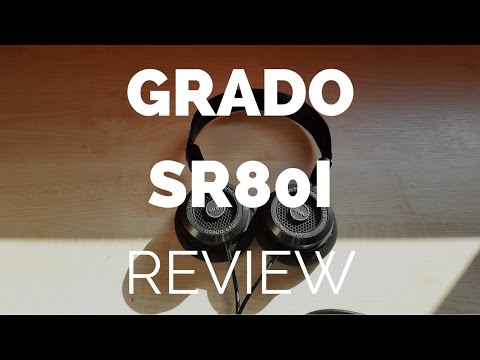 This is my first experience with the "Grado sound" and I think I know why it's popular with rock lovers. The harsh but somehow lush mid sound strips the processed nature from guitar distortion to give it a live amp sound. These are the most unique headphones I've owned sound signature wise.

The non-removable cables are an annoyance. I had the wire connection to the left channel die on me and I had to ship these to another country to have them fixed for 35 Euros. Considering the price was $90, I can't be too fussy about build quality aspects like this but it was still a detraction.

It's also very uncomfortable after a while of use. Very light though. 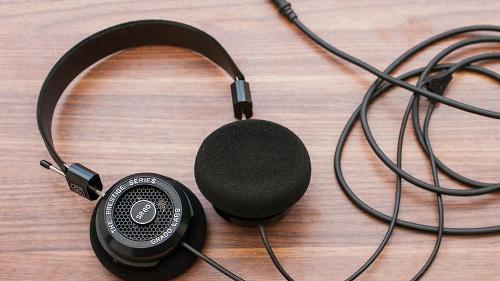 Intro Thingy: I was wondering if I should even review the SR80i because Grado's e series cans came out not too long ago and I was thinking noone would heed my review 'cause the e series is said to be a fairly big improvement over the i. So, instead of writing a review that'd be putting the SR80i in one of those "great can, I suggest everyone go off and buy it" lights, I'm going to write something more along the lines of a tribute and a tip of the hat. So, without further delay, here we go!

Background Crap:
Having got back from my uncle's place in Portland Oregon and hearing his Magnepan 1.6 speakers hooked up with two very good subwoofers, I learned that the Beats headphones gifted to me were absolute crap in comparison. He is not a headphones guy, and in fact the only cans he has are a pair of Sony somethingrathers that I can't recall the model of. They sounded pretty bad as well, at least straight out of my phone, so I started on my head-fi journey then and there. I actually registered on this site while I was still in Portland, sitting on the couch listening to damn good music out of those sweet sweet Maggies... Erm. Maybe that's why I like my HiFiMANs so much, I'm destined for the planar worldview. Or something. ANYWAY. My budget at the time was pretty pathetic and I was learning a whole lot through my dorky loser noobish posts in the help section of these forums which I am intensely grateful for. I wanted something new that would shame my Beats and sound great, and I was first introduced to the idea of open-back headphones then. Well, I was introduced to them while listening to some SR125s with mismatched pads at another relative's house while there. I absolutely loved the sound, so much more.. open? Well duh, it just makes sense, doesn't it? When I got back home it took me about a month or two to scrounge together spare bills and change from here and there and I drove right up to the only store in town that sells anything hi-fi related at all and handed the guy a fat wad of $10, $5, and $1 bills. I drove home and popped em out of the box, plugged them into the hilariously terribly ancient Technics CD player my dad got for HIS birthday like forty years ago or something, tossed in Yes: Classic Yes, and my favorite song of all time, Heart of the Sunrise came through like I had never heard it before. And I haven't turned back since then in my quest to get the most value and emotion out of my system.

Impressions: Bass Reproduction: The SR80is can't reproduce one note bass. Now we've got that out of the way. What they do good though is electric bass in tons of rock, jazz, and fusion. Acoustic bass isn't terribly good, but it isn't bad at all. The huge midbass hump shown on many frequency response graphs shows something I do like about the grados. They're very aggressive sounding, which is cool for a lot of the progressive rock I listen to. Kick drums really smack down pretty hard, but if they're tuned to go pretty deep they won't give you that much impact. (Think John Mclaughlin & The 4th Dimension) Rolling bass drums don't really have the size they need in classical music or soundtracks. Like in Vangelis' Blade Runner soundtrack, the pieces with rolling bass drums just don't feel big and expansive. The sound is there, just not in the quantity or quality needed in my opinion. Tubas, bassoons, tympani, low piano notes, and bass strings just don't feel as airy and powerful as they can be, which is why I don't think the SR80is are great for acoustic concert music. They do shine in rock which is what I like them for. However, the infamous grattle is a thing if bass gets too powerful, which it usually doesn't for me.

Midrange: The Grados do midrange pretty well in my opinion. Vocals are especially nice, as well as guitar, both acoustic and electric. I actually don't have a whole lot to say about midrange because the Grados don't do too much wrong.

Treble: Treble, consisting of those ultra high guitar solos, Maynard Ferguson's obscene wailing on the trumpet, Cymbals, and assorted other sounds like breath and the tapping of impatient instrumentalists in the background are all pretty sharp. Sometimes they can get overpowering on brightly mastered recordings where every crash of the cymbal is a smack to the face. But this is really where the aggressive nature of the Grado house sound comes into play. This attacking treble gives rock an energy I don't find with other headphones I've listened to. The sound you do get is almost a little synthetic at times when the splash of a cymbal gets a little too loud and screechy, or Maynard's solo starts to sound like a thousand babies screaming for food, but I hardly ever run into these problems now that I.. well.. don't listen to them very much anymore. I never thought the treble in the Grados was overpowering until I had heard other cans to compare with, and even then, so long as I don't crank the volume up they don't do anything wrong in the treble.

Conclusion: Getting the SR80i was the best decision I've made in my audio career. Not only did they start me off on this wonderful site, but they started me off on the path to enjoying my music much more than I ever did before. I used to get home from work at 12:30 in the morning and plug in the cans to listen to some Kansas or Pink Floyd. I've had a lot of fun with these awesome cans and I can't even begin to list all the things they've helped me with. Oh wait.
1. Introduced me to the world of hi-fi
2. Gave me a sense of accomplishment as my first purchase at $100
3. Converted me to the sound of open headphones
4. Bla bla, shaddup, they're great headphones for the money and I suggest the SR80i and any of Grado's lower priced cans as an entry level into either open backs, hifi, or just to get people to know what the fuss is about the Grado house sound.
Neutral? Give me a break. Flat? HAH! Grados aren't meant to be tools of music snobbery, they're for people who want to jam out, have fun, and give less than a Schiit about extreme fidelity. I love my Grados for what they do, and they're coming with me no matter where I go, not just as a reminder, but a good ol' pair of cans to show people what they're made of and something to come back to to show me what a $100 headphone is capable of.

Damn you Grado family for getting me started in this escapade, and thank you for giving me insight into how music is really supposed to sound. Thanks to all who helped me decide on my first headphone purchase.