FiiO’s original X7 featured replaceable amplifier modules – while it was nothing new and already done before by at least one other audio manufacturer, it was something rather unusual at that time, but also introduced to possibility of additional amplifier modules to be released in the future, for buyers to possibly select a module that fits best for their needs and wishes (e.g. balanced output or high power output).

The standard module the original X7 was offered with and that came with it was called AM1 – a battery-friendly module with a rather low but (for most scenarios) still more than plenty powerful current and voltage output, low output impedance and good noise performance with very sensitive in-ears.
Later, it was also offered as an additional extra, for example to be used with the X7 MkII digital audio player or Q5 DAC-Amp, both of which come with a different module as standard.

Unfortunately the AM1 module was meanwhile discontinued, as I was told, since it didn’t receive as much interest as the other modules, nonetheless some stocks still exist wherefore one can still find it for sale.
And in my opinion, the good old AM1 module is still a great choice if you plan on using it with very sensitive in-ears together with the X7 MkII or Q5. 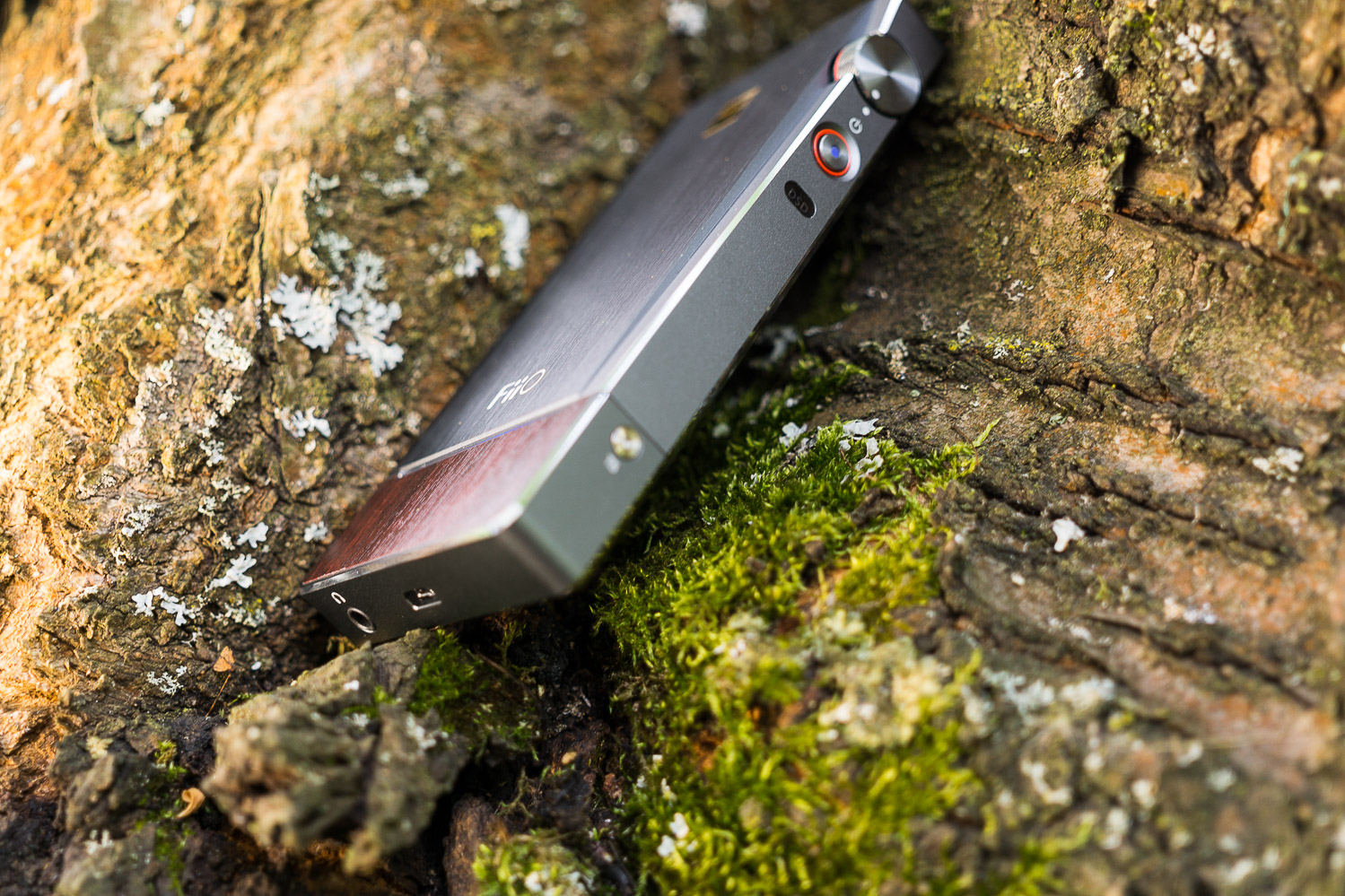 So in this sound-focussed review that I try to keep rather short (nonetheless the outcome is still longer than I wanted, but anyway), I will have a closer listen with the AM1, used with the Q5, and mainly focus on output impedance measurements, hiss performance with very sensitive in-ears and some subjective impressions.

Nonetheless I cannot continue without mentioning that the delivery content was quite surprising and overwhelming for me, since the amp module didn’t only come with a protective, however unbranded metal storage/transport tin, but also two pairs of T5 screws (it’s good to have a spare set, I guess) and various vinyl stickers to change the amplifier module’s visual appearance to your personal liking (I have to admit that I quite like the brown-reddish rosewood (?) imitation and have installed it for the top side, and used the carbon fibre imitation for the back side as it matches nicely with the Q5’s black pleather back; furthermore, I might cut the remaining rosewood imitation vinyl stickers and apply them to the Q5’s top panel’s sides).


Full disclosure: I was provided with a sample of the AM1 module free of charge.
My review is, as always and nonetheless, unpaid, as honest and unbiased as humanly possible, and reflects nothing but my own impressions, just like with the plethora of audio gear I own myself and have possibly reviewed and/or talked about as well. I wasn’t given any directions/guidelines, no matter how it would turn out.

The test was performed using the FiiO Q5 (mainly USB DAC connection, sharp roll-off or short delay, sharp roll-off filter) and AM1. It’s probably also worth mentioning that FiiO also offers an adapter cable called “L26” that lets you used your headphones with balanced TRRS 2.5 mm connector with any single-ended source with a standard 3.5 mm TRS socket. In the same paragraph it is probably also worth to mention that unlike some of FiiO’s older adapters and cables that I personally own (that were somewhat stiff but except for one case (an LOD adapter for 30-pin Apple devices) still last to this day and serve me well), this L26 adapter’s cable is very supple and appears valuable as well as durable. 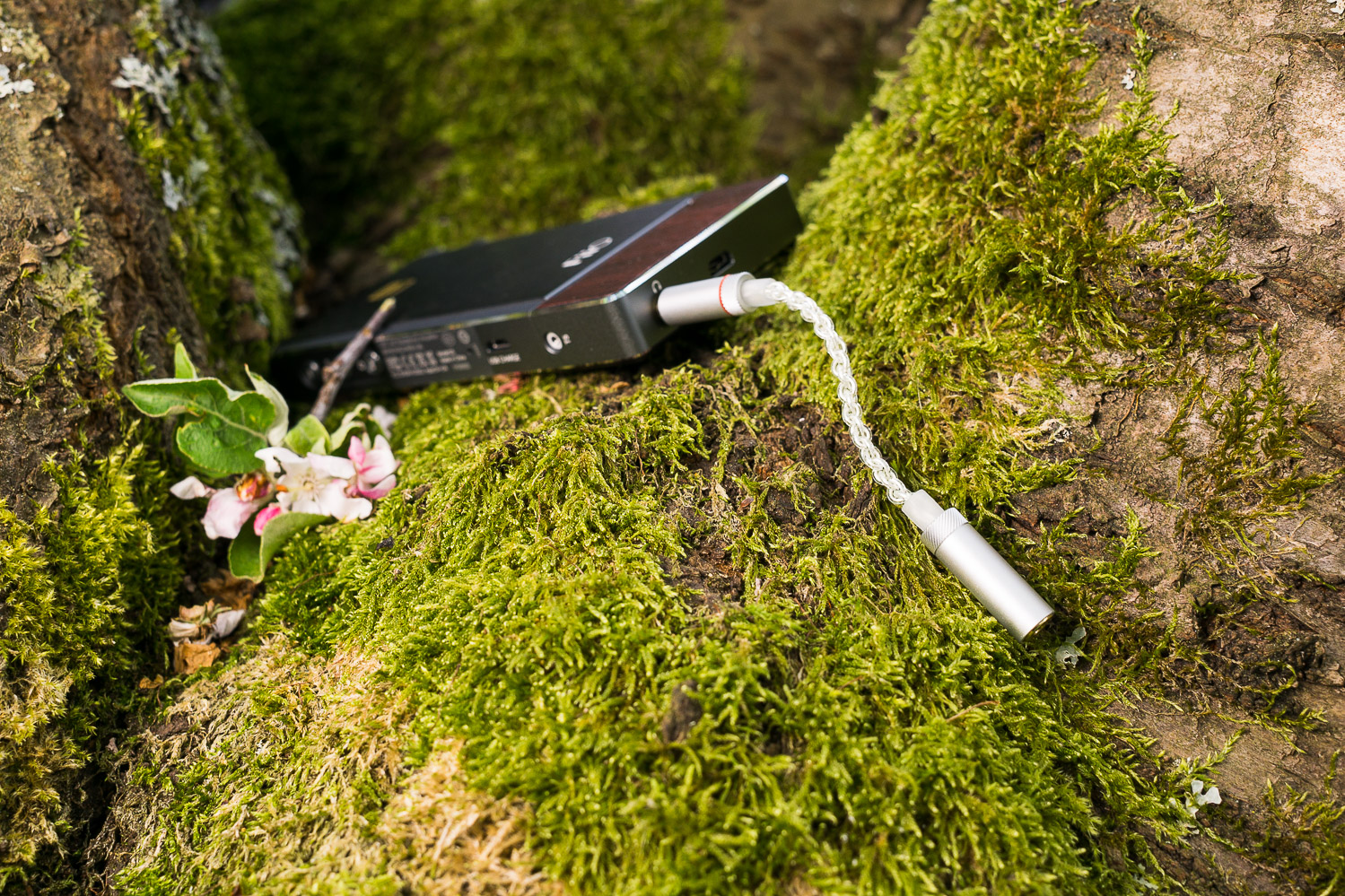 One of the most basic and fundamental things an audio device should have is a flat unloaded frequency response in the important range of 20 to 20000 Hz. While it is anything but sorcery to achieve this in modern days, some (however mainly inexpensive and rather no-name) audio devices still fail to achieve this very basic thing.

So let’s see how the AM1 measures without a connected load: 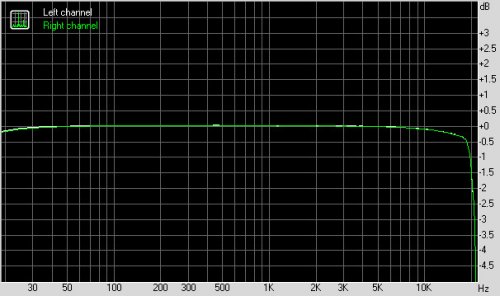 As one can see, a flat frequency response, just the way it should be, is what the FiiO module outputs. This is exactly how it should behave and how one would expect it.

This is what the FiiO AM1 module puts out when connecting a critical, low impedance multi-driver in-ear with a strong impedance swing to its output: 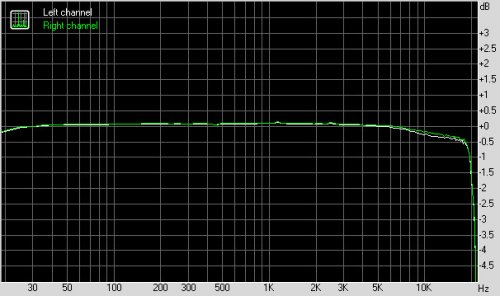 The connected load was my Ultimate Ears Triple.Fi 10, an in-ear that is among the more source-picky species of its kind and changes its sound rapidly as the player’s output impedance climbs (yes, it even makes a really low output impedance of 0.1 or 0.5 Ohms visible). I therefore pretty much always use it for measuring the frequency deviation compared to a simple load. Based on this, the output impedance can be calculated.
The measured deviation in combination with the AM1 module can be used for calculating the output impedance, which is only around tiny 0.2 Ohms, so the AM1 module is perfect to handle any in-ear diva regardless of impedance swing extremeness and drive it neutrally without any frequency response deviation.

So if you were wondering whether or not the AM1 module has got a still low and multi-driver-friendly output impedance in single-ended mode, I can happily tell you that it does. Oh yes, it really does. And with its ~ 0.2 Ohms, it is also more reference-like than the newer AM3A (~ 1.3 Ohms).

As someone who is quite sensitive to hearing hiss when it is present and as someone who is also using many sensitive and some very sensitive in-ears such as the Shure SE846, Ostry KC06A or Pai Audio MR3, three models that are real “hiss-magnets”, having an audio device with as little audible hiss as possible has always been an important thing to me. The destination of perfection, a hiss-free audio player in combination with super sensitive in-ears, was what I could reach with my iBasso DX90, the Plenue 2, as well as the Luxury & Precision L3 and L3 Pro, though the L & P players don’t have the ideal output impedance for every kind of in-ear. And devices such as the iBasso DX200 with its stock amplifier module came very very close to it.

Using the AM1, regardless in what mode, the amount of audible hiss with extremely sensitive in-ears such as my Shure SE846, Pai Audio MR3 and the Ostry KC06A is fortunately on the quiet side and quite faint, quite close to being not present at all. However, it is ultimately still not as quiet as my fantastically quiet iBasso DX90, RME ADI-2 DAC, Leckerton UHA-6S.MkII or the Cowon Plenue 2. It also hisses very slightly more than the iBasso DX150 or DX200, and is also just a hair less quiet than the FiiO Q1 MkII (analogue line in). Nonetheless it is among the best devices on the market in this regard and slightly quieter than the popular Chord Mojo that I own as well, or my Apple iPhone 4, but for perfect reference, I would wish for even slightly more quietness during quiet passages using extremely sensitive in-ears.
Compared to the AM3A, the AM1 outputs a hair less hiss into extremely sensitive in-ears, but the difference is so minor that it is negligible.

Grade: Reference A--/B++; close enough and among the best devices on the market, but just a small step below the absolute elite.

Now to the quite subjective part of my review. My opinion and experience regarding the perceived “character” and “transparency” of source devices and amplifiers is this one: there can be an existing audible difference between various devices, but it should definitely not be overrated – simply because the basic character of a headphone won’t be completely changed (if the circuit follows a clean design philosophy and the output is load-stable), but sometimes rather slightly “shaped” and is usually very subtle in many cases and is (in most cases) just slightly present (if even there) and not “huge” or like “totally different classes” or “night and day”.
I am not a fan of exaggerations and hyperboles here because as long as the objectifyable parameters of an audio player are neutral and not too shabby (loaded frequency response, distortion, crosstalk, dynamic range, noise, …), the audible difference, if there is any, will be quite small at best if two devices are compared with proper volume matching that cannot be done by ear but only with instruments, since even small differences in loudness can be perceived as a technical advantage by our ear and brain.

A more detailed, German article written by me concerning the “audible difference between comparable audio devices, if there is any”, can be found here: […]

So let’s go on with my subjective impressions and observations (for this critical listening, I mainly used my UERM, Audio Technica ATH-IM03, Etymotic ER-4S, Audeze LCD-X as well as the NocturnaL Audio Atlantis and Fidue SIRIUS in single-ended mode. I also used a few more headphones and in-ears from different price and performance ranges for listening but more for personal enjoyment than for the sake of critical listening and comparisons:

I don’t really want to write much here as what I would write would be quite identical to what I have already written about the AM3A module in my FiiO Q5 review.
Both amp modules sound basically similar – however using sensitive in-ears, volume matched thanks to foobar 2k’s digital volume attenuation, I hear the AM1 as ever so slightly, a hair, minimally less spacious and less transparent sounding, but the difference is, just as with the noise floor, so small that it could be considered negligible. One could even go so far to not talk about minimal superiority but an overall slightly different “character” with a slightly less spherical sound reproduction. To me at least, the lower output impedance of the AM1 is an advantage that is bigger than the (probably imaginary) minimal disadvantages.

In my opinion, the AM1 module, mainly for the Q5, is definitely worth an investment even if you already own the AM3A module, if you an output impedance perfectionist and have got low impedance in-ear divas with a high impedance swing that already react to output impedance figures that are usually good enough for most other multi-driver in-ears that wouldn’t show slight tonal changes yet.
It can also be of an advantage if you want to squeeze out a little more battery life, ever so slightly better hiss performance and a minimal increment in volume control precision with the Q5.
Reactions: Otto Motor and hqssui
Read more…