Pros: Detailed,Closed back, Clear,Sound really nice
Cons: Ear pads can be uncomfortable depending on the size of your ears,Headband pad can get uncomfortable.
Beyer dynamic DT770 pro Review

The Beyer dynamic DT770 pro-80 ohm headphones is one out of the three DT770 model’s with a low ohm..  A simple sound card like an Asus Xonar DG/X or a sound blaster Z with their headphone amp IC’s will work. The DT770 pro-80 still benefit from a standalone headphone amp.
The DT770 pro-80 is made out of hard plastic’s which in my hands feels like it can take a beating. The Headband pad on the top might work for some people. But might not for others, the weight of the headphone was very light on the top of my head which is a plus. Since my primary Headphone the HE-500 is heavy. One issue I have with the DT770 pro-80 is the ear pads, they are not deep enough for my ears. So my ears touches the driver’s which over time is uncomfortable for me, Also my tip of my ears touch the ear pad top and my earlobe touches the ear pad too. People with smaller ears won’t have an issue with the ear pads.
The wire is very long which is good for when your moving around the room doing other things, when you are listening to music, Or when you are sitting back far from your computer or home audio receiver watching a movie or playing a game.  The wire looks like it’s very durable


The Setup
The gear that I will be using for this review will be the Gustard X12 Dac connected to a Burson Audio Lycan thru RCA, which will have the LME49990MA’s op-amp installed, in a two single op-amp setup. The Gustard X12’s USB input will be used. The Lycan is a transparent amp and will let you hear the sound of the op-amp. The reason why I going with the LME49990MA is it is a neutral and transparent op-amp. Which I find so far work well with the DT770 pro-80 letting it shine thru. 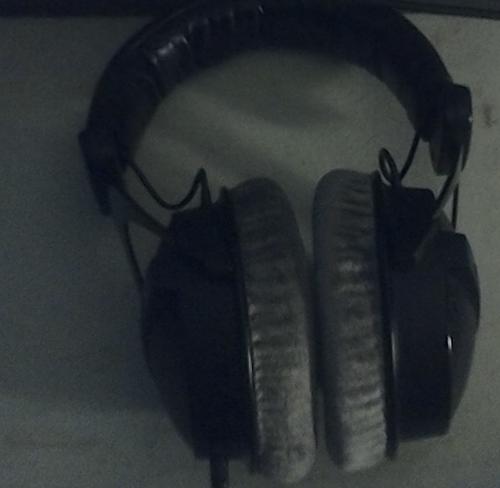 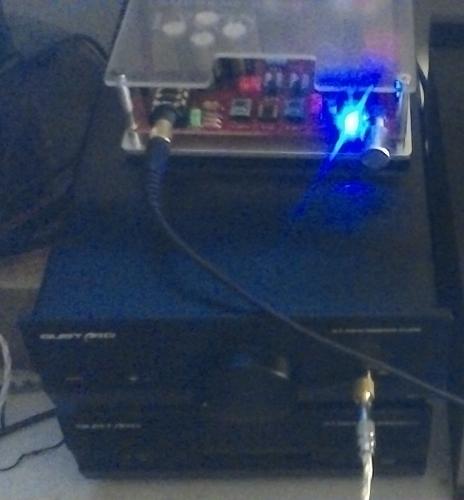 The Sound
Eddie Bitar – Kaboom (Original Mix)
The song starts off with a lot of bass before strings and then the rest of the beat. In this song the bass is impactful while being controlled, the bass is not one note as there is other tones of bass in the song that is heard, and another part of the song has bass that’s accurate and not impactful.
The bass doesn’t out do the rest of the freqs and the other parts of the song is detailed and clean. When there’s more instruments they can be heard from each other. The drum kit can be easily heard that starts in another part of the song and the snare is detailed and echo’s away from the center. The sound imaging is good.

Kong Speaks – Tooth & Claw
The song starts out with the bass hitting deep with the drum kit being clearly heard alongside with the detailed snares. The bass really sound good in this song. This song is also clear you can hear everything besides the deep bass.  The separation is really good in this song like the first song.

Speo – Penguin
The drums and the snares are very clear and detailed at the start of the song. The drums hit hard in the next part of the song. While there is bass it also hits hard and deep, the simple voice note is heard. When the bass stops. The drum kit and the snares are clearly heard and the instrument that playing afterwards sounds really good. Over all I like the way this song sounds with the DT770 pro-80s thru the lycan. Sound really nice. Everything clear.

Said the Sky – Clouds
The bass in the first part of the song is kind of impactful but clearly heard and the piano sounds like it spreading thru out the sound stage while having some weight behind the notes which makes it sound good. The electronica note that is playing along the piano sound really good, just like the piano playing by itself is very good.

Another part the bass is deep and hits hard and the strings.  Over all I like this song as well being played thru the DT770 pro-80s. There are voices in this song that keeps making me turn around to my door thinking someone said something, or the sound in the first part of the song which sounds exactly like a fire alarm, that reappears thru out the song. Get me really good too.

I didn’t think I would get such a bargain with the price I paid for these as I got these cheap. I didn’t know what to expect. I been using them for a week and a half. Originally these was going to be my laptop/tablet headphones. Now I will use the DT770 pro alongside my HE-500s since these isolate really well.
Pros: Great sound stage, great bass with EQ, sturdy build quality
Cons: Cumbersome to travel with, not compact, cable isn't detachable, 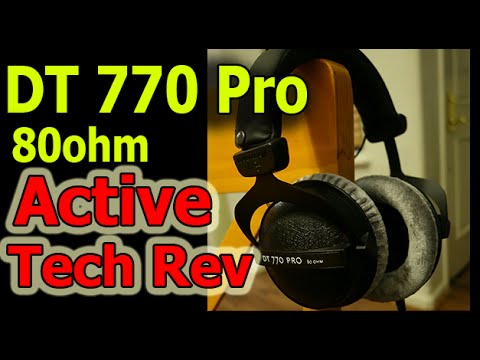 I made a video review of the dt770 80ohm  quite sometime ago and was finally finished it. I got them on sale at Guitar Center for $179.99 , the deal was better than anywhere on the web so I jumped on it. When I auditioned them in-store, I was quite impressed.  I'm not much of an over the ear headphone person, but these were comfortable and sounded amazing.

For most of my listening life I've used only in-ear headphones because I live a very active and mobile lifestyle.

As I began to use them more and more I noticed that they weren't providing me the "umph" I was looking for in certain kinds of music.  I also ran into so me issues with sibilance that was bothering my ears for female vocals. Not that it sounded bad, but quite the contrary, they sounded great!  But it seems that my ears are sensitive to that.  I used EQ'd it towards base and fixed many of my issues, in fact it sounded better for my tastes.

I've read great reviews about how noise cancellation and noise isolation was great.  They were, but not for noisy environments like a gym.

I've read so many great reviews about how it was like having 2 pillows on your head - amazing comfort and amazing sound.  I need more volume so i purchase the creative e1 portable headphone amp.

And I'll tell you that it made such a huge difference.  Based on my experience, if you get these headphones, you need to purchase the this headphone amp.

It turns out my head and ears are either too big or too sensitive (probably both).  So it would hurt my temples.  I've asked the forums here and they suggested stretching it out, and it did help a bit, but not enough to justify keeping them.

Although my written review here seems a bit negative, my video review expresses my enthusiasm for them - however my issue is that, for my lifestyle, they weren't a proper fit.
Pros: very very comfortable. Sound is deep, so deep that you start to hear the imperfections in the song, causing siblance.
Cons: Cord is not detachable, and it's too long, requiring tie to keep it under control. Sound is bass emphasis without amp, with amp, it's a pleasure.
1.) Using this on a portable device: IPhone 5s/6/Ipad/Android Phone:
The portable devices are able to make the DT 770 Pro work, but the result is an emphasis on bass, and the volume is only enough to listen to in a normal environment.  If you're trying to drown outside sounds, you really need an amp.  The high trebles are also not very pronounced with an amp. (Siblance did not occur with portable devices)  So overall use for a portable device is not really recommended.  You'll probably get a better sound and experience from the standard IPhone 5-6 earbuds.

2.) Using this with amp.  I tested with my Yamaha home stereo amp as well as a portable Fiio E12 Mont Blanc.  In both situations, the DT 770 Pro was able to bring out the clarity of the music, and show the depth of the sounds.  The comfort of the headphones wrapped around my hear was so good, I could hardly feel it around it, giving the sound presentation that the music is all around you, rather than a cup stuck to your ear with music pointed in your canal.

The break in for me was about 120 hours before the muffled bass started to level off and the mid and highs started to be more pronounced.   The DT 770 Pro 80 was still more even than the Audio Technica ATH-M50x, with a better sound stage feel.  The DT is also not as bright as the Shure SRH840, especially with the amps.

Overall, it's a wonderful headphone, but if you prefer something bright (like you prefer Yamaha pianos over Kawai pianos), then you might want to stick to the Shure SHR840 or the Sennheiser HD598.   If you're more into Rock, then the ATH-M50x.   DT770 is something in the middle, not as well refined as both of the previous cans.  The DT770 Pro 80's equilibrium is well placed just..... slightly south of the mid, with a good reach all the way to the low and most of the highs.
Read more…