Introduction
What is the best headphone amplifier for the hard-to-drive Hifiman Susvara? For those not familiar, the Susvara and its Hifiman predecessor, the HE-6, are notoriously hard-to-drive planar magnetic headphones with some enthusiasts going down the path of using dedicated speaker amplifiers to drive them. Prior to this review, I had been using the DNA Stratus 2A3 headphone amplifier as my primary amp for the Susvara as well as my other headphones. With it’s 1.8 watts per channel, the Stratus does a great job with all of my headphones but when it came to the Susvara, I was not convinced that their full potential was being met in terms of dynamic range and musical weight as my normal listening level would usually be near the edge of the amp’s volume pot. To put this into context, we’re talking about unlocking the last elusive sliver of performance potential.

Auris Audio, a company founded in 2013 and based in Serbia, began exhibiting at CanJam shows a few years ago. Auris specializes in dedicated vacuum tube amplifiers for headphones as well as other electronics and speakers for 2 channel use. The HA-2SE was Auris Audio’s first foray into the headphone audio market with the Nirvana, Headonia, and the recently released Euterpe rounding out the product line for headphones amps. All of the products share a distinct design aesthetic and combine gorgeous woodwork with natural leather that look more like pieces of luxury art than electronic components. 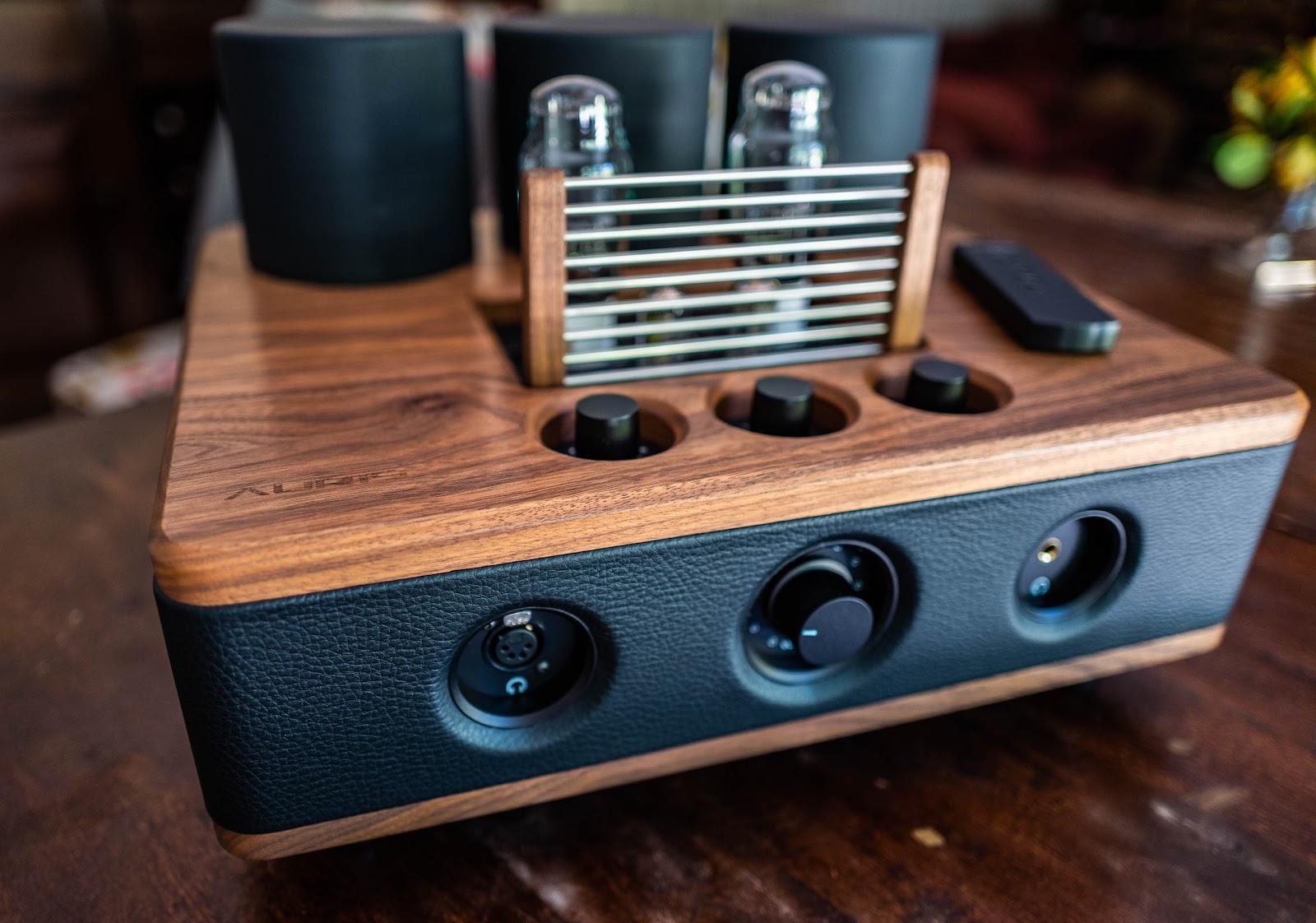 I’ve always been impressed with the sound quality of Auris’s offerings during my brief listening sessions at the various CanJam’s around the world, but it wasn’t until my visit to the Axpona show in Chicago earlier this year, that I was able to spend a little more time with the amplifiers, and specifically, the Headonia driving the Hifiman Susvara.

Miki Trosic, CEO of Auris Audio, explained to me that the Headonia 2A3 amp was designed from the ground up specifically with the Susvara in mind and then proceeded to plug in two Susvara’s simultaneously to prove the point. Needless to say, it was a very impressive demo and several weeks later I received the Headonia for a full review. 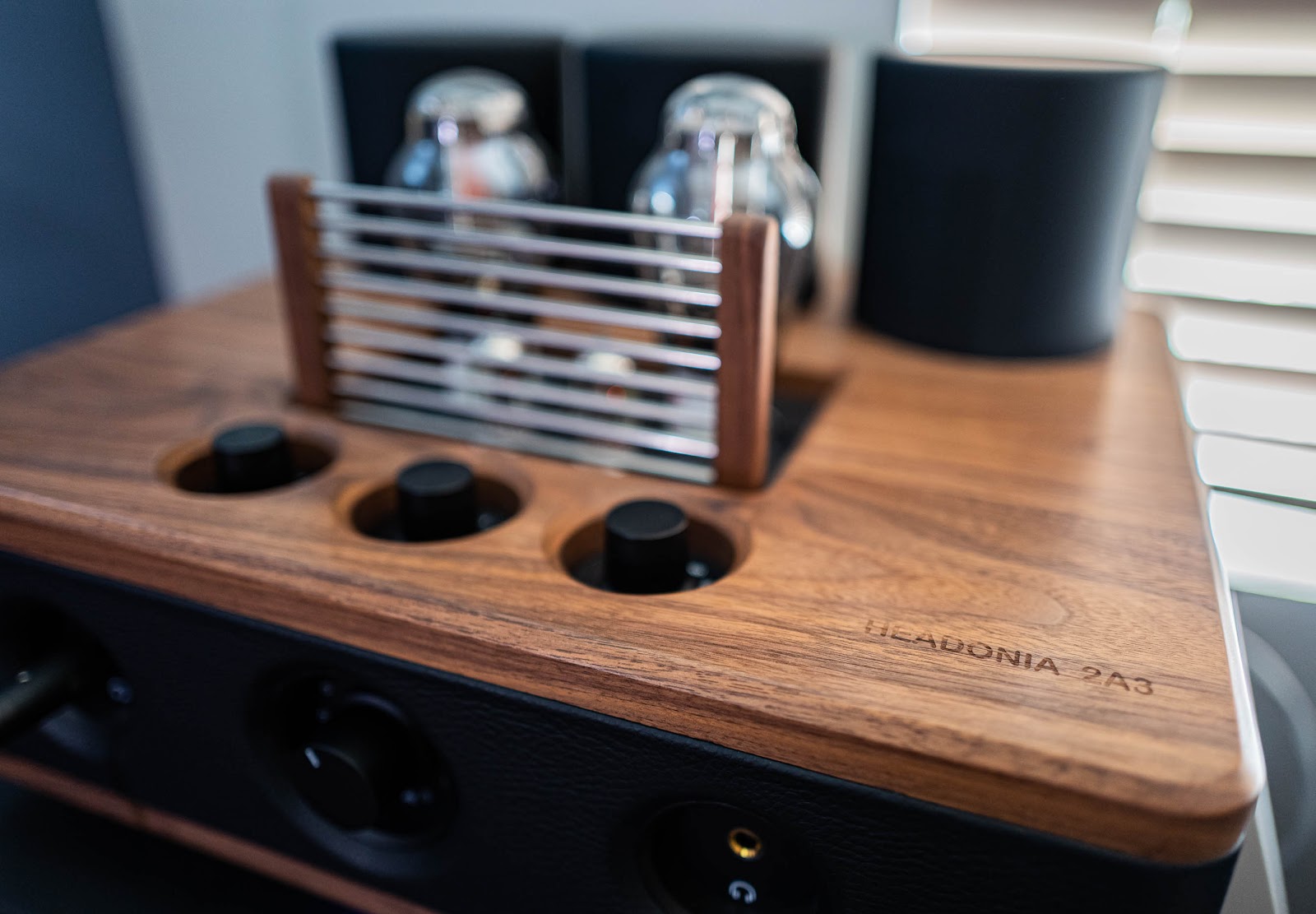 Unboxing, Setup, and Build Quality
The Headonia arrived double boxed and well packaged. Opening the box reveals the amplifier, a set of 4 spikes, paperwork, a milled aluminum remote control, and a pair of Auris branded gloves, which is a nice touch. The stock tubes that ship with the amp are a set of Electro Harmonix Gold 2A3s along with a set of generic ECC81 tubes.

The Headonia is a large and imposing piece weighing in at 53 lbs with dimensions of 17.7” x 15.7” x 10.6” (inches) and is available in two color options, black or white. This amplifier features flawless and beautiful woodwork, with both the top and bottom solid wood plates sandwiching the leather wrapped chassis. Even upon close inspection, all of the seams are perfect and the overall build quality is extremely impressive and shows a high level of detail and execution. It is a luxury piece in every sense of the word.

Looking at the back of the Headonia, we have 4 sets of analog inputs. There are no balanced inputs on the Headonia as this is a single ended amplifier. Next to analog inputs there are tube balancing pots for the right and left channels, and the AC power connector. 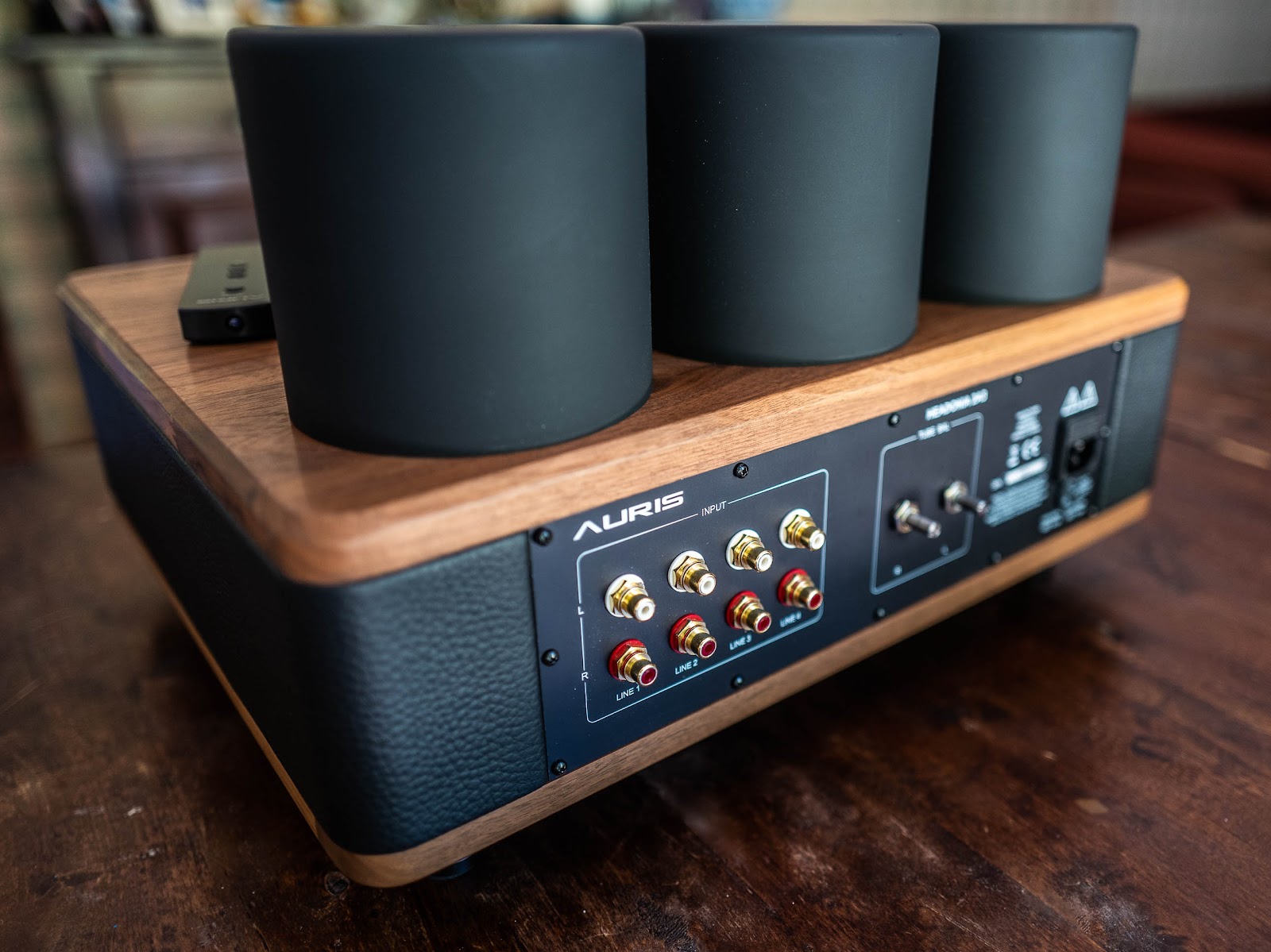 Moving to the front of the unit, the amplifier has 2 headphone outputs, one single ended, and the other with a 4 pin balanced connector. On the top of the unit, there is an input selector knob labeled L1 through L4 for the analog inputs and two impedance selector knobs for each of the headphone outputs. This enables the user to dial in the appropriate impedance setting for the headphone being used and has 32/80/150/300/600 Ohm settings. Which in turn, makes the Headonia ideal for driving various types of headphones, along with the ability to do so simultaneously. Behind the the top selector knobs, there is a small protective gate which protects access to the four tube sockets.

Finally, front and center is the volume control knob which is nice to operate manually along with the ability to control the volume using a supplied remote control. The remote feels premium in the hand as its made from solid aluminum and can control the volume as well as providing a mute function. 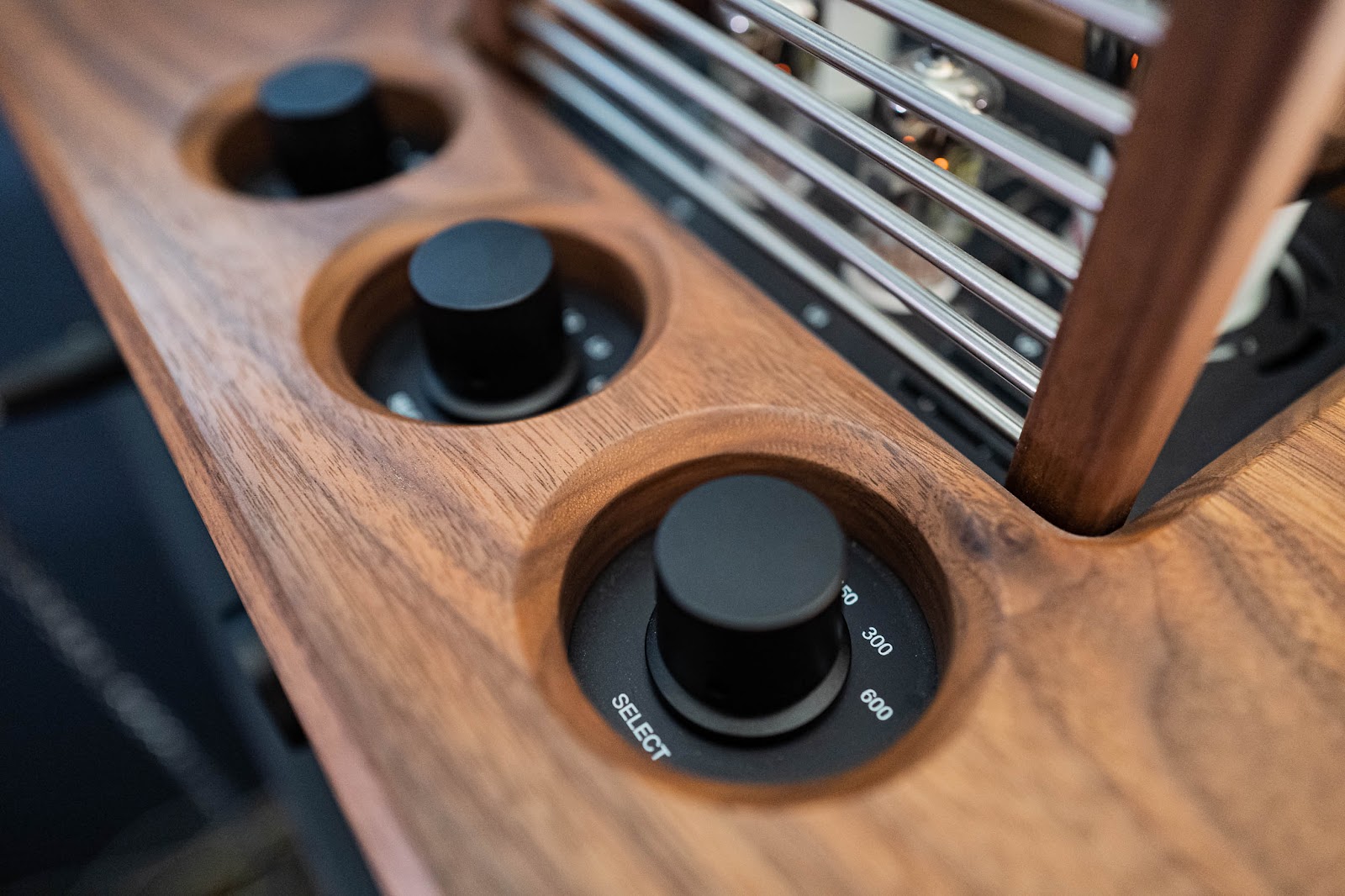 On the bottom of the Headonia, there are spikes to keep the unit elevated as well as a pair of air vents for cooling. There is also a blue LED status indicator to show when the unit is switched on and in operation. I found this unobtrusive and elegant looking but it’s worth noting that this cannot be switched off. During my time using the Headonia, the unit remains cool to the touch with the only heat emanating from the tubes themselves during operation. I’ve also left the unit running all day long with the same result.

The overall build quality of the Headonia is very impressive. Operating the various selector knobs and even plugging headphones into the unit’s outputs exudes a level of confidence and satisfaction that is usually only experienced with select high end components. 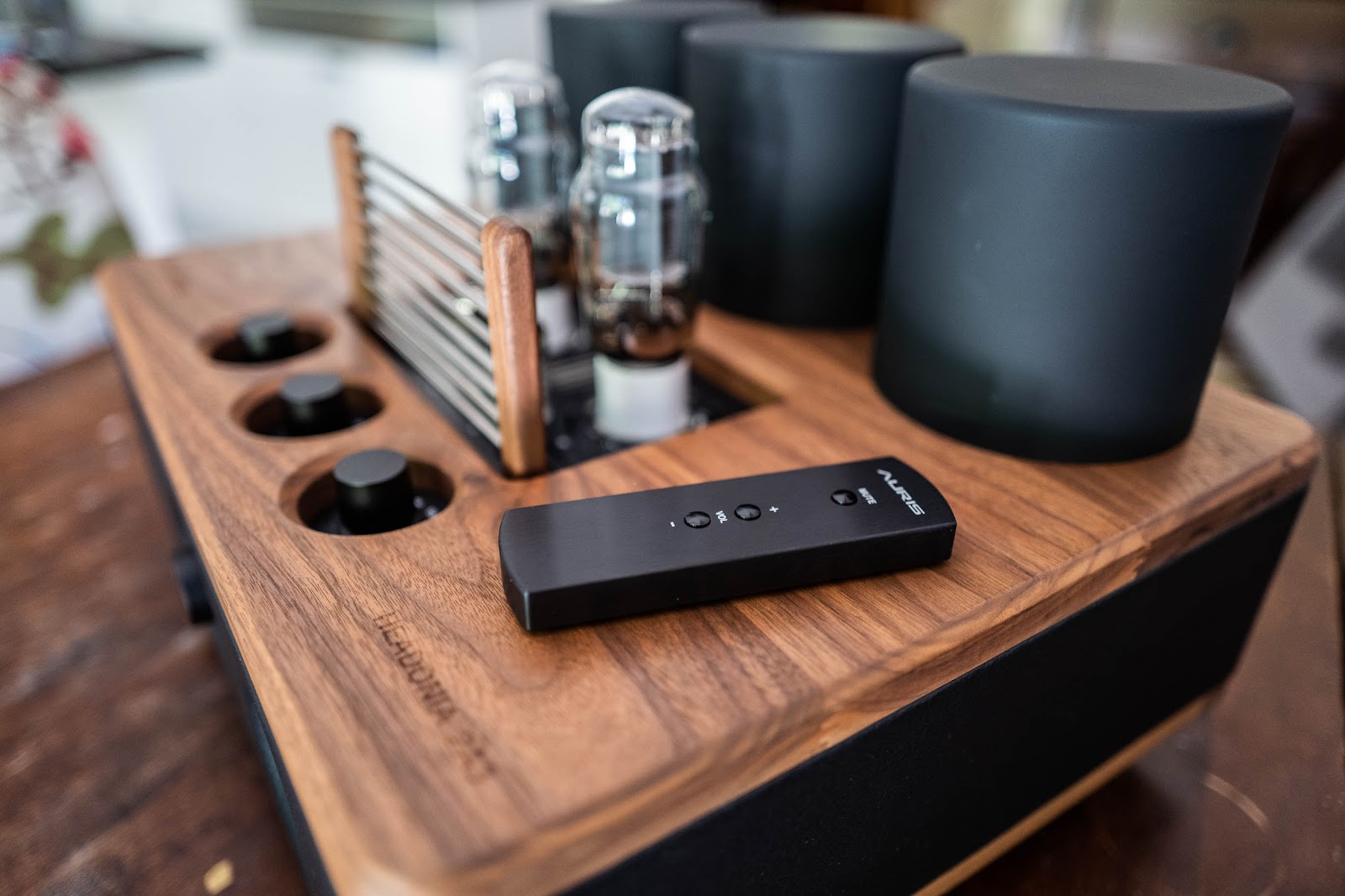 Sound Impressions
The primary system used to evaluate the Headonia was the Innuos Zenith MKIII music server, along with the Benchmark DAC3 B, and Hifiman Susvara headphones using the Kimer Axios Hb cable terminated in 4 pin XLR. Amps used as comparisons were the Benchmark HPA 4 and DNA Stratus as Headphone amps. Other headphones used were the Hifiman HE6, Abyss Diana Phi and MrSpeakers Ether 2. With regards to the tubes used in the Headonia, I found the stock tubes to be very good, only changing out the 2A3’s to a set of Sophia Electric 2A3s that I had on hand. The Sophia’s traded off a very slight decrease in overall impact for a larger increase in overall transparency and resolution.

The sound from the Headonia/Susvara is immensely powerful yet fully controlled, highly transparent and detailed while simultaneously being as smooth as velvet. The level of dynamic range is quite astonishing and I found myself fully immersed in hearing things in some of my favorite music that I had not heard before. The soundstage is huge in both width and depth and is a completely immersive experience.

The amplifier has a linear, neutral sound signature with some slight tube warmth but never crosses into the traditional “tubey” type of sound signature. The dynamic range and overall control of the amplifier is fantastic with lower volume passages coming through as pristinely as the more powerful ones. This is a goldilocks type of sound that is organic, natural, and incredibly immersive. And it does this with a wide variety of headphones, letting each headphone’s unique sound characteristics shine through. 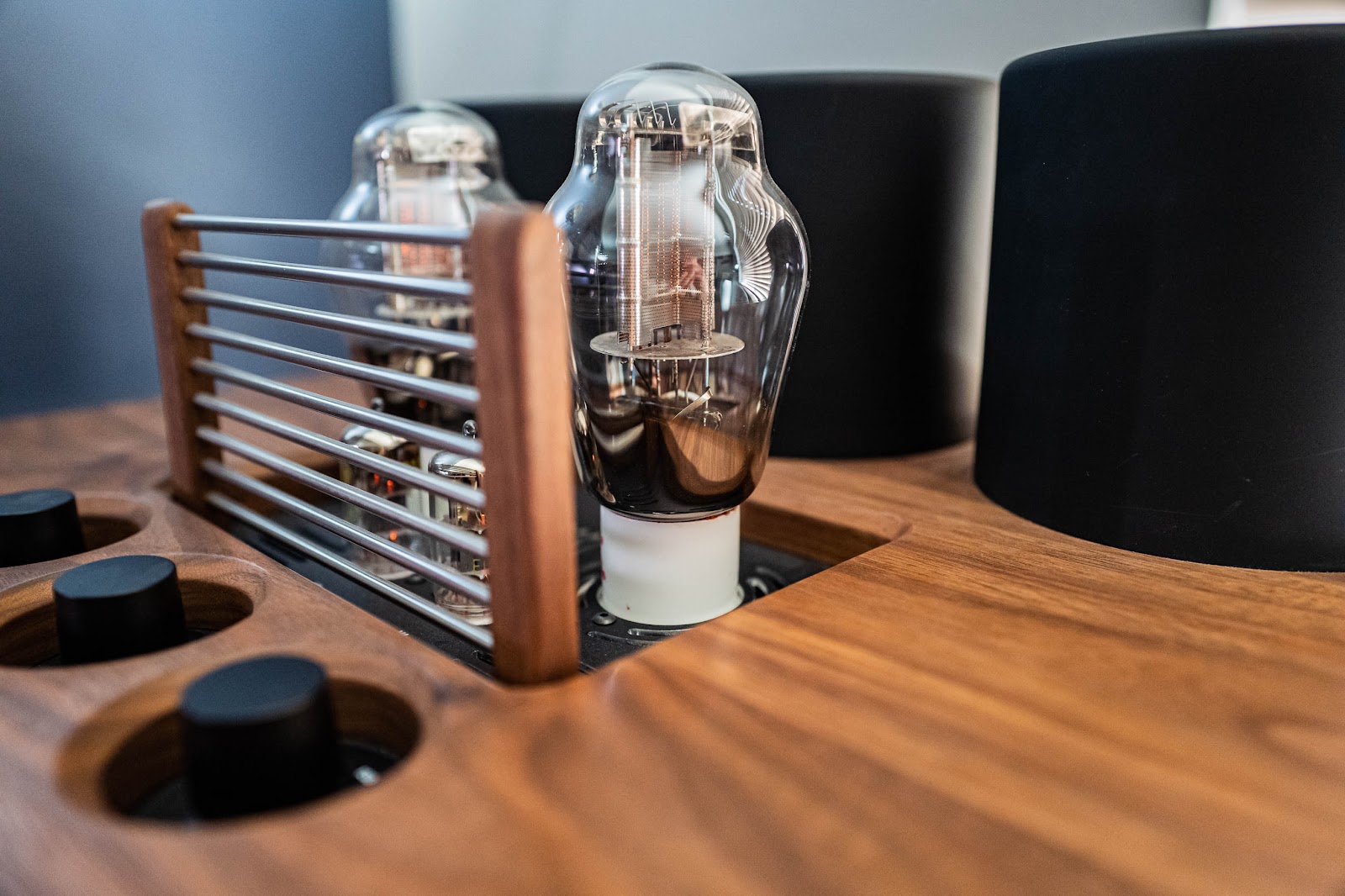 In this comparison, the Headonia has a slightly larger soundstage and overall sounds fuller in the lower registers with more weight to strings and vocals. On the flipside, the HPA4 sounds slightly more transparent at perhaps a slight expense of musicality. 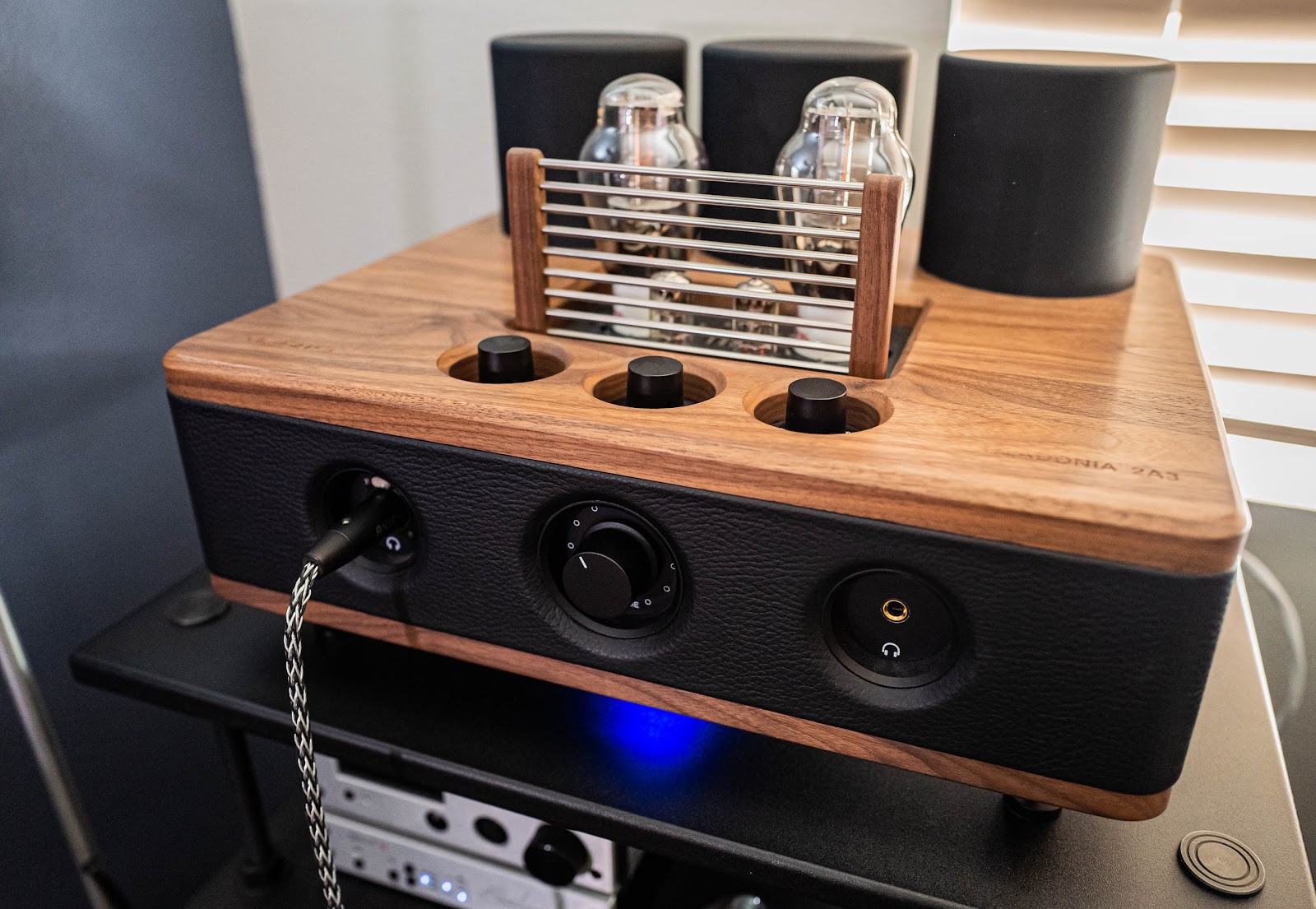 Conclusion
The Headonia is among the best pieces of headphone audio gear that I’ve heard at any price and is a true end-of-the-line flagship tube amplifier. It absolutely shined with every headphone that I could throw at it without breaking a sweat and could even do so driving two headphones at the same time. To my ears, it’s an optimal match with the Susvara driving it with powerful authority and finesse. Tubes impart their own sense of magic and I can strongly recommend auditioning the Headonia for those looking for a flagship headphone amplifier to drive all of their non-electrostatic headphones, and specifically, Hifiman Susvara owners looking for an endgame amp. 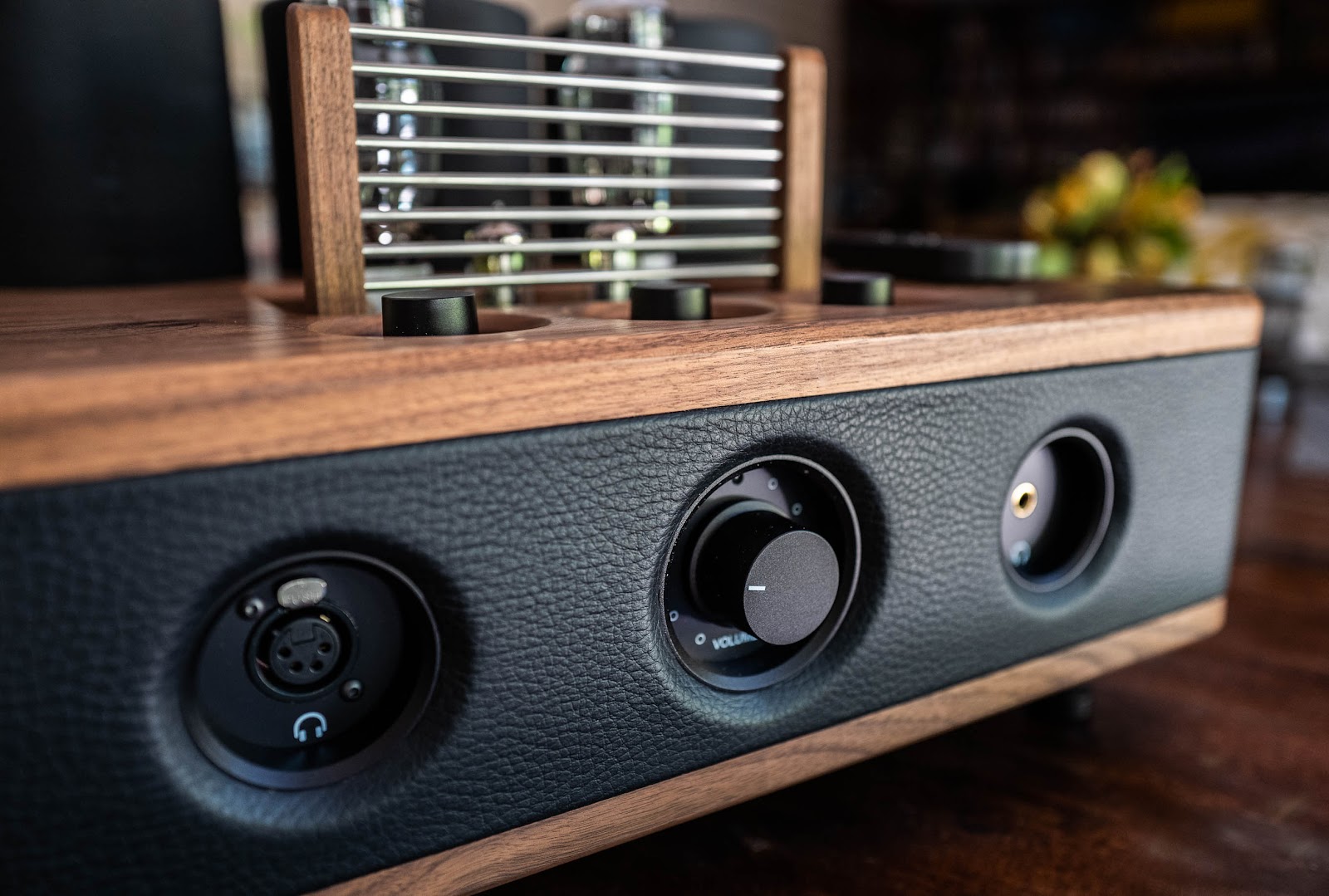 iBo0m
Great review, price not so much I've also checked few e-shops and what a price difference. The US seems to offer the best prices.

serveth
it looks so sexy

Empyah
Nice review.
Do you have any pics of the innards?
Read more…