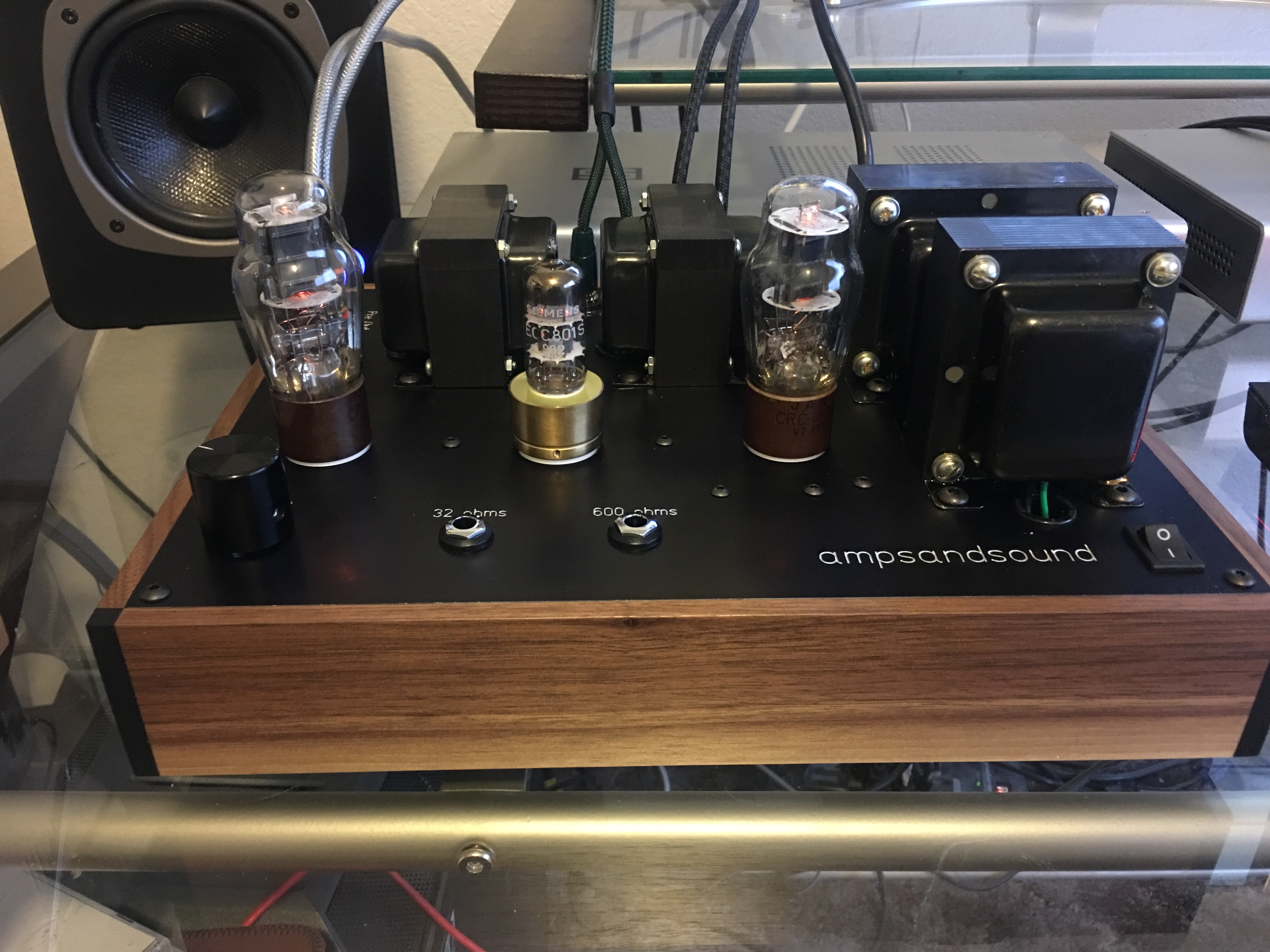 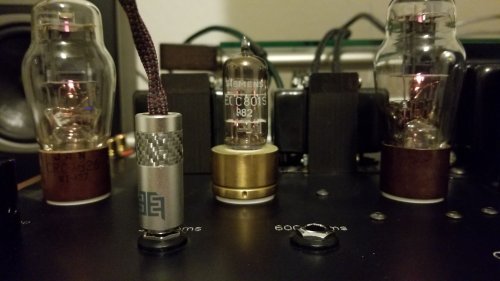 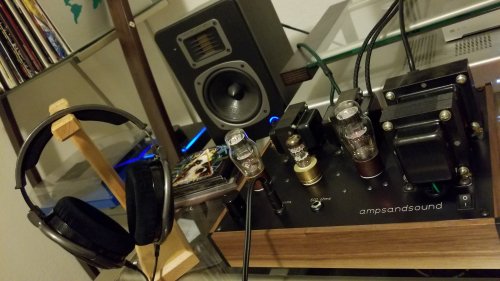 Intro:
The ampsandsound Kenzie Encore is an improved version of the original Kenzie headphone amplifier. The amplifier uses two 1626 tubes for output and a 12SL7 for the input. It can also accept 12a(x,t)7-series tubes using an aftermarket adapter. Unlike the original Kenzie, however, this version has a second pair of RCA inputs and outputs to be used as a stereo preamp. I Purchased this unit directly from ampsandsound for my own use.

Justin Weber is the founder of ampsandsound, and offers a lifetime warranty on the Kenzie Encore. He's a great guy to work with on a customer service level and will go out of his way to give the customer what they want.

Build Quality/Features: The Encore, like the Kenzie before it, has a nice, old-school metal and wood cabinet. I personally like the "audio furniture" look. For those curious, the wood used is walnut. The Encore is sturdy and built to last. The circuit is a combination of PCB and point to point wiring. The Encore uses high quality, but not boutique components. The transformers are custom made for ampsandsound. My Encore features optional input transformers and Auricap capacitors.
In answer to many customer requests, The headphone jacks are now on the front of the amp on the top plate instead of the rear. The Encore was created with dual purposes in mind: as a headphone amp and preamp. There is one extra set of RCA jacks for a second source, and RCA outs to send to a power amp or powered monitors.


Sound impressions:
The Encore is a harder hitting, more dynamic version of the Kenzie. The Kenzie had some noticeable low-level hum around noon on the volume pot, but was never objectionable in listening. The Encore is quieter, due to a larger choke (according to Justin). When I previewed the Encore at Canjam LA, it was clearly more macrodynamic than the original. I was able to listen with and without the input transformers in the circuit, and it made a big enough difference that I decided to order mine with them. As good as the original Kenzie sounded, there were more punchy-sounding amps out there such as the Mjolnir 2 from Schiit, which I owned at the time. I can't say much about whether the Auricaps made a difference compared to the standard caps used, but I figured "what the hell".
With the RCA 12SL7 the Encore is a little sedate with some apparent sub bass roll off and a decrease in treble air, with the Sylvania, there's a bit of harshness in the lower treble that can be a bit grainy or sibilant. My favorite tube is the Siemens 12AT7, using an adapter; my impressions will be from that configuration.

Moving pictures (2015 Sean Magee remaster) is a superbly recorded, mixed and mastered album. The vocals, guitars, bass guitar and drums all have equal space in the mix. The Encore has a good sense of air on the opening cymbal crash in Tom Sawyer; the guitars have a natural, realistic timbre and the bass guitar is agile and well controlled. The Camera eye has a lot of layers once you get in to the 1st verse. the combination of electric guitars and mandolins is well resolved and layered, never seeming smeared.

Periphery's "The Bad Thing" is a crushingly heavy, de-
tuned djent tune that is well recorded and mixed yet heavily compressed. The Encore presents this like a punch in the face (in a good way). When the bass drop hits about half-way through the song, the Encore's bass response plumbs the depths of the recording.
Opeth is one of my newer favorite bands, and Ghost Reveries and Blackwater Park are two of my favorite albums from said band.
Blackwater Park was remixed by Steven Wilson and I folded back the 5.1 mix into stereo. This version is much more clean and clear than the original mix and master (which was a bit harsh and grainy, particularly in the treble). The hi-hat cymbals are particularly clean and the guitars have a wonderful body to them, free of any harshness, slightly sweetened by the Encore's presentation. The Double bass drums on "The Leper Affinity" are lightning fast, and the Encore (with LCD-3) was more than up to the task of keeping pace.Mikail Akerfeldt's vocals are primal while growling and soothing when clean.
Ghost of Perdition, from Ghost Reveries, is a brutal tour de force of brutality and progressive instrumentation. Often switching from full bore assault to milder, more progressive interludes.I think rockers would love this amp. The amp presents these dynamic swings ably.

I'm a total John Williams whore, and my favorite recording from the original Star Wars Trilogy (not my favorite film) is Return of the Jedi, included as part of the Star Wars soundtrack boxed set. The opening fanfare is bombastic and wonderfully captured here, with strings, horns and percussion perfectly mixed with a very dynamic mastering. Through the Encore and LCD-3, the recording takes on a greater sense of realism and a rich timbre.

In Conclusion, I highly recommend this amp if it fits in your budget. It is fast, transparent and not your stereotypical "syrupy" tube amp. It imparts greater beauty to any recording played through it. I find it competitive with offerings I've heard from Cavalli (liquid Crimson), Schiit Mjolnir 2, Rag) and Decware (Taboo mk IV). It is expensive, but worth it.
Reactions: JoeDoe, klyrish, vonnie123 and 6 others
Read more…

I recently purchased one of these. I really like it thusfar. Thank you for your review.
You must log in or register to reply here.