Today we're checking out the JAAP from Alpha & Delta.

In the mid 90's while working for Ericsson, Dr. Jaap Haartsen created Bluetooth as a wireless alternative to RS-232 cables. You might be familiar with them as those chunky cables with trapezoidal connectors that were so commonly used for computer monitors prior to HDMI's widespread roll out. Bluetooth has greatly evolved since then and is commonly found in everything from cars to smart fridges to smart phones. Thanks to Apple's constant “innovation”, phone manufacturers have been removing headphone jacks from their devices forcing users to either buy annoying, fragile dongles or move to Bluetooth devices.

Alpha & Delta has responded with the JAAP, appropriately named in honor of Dr. Haarsten. Does the JAAP make the move to wireless an inconvenience or is it a smooth transition? Let's find out. 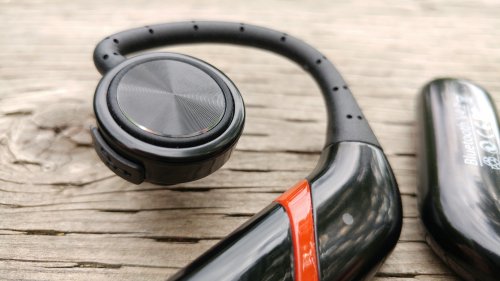 Thank you to Dennis with Alpha & Delta for reaching out to see if I would be interested in reviewing some products from the brand, and for sending over the JAAP free of charge for review. The thoughts within this review and my own and do not represent A&D or any other entity. There was no financial incentive provided to write this review.

At the time of this review, the JAAP retailed for 89.00 USD: https://www.alphandelta.com/product-page/alpha-delta-jaap

I listen primarily to various EDM sub-genres (liquid drum and bass, breakbeat, drumstep, etc.), hip hop, and classic rock. While I enjoy a variety of signatures in my headphones I generally lean towards slightly warm with elevated treble and sub-bass, an even and natural mid-range response, with reduced mid-bass. The HiFiMan RE800, MacaW GT600s, and thinksound On2 offer examples of signatures I enjoy. 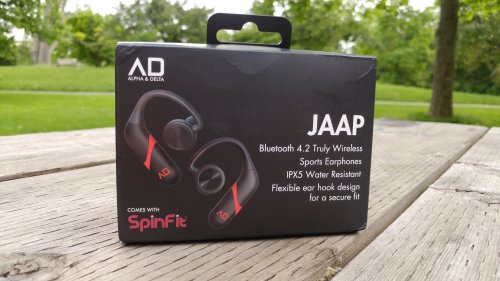 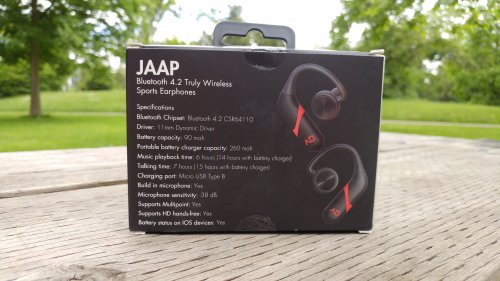 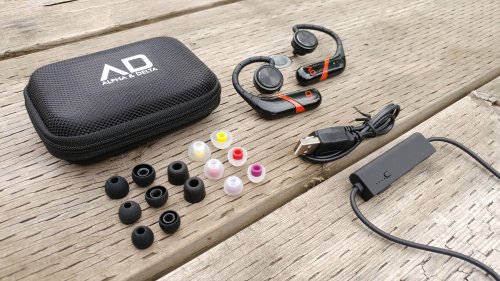 While the packaging isn't worth spending time talking about, being a simple black and red cardboard box with some specs and branding, the accessory kit is pretty decent.
The inclusion of Spintfits is always welcome in my opinion because they use quality materials and product a good seal. That last point is especially important with something large and somewhat ungainly like the JAAP. The battery bank is also an amazing addition, though I'll go over that when we cover battery life and performance.

The JAAP is constructed of three main sections. There is the bulbous black and red plastic portion hanging off the back which nestles behind your ear and houses most of the electronics. Attaching this part to the driver housings is a flexible rubber/plastic (?) guide that feels extremely tough and resilient. Last are the plastic driver housings which also contain the micro-USD ports. The ports are covered by a simple rubber door that slides in and out of place with only a slender strip of rubber keeping them from falling away completely when moved out of place for charging. The plastics are dense and durable feeling but have a muted sheen to them which doesn't look particularly attractive up close. Still, the overall construction reminds me of the SoundPEATS Q16 but with a bit more attention paid to styling. A&D managed a good balance of form and function here when it comes to material choice and design.

Once in the ear the JAAP doesn't really do much to offend. Getting them in place is initially a bit of a challenge. At least until you're used to the process of wrapping them around your ear, then twisting them around to find a secure seal. Once in place, I found them very stable and free of hots pots. You can vigorously shake your head and they don't budge, a very important quality for a fully wireless earphone to have. Even more so given the JAAP is rated IPX5. You can't submerge them and expect them to survive, but you could wear these in the rain without too much worry of adverse effects. This rating also means you can sweat like crazy and they should take it without complaint.

Passive noise attenuation with the JAAP is about average. With the included medium Spinfits installed and music playing at reasonably low volumes, voices from those nearby are slightly muted but still audible. Clacking from keyboards is muted too, but again, not eliminated. Tossing on the included foams tips improves thing incrementally. 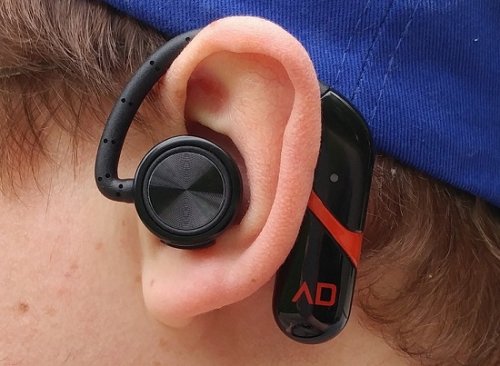 The JAAP is rated for 6 hours of battery life. Pending you're not listening at ridiculously high volumes all the time, it's plenty achievable. Alpha & Delta also includes a charge pack that is theoretically capable of extending the JAAP's battery life an additional 8 hours. This is the only product I've come across that allow you to use the earphones while they're charging which is a nice touch, though it does mean you've got a somewhat ungainly charger hanging around your neck.

For the purposes of this review, I tested the JAAP with four devices; Shanling M1, F.Audio S1, LG G5, and an Asus FX53V laptop. The JAAP had some serious issues getting a stable connection with the S1, an issue I more attribute to the DAP than the JAAP itself. The S1's Bluetooth feature seems like a bit of an afterthought and only seems to communicate well with a few select devices. The Shanling M1 provided the best experience. I can't think of a single drop during normal use. The JAAP's stated 30ft range is the norm, and feels achievable in an unobstructed area. Range dips to around 15-20 feet depending on what's blocking line of sight. For myself that's fine, but those who want more freedom would be better off looking into the Optoma NuForce BE6i, pending you're willing to have the ear pieces connected via a flat cable. My LG G5 and FX53V both performed about the same. Easy enough to pair with very few dropouts. The JAAP's consistently reliable connection is a clear strength. 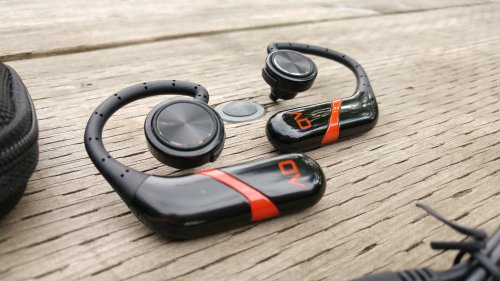 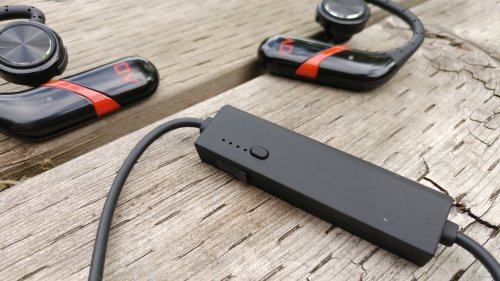 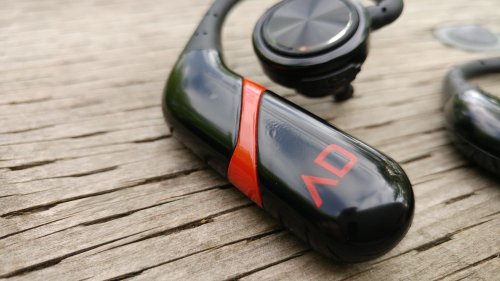 The JAAP comes out swinging with big 11mm drivers that feature a bass forward, v-shaped signature that I think is plenty suitable for a sports focused product. It does a great job of pumping you up and keeping you entertained, a good thing because they're not the most musically accomplished fully wireless product I've come across.

Bass is huge with deep extension and lots of sub-bass rumble. Mid-bass is prominent too, rife with punch and solid impact on notes. It's all pretty well-textured, though not without a touch of grain tossed in. Decay is slightly long so especially deep notes tend to linger and rumble. This makes the JAAP a lot of fun with drumstep, dubstep, trap, and other bass-heavy EDM genres. The JAAP's mid-range is set back but retains solid clarity and coherence. There is some bleed from the low end that can muddy up lower tones, but it's not particularly distracting given overall resolution is already fairly average, nor is it a common occurrence in my experience anyway. At least the mid-range is free is sibilance to my ears. Treble is emphasized and fairly well extended giving the JAAP a sparkly, high energy upper range. Detail and clarity up there is pretty good, but made somewhat abrasive due to slightly metallic edge to notes that makes them a little edgy and somewhat abrasive. The JAAP's sound stage is large but flat with limited depth. As a result it gives off an in-your-head wall-of-sound impression that doesn't contain much in the way of a layered presentation. Separation is decent though, keeping them from getting congested with anything but the most busy of songs.

While I don't find the JAAP particularly impressive sounding, the way it is tuned works for the purpose. For normal people, i.e. listeners that simply want something clear and bassy to jam to while working out, the JAAP will be awesome. It's an entertaining listen. Those who listen more critically will be left wanting something with more substance and nuance. 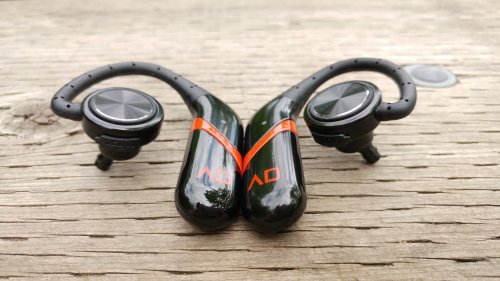 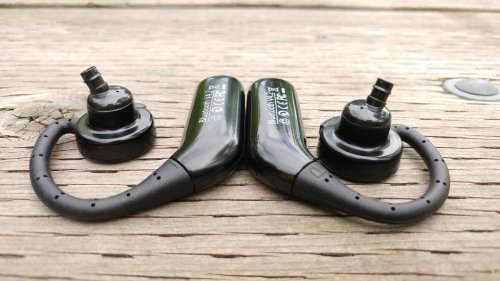 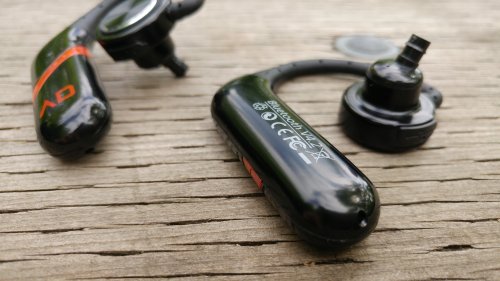 SoundPEATS Q16: The Q16 has a more utilitarian design and certainly isn't as attractive as the JAAP. I use the word attractive lightly since neither are lookers. Still, the JAAP's red and black accents and unique design adds some visual appeal that is lacking on the Q16. The Q16 gives you more control of your music. The JAAP is limited to basic controls like playing and pausing music whereas the Q16 adds in the capacity to control volume too. And for those that like their music uncomfortably loud, the Q16 is nigh impossible to beat. Nothing I've come across gets as insanely loud.

Comfort goes to the JAAP. The Q16 isn't bad by any means, but flipping back and forth between the two the way the Q16 clamps onto your ears means they're always making their presence known. The JAAP hangs much more naturally around your ear.

In terms of sound, they're pretty even, The Q16 has a very forward and aggressive signature. The JAAP is fairly aggressive too, but comes across slightly warmer and softer. That said, I found the Q16 a bit smoother. The JAAP's treble extension is better with the Q16 taking bass extension. The Q16 I found more balanced overall. The Q16 also has a more nuanced sound stage with more accurate imaging and greatly ability to display depth.

The JAAP's ace in the hole is that battery pack. They can both achieve 6 hours of use off a single charge but once the Q16 is exhausted you need to find a USB socket to refill. It doesn't have a battery pack or a charge case to extend it's life. Once the JAAP is out of juice, just plug in the battery pack and keep going.

Both are very good when it comes to connection stability and strength with the JAAP showing itself to be slightly more reliable.

Accutone Vega: The Vega seems to have significantly dropped in price since I first first reviewed it, retailing for 119 USD but found on Amazon, new, for 76 CAD, or 57 USD. Sonically, the JAAP cannot compete, in my opinion. The Vega is more refined, more detailed, more accurate, more balanced, has a wider, deep and more dynamic sound stage, and overall is just a much better listen. Like the Q16 in the previous comparison, the Vega isn't a sight for sore eyes either. It takes a form over function design with grey plastics and large rubber bumpers surrounding each ear piece. The JAAP is a lot more stylish.

Where it cannot compete with the JAAP is in battery life. The Vega is pretty abysmal here. Two hours of use after a two hour charge time, with a total of six hours of use possible via the charge case. If I'm going to pitch some excuses, the Vega is much more compact, comfortable, and convenient to carry around since everything you need, minus the USB cable, can be contained and carried around in the charge case.

The JAAP is great for someone that wants a fully wireless earphone with good battery life, a stable connection, and a secure fit. It's durable and the included battery pack adds a lot of additional value. The inclusion of Spinfit tips are welcome too since they further aide in getting a great seal so you can maximize your enjoyment of this earphone. While not the most technically proficient fully wireless earphone, the JAAP's bassy signature pumps you up and puts you in the mood to go do something.