Menu
Log in
Register
Install the app
You are using an out of date browser. It may not display this or other websites correctly.
You should upgrade or use an alternative browser.
xDuoo TA-20: improving TA-10 amplification with a 100% balanced design

After reviewing the interesting TA-10 amp & DAC from xDuoo, with a single preamp tube, I've tested the TA-20, that promises to step up its amplification design by using a fully balanced design, with a separare preamp tube for each stereo channel.

The TA-20 doesn't include a DAC, but I'm reviewing also the new updated xDuoo XD05 Plus portable DAC/amp, and I've found that it's a very interesting couple. You get the best on your desktop with the added value to go mobile with a very high quality solution.

But let's see how the TA-20 performs with my favourite music, starting with this exquisite version of Detour Ahead from Chuck Israels. Impressive.

I asked Steven from Xtenik Audio to send me the xDuoo TA-20, and as usual he has sent it to me in exchange for my unbiased opinion in a few Internet forums that I usually participate. If you're interested, it's available at his online shop for 366.99 USD (330 EUR at the actual exchange rate). It's a bit more expensive than the TA-10, priced at 290.90 USD, around 262 EUR.


Externally is very similar to the TA-10, with two 12AU7 tubes instead of one and a slightly different colour. I don't know if this colour change is intentional or if it depends on the batch of the anodising process. The finishing gives a sensation of good quality, elegant and my only complain is that it's very prone to finger prints. Nothing really important as I like a lot its design, though this is a very subjective matter. A big transformer in the back, two tubes in the front and a big volume knob that also makes the function as a source selector.

On the back we see also some differences with the TA-10. The digital inputs (USB and SPDIF) are gone, but you can still get two analog line inputs with RCA connectors, and also a XLR input that I can't test because I don't have any balanced output in any of my source devices.

As the TA-10, it also includes a line output, so you can use it as a preamp integrated with your main Hi-Fi gear. 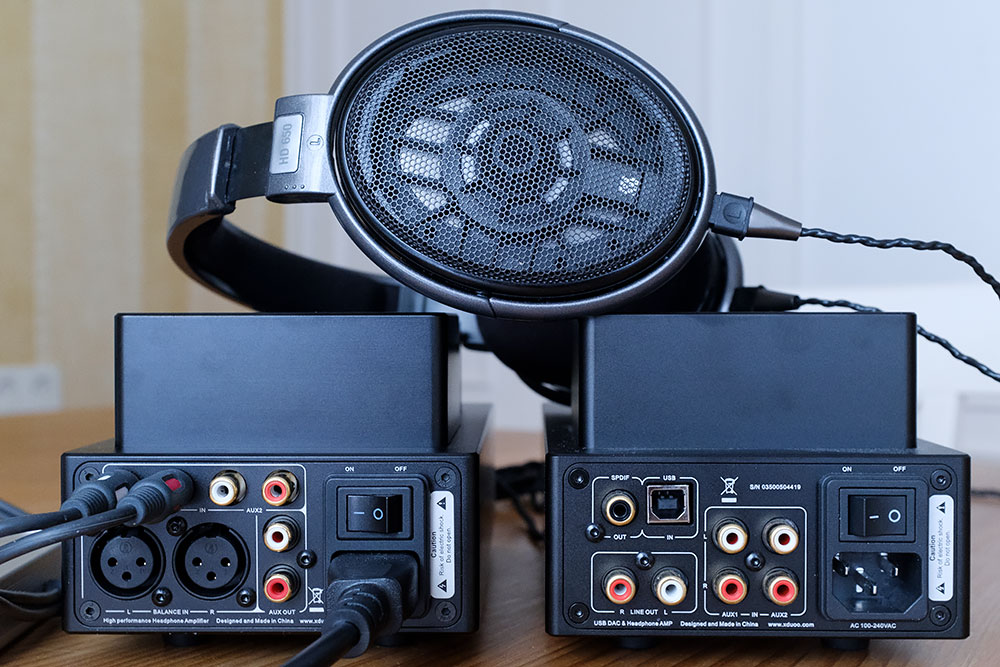 Having an amplifier and a DAC is a great advantage for the xDuoo TA-10 because it's very convenient. You don't need any other device on the table, just connect the power and USB cable and you're ready to go. And being able to change the tube gives you easy access to change the sound profile. After some careful listening, the Mullard NOS has been my choice with a very rich sound. 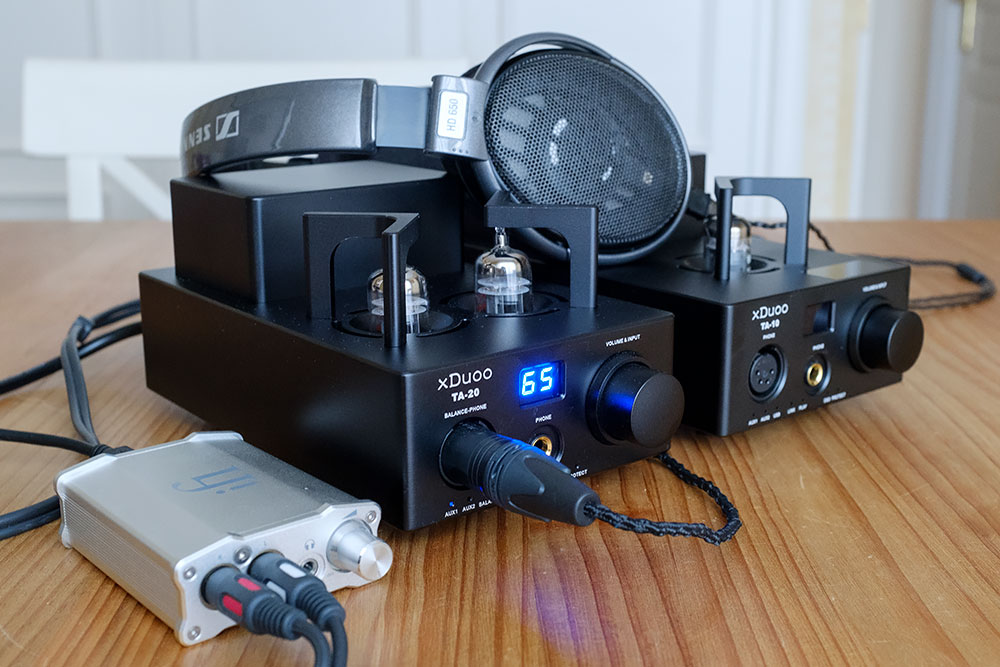 So I'm using the TA-10 as an amplifier-only setup, so I've looked for the TA-20 to see if it improves the sound as an amplifier with a 100% balanced design.

And it does improve it for sure! 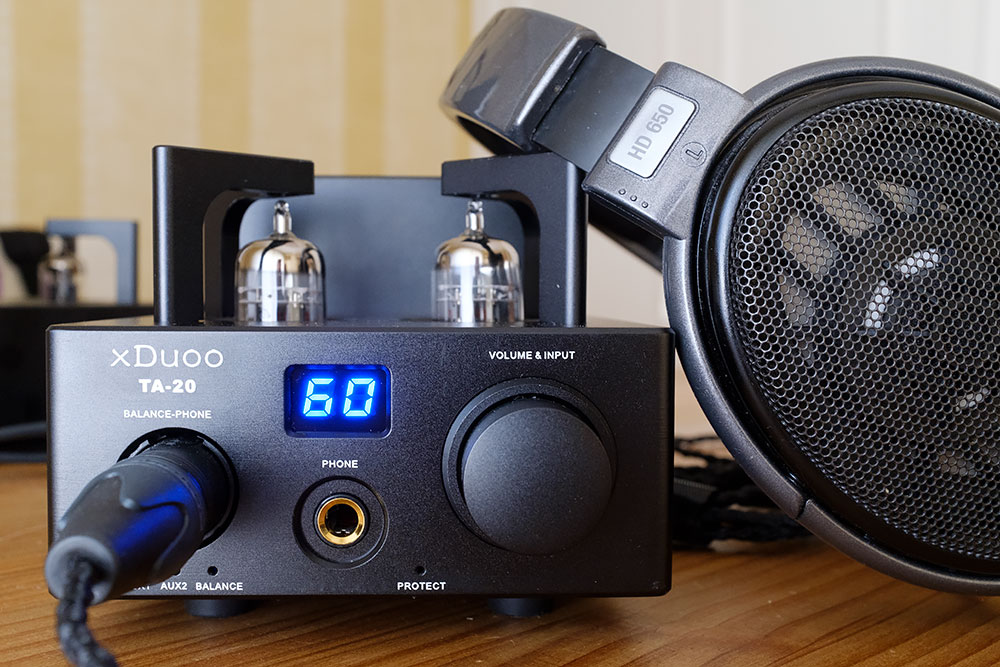 Balanced interconnections are usually used in professional setups with long cables, and their design is conceived to avoid noise interferences, making the signal go separately in both channels, phase inverted at origin and inverted again on the output stage, so noise is discarded.

An image speaks by itself better than me...

There's not only a cleaner signal; you also get a volume increase and it's being said that you also get greater dynamics. Comparing it to the single ended output, I choose the balanced. It's not a big difference, but it's noticeable enough to appreciate an improvement.

The TA-20 design makes that each stereo channel is treated separately, in separate circuits with an output tube for each one. That what makes the difference with the TA-10.

Regarding sound and comparing both units performing with the included 12AU7 tubes, I've equaled the volume level (65 steps in the TA-10 vs 60 in the TA-20) and i've found out that the TA-20 has not only more "slam", but also more control and detail, with better instrument separation.

It seems thet my beloved Sennheiser HD 650 has no end and they improve as you get better amplification.

And the sound can be improved even more by changing the tubes. I'm looking for a pair of NOS Mullard tubes as in my TA-10, but I will be testing also other tubes to see how the sound changes.

More about this soon...

Carlsan said:
Any updates on tube changing?
Click to expand...

Also interested as well as I recently acquired the TA-20. I tried a couple vintage RCA and Sylvania tube sets and these are an improvement on the generic/stock 12AU7 that come with the amp.
- Later, G8tor
FLAC'ing it with Foobar on RME ADI-2 DAC/Modius/FiiO K9 Pro DACs to THX AAA-789, alternatively using hybrid tube-amp xDuoo TA20 with Aeon-2 Noire, Ether CX, TR-X00 Mahogany, HD58X Jubilees, LCD2-Classics or ZMF Aeolus Bocote LTD and Cherry Atrium.
You must log in or register to reply here.