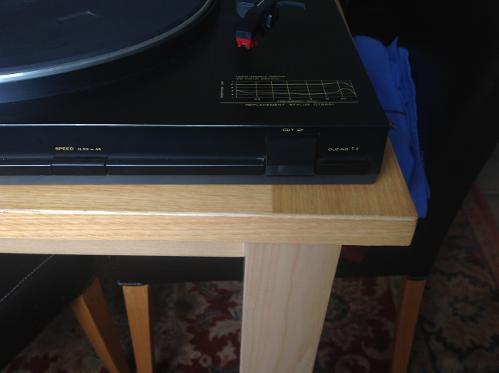 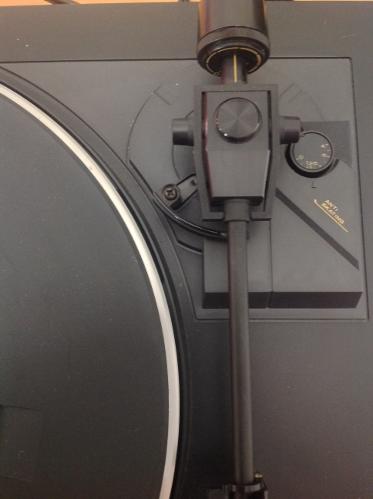 Got a problem with my Marantz TT151. The issue is that the turntable spins when the lever is in its holder. Then when you move the arm over the 12" vinyl zone it stops spinning, then when the arm is moved into the 7" zone it starts spinning again! (I can post a video if this is not clear!)

I'm a real Vinyl noob so any help is greatly appreciated!

It seems that the arm is rotated 360 degrees the wrong direction.  Can you gently lift it, while the table is not moving, and rotate it around.  It is either that or on backwards so the on position has become the off.
There are only two types of headphones; those you like and those you do not.

The angle of the arm, as it is installed into the round bracket, is supposed to rest in the off position.  If it was installed backwards, with the angle the other way, then the arm will angle towards the on position by default.  Is there a screw or other fastener on top of the arm where it meets the post that you could unscrew and reset the arm?
There are only two types of headphones; those you like and those you do not.

If memory serves me right, there is a clamp attached to the bottom of the arm, which has a lever on it that makes contact with a switch assembly that is part of the auto start/stop and auto arm lift operation. The two buttons on the front panel of the turntable that are for selection of 7" and 12" are there to prevent the platter from rotating when the 7" operation is selected for instance.
What happens is that the clamp attached to the arm can be forced out of position since it is not molded onto the arm. It is just screwed onto it and can be rotated and adjusted to calibrate the exact start and stop position of either a 7" or 12" record size. A separate pair of push buttons select the record speed.
From your fault description it appears that the aforementioned clamp has been moved out of position, causing it to be in the wrong location to detect whether a 7" or 12" record is being selected from the push buttons on the front.
Recalibrating the correct position is not too difficult, as long as you don't use a heavy hand. The first thing that you would need to do though is to remove the stylus assembly if you know how to do that. Otherwise you are going to end up with a bent cantilever whilst doing the recalibration... Next, you'll need a 12" record that is of zero value to you, and which you don't mind if it gets scratched any further. Next set the TT for 12" and 33RPM. Then put the arm (minus stylus) on the 12" record and move it slowly towards the center of the record up to where the edge of the paper label starts. The arm lift should start to operate by this time and lift the arm up. If it starts to lift too early, then lift the arm up and move it all the way back towards your right hand side to as far as it will go before you detect a resistance. Now give it a little bit more of a pull to the right, against the tension you just felt. Be gentle but firm. The arm should move. Just move it for let's say 1 to 5mm at a time. You don't want to overshoot in your calibration. Now try the process from the beginning again to see if the arm will lift just before it touches the label on the record.
If instead the arm doesn't left up by the time it gets to the label, push the arm towards the center of the record by about 1 to 5mm and then try again till you get it right.
A more precise method of recalibration would require unscrewing the bottom of the turntable and adjusting the position of the clap internally. But that requires a lot more care  and some technical training/experience on how to go about that without getting electrocuted.  The mains wires coming into the plastic case are bare at the point where they are soldered onto the PCB. So I won't even attempt to describe on here how to fix the problem that way on the forum just in case someone copies it and accidentally kills themselves through electrocution.
Share This Post
post-10588226
Post #5 of 8
3

Hi, That seems too complicated for my liking...! I may have to ask someone who knows what they're doing to take a look.  When you say the buttons for 7" and 12" I don't see those. I have attached a photo of the arm as I'm not really sure what I'm looking for.

Sorry for being a complete noob! The 7" and 12" selector buttons are on the front panel so to speak. That would be to the bottom of your picture, and then look downwards. Or in other words: stand about one meter away from the turntable and look towards it. The buttons should then be facing you. There should be 4 or them. the other two are for 33 and 45RPM.
Share This Post
post-10588790
Post #7 of 8
3 That's odd. Yours only has the 33/45 RPM button. The one I know of and that we sold had an extra button for 7" and 12". I'll see if I can find the manual online in case they made more than one version for different markets.
Share This Post
You must log in or register to reply here.