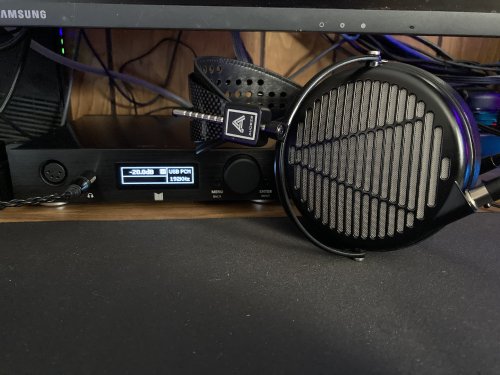 Acquired some Audeze LCD-MX4 headphones and a Monolith 788 THX amp this week..

I was really questioning and afraid of the Audeze cans as I heard from reviewers that they can ruin your music as they are studio mastering/reference headphones, thus make any flaws in the recording noticable, etc.. but ever since I received them on Monday, I haven't been able to take them off.. they sound amazing and really do reveal every single hidden detail of songs.. Maybe it's just my musical tastes, but so far nothing has really sounded bad with the exception of one band I listen to named Summoning, sounds very messy, and also Led Zeppelin's Stairway to Heaven where the intro sounds terrible as there's appears to be a flaw/issue in the recording caused by the guitar (left track) over the very audible keyboardist/Mellotron's (flute) monitor (right track) listening to the guitarist's track and the combination of both guitars not agreeing with eachother when combined in your head seemingly causing a reverberation or out of phase-like issue.

Then my experience with the LCD-MX4s improved greatly once I acquired the Monolith THX Amp this morning! It was an upgrade for my now previous PC desktop dac, which was a Micca Origin G2! So been having a great listening experience all day today, even discovered an hour ago, the previous bad sounding songs by Summoning, doesn't sound as bad as it did through the Micca dac with the LCD-MX4s... Led Zeppelin's Stairway intro unfortunately still does

Anyways, I am very happy with my new acquisitions and last thing to mention, compared to my previous Planars, Hifiman Ananda, Hifiman Sundara, Thieaudio Phantom, and Fostex T50RPMk3 (Mayflower mod), none compare to the Audeze in resolution, detail retrieval, and imaging

The Anandas are close, but not quite on the same level.

p.s. I am still waiting for a custom balanced/xlr Audeze cable to come in the mail.