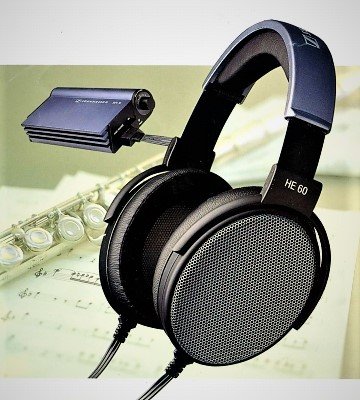 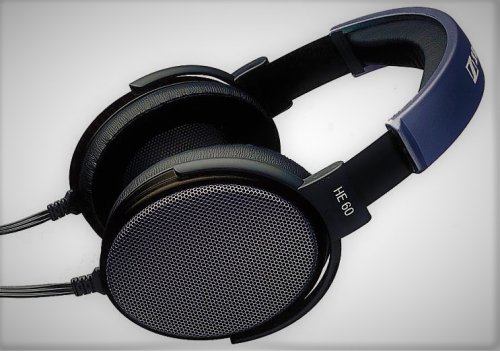 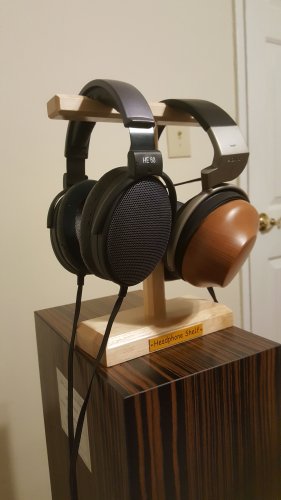 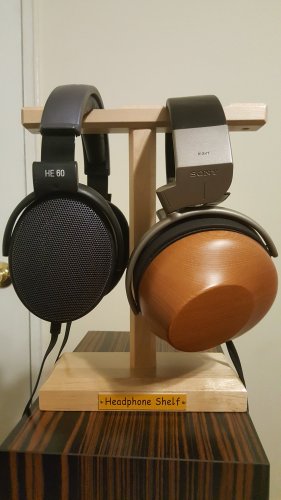 You are using an out of date browser. It may not display this or other websites correctly.
You should upgrade or use an alternative browser.
Sennheiser HE-60 ''The Legendary Baby"

SENNHEISER - A German manufacturer, established in 1945. Sennheiser first headphone was the first open-air headphones HD-414, it was introduced in Japan in the early 1970.

1991 Sennheiser decided to released a Statement product. A product system that no other company can match and compete with, it was called Sennheiser HE90 at a price of $12,000.

Christmas 1993 Sennheiser decided to release a more affordable Orpheus. And they did. it was Called Sennheiser HE60. It was a limited edition model 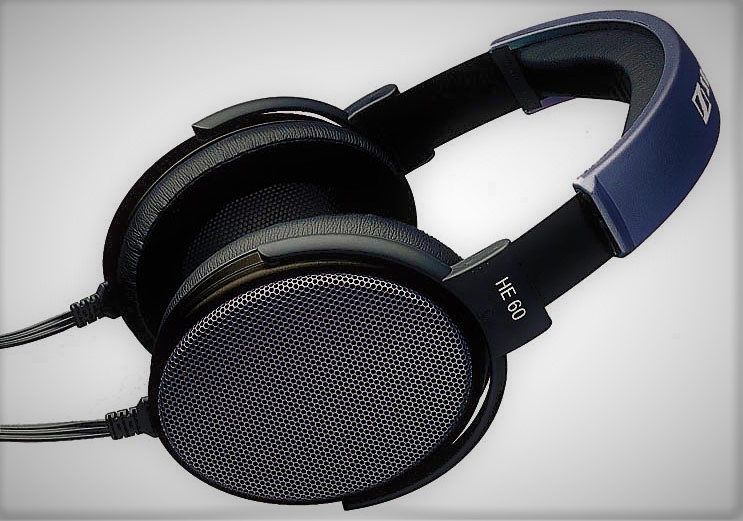 Highlights:
- diaphragm consists of an ultra-thin sheet of polymer vaporized in gold
- The HE60 was sold with its amplifier, the HEV70.
- Resembles the HD580 series
- Electrostatic transducer

The weakest link for the HE-60 is surprisingly the amplifier that is supposed to be pair with!
Once properly amplified with a 3rd party amplifier, The Baby Orpheus can quickly grow up to be an adult Orpheus in no time.


Sennheiser HE-60 Sound: Mids king? Maybe? Slightly on the bright side. Slightly thin and lack impact. This is not a warm and coloration headphone almost the opposite. Slightly bass light. No harshness, treble is controlled, grain-free, and the Sound stage is excellent.
Overall, an extremely tuneup version of the HD600. A very balanced and neutral beautiful headphone. 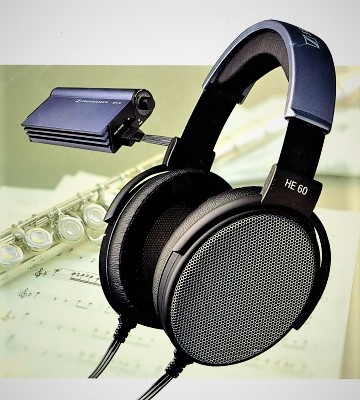 The heart of this system is a revolutionary diaphragm made of a foil polymer material which is then vapor coated with gold one molecule thick on either side. This material and gold coating process reduces the mass associated with typical electrostatic diaphragms, which in turn decreases signal response time for greatly increased inner musical detail.

Supporting this completely open-back headphone driver system is a pair of highly insulating polymer-fiber counter-electrodes, also gold coated on the outermost sides for voltage polarization. The HE60 has been given opulent ear cushions and headband made of leather and velvet ensuring hours of listening comfort.

(Sennheiser official report on the HE-60)

I heard these and their big brother many years ago. I felt that the amp was under powered (same issue that the Koss ones have) I think most people there felt the same way, I always wondered how much better they could sound with a better amp. I recall that they had a plug that was different from the Orpheus and Stax headphones at that time.

Trust me, I really wanted to plug these into the big tube Orpheus amp, but sadly I couldn't.

Thanks for the memories!

protoss said:
Absolutely right on the EQ. I notice when I EQ the HD800, it's sounds great but fake almost. Almost feels like it's taking away the magic of the headphone. I am in the mindset of if you have to EQ any headphone than it is a crappy headphone.

I wonder if you like the HD800s? It seems like you like killer detail headphones? And if you want to go Staxs for some killer details try out the L700. It is somewhat more affordable than most Staxs.
Click to expand...

I have a HD800 with me, and they are some great headphones, I put them on, and wow... sounds amazing, but some songs later I'm almost always thinking I wonder how this song sounds on the he60. I use my HE60 almost 90 percent of the time, so that should tell me what I need to know, I guess. and yes the STAX L700 are on my interest list, I 'v heard a bit about them, only thing is I never found the lambda shape comfortable enough so even if they are really good I don't think I will be able to enjoy them, if you know what I mean.

Hi all, new to the community... I would like to say that I agree entirely with all observations made during this thread... especially when thebrunx says: "... the pianos man that's where they are". Oftentimes when focusing on the piano there is a great sense of what I might consider ideal reproduction: that being the complete transparency, as if the equipment between the instrument and the ear is simply not present. I have often been surprised by the level of detail communicated through the HE60's... including the concussive force of the hammer on the string, the pace of the transients and the sustain of the note. Stringed instrumentation such as the violin or cello are represented at a similar level of realism. I am a big fan of the way in which the HE60's resolve complex orchestral pieces. At times, during live performances one can get a real sense of the acoustics of the individual environment. Up to now, I have only experienced these phones using the HEV70... so I am very grateful for the input of all in suggesting equipment which may enhance my listening experience with this special set of headphones.
4

and after Longer experience, I would Like to add that there is no way I would ever replace a HE60 for a HD800 regardless of price. No, not even close. For me, HD800 is just another good headphone. And the HE60 is an Ideal headphone, and all that remains is to keep upgrading the rest of the chain. I was only happy listening to the HD800 because I knew I have the HE60 with me, if that makes sense.
Last edited: Mar 1, 2018

HE60 and Edition X v2 (HEX) are the 2 main headphones for me atm.
They complement each other by being each others opposite. The HE60 is bright, the HEX is dark; the HE60 is analytic, the HEX laid-back. Both are true quality headphones.
I see deaf people

I'd probably say something I shoudn't, but being the music lover/audionoob I am I still will:
Bought a Schiit loki mini (tone control) which helps me out changing the tone of the HEV70 like I want to without physically changing the HE60 / needing to invest in a new amp.

A bit more bass, a bit less treble and oh my ...
The HEV70 can handle it since it does not distort at all and the Loki mini only changes the tonal curve.
I see deaf people

protoss said:
For everyone getting a bright signature from the HE60. You guys should tube it !

Have you had the chance to compare the HE60 with 007T or the T1? Even perhaps the 006T? I’m looking for more warmth and slightly more bass emphasis
4

HE60 with a good turntable is the pinnacle of sound reproduction. Thank me later.

Location
We The North!

Hey guys, utter NOOB here, I had a good read of all the comments, which are making me drool! Esp, the one about how the HE-60 crushes the HD-800, I own the Stax SR-007 Mk. II and do like it, but it is sometimes too romantic a sound signature for me. I think the HE-60 will remedy that quite well. Is modding the HE-60 a relatively simple option and would a Stax pro bias connector work on Stax SRM amps? I have experience with the Stax SRM-006Tii, it drove my SR-007 Mk. II well but overall the sound was too lush! Wondering if anyone on the forum has had first-hand experience with of a modded HE-60 with the Stax SRM-006Tii (or another variant)?