Though the recent Sharp MD didn't have the bass/treble adjustment. I don't know if you know this model number: Sharp MD-SS323. It features 13 DSPs and bass/treble adjustment (plus 3 surround mode). It works wonder with all types of music. I have this player and I can justify that is really sound better than my R900, which is now is with my girlfriend. My sharp 323 really combine the headphone out characteristics of my D-303, D-555, and D-515 into a real compact player. The 323 is my Avartar.

Reading a review of the Sharp MT-877, I didn't like this.

Information of my beloved md player can be found here. It was top of line sharp in 1999 and not MDLP compatible. The price was the same as the MZ-R90. I imported my from Japan. The unit has LCD backlit on both remote and unit, and 13 DSPs with 2 user presets (bass/treble + 3 surround mode). The battery is Li-ion and can be recharged/play simulatenously....that is a very nice features. Plus, li-ion has no "memory effect." It also has a slot in mechanism. I really think this is the D-555 of md players. Though, I think it is more impressive with it smaller size and 40 secs anti-shock system. It works wonder with my Sony mdr-e484, 888, and grado sr-225. I don't know if still can get it anymore.

I strongly suggest you get past bashing other people's music preferences on this forum if you want to hold a decent discussion. This is one thing that is absolutely not tolerated here.

For the record, if you don't properly equalize current day Sonys, then yes, they sound like turds. Comparing Sharps flat with Sonys flat, yes Sharps kind of blow them away. But the proper adjustments to a Sony can bring it very close to a Sharp.

Bottom line, I could care less. Get whatever you want, listen to whatever you want. Different strokes for different folks.
How often is peace a place within your mind and your world? Learn to maintain a peaceful state of mind always. If you do not, it will cost you in the quality of how you experience life. If you are not at peace with yourself, you are at peace with nothing.

Vertigo - you can't brush it away like that. And funny how when the V700bashers were criticizing my taste in music - not that I care - but such comments were nowhere to be seen.

The yardstick of what you find 'good to listen to' is determined by, surprise, what you listen to.

What I said about 'weak-ass' music was, OK, a barb - I apologise for that and the fact that I had a grin on my face while writing that - but it's a valid point. If that's (your profile music) what you really listen to most of the time, it's probably fair to say that you don't have much in common in terms of what you listen to compared with the average teenager / twentysomething (I would imagine a lot of the people here), so as a point of reference it would be a bad comparison.

When I travel, I usually pack a smorgesbord - E.g. Howlin' Wolf, Cornelius, Sense Field, Rufio, Paganini, Ryan Adams, Bach, Lost Prophets and maybe some Fluke to finish it off.

Given this variety, I still think the as you say, slightly bass-heavy Sharp sound - not just in terms of loudness although that's a factor - does greater justice to a wide variety of music compared to the Sony units - EQ'd or not. Most portable headgear (including that MX500 you have for example) is treble-heavy in any case and anything other than a flat treble response will bring unnecessary sharpness to the sound.

IMHO, the Sony units with EQ are suitable for classical, crappop, etc. (I'm not putting them in the same category, just with the same sort of sound compatibility) and ear gear which depresses treble response (such as the EX70), as well as low-powered earbuds. Certainly the Sharp units win on versatility as there are more options as to what can be driven from them without having to buy an amp.
Still Team V700 (in spirit)
Irony does not mean "Like Iron".

Yes, I don't have much in common with the average teen. I call that a good thing. What the average teen listens to nowdays I would personally think is crap, but I would never tell that directly to someone else. I highly respect every individual's music tastes regardless of what I think about it. Without that respect, the foundation for discussion on forums like this one is completely lost, and soon we degenerate into blaming each other's music tastes instead of discussing the hardware.

With that said, if one listens to rock (something I detest), then yes, Sharps are better, period, because of their bass. Incidentally I know acidtripwow listens to a lot of jazz, so by your definition of what Sonys are suitable for, might not a Sony fit him better then a Sharp?

I'd actually recommend a Panasonic soundwise for acid. They sacrifice at the frequency extremes but have a very nice lush warm midrange. Great for those jazz vocals.
How often is peace a place within your mind and your world? Learn to maintain a peaceful state of mind always. If you do not, it will cost you in the quality of how you experience life. If you are not at peace with yourself, you are at peace with nothing.

Vertigo-1, what do you mean by Panasonics sacrificing at the extreme frequencies?

Don't know about the Panasonics - an owner can comment on them I'm sure.
Still Team V700 (in spirit)
Irony does not mean "Like Iron".

Panasonics don't have as much treble as Sonys or Sharps and their bass is on the rounded side. What they do have is a remarkable midrange. Which leads to Panasonic's motto that they stamp on their boxes, "the player with emotions". If one listens to a lot of vocal materials, they would do well to consider a Panasonic.
How often is peace a place within your mind and your world? Learn to maintain a peaceful state of mind always. If you do not, it will cost you in the quality of how you experience life. If you are not at peace with yourself, you are at peace with nothing.

I wouldn't say that my Panasonic lacks anything in the treble department...more likely in the bass!! Treble wise, it at least equals the Sony units I've heard, the R90, R700 and R900, but in bass, the R900 at least on "Sound 2", leaves it in the dust. I can't really comment on Sharp, I haven't been able to have a good listen, but on the MT877 and MT888 I liked what I heard.

My Panasonic certainly does not sound bad, I love its sound in fact, but my Aiwa is the best all-round sounding MD unit I've ever heard.

BTW, apologies to Acidtripwow for hi-jacking this thread of yours!

Thanks for all the suggestions, keep them coming. I listen to a lot of different music from Jazz to Hard Rock. The only music I don't really listen to is Rap and Country. Lately, I've actually been listening to a lot of old stuff from my much younger days. I found my America greatest hits CD is skipping on my favorite song "Horse with no Name." That's one I'll have to repair or replace. I may have to pick up a couple of MD units just to try them out and then see which one I prefer. Thanks for the Panasonic suggestion since I wasn't even looking at them.
Share This Post
post-158266
Post #28 of 57

Some MDs I'm looking at: 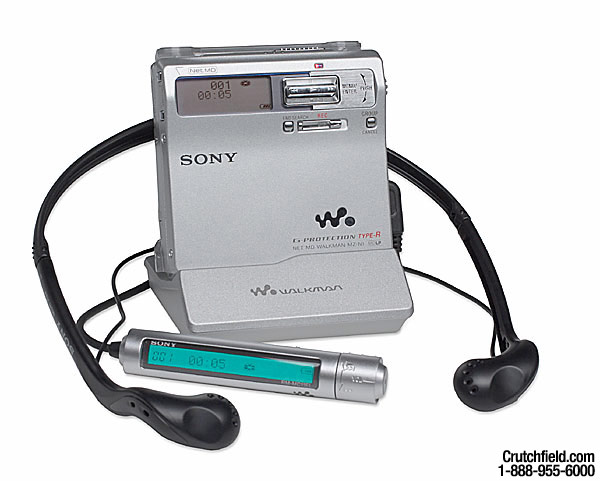 The MR250 is indeed drooltastic. And even if you do actually drool on it, the casing is 'anti-bacterial'!

Soundwise, I'd say from the specs that it'll be closer to the N1 than the MT880.

BTW, I don't care one little bit for the newer Net MD Sony MDR's as far as looks go. They look sort of cheap. My R909 has a business-like feel about it.