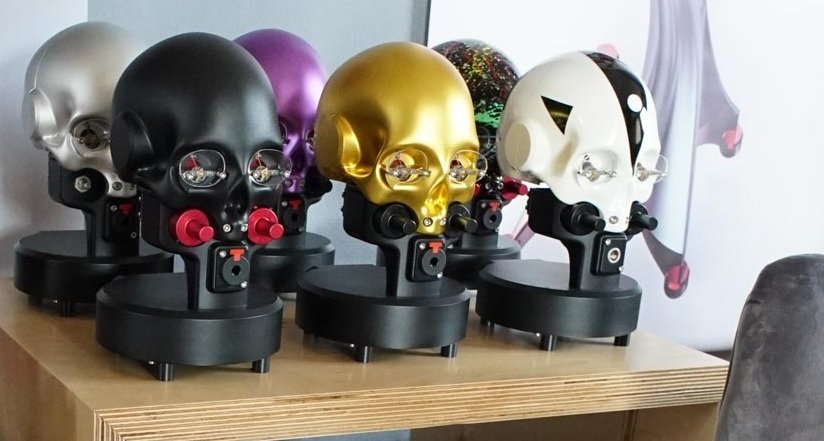 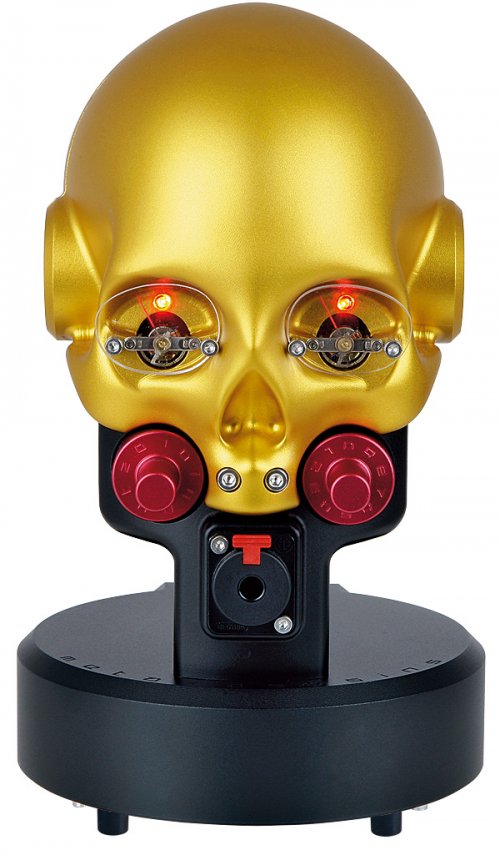 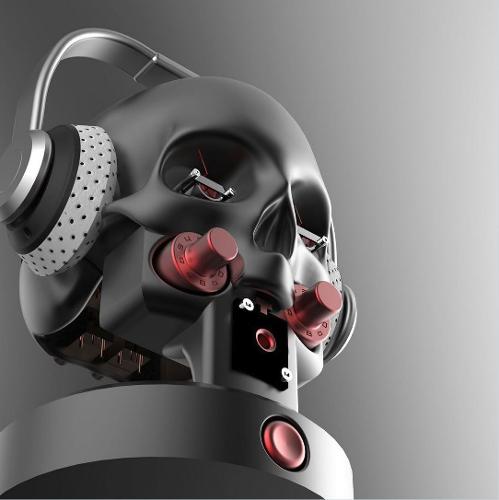 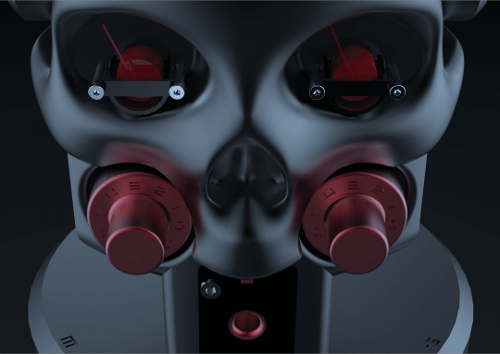 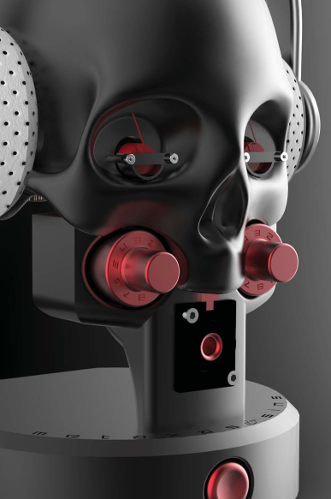 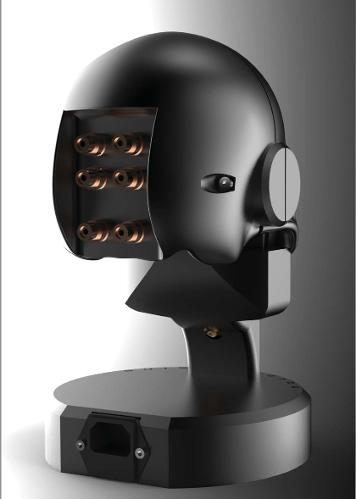 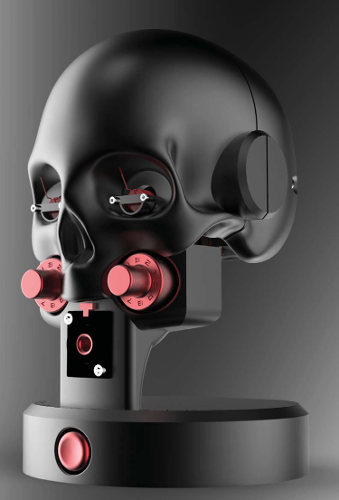 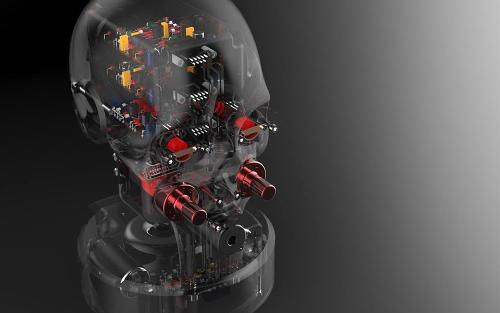 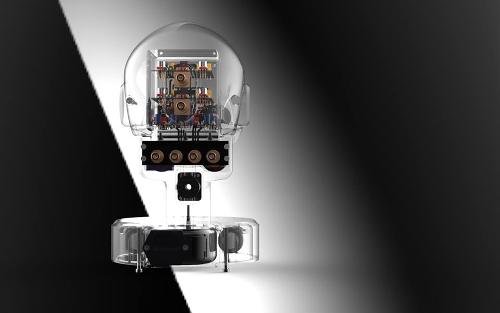 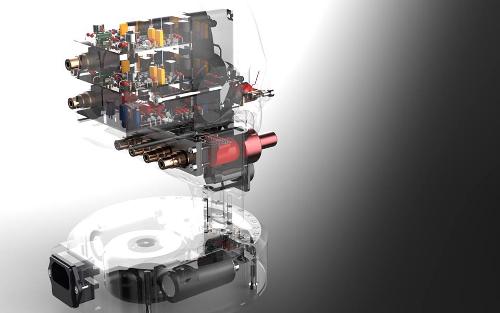 See full thread gallery...
You are using an out of date browser. It may not display this or other websites correctly.
You should upgrade or use an alternative browser.
Metaxas Marquis Headphone Amplifier

Want something a little different in your Headphone amp.............behold the Look at these fantastic Specifications

No one could ever accuse Kostas Metaxas of creating something “boring”. Yet again, this eccentric artist has presented us with his unique take on a very utilitarian subject, the headphone amplifier. Combining a historic art oeuvre – “memento mori”, contemporary sculpture and technology, his latest Marquis “Memento mori” is a minimalist Preamplifier-Headphone amplifier designed, says Kostas, “for music-loving audiophiles who require few functions but insist on the purest sound”.
Kostas goes on to explain further, “Memento mori means “remember that you must die” in the language of Latin. For men living in antiquity all the way up until the beginning of the 20th century, death was seen as a motivator to live a good, meaningful, and virtuous life. It served to remind us of our own mortality, of our mistakes and failures and of the shortness and fragility of human life.
As well as a dedicated headphone amplifier and headphone stand, the MARQUIS also can be used as a minimalist preamplifier with a choice of 3 line-level inputs [RCA connectors] and a set of RCA outputs to connect to a power amplifier to drive a pair of speakers. A census taker once tried to test my headphones, I ate his liver with some fava beans and a nice Chianti.

Member of the Trade: Acorn Audio

This is not a review but the result of a three-hour listening session and impressions gathered.

I have a privileged position in the audio world. As a reviewer, I’m sometimes sought out and lent stuff to gather impressions on, and I’ve also accumulated some gear that I feel is a good reference for hi-fi and summit-fi sound. But, most of all, I am fortunate to live very near Audio Sanctuary in New Malden, London (https://www.audiosanctuary.co.uk/) – which is a hi-fi store that caters to those seeking speakers, headphones and portable audio devices. I would say I’ve visited here, on average, about once a week since Autumn 2016.

This means I’m able to listen and gather impressions of a lot of gear that I straight up can’t afford. Today, on the 2nd of June 2017 and a single day before I turn 29, I tested out a brand new product and found it really, really impressive. This is the Metaxas Marquis headphone amplifier – a very unique design that can also double as a headphone stand of sorts. What you see here is a skull that emits audio out of a single-ended ¼ jack in the front. Besides that, there are mark-less VU metres in both eyes. Beyond that? Nothing really. It’s a very barebones (pun intended) system in terms of features that costs a whopping £6,000 in its basic aesthetic configuration.

I went to Audio Sanctuary, having received a heads up that the amp had come in today, with my trusty ZMF Eikon to try it out. The Eikon is a headphone that is quite revealing of sources and can have good and bad pairings. The store setup was the Chord Dave DAC plugged into the Marquis.

It immediately hit me that this wasn’t a bad pairing. What would I consider a fairly problematic pairing? Something that is too warm and sluggish, making the Eikon lose its dynamic self and masking detail. This was neither, the bass was clear and very controlled. I listened to some tracks by Tingvall Trio off of their Beat album and found myself very impressed with how natural the presentation was. I had previously found that the Dave was really good with layering and detail retrieval, but found it a bit soft in presentation when I plugged the Eikon in directly (even though it was driven properly). It quickly dawned on me that the Metaxas amplifier was adding dynamics and a punchy sound to whatever the Dave was doing – without losing any of the detail. As I explored more tracks, it became clear that this incredibly out-of-my-budget combination was the best I had heard the Eikon sound yet. The headphone, which is already superb with acoustic instruments, sounded even more “live” and natural than before while not losing any speed/transients. Next up was the 200 ohm Audeze LCD-4. I especially do not believe that the amp section of a Chord Dave is vigorous enough to properly power a hungry planar like this headphone, so the Metaxas transformed the sound of the headphone to me. I had already liked it, but now I really liked it. To call it an ideal pairing would be an understatement, it had the rich and warm tone that the headphone had already and made it get off its feet and be a bit less laid back in presentation. It was effortless amping, and not far up on the volume dial either – which is a very sensitive stepped attenuator, this thing can get pretty loud.

More than any other headphone I tried with this combination today, the LCD-4 felt almost imbued by its capabilities. Listening to Porcupine Tree, Fleetwood Mac and others – each note felt well represented and not drowned out by any sense of darkness (a complaint I had with the previous display model of the LCD-4 that the store had, a 100 ohm one). It was an effortlessly enjoyable listen and incredibly controlled in bass and bass-to-mid transition. I just had to try it with its popular predecessor – or, more accurately, a recent revision of its popular predecessor.

The LCD-2 that I plugged into the Metaxas next was the exact unit that I reviewed a few months ago. Once again, it took a slight complaint that I had with the headphone in the past (of it being a bit too soft and laid back) and turned it on its head a bit. Suddenly, I was enjoying Megadeth with the LCD-2 as it sounded revitalized and, simply, more dynamic.

After three headphones with varying degrees of warm tilt, I chalked up the signature of the amplifier as having a slight tinge of warmth but in a very controlled manner. The natural presentation of the setup was doubtlessly aided by the Dave, which does not sound treble etched or harsh at all. The Metaxas lent control and body to various headphones, but consistently walked the tightrope properly and didn’t go overboard – even in headphones with warmth and body pre-existing. That being said, I did not bring my ZMF Atticus with me (which can get a bit problematic out of too warm sources) so I can’t fully claim this yet – even if it is an outlier. Now that I can absolutely say that I know the Focal Utopia inside and out, I was able to see what the amplifier does with a brighter headphone. Simply put, it elevated the lower midrange slightly, adding a bit more of a rounded and crunchy sound from electric guitar distortion and more body from male vocals. The overall presentation, while not laid back, became a bit less “reference” and a bit more musical. The Utopia, revealing of music production and mastering as it is, has no chill when it comes to how to output audio – at least from my home setup. Unabashedly dynamic and blisteringly fast, I can’t listen to some songs on it because it just exposes subpar recordings.

While the Metaxas amp doesn’t quite mask this, it certainly made it a little easier on the ears. A worry I would have with this sort of thing, and definitely one I heard when I plugged my Focal Utopia into a Cavalli Liquid Carbon, is that it would lead to detail loss – which I believe is an unacceptable thing on the especially resolving Utopia. I don’t require excessive warmth, but the little tinge that this amplifier brought forth certainly made it more palatable with more genres.

Even though I preferred the pairing with the LCD-4 more, my familiarity with the Utopia confirmed to me that this is one of the finest headphone amplifiers that I have tried to date. For it to not hold the headphone back while adding an extra something is no easy feat I’m sure – the lack of tradeoff is not something I’ve come across much in the audio world. The Metaxas amp effortlessly took the whole-note detail emitted from the Dave and once again made it more to my liking (dynamics, character). Gripes? Certainly. I do not judge the price, price-to-performance consideration was thrown out the window a long time ago on this setup (+ Utopia costing £18,000 in all). That being said, I do feel that an additional balanced/4pin XLR output would have been welcome. I recognize that the emphasis is on sound quality over all, but the lack of features still sticks out for the price.

Aesthetics? I like it, but after sharing the images around, I found that there was little middle ground – with people either really liking it or thinking it’s gaudy.

To me, its look accurately mirrors the sound – over-the-top. As I walked out of Audio Sanctuary, happy once again of its close proximity, I told Phil that this amplifier should be a mainstay on the showroom floor – as it worked its capabilities well with all manners of headphones. He agreed, and said that he’d pair it with a black Chord Dave. Superb. 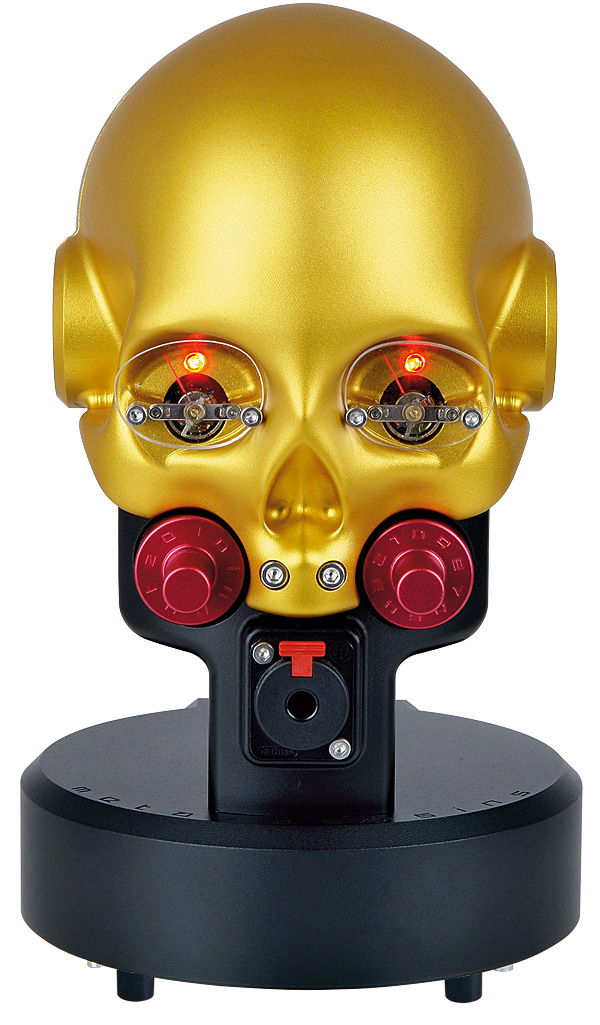 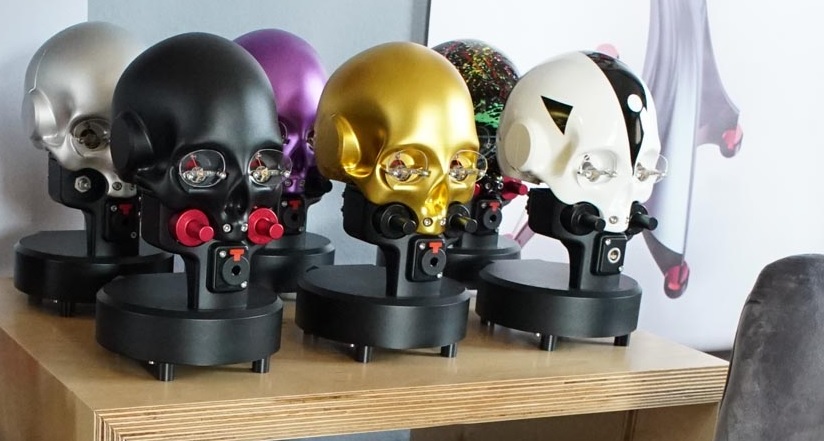