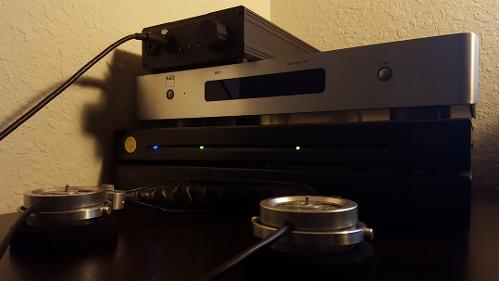 See full thread gallery...
You are using an out of date browser. It may not display this or other websites correctly.
You should upgrade or use an alternative browser.
Comparison: Modern DAC (NAD M51) vs. Vintage DAC (MSB Gold Link III)

I had some free time today so I decided to compare a recently acquired NAD M51 (second-hand) to a vintage (circa early 2000) MSB Gold Link III DAC that I have had in my possession for a few years now. The latter was a pretty highly regarded DAC back in the day, and with the additional power supply cost about what the M51 retails for today (~2K). All comparisons were done sampled at 44.1khz/16bit. My Gold Link does not upsample (it must be one of the earliest ones as future ones did so), so to be fair I didn't oversample with the NAD. CONS: Sound overall is on the thinner side (relatively speaking at least). Slight veil in the mid-range, causing the DAC to sound "polite". It's as if a thin curtain is draped over the soundscape. Presentation can sound somewhat disjointed at times (possibly due to the vast soundstage)… as if all instruments/sounds are separate entities floating in space rather than part of a larger picture. Highs are slightly rolled off/ overly polished (this could be a good thing though).

PROS: Soundstage is good, but lacking compared to the M51. Mids are sweet, silky and inviting. Bass is excellent and about equal in quantity with the M51, although possibly lacking a little extension and dexterity compared to the NAD. Highs are accurate and never grating. Dynamics are at minimum equal to the NAD, if not better. Detail is there, but doesn’t resolve like the M51.

Explanation: Whatever the MSB gives up to the M51, it more than makes up for by being more musical and engaging. I can hear the slight veil in the midrange that the M51 has immediately upon switching DAC’s and although it is not massive it’s bothersome enough that it landed the NAD in second place. To me the mid-range is by far the most important part of the spectrum, and the M51 doesn’t quite nail it. The NAD is a great piece of equipment, especially considering that it is built extremely well and includes every kind of input imaginable, but thus far it has failed to really suck me into the music like the older MSB.

Note: I realize that my headphone amp and soundcard are limiting components, but I think in the end they are sufficient enough at their jobs to present a clear enough picture of the sound for comparison purposes. The Grado HP1000’s helped in that regard. As usual, this test was done as objectively as possible, but is still ultimately subjective because no one here shares my ears.

I will continue to compare both in the coming days/weeks and will report back if there was a drastic change in opinion.
You must log in or register to reply here.