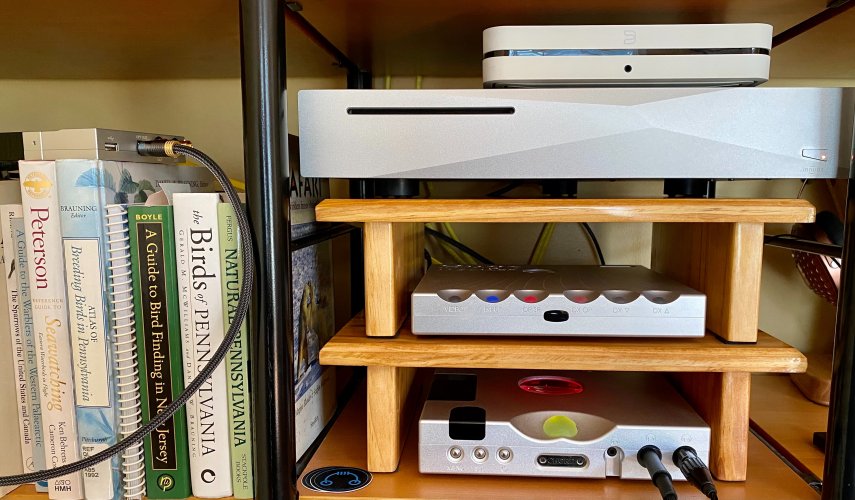 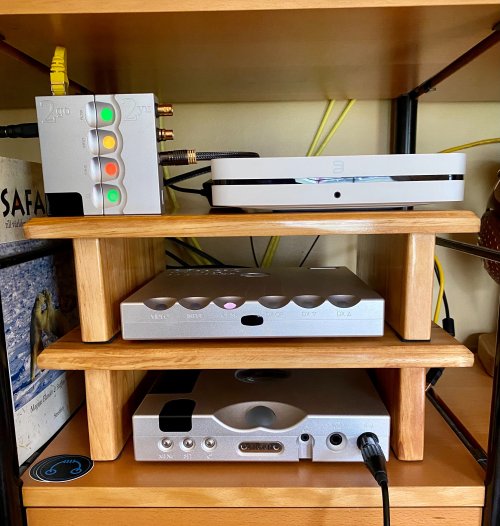 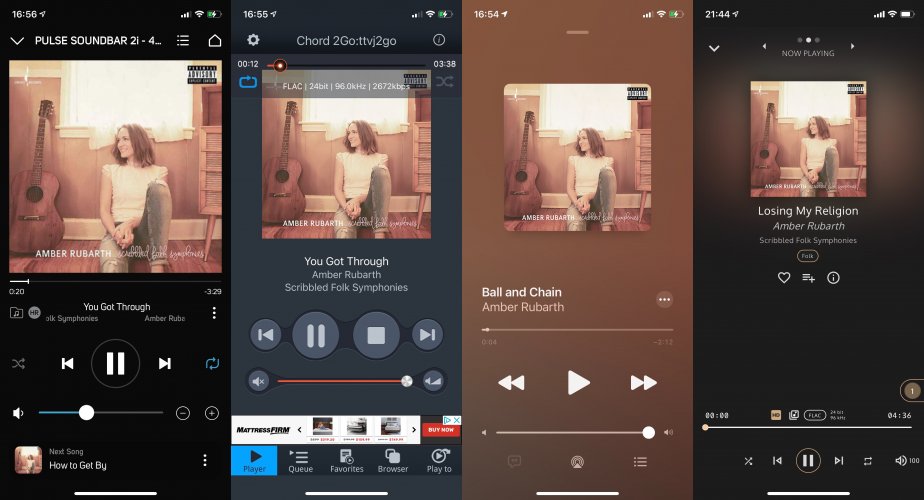 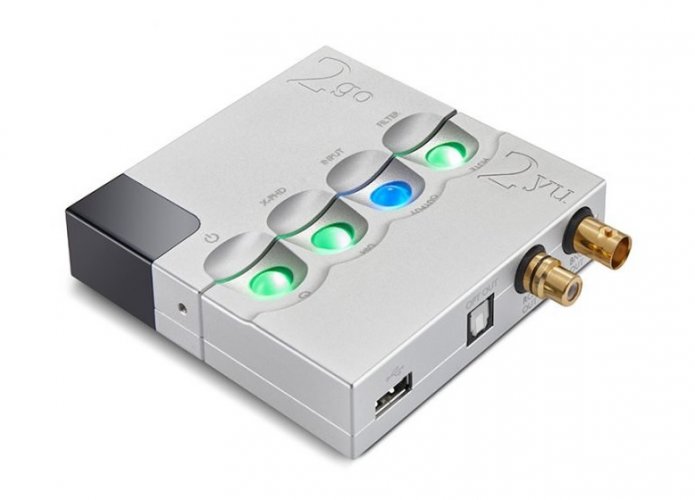 You are using an out of date browser. It may not display this or other websites correctly.
You should upgrade or use an alternative browser.
Chord 2yu and 2go combo loaner program!

We are offering the Chord 2yu and 2go for a loaner program, We have both items in stock and ready to ship too!!!

The loaner will ship out next week. We are still in the process of break-in and evaluating it. So far so good. 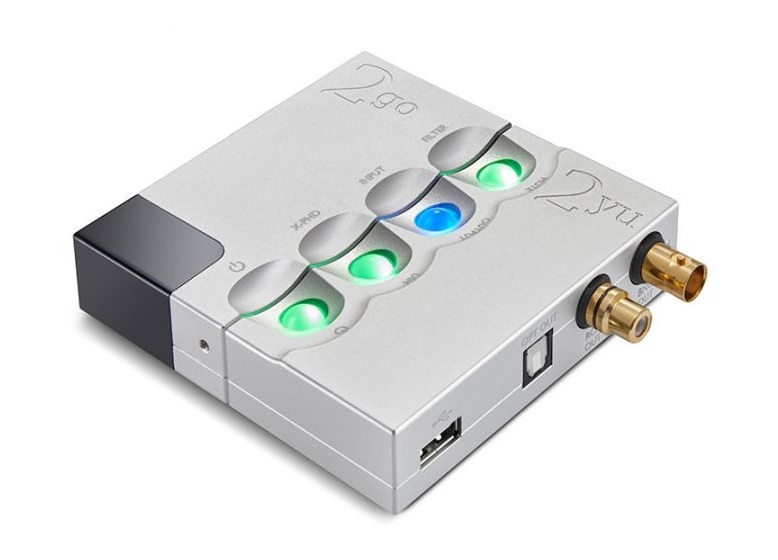 I look forward to hearing from people interested in owning this awesome combo!

The Chord 2go and 2yu are on their way to the first recipient. Have fun. Please make sure to write your reviews in this thread and keep the units moving in a timely manner. Thanks!

These are my thoughts on three streamers across nine days. The format is day by day thoughts so you can see how I vacillate and learn along the way.

Everything was tested on a Chord TT2 / mscaler stack and using Focal Stellia and Sennheiser HD800S.
As I’ve at times gotten annoyed by the following things, I’m on the lookout for similar issues with these streamers:

Oh happy days. The 2Go/2Yu package arrived at my house.

After unpacking my first impressions are:

The plan is to compare my Node2i over TOSlink using FLAC files on my NAS to the 2Go/2Yu over USB using the builtin SDcard reader.

The plan is to try both devices over TOSlink. The 2yu is still louder.

I expect to pick up an Innuos Zen 3 today.

I want to try the 2yu with the SBooster to see if it relaxes the sound. Could the power supply be the reason for the volume difference? It’s all digital though…!?

I switch from Stellia to HD800S. Nothing new comes up.

I cannot figure out how to turn off the 2Go/2Yu. Pressing the on/off button does nothing. It’s not playing any sound that might be expected to prevent shutting down. I end up leaving it on.

Switching back to Stellia again. A soundscape recording by Krister Mild reveals more background sounds than I’ve picked up before. The distant cows are very audible with the 2yu.

The Innuos arrives. The setup of the Zen mk3 is much simpler than the 2Go/2yu. I’m guided at each step. But it’s weird to use squeezebox for Tidal integration. Indexing a NAS drive takes time but it’s easy to find the network drive and start the process. The Innuos box is enormous and hard to fit in my shelves.

I experienced an iOS app bug: I lost connection to the Zen3 server and cannot stop the music and wrong track information is shown.

I didn’t compare to the 2yu. Instead I immediately realized that I heard more spatial information and had to experience more of my recordings over the Zen. I spend the night just listening to the Zen3.

After yesterday, I expected this comparison to be over with the Zen3 the clear winner. Not so. Today, I set up a comparison with 2yu on the SBooster vs the Zen 3. I’m using the remote control on the mscaler so I can quickly switch between the USB and TOSlink inputs. Other than the mscaler needing a second to switch signal, the comparison was pretty instant. Both players are playing the same albums from each their local storages.

2yu: Sound is a hint brighter.

Zen3: Sound has a hint less treble energy and more “reach out and touch” 3D sense.

Both have the same loudness which makes for an easier comparison. The Zen3 is more resolving. What sounds like background noise on the 2Yu is wind in pine needles on the Zen3. 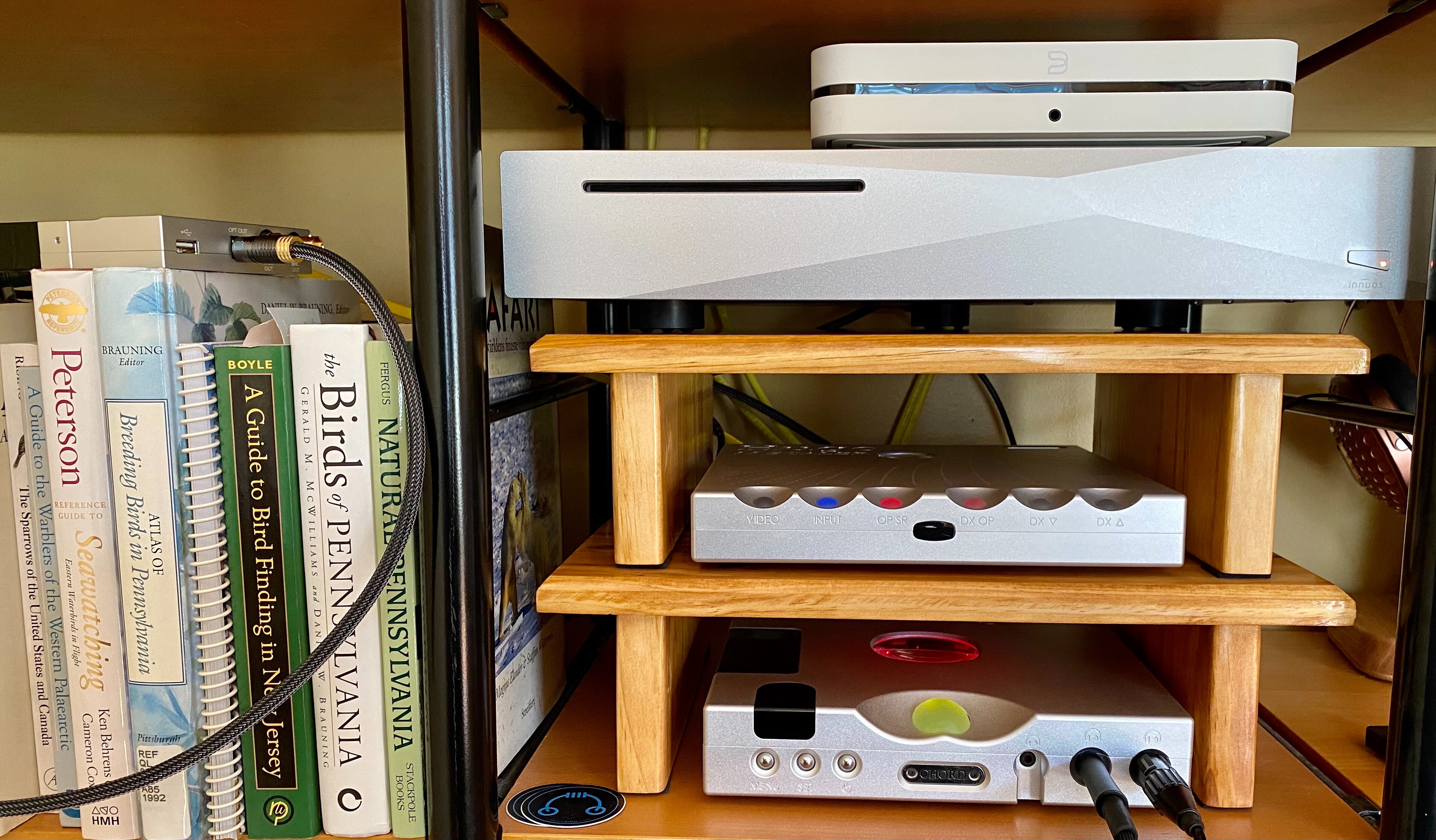 In a blind test, I’d probably fail to differentiate these.

Zen3: It has no AirPlay! The iOS app needs to be restarted as it forgets the server after switching apps on my iPhone. I learn that a fix is expected August 16.

Thoughts: The differences between Chord and Innuos and Bluesound are small enough that I’d happily live with any of them. I trust the Innuos team to deliver software improvements. Chord’s strategy of third party apps deviates from where I’d prefer to go.

I remember that I had turned off up-sampling in the thought that it would minimize switching time as I jumped between all three streamers. That was incorrect. With full up-sampling, switching times are minimized and the differences between the streamers are easier to discern. The Zen3 pulls ahead. The Node2i outputs a quieter TOSlink signal which forces me to change the TT2 volume several steps at each switch.

Updated thoughts. The Zen3 is clearly the best sound source. I wonder how the Zenith3 compares. Why is the Zen3 better? I hear the Zen3 best the Chord in that wind and mosquito wings are clearly that on the Zen3 while the Chord turns it into hiss. The soundstage is also smaller with the Chord. The Node2i is further behind with fuzzier and fuller sound. It is now hard to switch from the Zen3.

Today, I aimed to compare playback of local, NAS, and streamed files. I could not tell much of a difference.

The main learning is that M-connect ran down my phone battery over night. If I know/remember, I can force shutdown the app but it is yet another wart on the 2Yu option.

The Zen 3 went back to the store. No AirPlay is a showstopper. My dealer says he’s been asking for AirPlay support on behalf of other customers already.

None of the devices can better the Node2i after considering basic functionality (AirPlay, usability of app, battery drainage, cable entry into device). I’ll keep my Node2i and keep looking for alternatives.

If these streamers were work colleagues: 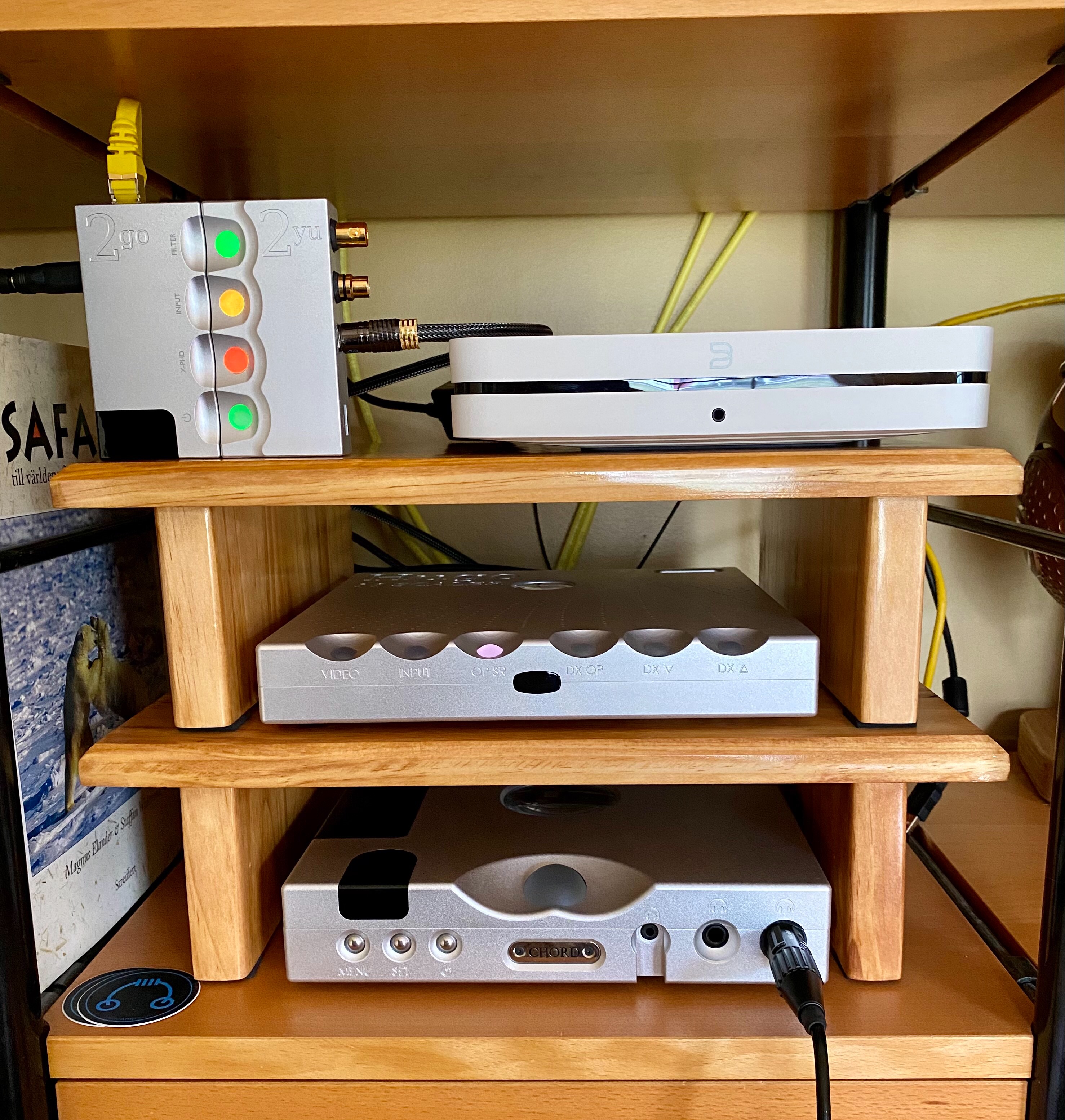 This probably doesn’t read like a glowing review of the 2Yu. But I really do like it. Just not enough to pay for it. Had my use case called for a Hugo2, my decision would have been different.

For my next test I compare 2Yu’s USB and TOSlink.

It takes several seconds to switch between the outputs since I have to switch both the 2Yu output and m-scaler input. Hence, it’s hard to compare.

With that hedging, I do think USB sounds better: deeper soundstage and more relaxed.

Comparing 2Yu via USB to Node2i via TOSlink comes out in Chord’s advantage. USB is louder by five clicks on the TT2 so I have to adjust as I switch. Still, soundstage is deeper and faint sounds in the distance come through better.

Using the 2Yu, streaming Tidal via Ethernet and USB out, I notice no scraping noises between songs today. I think I heard this before due to the m-scaler being in “no upscaling” mode. There’s a short hesitation between songs though.

Trying to scrub forward in a Tidal song in m-connect fails. Moving the cursor forward seems to succeed for a second but then returns to where it was. Playback continues as if I had done nothing. Stopping and trying a different track makes scrubbing work. Weird. Enabling both kinds of gapless support in m-connect seems to remove even the hesitation.

Switching to AirPlay. A win for the Chord. It only has AirPlay rather than AirPlay2. This allows Bandcamp, that only supports the original AirPlay to work.

Again I experience scratches in the middle of songs using the Chord stack. Short burst of static in left channel.

Finally, turned off the Chord combo. I had to press the on/off button much longer than expected. I assume this is a safe guard for mobile use.

Comparing the “now playing” screens across : Bluesound, M-connect, Apple Music, and Innuos Sense. The controls of the Innuos app are too small. 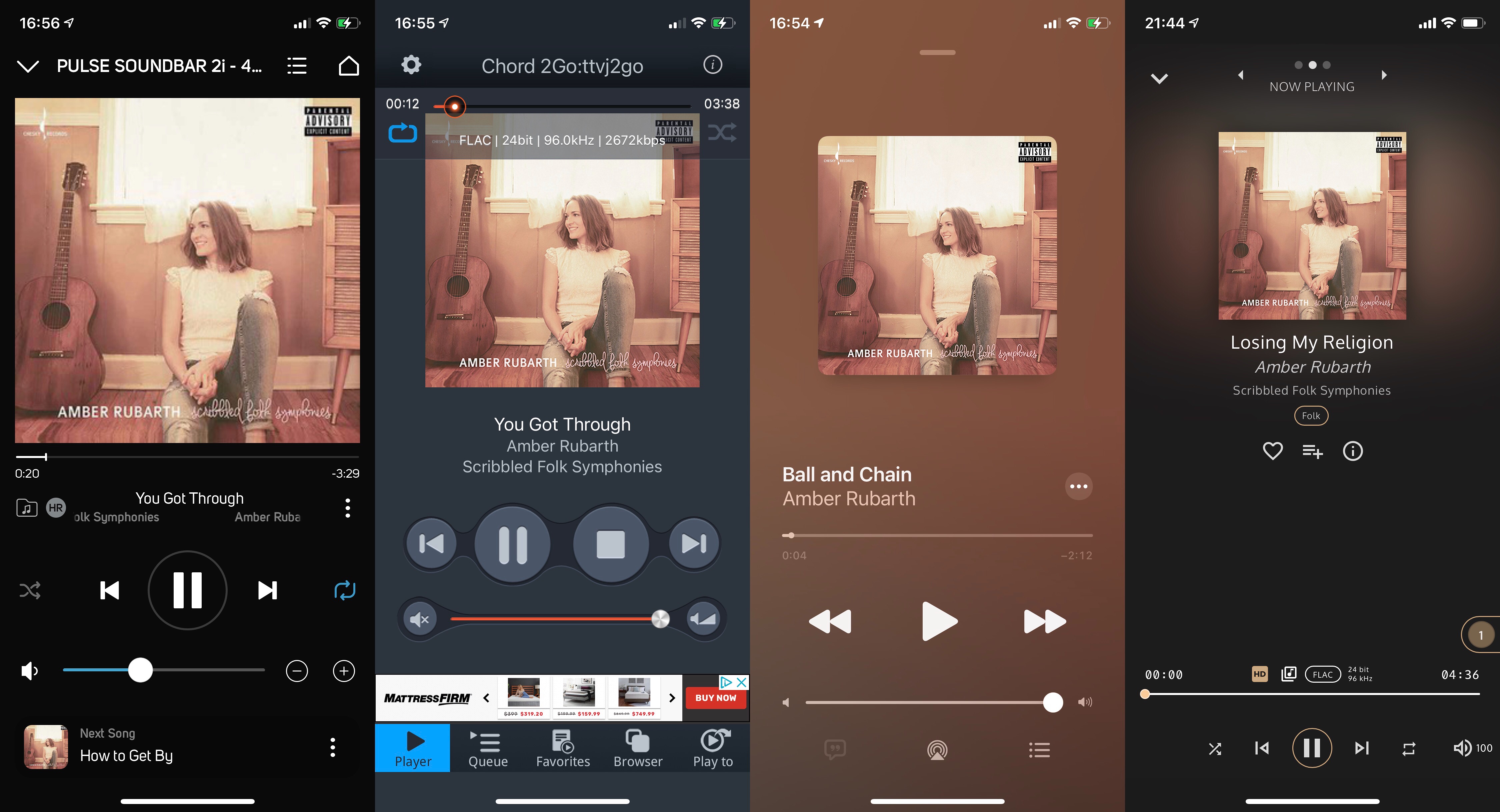 After experiencing these streamers, my desired streamer should have:
Sound quality—

No specific ideas to test. Tired from work. But just trying to start the 2Yu takes several minutes. Holding the on/off button does nothing. Pull power cord and reinsert. Still nothing. Take a deep breath and hold button for ten seconds. Finally it wakes up.

Packed up the Chord gear.

Removed the switching power supply for the 2Yu and tossed in an extra iFi AC ipurifier in between the mscaler and TT2. It feels great to be back on the Node2i. Familiar controls, no clutter, sound is good. The only device I feel a nawing sensation of loss over is the Zen3. But its functionality is too limited at this point.

Thanks to Todd the Vinyl Junkie for the opportunity to experience this snazzy device. You have given me a good reason to call you the next time I need any audio gear.
Last edited: Aug 13, 2021
Bluesound Node 2i > Chord M-Scaler > Chord TT2 > Focal Stellia + Sennheiser HD800S

I keep my thoughts in the microwave. They’re a little overheated but at least they’re safe. Marc Ickx