Loading…
RAAL-requisite SR-1b + TI-1b my new reference for resolution and soundstage
Pros: Ultimate Resolution
Mind blowing soundstaging and imaging
Very natural sounding
Can now be driven with every headphone amplifier (coupled with TI-1b adapter)
Cons: Depending on the recording, it could still use more bass (without EQ!)
The company RAAL requisite has been developing headphones with ribbon drivers for several years. The SR-1b is the new flagship model from RAAL requisite. This was only slightly adapted compared to the predecessor SR-1a. Besides a different looking grill and an internal silver wiring nothing has changed, as David Lauterbach from RAAL confirmed to me. Both sound absolutely identical. 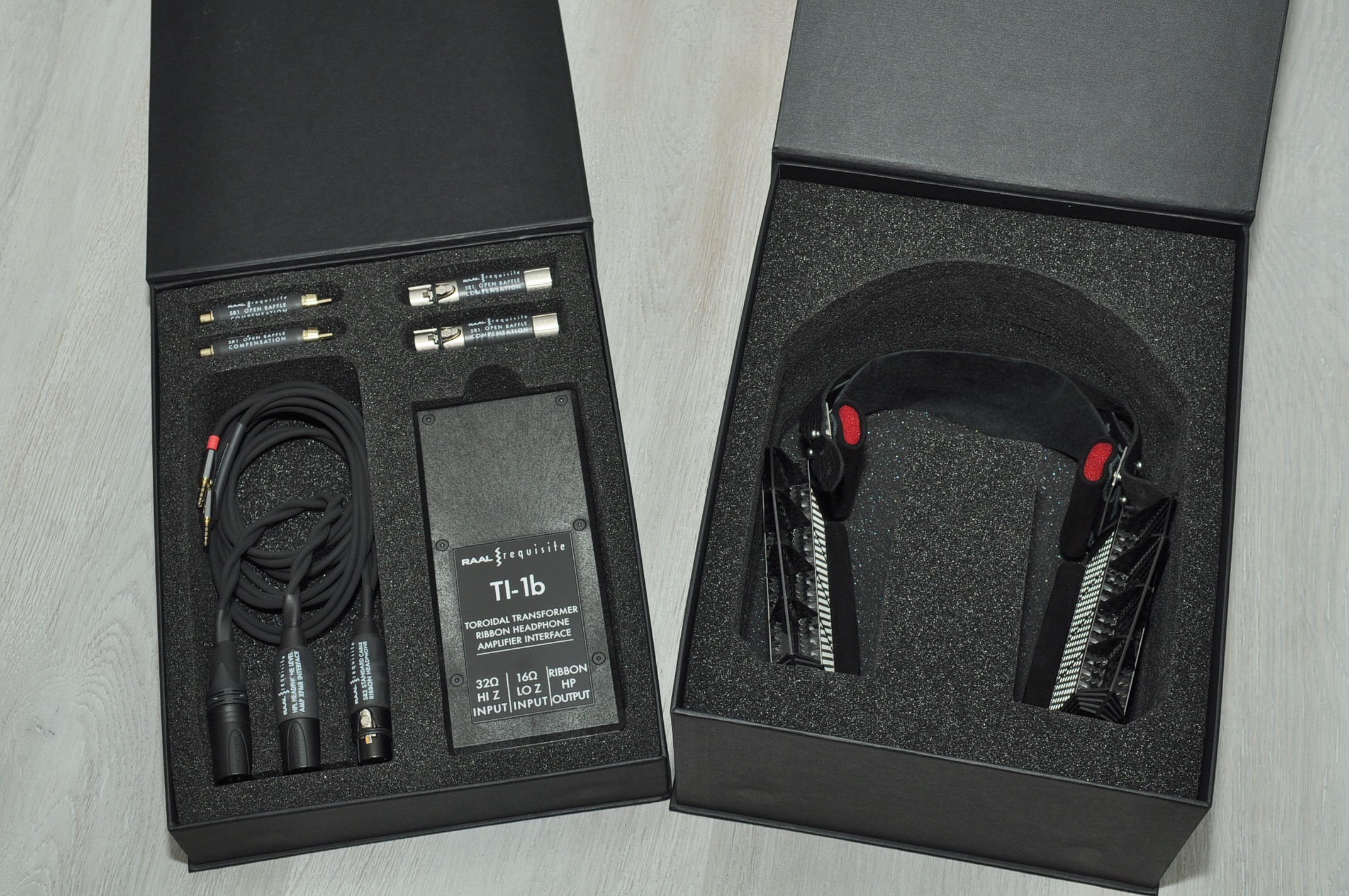 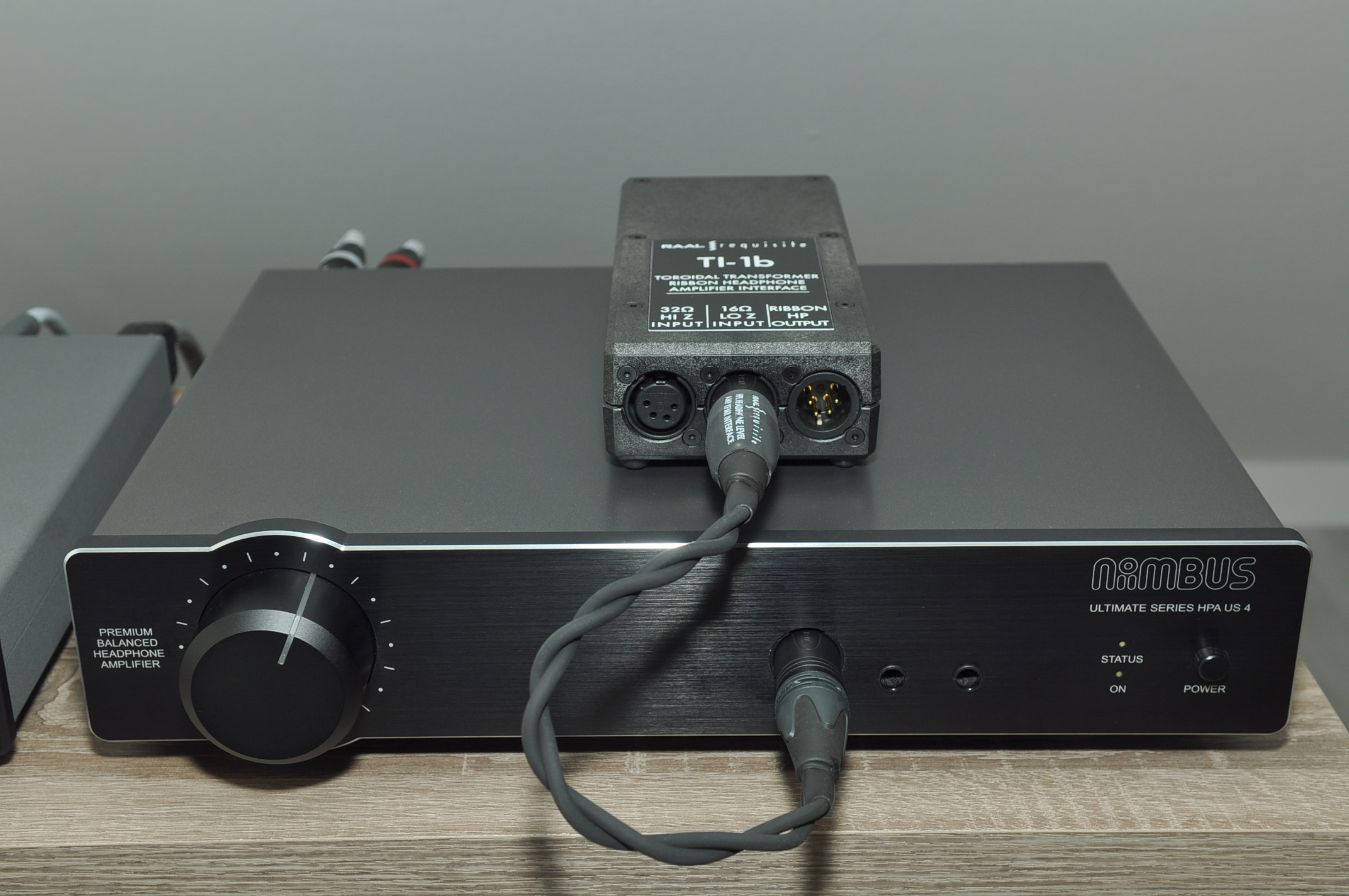 Ribbon drivers are an absolute rarity in the headphone field. However, the RAAL company has brought this to the sonic pinnacle in recent years, and what exactly is special about the sound of ribbons, I would like to describe below.

When the SR-1a was launched a few years ago, the only way to drive it was through speaker amplifiers. By means of a small adapter interface, which was coupled to the speaker amplifier, one could connect the SR-1a. Which of course meant that you had to buy a separate amplifier, which also had quite a bit of power (>=100W) left over to adequately drive the SR-1a. Later came a smaller amplifier solution in cooperation with the manufacturer Schiit (Jotunheim R) as well as a proprietary amplifier in the form of the HSA-1b, which RAAL developed specifically to drive the SR-1a/b, with the goal of ultimate drive. But each of these solutions ends up requiring an amplifier, which must be purchased separately.

Every headphone enthusiast usually already has a very good headphone amplifier at home. So what could be more obvious than to use it to drive a RAAL headphone? RAAL thought so too and so they developed the TI-1a interface box and later the TI-1b interface box (more compact dimensions and all connections on the front, which also makes sense), which I also use to drive the RAAL SR-1b. With this interface box it is possible to drive the SR-1a/b with an ordinary headphone amplifier. What exactly does this wonder box do? Without diving into the technical details, it is based on transformers that convert a signal with high voltage and low current into a signal with low voltage and high current. So the interface box is connected to the 4 pin XLR output of the headphone amplifier. You have the choice of using a 16 Ohm or 32 Ohm input to the interface box. It is recommended to use a headphone amplifier that is capable of delivering approx. 2W at 32 ohms. The supplied cable SC2 in the length of about 2m is specially designed to meet the requirements for operation with the TI-1b and has a low inductance and a certain resistance per unit length. I use the SR-1b in conjunction with the Niimbus US4, which delivers 5.6W into 32 ohms. So power to spare and a control range that I barely left above 12 o'clock on the Niimbus. With amplifiers that deliver over 6W at 32 ohms you should also rather use the 32 ohm input on the TI-1b, otherwise it can become too much power. By the way, the TI-1a/b was developed together with the new circum-aural ribbon headphones CA-1a, which I will certainly test at a later time. 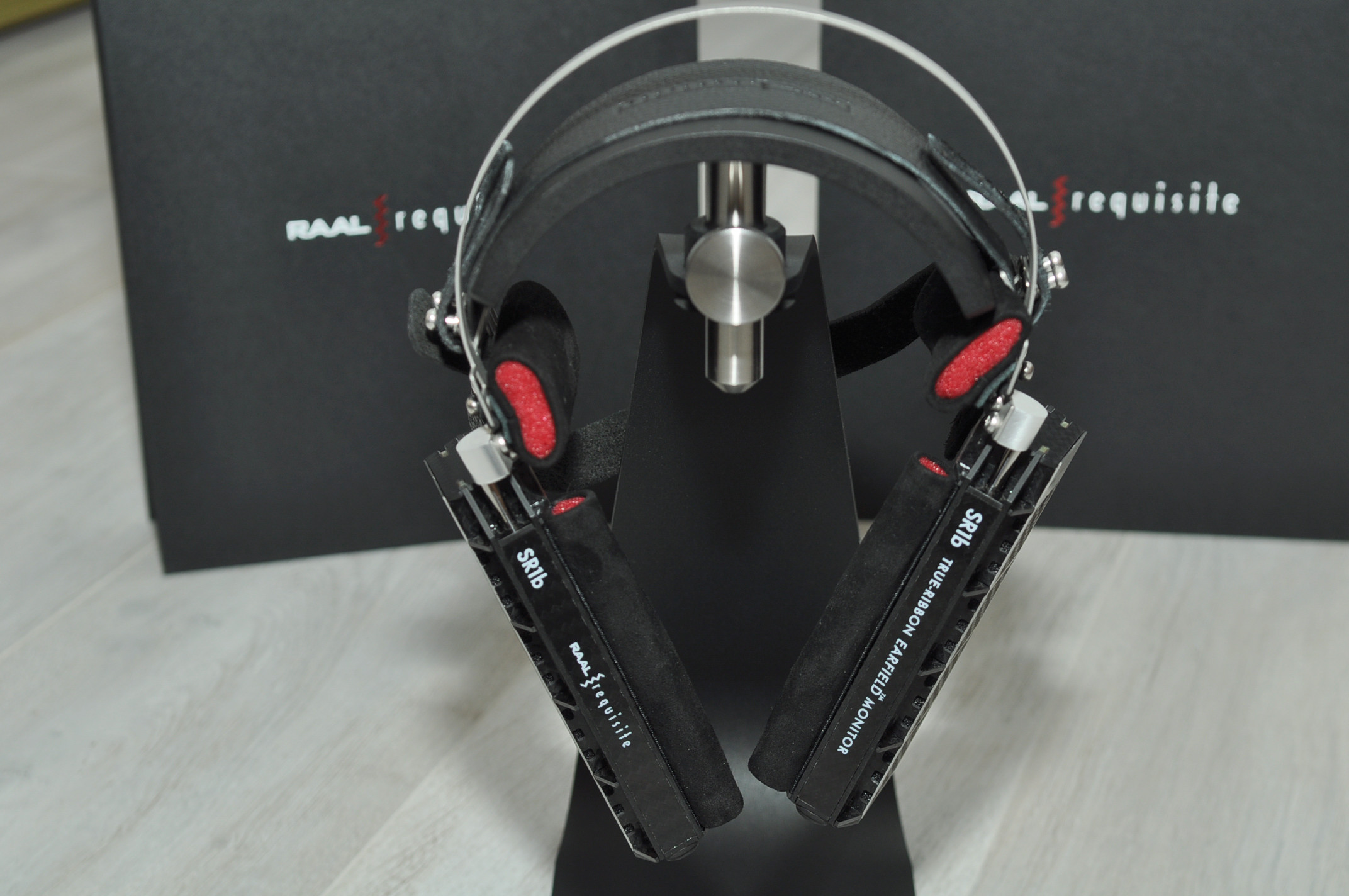 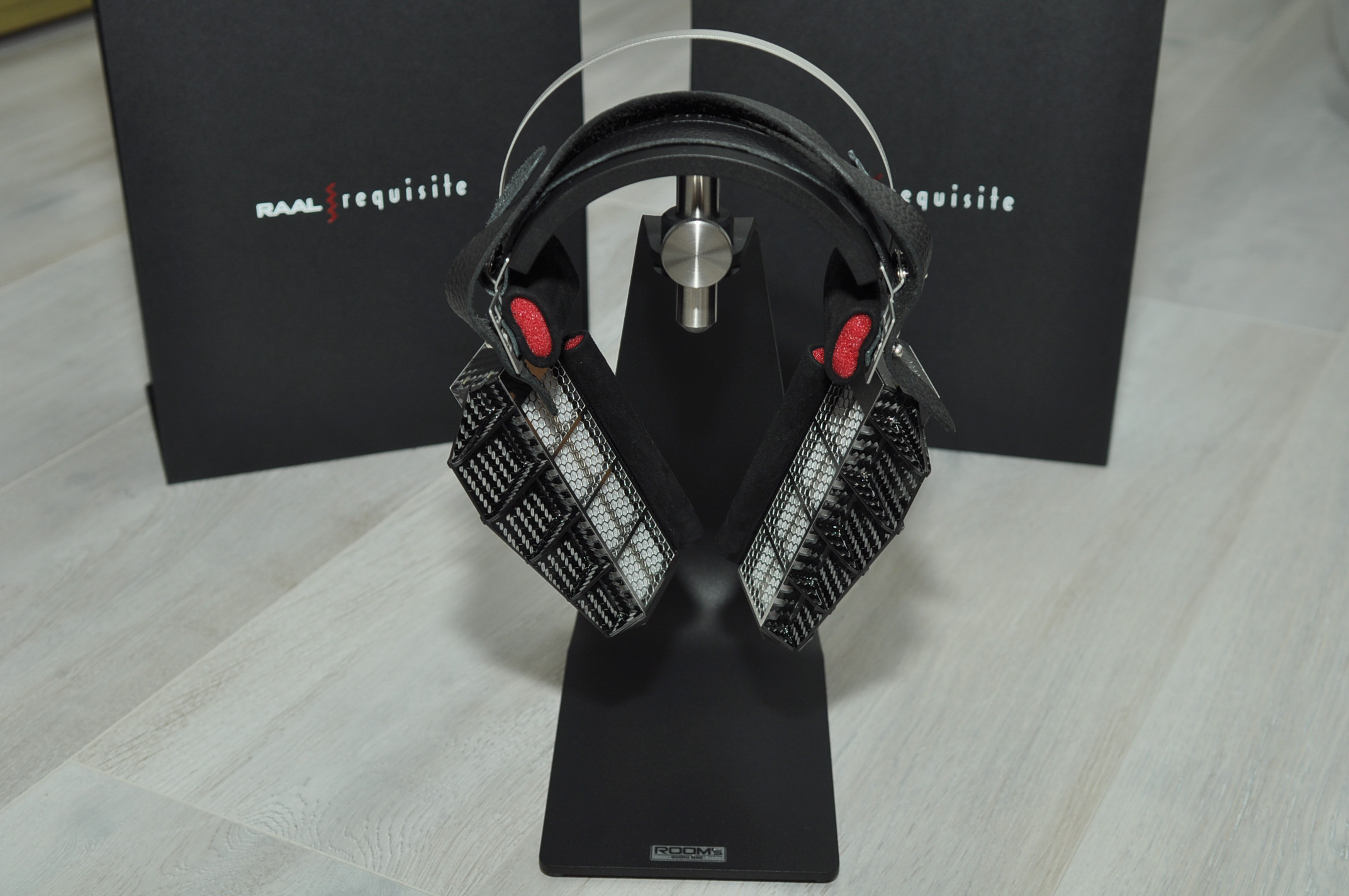 If you look in the packaging of the TI-1b, you will find 2 XLR connectors and 2 RCA connectors. What do you need them for? Well to drive the SR-1a/b a so called "open baffle compensation" is necessary. Because of the completely open construction some frequency ranges have to be adjusted. This is exactly what these plugs do, which are plugged into the input of the headphone amplifier before the source. They operate as an equalizer, so to speak. If you use an equalizer anyway, you don't need these plugs and can set the following parameters in your PEQ (source: https://www.head-fi.org/threads/raal-ribbon-headphones-srh1a.890603/page-377#post-17046043):

Before I come to the sound a few sentences to the design and comfort. The SR-1b is very well manufactured and also looks valuable. The construction is chosen in such a way that you can really change every foam pad and even the ribbon drivers very easily. And the whole thing still at very human prices. I know that from some manufacturers also different. That you can even as a layman just replace the drivers I find great! And 450 USD for 2 drivers I still find completely okay, considering the purchase price of the SR-1b.

When I first held the SR-1b in my hand, I was a little worried about the comfort on the head. I must say, however, in retrospect, once you have adjusted the SR-1b correctly and take some time for it, you get in return a comfort where you can wear the headphones without problems for a long time. The weight distribution just needs to be adjusted correctly first. A first starting point for the adjustment is this Youtube video:

The SR-1b has two headbands. A usual headband, as you know it from other headphones and a band which is stretched around the back of the head. Both leather straps can be easily adjusted like a belt. Once you have adjusted the height and the head circumference, it goes on to the angle of the two ear cups to each other. Since I have a slightly larger head, I have both shells on the metal suspension bent slightly outward so that they point almost parallel to each other when I let the headphones hang in the air with one hand. The final stage of adjustment is the opening angle. You can open the shells outward and close them again. For best sound and comfort, I recommend a level that just barely touches the ear, but only so that it doesn't become uncomfortable, of course. 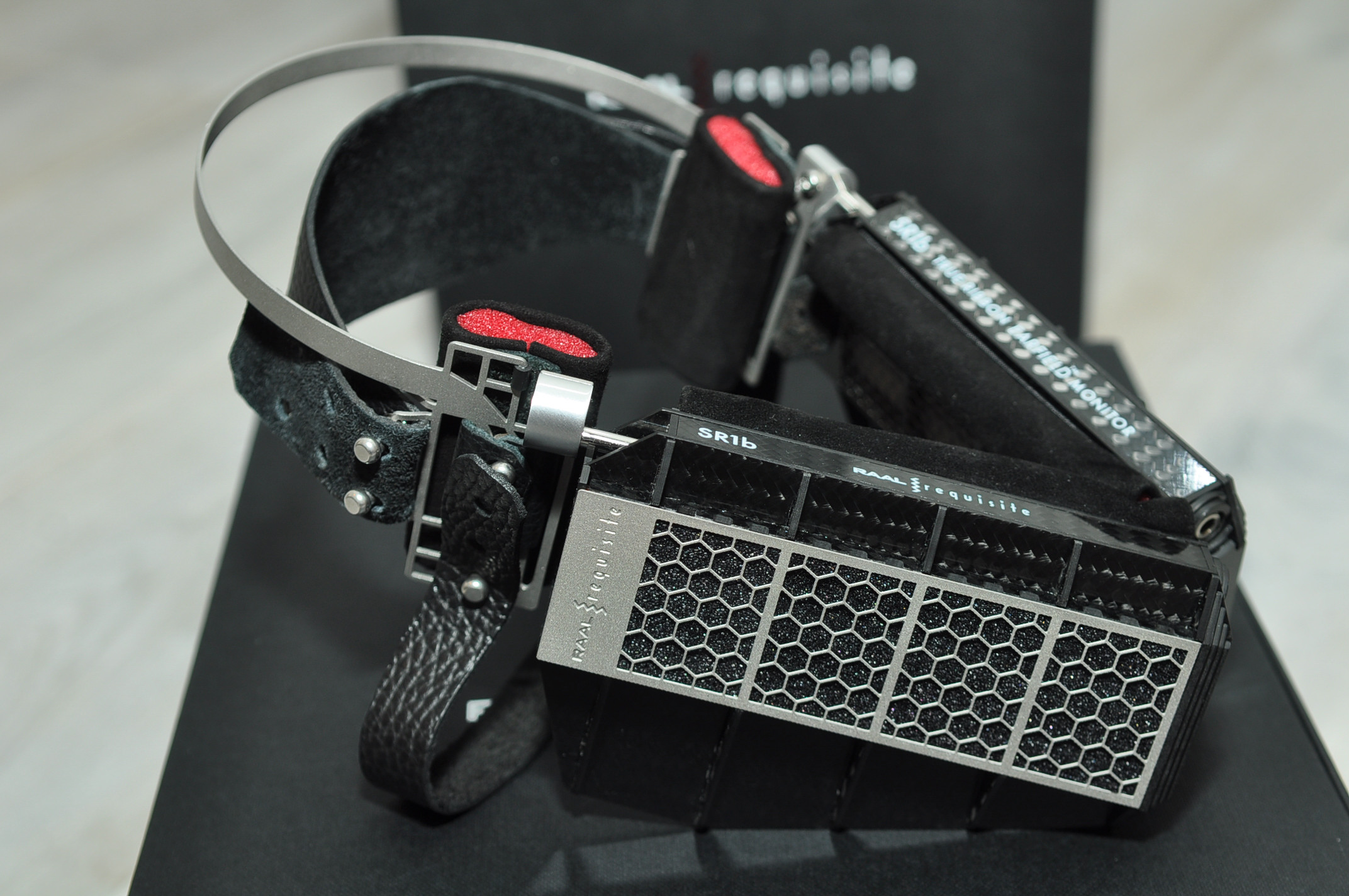 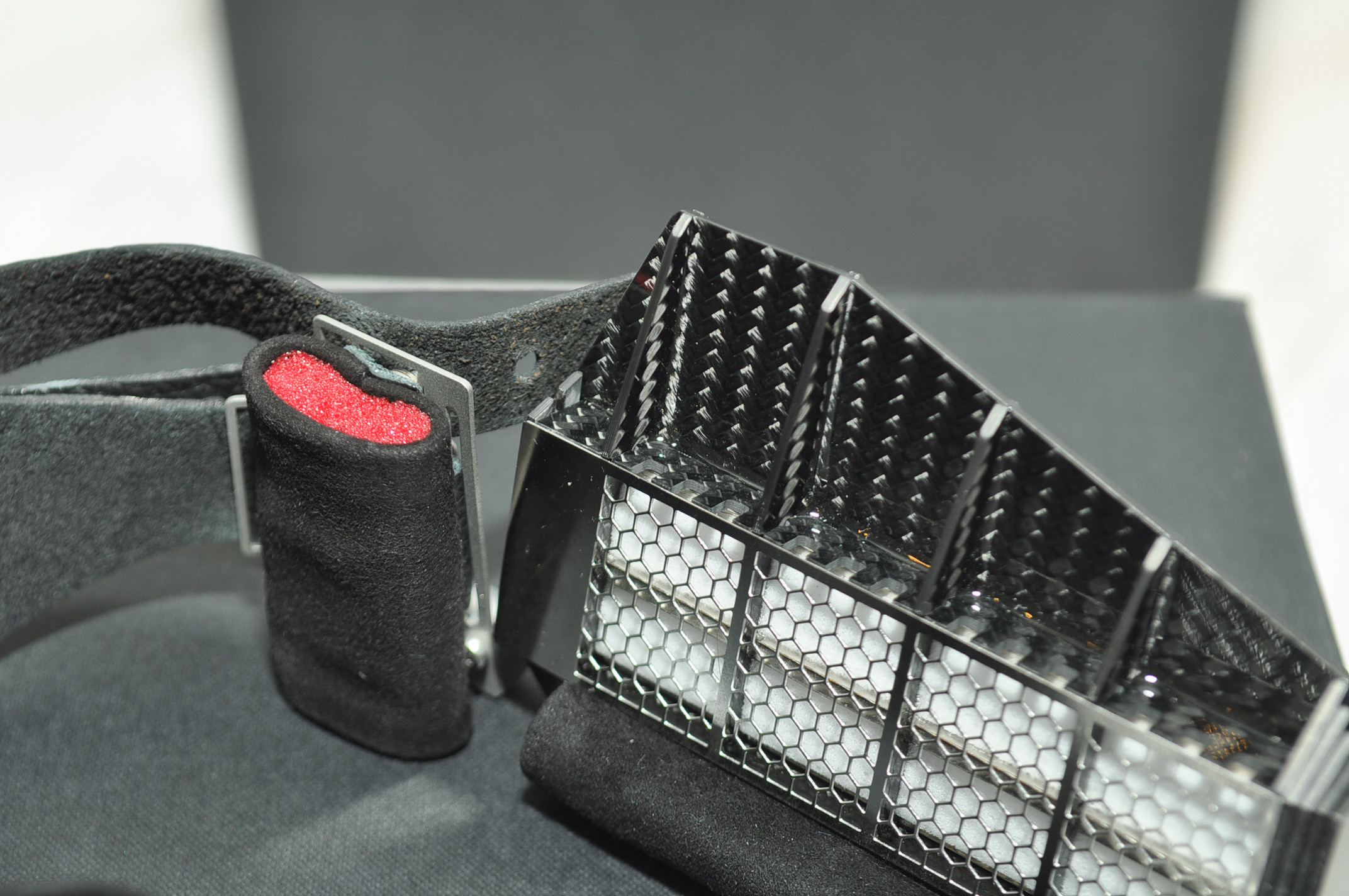 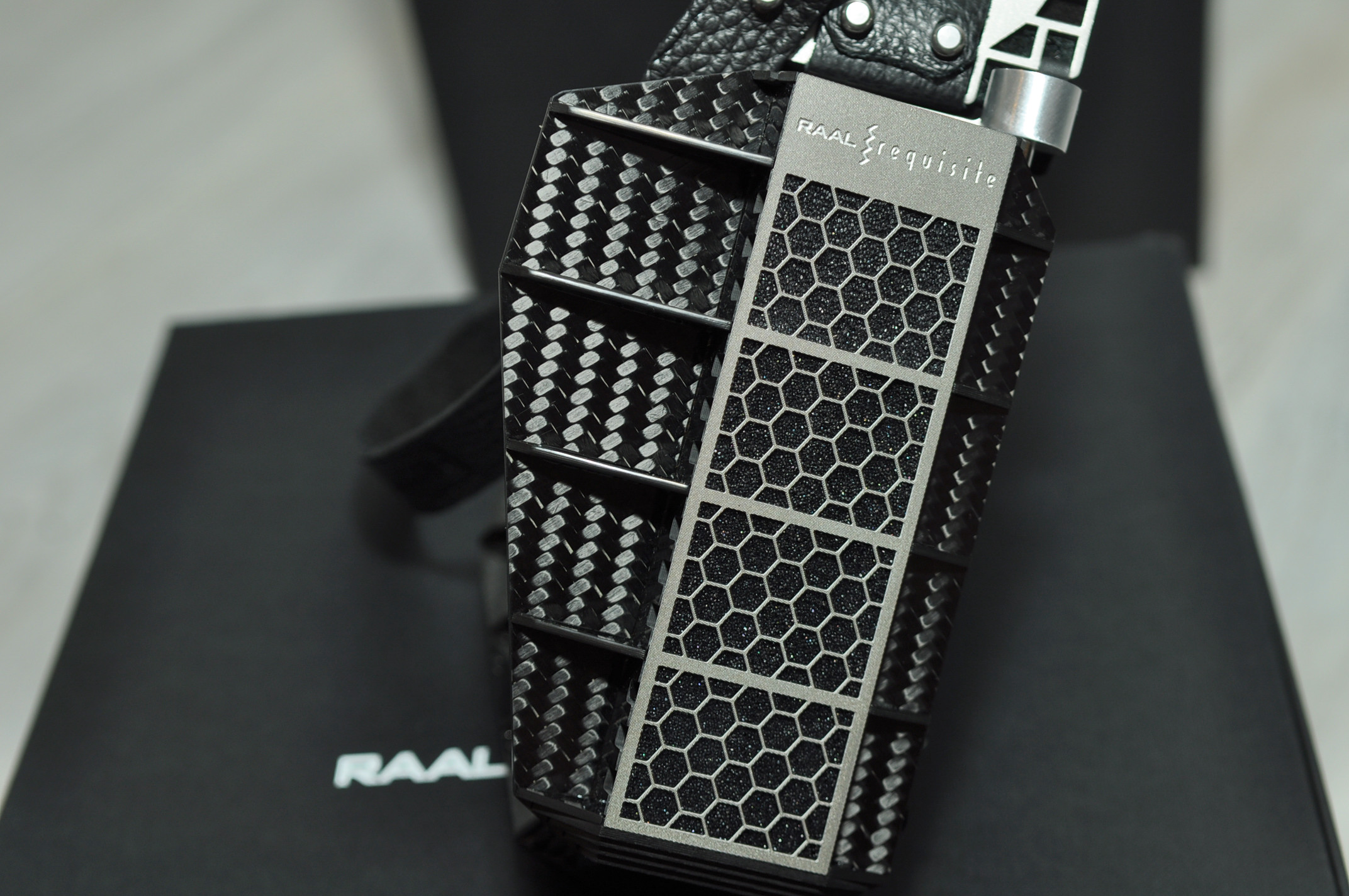 How does it sound? When you put on the SR-1b for the first time, it becomes clear in a flash what the fascination of ribbon drivers is all about. You get an incredibly clean and clear picture of the sound, which at first reminds you of electrostatic headphones. The resolution, however, takes it to the next level. It is unbelievable what details this SR-1b can tease out of a recording. Transparent, naturalness are terms that instinctively pop into my head. Everything is rendered so effortlessly, slag-free. Is Ribbon by any chance another term for speed? I have rarely experienced such a brilliant transient reproduction, maybe never. You'd have to pull out an SR-009 to achieve anything similar. That would be you the most outstanding attributes of the SR-1b: resolution, speed.

Wait, I forgot something important! How is the stage imaging actually? This is a headphone titled as Earspeaker, which is designed completely open to all sides. So it's like having two small speakers that you literally hang over your head. Now comes the third superlative, the stage! In terms of stereo width, "normal" headphones can't keep up. This is a wide image, which is only known from the Mysphere. In addition, the whole thing is paired with an absolutely razor-sharp imaging of the individual sound events. This is in a league of its own, together with the Mysphere!

So far, I haven't even talked about the usual attributes like treble, midrange and bass. I must honestly confess, in the first hours of listening, these did not even cross my mind, so much I focused on the sound events within the stage and the details. The SR-1b is a bright timbrated neutral headphone, an absolute magnifying glass. It immerses the listener in a world of detail. It is a kind of roller coaster ride, where you are always fully concentrated in the sound event. It's different from listening to music with a Hifiman Susvara or Audeze CRBN, for example, which are more restrained, more relaxed. The SR-1b is more comparable to the SR-009, the highs, as ultra-precise as they are never seem too peaky or annoying. Still, I wouldn't use headphones like the SR-009 or SR-1b for hours of listening, they simply require too much concentration from the listener. But more on how to achieve it anyway later.

Voices are reproduced absolutely free of coloration and true. The Raven by Rebecca Pidgeon gives me goose bumps, so well does the SR-1b reproduce the voice. Classical music, like the Beethoven No. 5 concerto by Carlos Kleiber (Deutsche Grammophon) or Cuban sounds like Chan Chan on Buena Vista's Socal Club are parade disciplines for the SR-1b. You can really locate every single instrument, every sound, concentrate on it completely, while the next second you are concentrating on another instrument again. Is that because of the ribbon drivers or the completely open design? I think it's the combination of both! With my usual reference recordings like Hotel California, pieces by Lynird Skynyrd I can't get out of the amazement, so the first listening sessions with the SR-1b always ended quite late.

Many who know me, know that I am usually in a completely different music genre on the road and namely Prog Rock and Metal. How does the SR-1b do here? First of all, the bass range is absolutely top in terms of quality. Due to its brilliant transient reproduction, it effortlessly reproduces even the fastest metal completely without slagging. However, like an Audeze LCD-5, for example, it is very neutral. As with the LCD-5, I therefore naturally asked myself the question of how well the SR-1b reacts to the use of an equalizer. Can you make this inherently punchy bass even punchier? Yes you can! For metal I recommend to start with a Lowshelf of +4-6dB at 40Hz as well as 80Hz. That makes the drivers with my volumes at least nothing. Who owns the SR-1b, should really play once with the equalizer. A good starting point for this are the settings of Amir from the ASR forum: https://www.audiosciencereview.com/...requisite-sr1a-ribbon-headphone-review.16355/

By lowering the midrange and treble, you get a completely fatigue-free earspeaker that you can enjoy for hours at a stretch without any loss, be it in terms of spaciousness or resolution. It's all there in terms of detail, but doesn't demand that much from the listener. In the meantime, I listen almost exclusively with the EQ, whose setting I developed from Amir's basic setting. I can only advise everyone to listen to the SR-1b with an equalizer. You can always turn it off afterwards if you don't like it.

After this start in the world of ribbons, which is new to me, I am even more curious to hear how a circumaural ribbon headphone like the CA-1a sounds. Or whether the sound can be improved with an HSA-1b, the ribbon amplifier specially developed by RAAL. Let's see when the opportunity for such a test arises.
Reactions: musicus, barbz127, kejnavarro and 21 others