Conclusion: A lot of the limitations i have mentioned for this IEM are simply due to the fact that it only uses 2BAs. I'm excited to see what Prisma Audio can do with more drivers, because what they have done with 2BAs is already impressive. If you want something with a neutral tuning and don't like or don't need a lot of sub-bass, the Azul is definitely worth considering. I would reccommend this IEM, unless your music requires a lot of sub-bass, or you can't take the upper treble ringyness.
Last edited: Jun 12, 2021
Prisma Audio Azul - Unneutered Neutral
Pros: Undisturbed, highly detailed midrange makes it ideal for vocals and orchestral pieces
Treble extension is great for the price, adding airiness and detail to high pitched instruments
Great macro dynamics (dynamic range) that adds engagement factor
Cons: Treble can be a bit strident
Not for bassheads
From one Australian DIY startup comes its debut iem creating a good first impression. Introducing the Prisma Audio Azul, a 2BA iem that targets a neutral sound.

Unboxing:
The package comes in the form of a compact box, hiding a decent set of accessories. The velvet lined faux-leather carrying case is spacious enough for Azul, and feels nice to the touch. 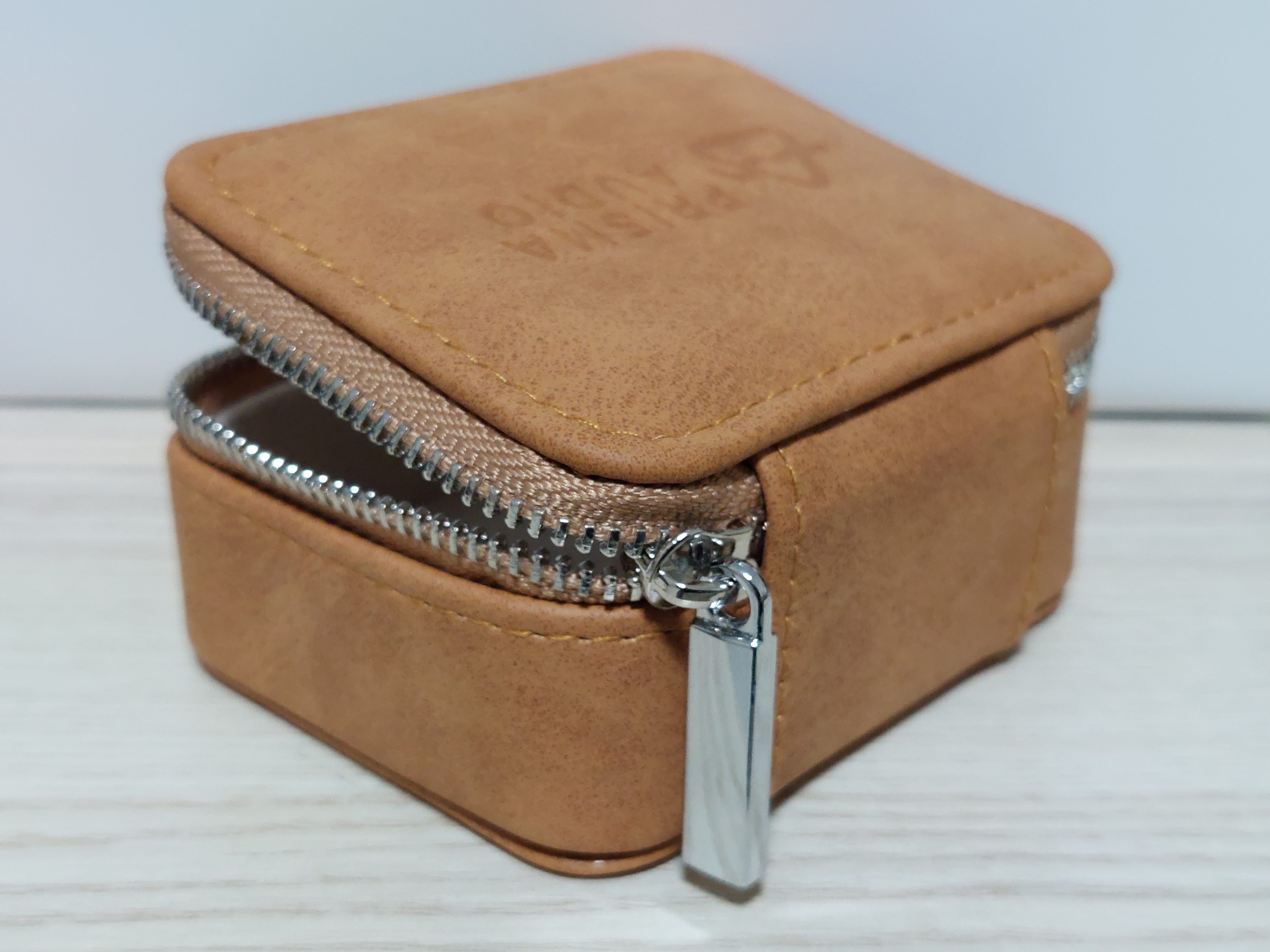 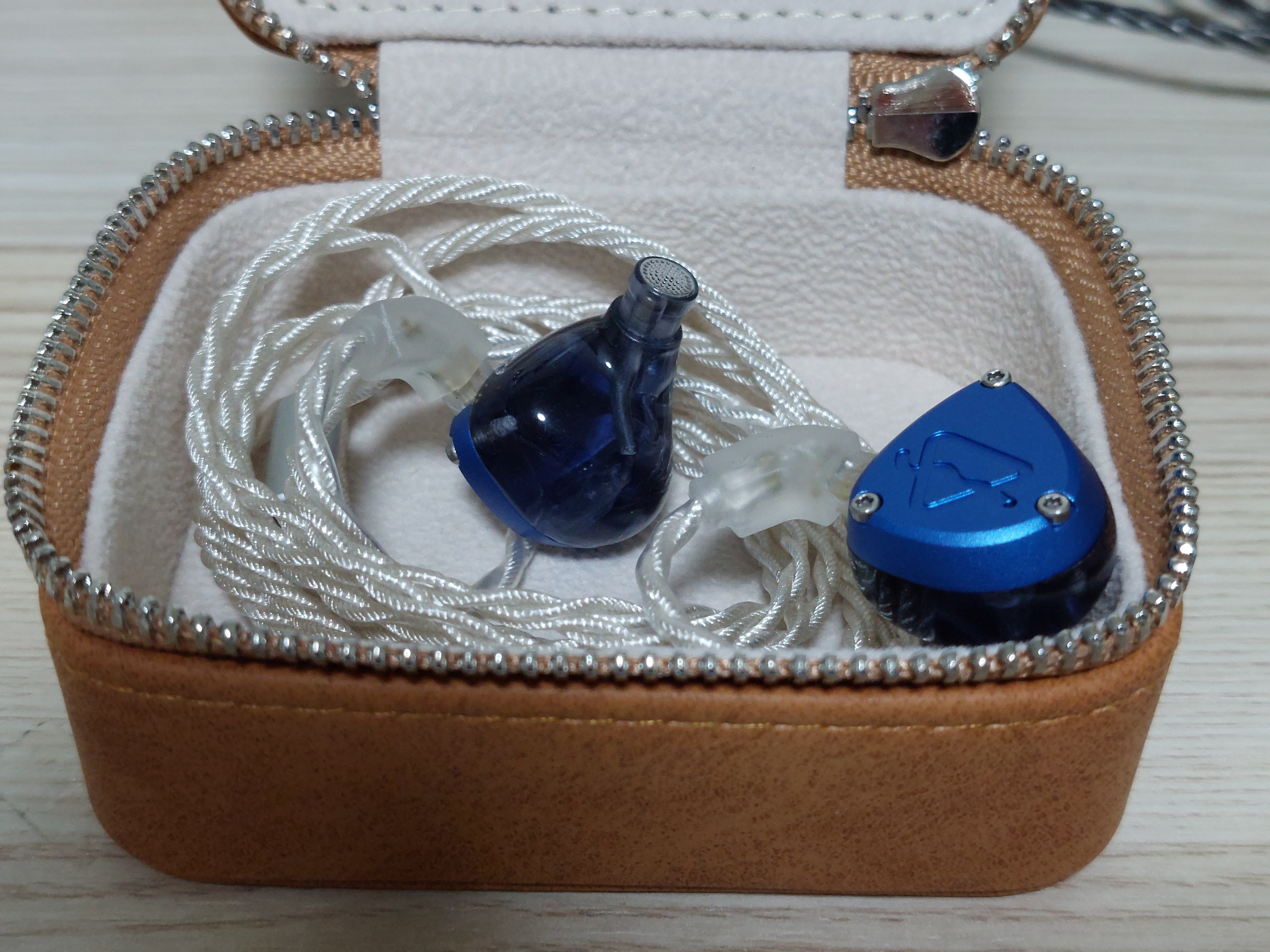 Azla Sedna eartips are well regarded tips for its isolation and minimal alteration to the sound signature. The box generously contains all the sizes from SS to L. The SPC cable is soft and light, with angled 2pin connections that are secured well into the recessed 2pin slots on the iem itself. The angled 2pins help ergonomically by preventing the cable heat shrink from sticking out towards the front. The iem is small enough where you have leeway to twist it for better isolation, fit is perfect for me. 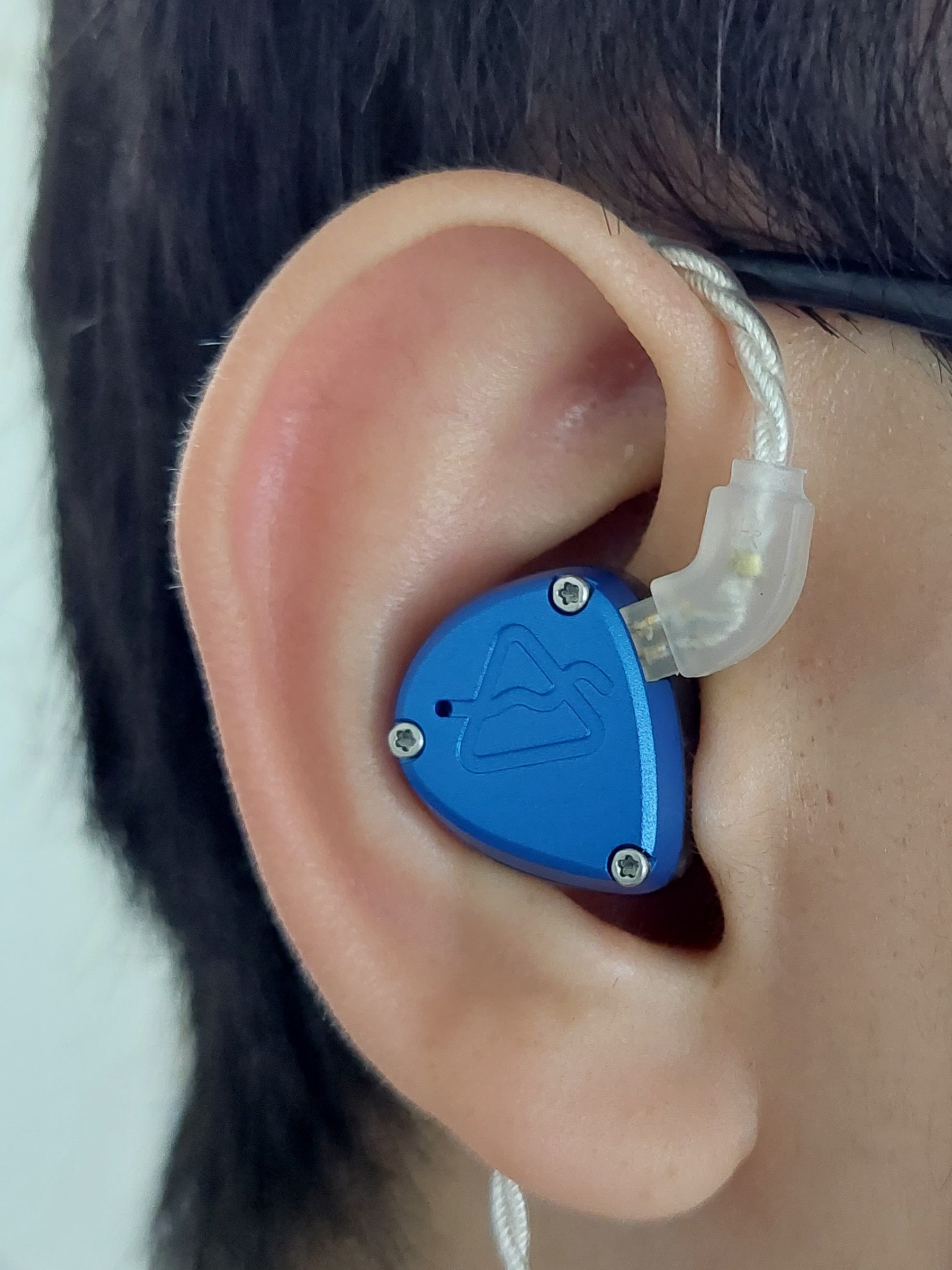 On closer look, Azul is a beautiful bulbous blue thing. 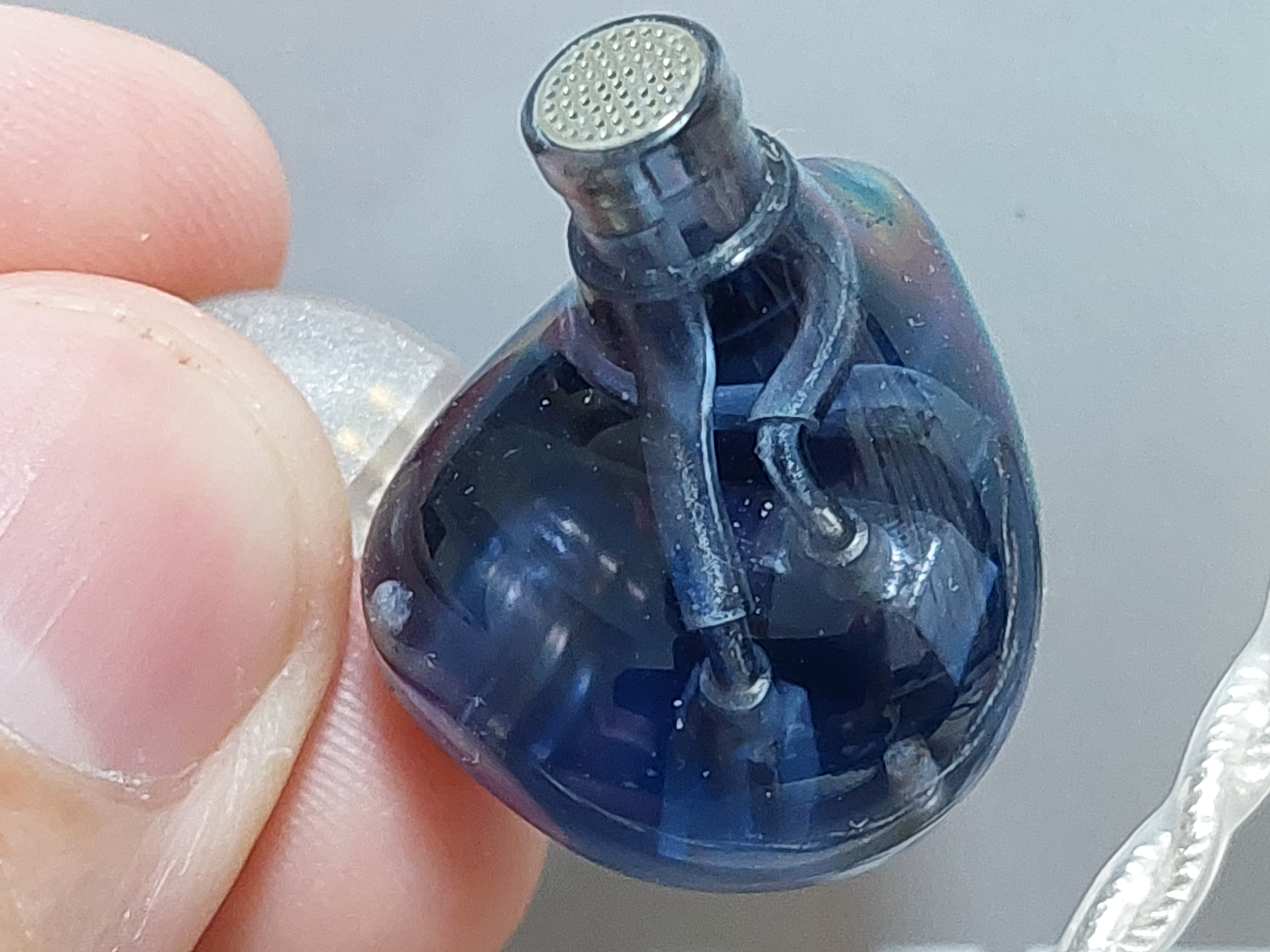 There are also iem pouches to keep the iem extra safe from knocks and scratches. 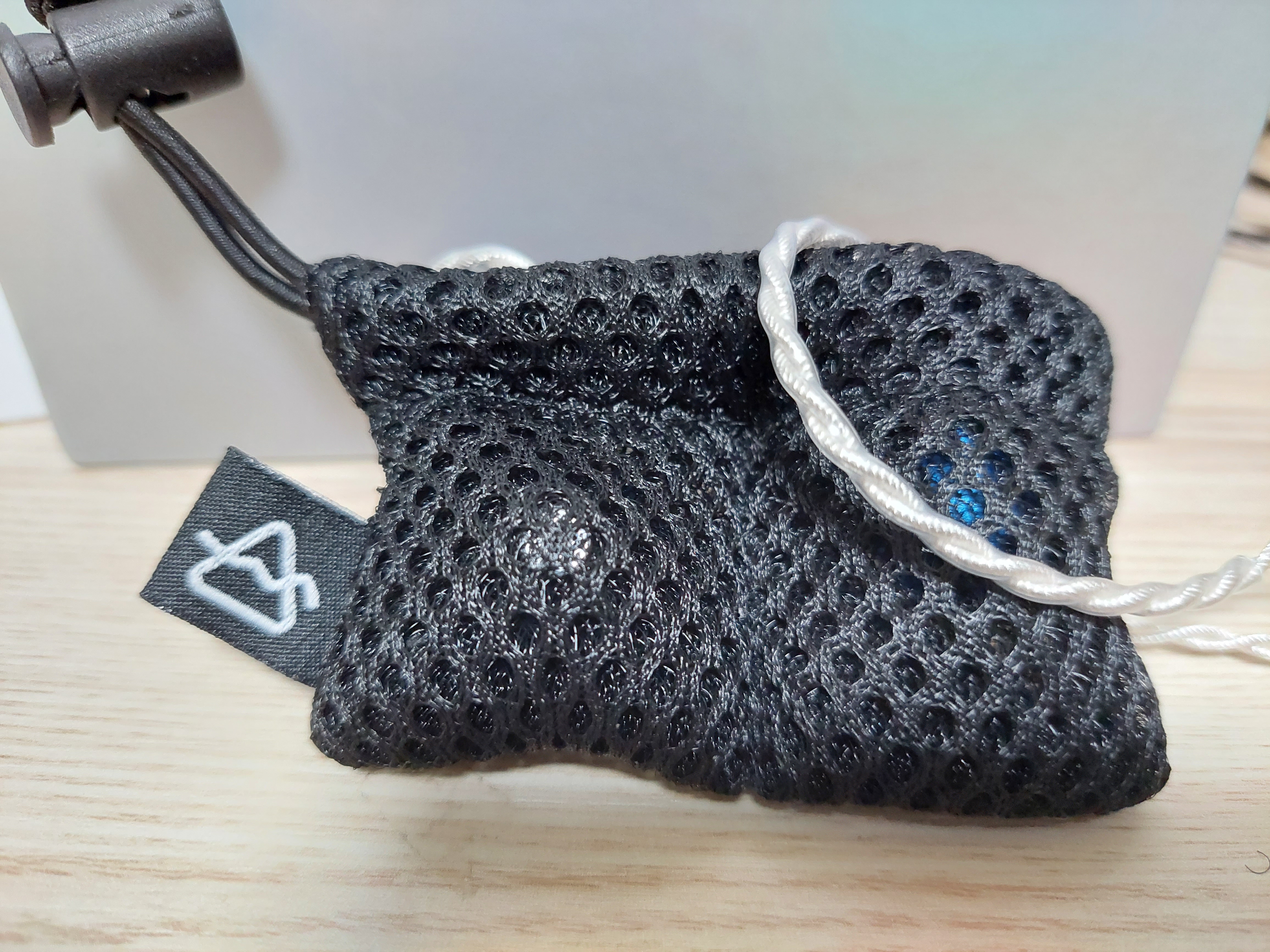 Sound impressions:
Now to the juicy bits. Impressions are done with Ibasso DX160 4.4mm output as source.
Compared to the many iems that call themselves neutral, this iem is pretty spot-on neutral, albeit with a slight tinge of brightness. In the search for my target sound signature which consists of an emphasis on vocals, the Azul seemed to be the next best step in the right direction. Therefore, I was willing to spend my own money on this iem as graphically it seemed to tick all the right boxes.
Measurements (credit to Crinacle.com) seem to indicate a very natural pinna gain that rises at the right time for my preference (around 1khz), peaking at around 2.6khz, followed by non-peaky treble and bonus extension past 10khz. There is also a nice elevation towards the bass region that is likely to add warmth to the overall presentation.

Moving on from graphs, let's see how the Azul fares:

Bass: For a 2BA iem with non-boosted bass, the bass is definitely not a priority. Midbass thuds strike quickly without showing much texture or decay, while subbass rumble shows itself from time to time thanks to respectable bass extension.
This iem isn't for bassheads. Rather, if a neutral sound signature is what you are looking for in a sea of v-shaped iems nowadays, please read on.

Mids: Azul is a mid-forward iem. Mids on Azul is perfectly balanced between male and female vocals. Singers' notes are slightly lean and tight as opposed to grainy/diffused. Notes are somewhat bitey as opposed to smooth. There a slight warmth too thanks to the slightly elevated lower mids.
Compared to diffuse field or harman tunings, Azul is noticeably less shouty so singer's high notes don't have the impression of reaching your forehead/temples. It walks the fine line between shouty and being flat sounding.
One thing which really stands out about the Azul is its dynamic contrast (aka Macrodynamics). Many iems are either upwards compressed (sounds meant to be quiet are still loud) or downwards compressed (sounds meant to be loud are kinda quiet) in the mids, but Azul is quiet in quiet portions and loud in louder portions, as should be the "correct" way to scale the peaks and falls of the music. This prevents Azul from being a boring iem despite its neutral signature.
Microdynamics (fluctuations on a more intimate scale) are decent. The slight breathiness of vocals and vocal inflections can be heard, though not as emphasized as say some QDC iems or warmer iems I am familiar with.
Without much bass elevation, Mids are clean, natural, and take the center stage. Resolution here is superb for the price.

Treble: Azul is a slightly bright, lean sounding iem due to the treble extension. Cymbals strikes and ascensions up the scale with strings are emphasized. There is a decent amount of upper treble so you get some air and spaciousness, which is something even some multi-driver iems with more than 2BA fail to do. This makes the Azul great for orchestral tracks.
The treble extension may make this iem slightly fatiguing for long periods of listening, without a big enough bass/lower mid cushion to balance it out. I find that switching out the default tips to Spinfit CP100 or final audio E tips helped to tame the treble.

Imaging and staging:
Imaging is decent. Instruments mostly stay away from each other though midrange instruments may sometimes take turns to get the center stage. Staging is wide enough to keep the sound outside the head just barely. Cymbals and higher pitched strings stay on the far right and left sides, drums stay slightly behind, the midrange is close up. The mids are very present, though controlled enough to not be in your face like more upper-mid aggresive iems. Therefore, Azul is a solid recommendation for mid-heads who appreciate intimate vocals.

Songs I put it through (apologies for the Korean ballad selection):

Light Soprano Female vocal, R&B - Lyn 'Say' (From album 'Lovefiction'): For a light-voiced singer who moves quickly among the registers from chest voice to falsetto, overly thin sounding iems can sound overly shrill and will take away the emotions from this song. Azul has enough warmth to sustain lower harmonics in the chest voice and enough air to show the full extent of the falsetto.

Deep Mezzo Female vocal, R&B - Park Hwayobi 'Something Like That': For a deep voiced female singer, you'd want to keep the huskiness and preserve harmonics of the lower registers. Vocals sweep through Azul's large dynamic range as the singer reaches the song's climax. One point that could be improved would be microdynamics, or microdetails within the singer's vibrato, though that would likely sacrifice macrodynamics and require coloration by adding warmth.

Light Male tenor, R&B - Naul 'Emptiness in Memory': Male vocals are typically not as smooth as female vocals, as they usually have grittiness and more chesty mixed voice. Azul's midrange with its adequate bite and crispiness captures these aspects well and brings this song close to its full potential, having a balance of sad emotions (associated more with darker iems) and energy/upliftedness (associated more with brighter iems). Personally I would prefer more coloration towards lower mids, but there's little to complain.

Deep Male baritone - Kim Dong Ryul 'Walking Together': Deeper male vocals risk becoming boomy and muddy when there is a bass elevation. Azul keeps the vocal texture clean, and some meat in the vocals is traded for clarity and openness.

Orchestral - Tchaikovsky: Serenade for Strings in C Major, op. 48: A piece heavy with stringed instruments. Strings hit hard and details are captured clearly up to the reverb and unfold a wide orchestral space. Separation and dynamics (where the band enters together from a quiet start and you get to the full amplitude of it) are amazing on orchestral pieces.


Some comparisons (limited to iems I own):
Etymotic ER2XR (going as low as $60) - A diffuse field tuning with some elevated bass. A budget offering that I have had for a while, this iem surprised me with its detail retrieval for the price, however its shoutiness got to me after awhile.
Vocals feel more spread out rather than focused, and treble extension is not its strong point, so higher pitched instruments are mostly drowned out.
Going from this to Azul, the stage is opened up and detail in the mids is slightly improved, at the expense of bass slam and some warmth and grittiness that would be helpful for deeper male vocals. I do prefer Azul to ER2XR, plus the fit is much more comfortable =).

ThieAudio Monarch ($730) - A neutral subbass-boosted tuning, this iem gives lots of fun with an ethereal cleanliness paired with subbass rumble in many songs. However, if it's mainly vocal quality you are going for, Azul is more natural sounding with less shoutiness, and enough lower mids to balance the upper mids. Treble in Azul is more tactile, as opposed to softer in Monarch.

64Audio U12T ($2000) - W-shaped signature, subbass boosted, slightly dark laidback midrange which favours male vocals, and with treble peaks past 10khz which contribute air and spaciousness. During my time with U12T, I sometimes wished for more bite and energy in the vocals. Granted, center imaging might be sacrificed if upper mids is boosted. Don't expect Azul to fight U12T in terms of technicalities, but tonality and detail retrieval-wise, it can challenge U12T in the mids/vocals, even with only 2 BA drivers.

QDC 8SL ($1410) - My main iem, 8SL has a coloured signature with a slight bass boost with warmth to counter the treble spikes and extension that is similar to the QDC flagship QDC VX. Vocals have amazing microdynamics, but falls a bit flat with macrodynamics and unnaturalness (bias towards chesty vocals) that could be attributed to the early pinna gain. Azul therefore brings something new to my collection with a larger dynamic range and without any uncanniness in the midrange.

For about $300 USD, Azul fills a niche in the price bracket. Where well-known favourites ER4XR/ER2XR's and Moondrop Blessing 2's approach to neutral are too shouty, the Azul keeps things controlled, with a more natural-sounding midrange. Given the current market that is tilted towards bass-boosted iems, the Azul fills a void for audiophiles who just want to focus on midrange goodness. Personally, Azul is pretty close to my frequency response target, and I'm happy with my purchase =).
Last edited: Apr 26, 2021
Reactions: Victory112, Whymez, Redcarmoose and 1 other person