Pros: Miniscule price. Comfort and crazy good sound after diy modifications.
Cons: Very long 4m cord. Needs some modification to get the best from them, but quite easily done.
Hi all, I have always had a pair of headphones of sorts...
during high school in the very early eighties, my mom bought me a small stereo radio casette player and since I was at boarding school, you are never alone and good set of cans seemed to be the way to go. So for my next BD, I begged and put up my best smile at the same time and my poor mom gave in once more - I got myself a 'nice' pair of Kenwood KH-33. The shop also had the higher end model KH-55, but this one was about double the price of the KH-33. I retrospect, I think my mom actually used reverse psychology to get me to purchase the HP, so she could have some peace and quiet when I was home for the holidays. Well, I certainly enjoyed the Kenwoods for probably 15+ years and eventually sold them. They were very nice at the time I bought them and I was happy with them, but somehow used them less and less. When I sold them I still thought: I will probably never own another pair as good as they were - boy was I wrong!

Anyway, I had a bit of a dry spell from the late 90's and early 2000. Then around 2006 I again decided to try and give cans a go: This time it was a set of Sennheiser HD515. It was quite a lot of money at the time and I was dissapointed from day one - just way too bright and no real soul. After agonizing if I should sell em or not, I just decided life is too short: I sold them for half price to my friend that liked it 'bright'. Days after I sold the HD515, I stumbled upon the totally unknown Philips SHP895 at the same shop that I bought the HD515 months before. The shop sold them as low end but good value. They only had the one pair and weren't planning on getting any in again. I listened to them in the shop and decided that they sounded a lot nicer than the HD515 for very little money, so I bought them. I used them very little though and preferred listening to speakers over these any day. They did not sound as open and airy and sounded a bit muffled. I sort of wrote them off and put them back in their box and there they lived for quite a few years...

Early 2013 I saw a used pair of HD800's for about $650 and jumped at the opportunity - these almost never come up for sale used in South Africa - which is probably a testament to how much their owners like them. Anyway, as reference, I packed in my Philips SHP895 to at least have something to compare the HD800 to. (I never got rid of them - they were just to cheap to sell) When I auditioned the HD800, I did compare them to the Philips and it was 'night and day' so to speak - in favour of the HD800 of course. The HD800 was so much more open and a lot more comfy. I was sold on them and went home with both. Here is where reality kicked in. With extensive listening I started to doubt my decision as to use the HD800 as my 'main' system. It was just too fatigue'ing. I built up my stereo kit again and eventually sold the HD800. I still wanted a nice set of cans, but just not as 'overtly detailed' and unforgiving.

I read up a lot on this site and others and I almost bought a pair of Beyer 880's, but decided that I should not buy another pair of cans without auditioning them properly for myself. I also read other sites that have modded some headphones to become 'better'. I saw a specific mod about the mid-range Sennheiser HD555 being modded, etc. It all sort of made sense to me. I decided to grab my Philips SHP895's and see what they look like inside and see if I could use any of the mods that was used to good effect on the Sennheisers. I had nothing to lose after all - I weren't happy enough with them to use them regularly. They were a bit uncomfortable to wear even for short periods and just did not sound 'out of my head' enough. I also noticed that by this time, the plastic trim on both sides of the headband had cracked and the one side had now broken off. No biggie, it was just a small piece and does not actually make anything weaker.

I opened them up and did not really see much that could be done. I also stumbled upon a Russian site that had a whole 'Appreciation thread' dedicated to the SHP895. I did a Google Translate and read it all, but unfortunately, there wasn't much modding info there either. During my searches I did see that the HD555 and HD595, etc. had a similar fibre covering material glued to the front grill covering all openings, except for the centre portion where the 'voice coil' is. In the Philips, this is covered completely. I decided to try 2 mods. I took a bit of a chance, as I could not establish that it has been done before by anyone else.

1) I carefully cut away the fibre cloth mesh, just in the centre over the voice coils.
2) I machined away some of the protruding plastic that sort of gives shape to the foam ear cups.

Number 2) made it a lot more comfortable to wear for extended listening sessions and also even took some of the pressure off the top of my head.

What I did not count on, was what a difference number 1) made - this is what I always wanted headphones to sound like: pretty linear, detailed and open, yet slightly forgiving and warm in presentation. Man, no more regrets selling the HD800's. Even if someone offered me the permanent free use of the HD800 or the modded SHP895, I will not think twice - the sound from the modded Philips is just soooo fine and very easy to listen to, even for extended listening sessions. The Philips could still be more comfortable, but the sound more that makes up for it. Maybe I will re-look the comfort issue again some day - just maybe I can improve it still. If anyone still has a pair of Philips SHP895's stashed in your cupboard, please try this mod you have absolutely nothing to lose. 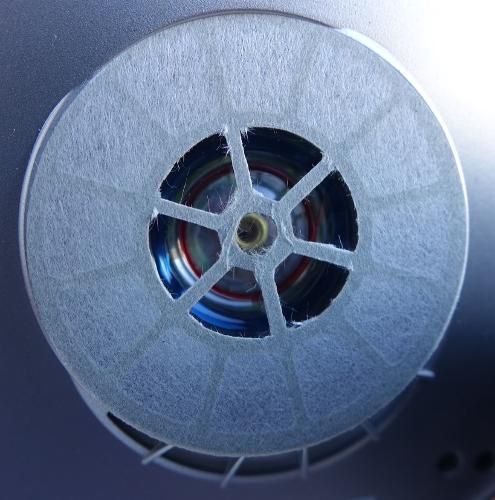 Please note: if you are going to do the mod, use a good quality blade and use absolute control and do not go any deeper than you have to. I cut all along the plastic bracing. there is quite a bit of space behind the the fabric, but I still tried to go only about 1mm in through the fabric - and only do the centre round area in front of the voice coil area. There are 6 little sections and a small round portion right in the middle that needs to be cut away - you may be floored at the result - I was.

Another note: I very recently purchased an aftermarket 1.5m replacement cord off eBay to solve the issue where the stock cord is just way to long for most listening applications. Anyway, I was immediately disappointed with the sound of the 1.5m aftermarket cord and immediately went back to the stock cord, which seems to be of quite a high quality, just very long.

Long live my Philips SHP895! (Needless to say - they are never going into storage ever again)

Still have these, but after some serious comparison, I have found that the Philips SHP895 does have a slight boominess to the bass, even when used on a decent HP amp. Would like to downgrade the SQ to a 3.5 down from the original 4.5 I gave it.

Still have em and love them even more now. SQ is up to 4.8/5. I have since found better cords and have also tried various other high end headphones, but this baby is still the best.
Reactions: alexst

alexst
Totally agree - very, very nice sound, especially female vocal, good for long listening and can handle all music genres.
Form me SHP895 - do it all headphones for bargain price...

aperture
I couldn't agree more. I bought this as sale five years ago for $25  USD. There were like 5 of then on sale. After I got home and it was just stucked in the house for a weeks and never opened it.. when eventually tested after a week I was surprised on what I heard. I went back to the store where I bought it so that i can get more.. unfortunately it was already gone.
Read more…