Portable closed-back planar magnetic headphones: The OPPO PM-3 combines true audiophile performance, elegant styling, noise isolation and portability into a pair of sleek lightweight Planar Magnetic headphones. With the PM-3, users can easily recreate the experience of listening to a pair of flagship headphones on a flagship amplifier or a high quality 2-channel speaker system in an optimized listening room, but in a portable form factor that can be taken anywhere. Tipping the scale at just slightly over 10 oz., the PM-3 is the world's lightest closed-back planar magnetic headphones. This makes the PM-3 the ideal headphones for a person who is always on the go. Its elegant styling and exquisite workmanship make the headphones a pleasure to wear in public, and its light weight and exceptional comfort make it easy to listen for hours on end. The closed-back nature of the PM-3 provides isolation from the outside world, blocking out the surrounding noise while avoiding sound leakage from the headphones.
Reactions: reddog
Share:
Facebook Twitter Reddit Pinterest Tumblr WhatsApp Email Share Link

I'm 38, so my hearing is possibly not the same as in my 20s. I like various music genres, mainly prog rock/metal, blues and some classical music. I'm not into rap/hiphop/EDM so I don't have a strong preference regarding excessive bass quantity.

I've purchased this item myself, it was used. I have no affiliation with the manufacturer nor was this a sponsored review of part of a loan tour.

Unboxing is a pleasant experience, the box is stylish just as the carrying case. There are a lot of cable options (without mic, with mic: Android/iOS).

I found this very comfortable. I have average sized ears and the fit was good. However, the earcups are small so it may not be suitable for people with big ears. 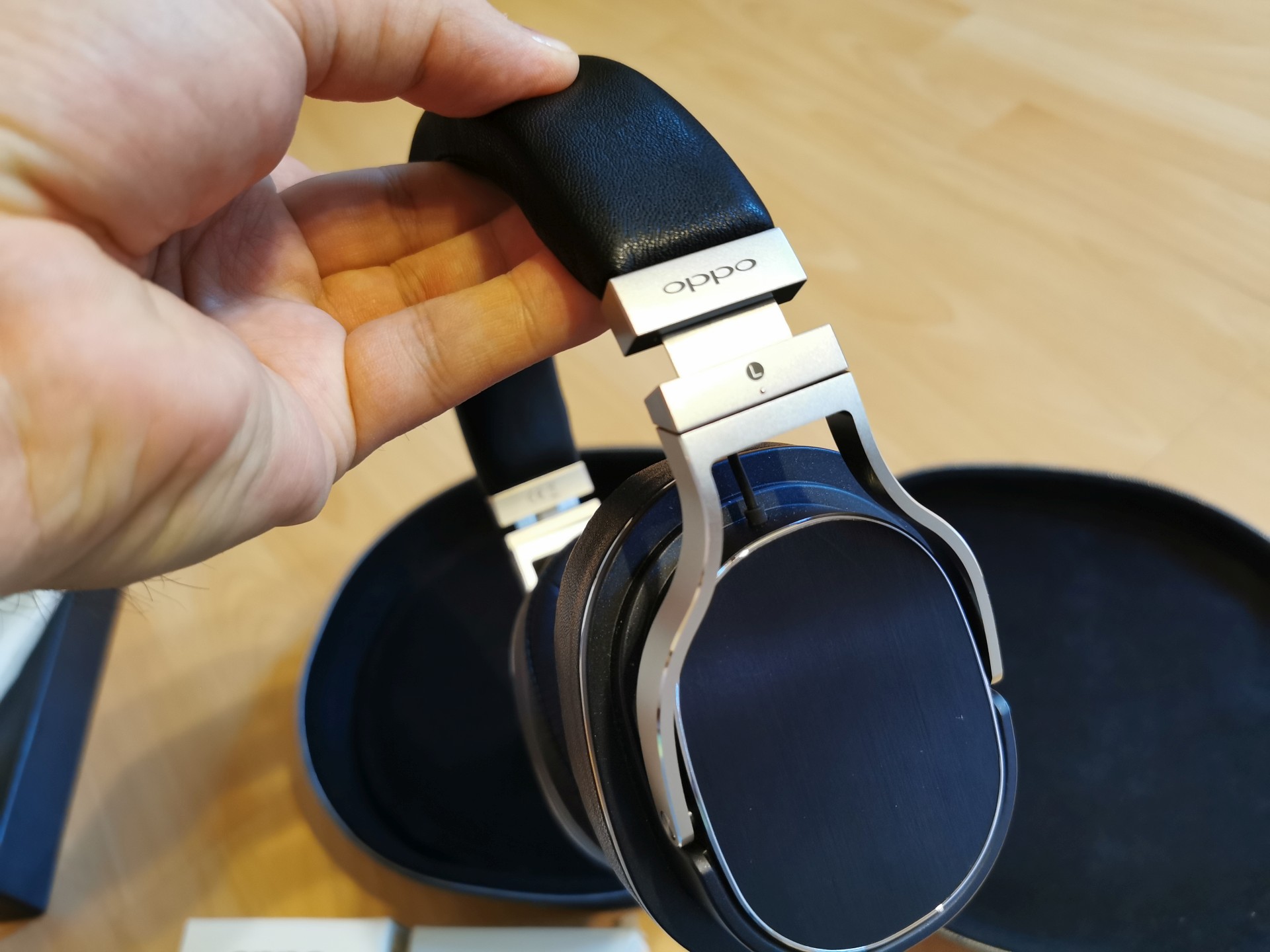 I very much liked the sound, but I think it can be further enhanced with some EQ.

The bass quantity is sufficient, and quality is great. Does not bleed into the mids.

Mids are detailed, engaging and emotional.

Treble is a bit veiled, it rolls off a bit. This can be corrected with some EQ a lot.

Overall, I find the tonal balance pretty good, it is fun to listen to these headphones. Detail retrieval is good enough. 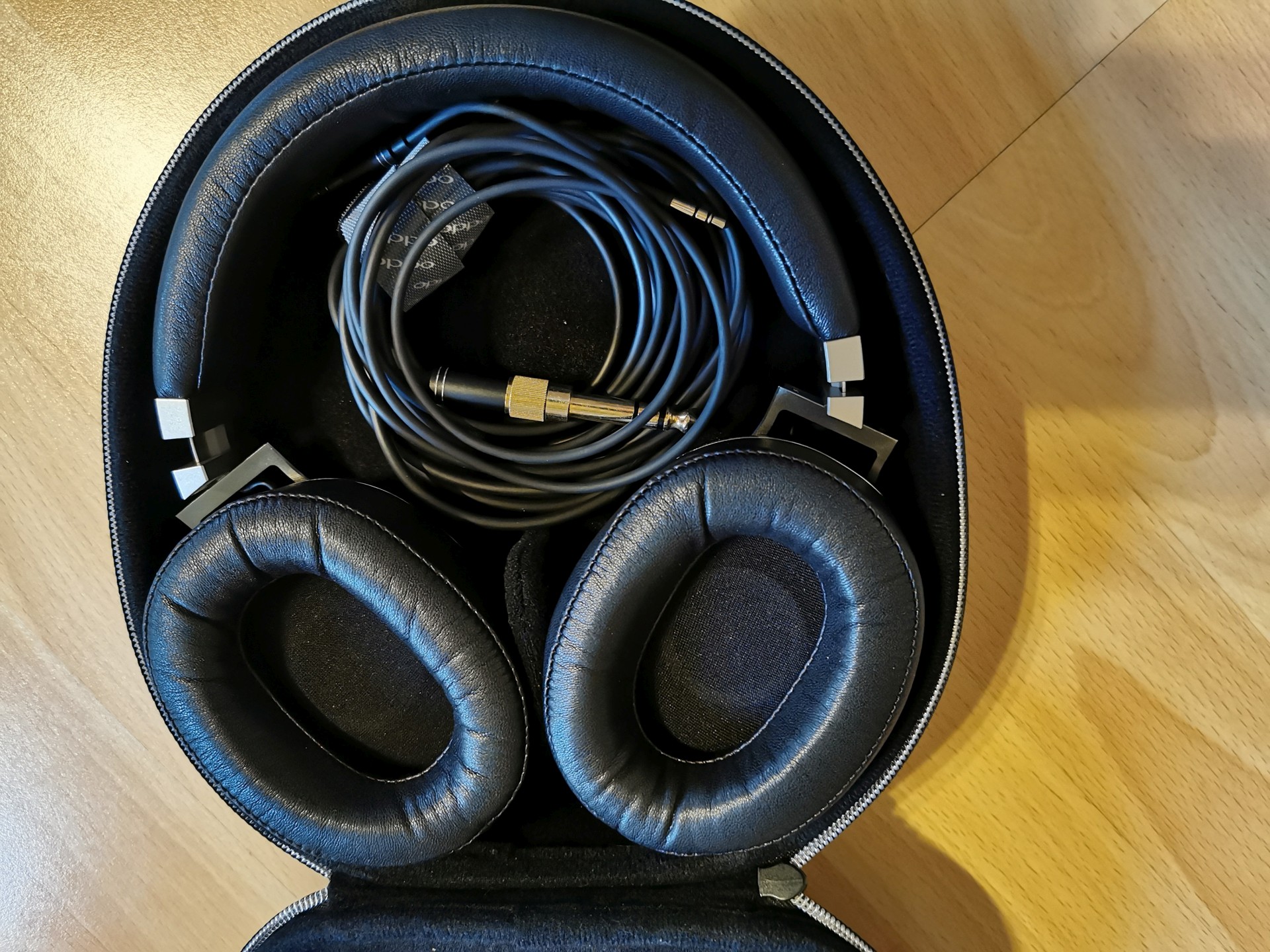 I found the Shure 840 more linear, and bit more detailed. However, the Shure was not designed with portability or syle in mind, that is for s(h)ure 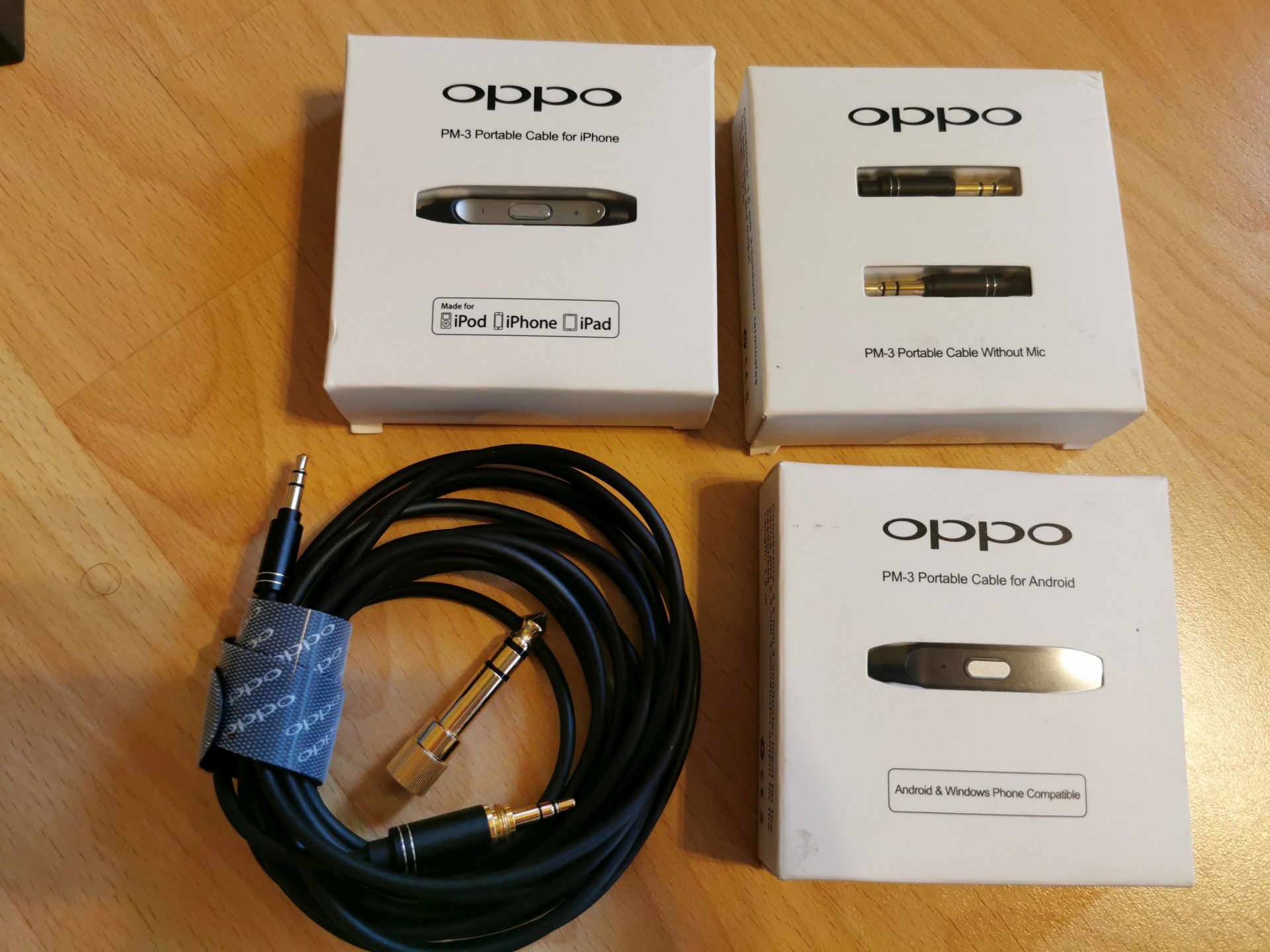 Very easy to drive, but to get the best sound out of it, make sure to use a headphone amp. At least an USB dongle, like the E1DA 9038D. 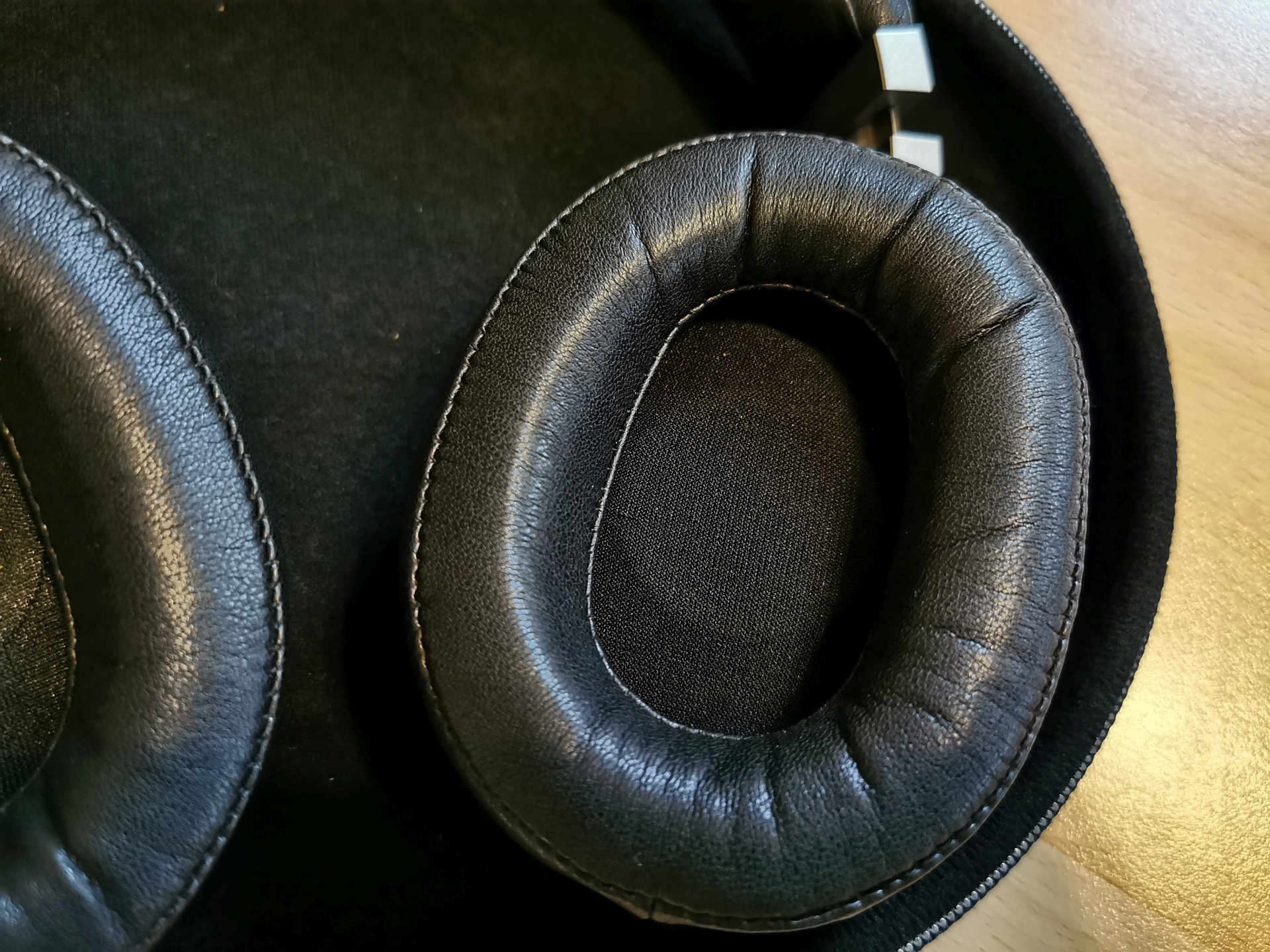 I loved this headphone, but I prefer transparent, extra detailed sound. If that is your preference too, then there are better alternatives than the Oppo PM-3. However, this is a wonderful headphone suitable for portable use.
Pros: Neutral sound (I prefer flat sound for the most part and play with it from song to song), Top tier build quality, good isolation without clamping, comfortable, easy to drive.
Cons: Cable is too long
I just picked up a set of PM-3's about a week and a half ago. Actually, the pair I'm using isn't mine, but the store owner tossed me the demo to use while I wait for my brand new set to come in. This is my first venture into planar magnetic. I was looking at the PM-2, but he wouldn't budge on the price much considering they are discontinued and the one set he had was a demo. I also heard the PM-2 are nowhere near the PM-1, and open back did concern me for listening at home (mom nagging because I do listen to music quite loud). I went into this set expecting a closed in sound, as magic is not real and one can not produce an open sound without some sort of back venting.

What first drew me to these phones, apart from being planars, was the impeccable quality and looks. I know know there is no leather on them, but the faux leather is of a better quality than real leather on other phones. When I slipped them on in the store, I felt immediately comfortable, no clamping, yet the outside world is blocked out. Some have stated they get hot wearing for long periods, but I've listened to them outside at work for 30 minutes in 30 degrees Celsius and have no complaints. The rest of of the cans look sturdy, well designed and...well essentially a Chinese company showing it can kick the quality of other manufacturers who have their stuff built in China. Now I'm not a lover of Chinese stuff, but I firmly believe manufacturers put effort into their stuff when it is made where the company is located.

Setup: I have been using an iPod with FIIO amps since I began getting into higher end portable audio. Currently I'm using a FIIO E12, and a 30 pin to lightning DAC adapter to my iPod. I hope to eventually get a DAC that works with OTG from my LG G5, but the E12 (and whatever the colorizing of sound it does) is my standard for now. Much of my music is lossless, a lot of it 16/44.1 or 24/44.1. There are a few 320 quality mp3 songs. My main listening includes jazz classics (Paul Desmond, Oscar Peterson, Miles Davis, etc), some more modern jazz and funk, classical, classic rock, classic pop, and 90s and early 2000's hip-hop/ rap. There is also some metal in there like Rammstein, and some celtic music, ranging from pure bagpipes, to celtic rock.

Bass: The bass on the PM-3's is somewhat strange. They clearly aren't a bass headphone, but they are capable of massive (to me) bass. With classical music, jazz and most rock, I find bass full and proper, not bloated, but there is the odd song where I feel the need for bass gain to be used on the E12. Now...put on Wiz Khalifa On My Level, and these cans rumble. There is no distortion even with this level of bass, and they extend below audible bass levels, to the points where you hear nothing for the most part, but feel the drivers going. Now, I'm no basshead, apart from the odd tune here and there, but the PM-3 surprise me a lot. On first listen, one would expect neutral, light bass, and with other similar signature phones, you can hear them fall apart when pushed. The PM-3 however, they can dish out what you want.

Mids: The mids on the PM-3 are extremely clear and detailed, to the point where breathing comes through, or even quiet background noises. The soundstage is the only thing that hurts the mids a tad, but the soundstage is about as good as it gets for closed back. I found the mids to be really present in the Bach Cello Suites, where every note sounded with power, yet every note rang distinct. With the business of many parts of the cello, such clear sound is not easily produced in other headphones that I have.

Highs: The highs are very clear, although slightly laid back on these headphones. I believe my E12 does have a warmer amping, or at least I've read it does, so this may be causing the highs to be recessed more than a neutral amping. Listening to Vivaldis Four Seasons, however, the highs of the violins come in strong, brilliant and exciting, letting you really feel the music.

I believe what the PM-3 represent is the superiority of planar drivers, with the ability to play without distortion, and to quickly produce sounds, where dynamics (unless multi driver with crossover) would fail.

My one true complaint about the PM-3 (soundstage and separation not being one, as I cannot fault a closed back for not sounding open) is the cable length. It isn't so much that the stock cable can't be useful, but a second shorter, on-the-go length would be nice, allowing one to slip their player in their pocket and not trip over the cord while walking. After a short bit of research, I found the Moon Audio Blue Dragon, but I am undecided as to whether it benefits the sound enough...paying the price to get a better length is not worth it on its own.

Overall, near perfection, open back is about all that would improve the sound, but that would sacrifice privacy and isolation.
Pros: Good isolation
Cons: Everything else. Lack of mids and treble.
I've tried them several times, on fan meetings or audio expos. Sorry, but for this price they sound flat and terrible. Definitely no buy IMHO. They lack of mids and highs, everything what you can hear is bass. The one and only advantage was proper isolation. There are many better headphones, ie. Focal Spirit Pro/Classic, Audio Technica M50x/70x, AKG K553.
Reactions: bidn
Read more…

The pleather on my headband and ear pads is de-laminating after two and a half years of regular use. I live on Vancouver BC, so the headphones have not been subjected to sweat.

I purchased the Brainwavz flat sheepskin pads for my closed back PM-3 headphones.

With the Oppo pads un-clipped (using a pocket knife), the pads stretch easily over the ear cups.

The sound signature changed to a brighter presentation, which I actually prefer as the PM-3s are reported to have a warm signature. My old ears need a bit of treble boost.

The pads are very comfortable, with a larger interior to accommodate my large ears.

The attenuation of outside noise has improved a lot. I cannot hear anyone talking to me.

The only down side is that the pads squeak when you move your head quickly... not good for head-bangers

Lying down on my pillow, once settled in there is no squeaking.