Thanks to Nouske for the sample

Build Quality:  Very nice, it all would appear to very nicely put together.

Isolation:  Good.  Towards the upper end of what a dynamic gives.  So fine for out and doubt, on a bus etc etc.  Not really quite up to Tube or flight levels but still easily enough to get yourself run over.  Please do remember to use your eyes people.

Comfort/Fit:  Great.  They are a bit on the biggish side but in the ears they went and I had no issue seating them or any comfort issues.  I was happy to use them for several hours at a time with no issues.

Aesthetics:  Weirdly their colouring options are gold, black or wood.  Wood isn’t unusual in itself but they look radically different from the black and gold ones.  Presumably it’s the same in side however.  I can’t say I’m wild about gold as a rule, I’d prefer silver but the black ones look pretty nice.

Sound:  So not one but two drivers in them, not any that they are hybrids with one dynamic and one balanced armature inside.  Just even two years back people would have thought you crazy trying to pair the two radically differently behaving driver types into one, not just that, but into one this price?!?!?!?  The dynamic in there shifts the low end air movement.  It’s big, powerful and can give a big rumbly sound, feel too in a way BA’s can’t.  The bass may be the star of the show in fact.  It’s clearly very well-articulated but not hard nor over aggressive.  A little soft maybe for some perhaps but I find this to be superbly easy on the ear.  It’s not flabby, it’s just a little soft at the edges with a more rigid core underneath.  Rich deep lows sound vigorous and powerful when called upon however it’s more natural state is a sweepingly melodic tonality.  It’s just so nice on the ear.  Mids are touch pushed back and a little one the warm side for me but again they are so nicely easy on the ear.  The detail levels are good (unsurprising given it’s a BA at work) yet not overly so.  These are very much about enjoying the whole ensemble than extracting out any particular points.  Thus the highs share these traits, it can near a touch edgy when pushed but mostly it’s likewise not about hurling detail at you.  It’s a delicately smooth and enjoyable dusting of upper end shimmer.  It is mostly anyway, if you start to push the volume they can get a little over excited in the treble.

Quantity wise it’s somewhat V shaped with a notable slant towards the bass, they are a bassy, warmly pleasing earphone.

Value:  Who would have ever thought a couple of years a dual driver, hybrid IEM would go for under US$50?  There is lots of tech in there for your money.

Con’s:  Bass may be too big or too billowy for some tastes.  Highs get a touch unruly at volume.

Pros: Affordable Price, Very Good Build, Comfort, Impressive Resolution for Price
Cons: Lack of Accessories, Cable Noise, Isolation, Somewhat Unnatural Timbre
Introduction:​
Nouske is a company I’ve never heard of or seen on Head-Fi or on the internet as a whole. I was first contacted by their rep, Laura, back in August regarding a new IEM they were releasing. Laura informed me that it was to be a single BA + dynamic hybrid IEM and asked if I would be interested in giving feedback and reviewing it before its final release. It seems like the IEM wasn’t quite ready yet as she didn’t give me the ok and ship the IEM to me until late September. I was told that Nouske is a Chinese company based in Shen Zhen, but on their website, it says that the products are “designed in Denmark.” I found this a bit misleading as now I’m not completely sure if this is a Danish company with production in China, a Chinese company with Danish designers, or something else completely different. Either way, what I wanted to know is if this new company can make good IEMs or not. The Nouske NH-14 Hybrid IEM is looking to be priced at 50 USD with a, at the time of this review, TBD release date. 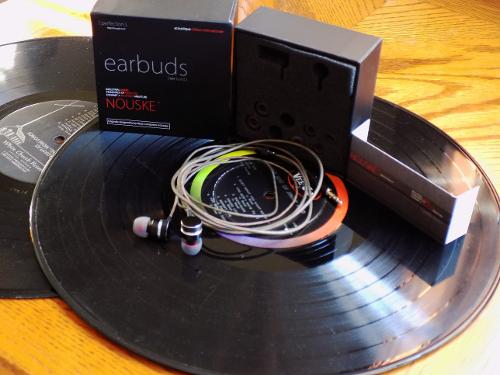 ​
NH-14 With its Packaging​
​
Packaging and Accessories:​
The NH-14 comes in a very small, ergonomic, and simple black box. Inside, the overall presentation is quite nice. The ear tips are nicely displayed with the housing of the IEM on the top later of padding, while the bottom layers hold the cable.

Accessories included are somewhat bare bone. There are 4 sets of tips given, two of which look to be the same size (medium). No other accessories are included. I think it would have been a nice touch if there was also some sort of soft or hard case included, but I guess it’s not the end of the world. 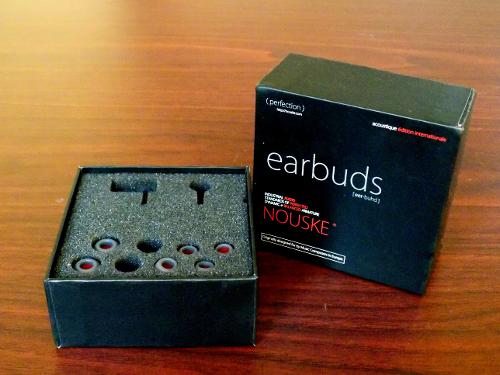 ​
Closer Look at the Packaging​
Build Quality and Design:​
The build of this IEM is very solid, and certainly very impressive for a 50 dollar product. All the important parts of the IEM are constructed of metal – that includes the earpiece, Y-split, and the 3.5mm jack. I’m also quite a big fan of the cable. The looks of it reminds me a little of the cable you find on the Vsonic GR07. It’s fairly thin, tangle free, and feels slightly rubbery and sturdy. Overall very good build for a budget IEM.

I had a few small problems with the design of the earpieces. First off, I found the insertion to be a bit shallow. Couple that with the vents in the back of the driver, and you get an IEM with fairly mediocre isolation. In addition, I found the left right indicators a bit of a pain to read. They’re small and written on the black strain relief (which is very good by the way), making them super hard to read.

When it comes to portable products, I’m not a big fan of straight 3.5mm jacks. Unfortunately, the NH-14’s jack is straight. The good news, though, is that it’s pretty thin so it should be able to fit through your phone case. The Y-split is also study and with very low profile, making the cable very usable and comfortable overall.

One last little thing that I think is really nice on this IEM is that it’s designed with very small studded patterns on them. Not only does that make the IEM look pretty nice, but it also makes the surface IEM easier to hold. I’m not sure if that was the intention of the design, but it does make a bit of a difference when you pull out the 3.5mm jack.

As a whole, I think this IEM is built well and has a nice looking and usable design. The only complaints I have for it is that it doesn’t have a chin slider, and the cable noise can be a bit distracting. The Y-split is located at a fairly good location so it’s not the end of the world, but I do like having the option to adjust it myself.


Listening Impressions:​
As you may expect from a budget price hybrid IEM, the NH-14 is a pretty bassy IEM. The vented bass driver means that it can pump out a good bit of bass. The bass also extends impressively low, starting to roll off past 50 Hz, but still able to muster out some rumble at around 25Hz. The sub bass is very prominent on the NH-14, so you won’t miss the bass line on any song. However, it does struggle a bit keeping up with the overall texture of the lower end, so the bass can sound a little one-noted. In addition, the mid bass is actually not all that prominent relative to the sub bass, so you get sort of an interesting “slam to rumble” ratio if you will. The amount of bloom you get for each bass hit just seems excessive compared to how hard the hit is – which by the way is impressively tight. The bass does a good job keeping good presence and fun without being overly distracting, but at the end of the day isn’t particularly impressive from a technical standpoint.

The bass does bleed into the mids a bit, and the midrange is slightly relaxed but remains present and very clear. The lower mid emphasis can cause vocals and instruments to have a somewhat unnatural tone. Especially with lower resonating syllables like “uh,” you can really feel the vocals resonate in a bit of an unnatural way. Despite that though, I felt the level of detail that the midrange was able to produce was good and instrument separation is also very well done. Instruments actually have very clear presence and good space and air between them, giving the NH-14 an overall clean sound that doesn’t feel overly warm despite a fairly hefty low end.

The upper register of the NH-14 is relatively smooth with very small peaks at 3 and 5 kHz. Extension isn’t too bad overall, with some roll off past 15 kHz or so and dropping off past around 16kHz to my ears. Upper range attack and decay are surprisingly fast with a good bit of sparkle that doesn’t sound harsh by any means and the level of detail produced in the treble is also a plus for this IEM. The only thing that didn’t quite line up to me is the overall tone of the treble. To me, the treble has good sparkle and energy, but can sound a little plasticky. Snare and hi-hat hits somehow don’t quite have the metallic shimmer to them. Nonetheless, the amount of detail and overall performance of the upper end of the NH-14 is very good in my opinion.

The NH-14 sounds very spacious for an IEM of this price, partly due to venting and partly due to a present treble response. The overall headspace itself isn’t anything mind-blowing though. The NH-14 has a maybe slightly above average sense of width for an IEM of its price, but still lacks in the sense of height and depth like almost all IEMs at its price. 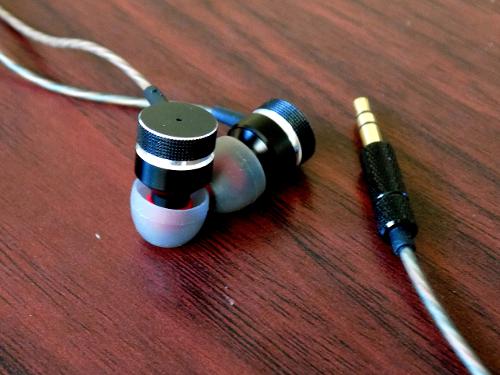 ​
Housing of the NH-14​
Ending Thoughts:​
Looking back at my listening impressions of the NH-14, I think my negative comments of it really all connected to one thing: timbre. To me, the timbre of the NH-14 is just a little off. Lower instruments can be a little too resonant while upper range instruments don’t quite have the metallic edge they should. However, despite the fact the overall timbre of the NH-14 irks me a little, I can’t help feel that the NH-14 is actually a very easy to recommend IEM and I'm actually quite happy with it. The sound has good detail, good sense of space, and very good presence and separation with instruments. On top of that, the NH-14 is comfortable and the build is on point for an IEM of its price.

The timbre is a little unnatural to me and the tuning of the NH-14 certainly took me some time to get used to (as someone who very much prefers a flatter response), but I really think that the NH-14 is a very good piece for those that want to keep the jammin’ and dynamic sound that they’re used to from their earpod or skullcandy, while providing an impressive amount of resolution – all without breaking the bank.

Link to Product on Amazon: http://www.amazon.com/dp/B018JKOK1C