Menu
Log in
Register
Noble Audio Savant II - Reviews
Overview Reviews (1) Gallery
Pros: Neutral, with a touch of warmth
Bass goes very low
Extremely clean
The list goes on and on
Cons: Ehm, idk
I guess the 2pin sockets can be a bit tight?
Female vocals can sound a tiny bit cold I suppose
Really just forcing myself to put something here so I don't sound too positive
The last Noble IEM I reviewed was the Sage, and my impressions of it were pretty mixed and somewhat negative. I will skip over the company introductions as there is a lot to be said about the focus of this review, the Savant II.

First and foremost, each Savant II is a unique, one-off design. Each one is also absolutely stunning and choosing which one to purchase was an absolute nightmare. Couldn't design so I got 3 and now half the family is walking around with Savants. Some are done by the Wizard himself, some designs are painted by his wife. Personally I had a pretty strong preference for her designs as they were truly breathtaking.

I had the luck of having my first listen to it at the Canjam London where the rest of the Noble lineup was also available. I started off with their TOTLs, loved the Katana, really liked the other two, and then made my way through the rest of the lineup. Honestly, I think the Savant II easily outperforms everything up to (and including) the Django. The way I see it, the Noble lineup could comfortably be scaled down to M3, Savant II, Katana, Encore and Khan. Everything else is pretty much redundant.

The value you get on these is bloody f*cking exceptional and continues to blow my mind on a daily basis. Writing this review has been an absolute nightmare because I'm finding myself forced to compare it to IEMs at about double or triple its price point, and the Savant II really holds its ground there. I stll have no idea how they achieved such a clean and balanced sound signature with that level of detail and instrumental separation using only 2 BAs. It is my most recommended IEM for anyone looking for something that is largely neutral in the under 1000 price point.

Okay, back to the review - normally the Savant II comes in the Noble packaging (some of the best you can get in the industry), with the Pelican case and all the accessories included. Since I purchased all 3 of mine at the Canjam the packaging was separate, but I "traded" that in for a small discount on a friend's Savant II (following my recommendation). Since I have quite a few Noble IEMs now losing out on the packaging wasn't much of an issue, as I use the Pelican case on an almost daily basis from my Katanas.

The design I covered somewhat already, each is a unique piece and in my eyes one of the finest designs the industry has to offer. Then again it is Noble so that has become part of the expectation by now. My phone's camera isn't the best out there but you can see the level of detail and finesse involved:

Put it under a flashlight or the sun and you see these deep pink/purple colours come out.

Warning: you might find yourself staring at it for hours at a time 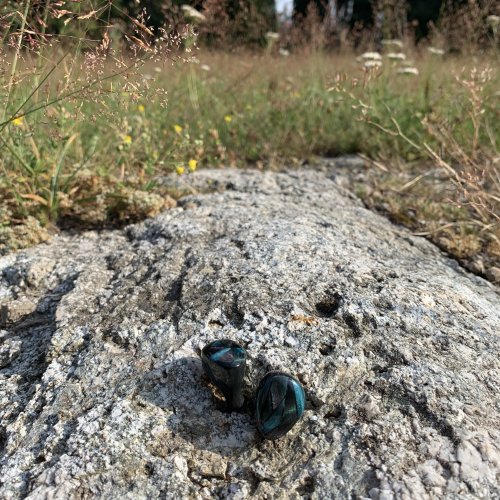 The stock cable is the current 4wire black Noble that comes included with all their IEMs except the Khan. Not the biggest fan, the pins tend to get bent pretty easily, but the stock cable is usually the first thing I replace anyhow.

(All the listening has been done with a AK SR15)

The lows: I am the polar opposite of a basshead, so take my comments on the lows with a grain of salt - I find the bass quantity to be just right, where it is there, but in no way dominant or center stage. The bass quality is exceptional, with plenty of texture, depth and extension.

The mids: If you are after mids then you certainly know Noble, as mids are generally speaking their house special. The Savant II has that Noble DNA deeply ingrained in its crafting, and you can really tell once you hear the vocals and instruments at work. They are extremely clean, relatively smooth, but precision has been the priority here imo. The lower mids have incredible energy and male vocals make you feel like you are then and there listening to the music in front of you. Female vocals also have that accuracy, but I feel like they lack the same intimacy somewhat, and so do instruments that operate around the higher mids.

The highs: I wouldn't call the treble a large weakness of the Savant II, but I would go to say they've chosen a smooth approach as opposed to harshness and precision. At no point will you hear siblance or excessive treble, but I do find myself missing some extension every now and then, as well as that sparkle that certain IEMs manage to pull off. That being said, this is a two BA design and I am especially picky when it comes to the highs. I can't expect it to pull off mids and lows that are this good and still have that super high treble extension with the highest level of precision and some sharpness. I am happy however that they haven't tried to overdo the IEM by forcing highs into it and having them end up siblant or thin.

Technical ability: this is by far the most impressive aspect of the sound. The level of instrumental separation, as well as the soundstage width and depth are off the charts and the absolute best I've heard at this price point. The instruments are also presented with an extremely silent background, without any added energy or glow. The Savant II places you on the first row and unfolds the performance in front of you.

Cables (skip over if you aren't a believer): to my ears the savant II benefits enormously from an 8-wire cable. I have been listening to mine with the new 8wire SPC from Noble and the improvements in instrumental separation and soundstage depth were easily noticeable. That level of technical ability only gets enhanced and the result is even more impressive. 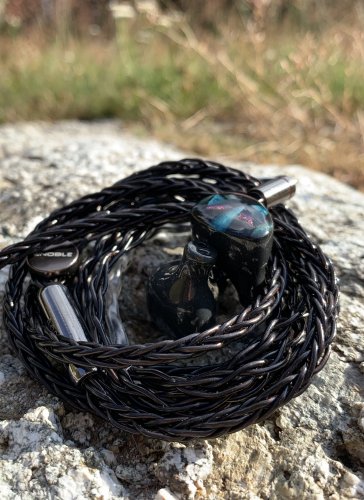 Conclusions: I don't even know what to say here.... go buy yourself a Savant II regardless of what you own I guess. I have the 64 Noir, U18t, A18t, Katana, Andromeda S and FiR M5, each of which is between 2 and 7 times more expensive than my little Savants, but regardless they get tons of play time and are one of the most enjoyable IEMs I own. As I said earlier, quite possibly the most heavily recommended IEM I own, at any price point, but especially at 5/600 dollars.
Reactions: Wes S, dhruvmeena96, Ahmad313 and 2 others
View previous replies…

iBo0m
I've been checking the new Noble 8wire cable.. that you praised. I suppose it's soft and flexible because Noble Audio usually tries to make such cables keeping them comfortable for longer listening

. However, it seems kinda thick - is there a big difference in the weight?

mvvRAZ
Compared to the stock Noble cable, it is somewhat heavier yes. However it is very flexible and very light for an 8 wire. I used it on a hike (as you can see from the photos) and at no point did I have any issues or discomforts

At under 200, I think the Noble cable is a no brainer. Otherwise for more budget cables I’d recommend Forza Audioworks

Sebastien Chiu
RMAF will be my first time hearing the new cable. I am super excited to see how it synergizes with the K10c that is my daily.