Custom Audio Cable for High End Headphones. The Silver Dragon is our Top of the Line Headphone Cable. It can improve the listening enjoyment of most high end headphones. Depending on your music preferences, we can recommend either the Silver Dragon, Black Dragon or Blue Dragon if you call direct.

Pros: Improved detail, and in some instances a greater "sense of space" from the music compared to some stock cables. Relatively inexpensive. Many custom options available.
Cons: Not the most attractive. To prevent damage, the hand-made assembly needs more care when using compared to stock cables. 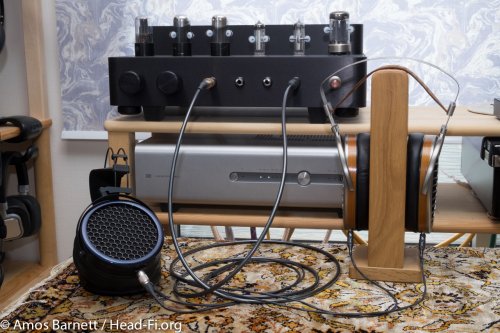 ​
Drew Baird of Moon Audio was one of the very first people to begin making aftermarket headphones cables for Head-Fi members, years before I joined. Despite having expanded into selling headphones and audio equipment, his range of cables hasn't changed apart from upgrades to the designs, and expansion into IEM models. The basic three models are: The budget Blue Dragon, copper Black Dragon, and silver (or silver/copper for the IEM version) Silver Dragon.

I had gathered from various sources that his cables were a relative bargain and as it happened that I'd be visiting friends who lived not too far from him in North Carolina, I arranged to buy and pick up a pair of Silver Dragon interconnects and check out various headphones and equipment.

Later on I bought, second hand, a Silver Dragon for my MrSpeakers Ethers, which gave me a fair idea about the character of his cables. Drew kindly lent me both Silver and Black Dragon cables to use for my Utopia, HE1000 V2 and JH Audio reviews (which I'll either buy or give back).

With the trend for cable makers, both small and big (eg: Kimber) to go with braided designs using fancy splitters, Moon Audio has not gone down this road. The Black and Silver Dragon are old-school designs, both single, 4-wire smooth cables from which the outer sheath is removed to split the wires for most full-sized headphones. The design is not as soft as some of the litz-wire designs out there, so people seeking a physically fancy or super soft cable may be disappointed.

The split left and right pairs are twisted gently (a full turn takes about 5cm or 2 inches) and are individually covered in matte heat-shrink. The split and terminations are covered with branded lengths of heat-shrink. Assembly quality is as good as I've ever had from a company. The only caution is that regions near the heat shrink should not be bent excessively (something which should not be done to cables in general) as it can loosen the heat-shrink. Stock headphone cables from the manufacturer tend to be designed for robustness and aftermarket cables for sonics, so more care should be taken with the latter.

It should be noted here that the descriptions of sound here between products are only very subtly different. Where I've noticed the most improvements has been where a manufacturer's stock headphone cable has obviously been designed with robustness as a priority (Audeze, Sennheiser, Sony and Focal come to mind here) and sonics are a second priority. In those cases, any aftermarket cable seems to be an improvement sonically.

Even if the cost of this sonic improvement can be a lot relative to the cost of the headphones, just as turning the aircon up a degree in Summer only adds half a cent of cost per hour to my electricity bill, that adds up over the months, and so too does the increase in listening enjoyment, however subtle, add up over many hours of listening.

My first experience with the Silver Dragon, on a pair of Mr Speakers Ethers, was that the sound was somewhat muted in dynamics compared to the stock cable. The Silver Dragon primarily seems to give slightly more emphasis to the treble than the Black Dragon, but both have fairly similar characteristics. I remember listening with the HD800, Black Dragon and a custom Cary Audio amp at Moon Audio's HQ, and the whole presentation was a bit too relaxed for my tastes. I'm the kind of person who'd choose a Silver Dragon for the HD800, and did initially for my Utopia review, crazy as that might sound.

What I found switching between both cables was that despite the subtle difference, I could still make out as much detail. With the original HE1000 the Silver Dragon brought out more detail than the stock cable. With the HE1000 V2 both Dragons simply changed the presentation to give a subtle increase in the sense of space in music, where the stock cable sounds a touch more "liquid" yet slightly more closed and mid-forward. Switching back and forth between them on the HE1000 on my Studio Six + Yggdrasil system, the Silver Dragon seemed to bring out more detail and more bass and treble presence than the Black Dragon.

Where the Silver Dragon really shined in the HiFiMan range was with the Susvara. Their greater level of detail retrieval was helped by the Silver Dragon and provided a nice balance to their highly dynamic presentation.

Back to the Ether, and then the Ether Flow, while sounding slightly less "dynamic" than the factory DUM cable, as well as a Norne Audio Litz cable, the Silver Dragon could in turn be described as giving a smoother, or less aggressive presentation.

With the HD800, much as do other aftermarket cables, the Dragons remove the unpleasant sheen the stock cable gives the treble, making them more relaxing to listen with. That is where the Silver Dragon and Black Dragon shine -- where a smoother presentation is more preferable, yet detail is important.

Over I think the best thing about both cables is that they have stayed consistently relatively inexpensive compared to other cables out there, yet make for a good improvement where the stock cable was designed to be robust rather than perform sonically as well as possible.
Reactions: Arthur Li and TaoJones

GreenBow
Please how did you find cable noise with the Moon cables?

I am thinking about buying a cable that will slightly brighten the Focal Stellia. I thought the Silver Dragon might be OK. However it seems you're saying that there was not much between the Black, and Silver cables respectively.

I was under the impression that the Black warmed a little and helped focus, from a review. Then going by the Moon website I thought that the Silver enhanced treble a somewhat.

Currawong
@GreenBow The Silver Dragon is very subtly ligher-sounding than the Black Dragon. But it isn't a typical treble-highlighting silver cable. With some headphones I found that it enhanced detail without making the sound brighter.

GreenBow
I keep trying to reply to you. However I keep hitting character count. Sorry, if it's too much trouble, but I will PM you. I think you must be busy with Head-Fi commitments, and daily life. The sort version of my reply, is the stock cable with Stellia is horrific cable noise. Then, do Moon cables have cable noise?
Read more…