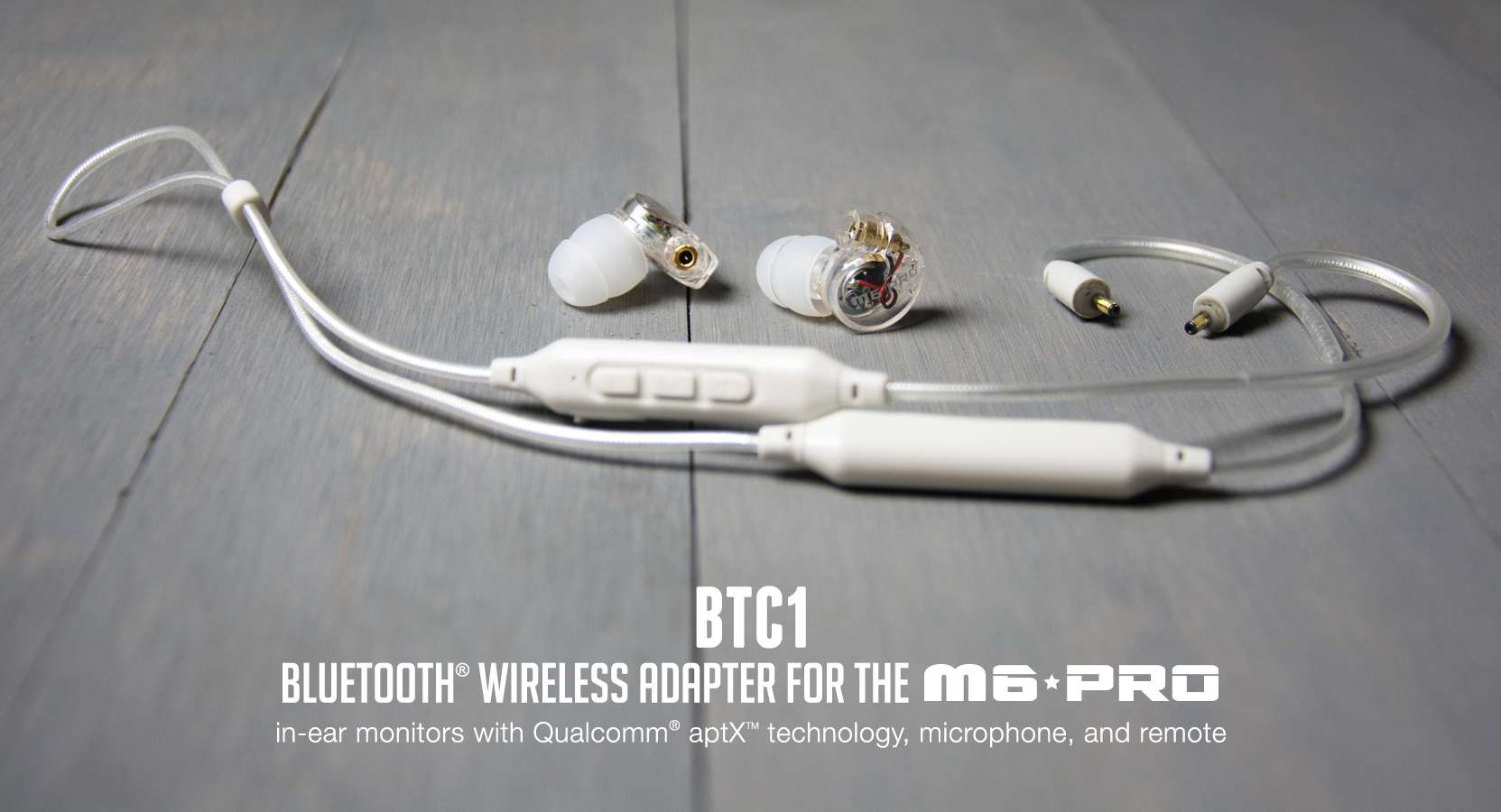 STREAM AUDIO WITHOUT WIRES
Advanced Bluetooth 4.0 technology is compatible with phones, tablets, computers, and all other Bluetooth stereo audio transmitters

Pros: Does everything it needs to. Built and designed as well as the M6 PRO it was designed for.
Cons: A bit distorted in the bass and treble. $60 is a bit expensive for an accessory to a $50 earphone. 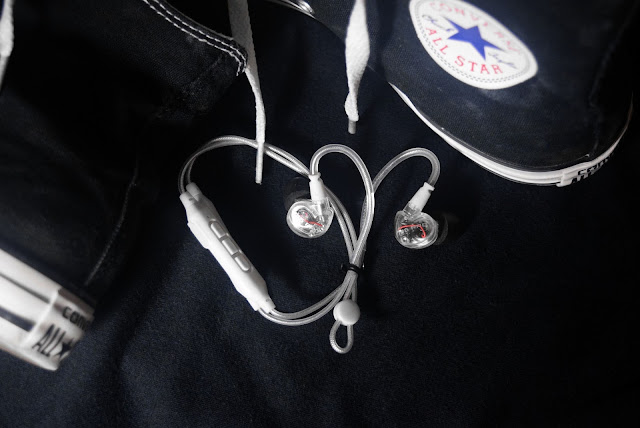 TL;DR: It’s not the best by any means, but the BTC1 ensures your M6 PRO will live on in a world without the headphone jack.

Back in September of 2016, the iPhone 7 was revealed to the world. Along with it came an ominous declaration: "The headphone jack is dead." Since then, all iPhone audio was delivered either through their speakers or through wireless headphones (or through a silly and overpriced dongle, but that's besides the point). This move didn't really bother me, but the fact that just about every major smartphone manufacturer have done the same to their flagship phones seems to suggest that our beloved 3.5mm headphone jack should be put to rest.


(Full disclosure: Mike from MEE Audio sent me the BTC1 free of charge in exchange for this review. They were tested for about two weeks prior to writing this review.) 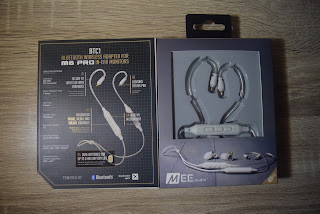 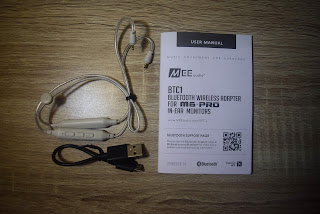 The BTC1 comes in a small box with similar visuals as the M6 PRO packaging, although this one has a window flap on it showing its main features. Besides an instruction manual and a Micro USB charging cable, they don't really come with anything else. This makes sense, considering the BTC1 is merely an add-on to the M6 PRO.

The BTC1 itself boasts a ton of features which, in retrospect, are pretty standard for a typical Bluetooth earphone. It supports Bluetooth connections up to version 4.0, as well as the AAC and AptX codecs for a higher quality audio stream. It has a microphone and remote to control your music player, and has added functionality for taking phone calls and (in some devices) operating the phone's voice control. I, however, am most interested in their dual battery design, which MEE claims will give the BTC1 up to 8 hours of continuous music playback. We'll cover those features later on. 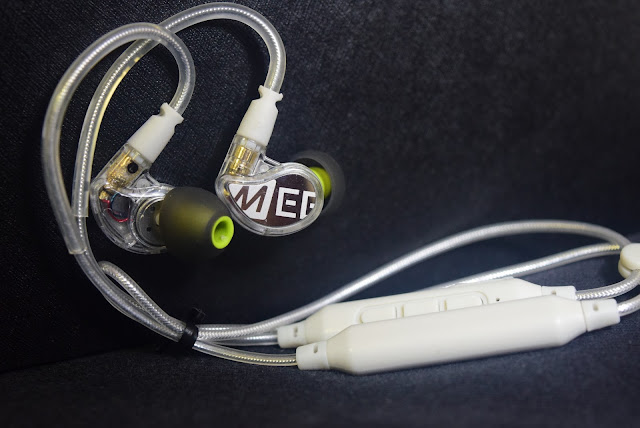 I usually have no problems setting up Bluetooth earphones with my iPad Air 2, and the BTC1 was no exception. The BTC1's spec sheet claims a Bluetooth line-of-sight range of about 30 feet; this held up in my tests, but as with any wireless signal, it will deteriorate with obstacles in the way. I was able to get about 10 feet with the source device a closed wall away, and the signal remained clear even with the source device inside a bag.

As for their hardware, I had no problems either. The cable was easy to switch out on the M6 PRO, and the fit wasn't hard to get right. In fact, I'd say the BTC1 is much easier to put on than the M6 PRO's stock cable, helped in part by the lack of memory wire in the ear hooks and the dual battery design. The second battery, in its separate enclosure, actually adds some weight to the left side, keeping the whole assembly balanced as it hangs around your neck. Seeing as most other Bluetooth earphones in general don't employ this sort of design, I'm again impressed by MEE Audio's subtle yet effective design choices.

Speaking of battery life, the BTC1's secondary battery actually works, allowing it to log a bit over 8 hours of continuous music playback before they tell you the battery is low. If you're not a constant listener, you can feasibly have them on for practically the whole day. 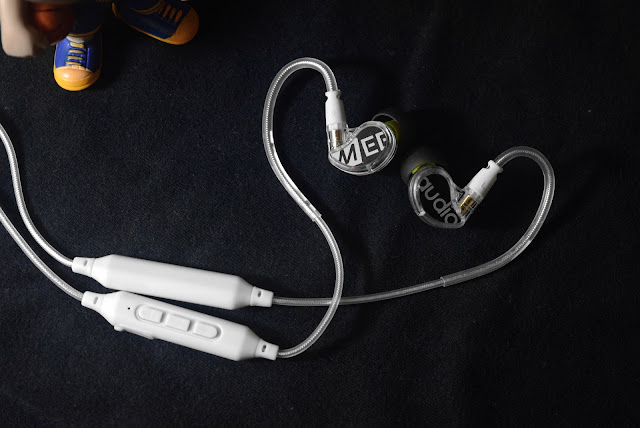 But before you decide on these earphones, there are two things of note that could be a bit of a deal-breaker for the BTC1. First off, there's the sound. Being a Bluetooth adapter, I can't judge their sound as I would a normal earphone, but I did test them on the old and new M6 PRO, as well as the Alpha & Delta AD01. And in all three earphones, I noticed quite a bit of distortion in the bass and treble. It's not noticeable in every song, but when you do hear it, the bass distortion in particular is definitely audible. I mixed and matched different Bluetooth setups to try to fix it, to no avail. As it stands now, it could most likely be an isolated issue, so take it from me and try them out yourself if you can.

And then there's the price. The BTC1 retails for $60 dollars which, interestingly, is more expensive than the M6 PRO itself at $50. Unless you already own an M6 PRO or an earphone with a 2mm DC connector, the price may be daunting. Buyers who want a new wireless M6 PRO will have to shell out $110 in total, so that's definitely something to consider whether you really want to go wireless. 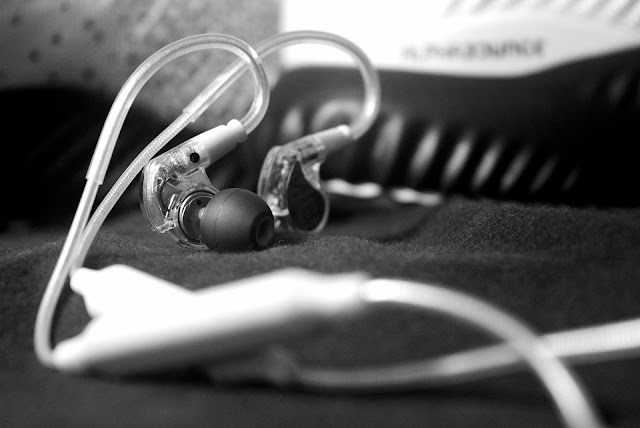 The new M6 PRO is an amazing earphone. Its sound quality alone can compete well above its price point of $50 -- and it's built well enough to last you a couple of years at the very least. Should you wish to go wireless, however, the BTC1 has you covered. Similarly robust and with impressive battery life, it's the perfect complement to the M6 PRO if your phone has left the headphone jack behind. The $60 retail price is something to consider -- although in retrospect, it could very well be the price you have to pay for getting a phone without a headphone jack in the first place. But who am I to judge?

Until next time, this has been thatBeatsguy of DB Headphones; thanks for reading!
Read more…