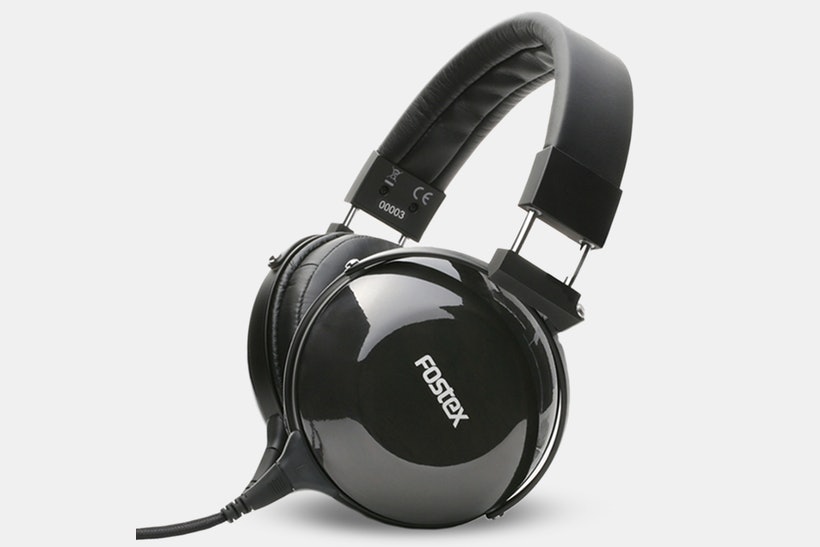 Fostex TR-X00 Ebony- Muscular Sound that demands to be Heard
Pros: Beautiful looking Ebony Gloss Shine
Tremendous Bass with decent Treble to Balance
Fostex Biodynamic Drivers give a speedy "planar-like" response
Cons: Drop has Discontinued These
V shape sound is Fun rather than Reference
I just traded for a set of Fostex Ebony TR-X00 created as one of a series of wooden cup headphones designed in concert with Massdrop now just Drop. For some reason that completely evades me as I sit here listening to these sonic marvels, Drop has no plans for further runs of these phones. It makes no sense to me as they were best-sellers and have made quite a name for themselves as high quality bass intense headphones with a sound far above their price.

I've owned the Mahogany TH-X00 previously (the version without a removable cable) and the lower priced but also excellent Emu-Purpleheart. I also own the TH-900 but it's off getting repaired so I can't do a head to head, though I have a good idea of the differences here.)

The look of the Ebony phones is gorgeous, wood grain just manages to show through the black stain and glossy finish. The sound is muscular with solid bass, that announces its presence but doesn't badly diminish the mid's and treble. So, ok, everything can't be emphasized so there is at least a bit of a V to the signature but luckily the low point of the V does not remove the immediacy of the vocals as happens on many V shaped phones.

Listening to Back in Black and the bass and drums, especially the drums are so amazingly present with a palpable feel almost like Haptic Bass but with no subsonic cheating going on. Seven Nation Army also hits extremely well and shows just how excellent these are for rocks. Played some Velvet Underground from Loaded "Cool it Down" and "Rock and Roll" sound great with the expected focus on Moe Tucker's tribal drumming and Doug Yule's underrated bass playing.

Wanted to try out some jazz so I played Patricia Barber's cover of "Light My Fire". It is an Oasis for phones that have bass emphasis. Her alto voice with the acoustic bass and percussion take you into the music and put you right there. Going on a hunch looking for the bottom part of the "V" shaped sound, I put the vocal-centric Barenaked Ladies "Brian Wilson" and the Ebonies acquitted themselves wonderfully the vocals were front and center and there was no loss or underemphasis I could find. Finally, firing up Massive Attack and Tracey Thorn's Triphop "Better Things", you get amazing subbass, but also extremely clear female vocals.

These were supposed to be more linear than the other wood types in the TH/TRX series but there is definitely extra bass and treble emphasis. Luckily the treble is excellent for detail and I've noticed no sibilance or sharpness.

So, how do these sound compared to the TH-900, the Ebony's bigger 3 times more expensive brother? Using stock pads on both the 900's give a more well-rounded performance and the extra magnet strength (1.5 Tesla in the 900's as opposed to 1 Tesla in the X00's) in concert with an otherwise extremely similar biodynamic driver yields more subtle nuance. Everything is kind of "in your face" with X00's whereas you get more nuance and better soundstage for the substantial additional money. All is not sweeter in the TH900 land as depending on the recording you can run into sibilance or sharpness that isn't present on the X00's.

One thing you don't get, kind of surprisingly given the TH-900's reputation, is more bass. The X00's I've personally listened to Mahogany, Emu Purpleheart, and Ebony give you more bass for your buck. The difference is mostly in the pads which are wider open on the TH900 whereas part of the driver is covered on the TH/TR-X00 phones. This more narrow opening heightens the bass and helps keep the treble from becoming sibilant.

These phones were originally around $350 which represented an incredible value. They've gone up in price since they've been discontinued but are very much worth any price around $500. Much above that and they run into much stiffer competition. These are wonderful, fun headphones that grow addictive to listening to them.
Reactions: ejacobsen and blackdragon87

blackdragon87
enjoy them man. nice review and thanks for the trade once again
Read more…