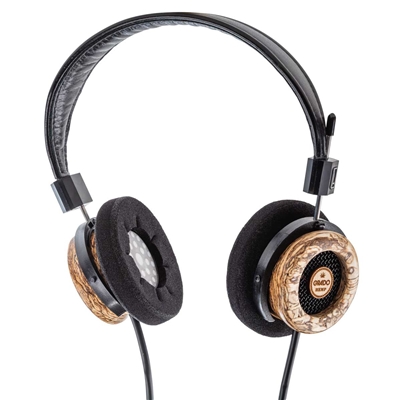 Limited edition Grado released on June 2020. MSRP at time of release was USD 420.00. Constructed with wooden housings made of hemp and maple. At the shop where I demoed it, I thought the Hemp sounded absolutely awful, especially when compared against Grado's other models. I almost didn't buy it at all. However, one of the best features of Grado headphones is that there are a variety of pads, made by both Grado and aftermarket brands. I bought the Hemp hoping that pad rolling would improve the sound. The rest of the review details my pad rolling findings.

With 7 different pads at my disposal, all with their own characteristics, it's time to listen away! I'll list 3 criteria: bass, treble, and full, on a scale of -5 to +5. 0 is ideal for my taste, so the closer to 0, the better, but note that 0 isn't necessarily perfect. Shifting from 0 leans toward too little or too much. Full is my subjective opinion on how thin or how veiled the overall sound is. All tests were done with no EQ and no ASP from my Pro iCAN. (We'll cover EQ results later.)

Yuck. This is so veiled! It amazes me that people prefer this sound signature. I'm reminded of the Audio-Technica M50x, but I think even the M50x was brighter than this. This is the sound signature for people who typically hate Grado. To me, the SR60e sounds better than this.

Even though these pads cover the driver, it's somehow less veiled than the Grado F. There's still a bit of a significant veil, though. However, to me, the Grado S had a more agreeable sound. Treble is still reduced, though it doesn't feel like there's a canyon of missing treble.

Yikes, the foam is so coarse and rough. But with these, the Hemp actually sounds like a Grado. The drivers are still tuned a bit dark, though, and it's no longer a bassy headphone. It sounds like a less resolving RS2e or GH4. Not bad, but they're about to be beaten hard by...

WOW! This was an absolute shocker. Not only is the Geekria L cheaper than the Grado L, it sounds better, and has softer foam! This is the only Geekria pad with two foam densities. But it's not an exact knockoff: the diameter of the Grado L pad is 75mm, while the diameter of the Geekria L is 80mm. It somehow makes a huge difference. This is the best pad for the Hemp unless you are super treble sensitive, and if you own one, you should go on Amazon now and order a pair. Now I'm curious as to how the Geekria L performs on other Grados!

These are interesting in that they have no official equivalent. They have almost the same thickness as the L pads, but are one density, and the tapering is steep, so everything sounds closer. The bass is quite prominent and leaks into the mids, but because the driver is exposed and a little further away, it's not as veiled as the Grado F or S. I would say that if you actually enjoy the Grado F sound signature, try these, as I think the slight bass loss is worth the extra clarity. And it's more comfortable, too!

These are significantly more expensive than the other pads. Well, they are the most comfortable pads of the bunch. Putting these on gives a vast soundstage, but introduces the much-maligned 5k-6k treble spike. This is the EQers pad, as using this pad to EQ will allow a wider range of tweaking than with the other pads.

Unlike the Geekria L, which is a superior version of the Grado L, the Geekria G is rather disappointing. It's only one foam density, and the tapering isn't as steep. The Grado G has 0.3mm of foam from the driver until it starts tapering, while the Geekria G starts at 0.8mm, forming a tunnel. This causes more bass to be forced through, causing this to be just as bassy as the Grado F. Without the soundstage of the Grado G, this feels more like a super-sized Geekria LL. Note that when I briefly owned the Beautiful Audio G pads, they were constructed in a similar manner with a prominent "tunnel", and they sounded similar to this.

EDIT (Revised comparison 2022/10/28): I now own the GH4, and bought it over the RS2x/2e/1x/1e. The GH4 with Grado L pads clearly beat the Hemp in terms of clarity. The GH4 is the ultimate refinement of the traditional Grado house sound, but won't pierce your ears with treble like the non-EQ Statement models, and I bought the GH4 over every other x-series model, including the flagship GS3000x. The GH4 is now discontinued and difficult to find, but I'd take it over the Hemp every time, and it doesn't cost that much more. You can always muffle the brighter GH4 sound with different pads, but you can't make the Hemp as clear as the GH4 without EQ.

This doesn't seem like a fair comparison given that the GS3000e is more than quadruple the cost, but let's do it anyway. I've always maintained that the GS3000e has Grado's most technical driver that's ripe for EQ, as it has actual sub-bass. As using EQ is best with the Grado G, I didn't attempt EQ with any other pad, as other pads trade some comfort for a non-EQ sound tweak. After a few days of tweaking, I could EQ the Hemp to sound shockingly close to the GS3000e. The GS3000e still had significantly better bass extension and visceral impact, and flexes its resolving capability with many instruments at once, but if I had to put a percentage on it, I think my EQ'd Hemp is about 70% as good as my EQ'd GS3000e, and is better than the stock GS3000e. For less than one-quarter the price, that's incredible.

The GS3000e remains my daily driver. But I now understand the hype for the Hemp and why there was so much praise for it. It was squarely targeted at those who wouldn't have otherwise bought Grado. At stock, I think the Hemp sounds terrible, which is a dissenting opinion compared to others who have reviewed it. But with a bit of pad rolling, you can still transform this to sound Grado-ish, but without the aggressive treble. Hopefully this gives you a bit of insight, as most reviewers don't entertain the idea of pad rolling at all. What would've been a scathing review turned out much differently.

Good value, but not a giant killer. Experiment with pads to suit your personal taste.
Last edited: Oct 28, 2022
Reactions: yifuhood, movinIron, Menkau-ra and 9 others

jshaevitz
@Gippy Great review. Can you share the EQ settings you used for the 3000e and Hemp? I'm curious to see what others are doing. Thanks.

X1787X
Treble is less aggressive compared to other grados, but do you know how it compares to other headphones like for example hd600 or sundara?
Read more…