All RP Series headphones deliver this uncolored reproduction and natural clear sound right across the full frequency range with full bass and sparkling highs. But it's the sonic quality at high sound pressure levels which really sets these headphones apart. Whereas lesser headphones struggle at high sound pressure levels, the RP Series have no such problems. The bass is always powerful and distortion-free even at high levels. - Essential when headphone monitoring in noisy environments such as ENG recording, DJ work, and in applications where you need to concentrate totally on your the program material. The Design of the leatherette padded ear cushions enhance the excellent sound isolation and superb deep bass reproduction.
Share:
Facebook Twitter Reddit Pinterest Tumblr WhatsApp Email Link

Pros: Performance to value ratio, modding potential, clarity and speed
Cons: Modding can be time consuming, awkward n-shaped FR without modding, I still encountered what I felt was rolled off highs post-mods.
Introduction:
I first wrote this review around the end of December 2011. Ever since then, the modded T20RP has become my headphone of choice. I've used them pretty much every day since then. I've added some retrospective comments that around coming around 4 1/2 months after my initial impressions. 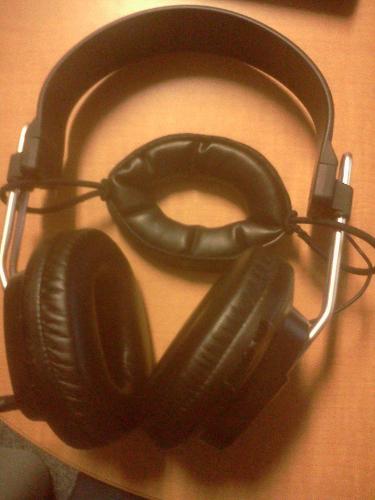 Comfort: The T20RP has a relatively low clamping force with pretty wide pads which fit my ears very snugly. The pads and clamping force didn't bother me, but the headphones were still clamped tight enough to be secure. The headband isn't the most comfortable thing in the world on top of your head, but I don't notice it much. The Fostex headphones, however, were quite heavy -- I suspect they're the heaviest headphone in my collection. Although this didn't both me much, it was certainly different. They're not the most comfortable headphone I've had on my head, but they're certainly comfortable enough have on my head for hours and hours without a break. Overall, they get a four out of five out of me on comfort.

After mods, the comfort improved slightly with the most pushed out pads. They did get warm, however, with the better seal and acoustic foam under the pads (acoustic foam converts sound to heat, not sure how much that added, but I seriously doubt it was noticable). As with many pleather pads, when they get warm, they get sweaty, too. That's just problems with pleather in general, though.

Comfort Retrospective: I've since modded the headband to be auto-sizing. They are not heavy enough to bother me and I don't notice this anymore.  They are quite comfortable, actually. They're the second most comfortable headphone in my collection, losing out to the one pair of headphones that I use with velour and even less clamping force.

Build Quality: The T20RPs felt very ruggedly made. From their replaceable cable to the strong metal build on it to the headband, everything felt like it wasn't going to break and very solid. Pads are quite nice, stitched nicely, and feel comfortable. They're some of the nicer pleather pads I've seen. I felt no need to go out and buy replacement pads from Shure or from an O2 headphone, for what it is worth.

Aesthetically, there T20RP brings nothing special. Although Fostex has their own distinct design with their RP headphones, they're no great shakes. It's a kind of boring design that doesn't catch attention.

T20RP Stock Notes:
[Sorry this notes are unorganized, these were just what I was jotting down for the few hours I was testing them stock.]

Bass seems really rolled off -- it lets you know that it is there, but does not do much with it.
Mid-bass seems very present -- it's above 70-80hz, though, because the bass drum isn't slamming hard enough to showcase that.

Mids sound congested. The mid-bass is definitely leaking into it or something. I'm not sure if it is clear, it just sounds muddied up right now. If you pay close attention, it's definite apparent that the vocals have good microdetails, but it just doesn't sound like it due to the odd tonality of the headphone.
Vocals feel pushed back, as though the singer is singing too far away. I suspect this means that the treble is rolled downward around or before 5khz.

Music sounds unnatural, upper-treble seems very rolled off. Cymbals and those types of percussion do not sizzle like they're supposed to sizzle.
Very mediocre PRaT and percussive attack -- suspected roll down of treble at 2khz or below and roll must continue beyond 4khz. You can tell percussion hits, but it just doesn't attack like it is supposed to (especially apparent in Experimental Film by They Might be Giants's opening)
Sibilance suppressed pretty well -- I think this is a trade off for the rest of the treble suppression, though.
Lack of treble makes the music feel veiled.

It's like listening to music with the top and bottom chopped off -- not very enjoyable. Definitely a n shaped curve. 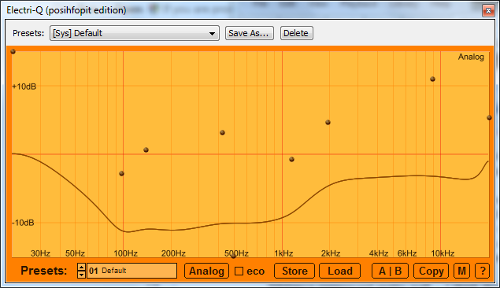 Yes, that's a 10dB equalization at 20hz and 20khz. This is probably a bit too aggressive of an equalization, but it certainly improved the sound by a monster degree. I was declaring the Fostex orthos as my personal end-game headphones before even modding them after this. The vocals no longer sound pushed back and you can appreciate the detail the orthos have in the mids. The bass is deep and rumbles very well -- incredible bass extension for $60 and without modding. The heavy mid-bass/lower-mid hump leakage has been entirely eliminated. If modding can improve on this, I'll be incredibly happy with these headphones. 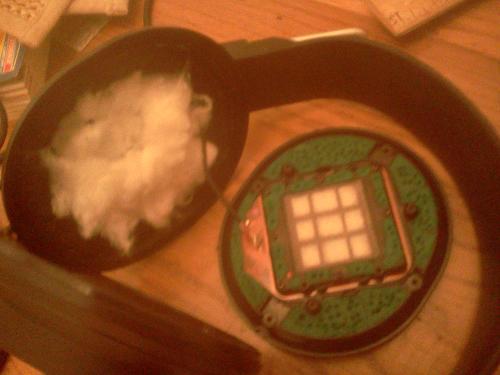 My first impression after I did the first mods was slightly disappointed. I had mass loaded, acoustic foamed, one cotton ball, and 3 bass ports filled. The bass had come out to play, but the highs were massively recessed. I covered half of another bass port and added a cotton ball to each side and that let the highs come back to a level I liked. Sound balance feels very nice, significantly better than stock.

The Lows: If one part of the headphone improved the most, the bass would be the area that improved the most from modding. The bass just absolutely jumped out, especially the sub-bass. Very powerful, deep lows. The mod that made the biggest jump after the first mods was adding acoustic foam under the earpads -- I was able to get a significantly better seal with the more puffed out pads, and I think they trapped sound better due to the acoustic damping foam. Originally, I was going to leave a small complaint about the lack of sub-bass, even after my mods, but the superior seal just made the bass hit much better. I'm guessing that pads like the O2 pads give really good or better seals than this and significantly help the low-end.

Overall, the bass hits nice and hard. Honestly, after the mods, it's almost too much bass for me, borderline bass heavy but not quite there. The extension is good and the T20RPs sound great for electronic music. At the same time, the bass isn't too slow, it keeps up nicely with Zabava by EnichKin's bass line. Clean, powerful, and deep.

My subwoofer mix absolutely rumbles. Trentemoller sounds excellent. The Sleigh Bells' bass slams nicely. The start of Human Rocket by Devo hits hard and jarringly. At the same time, it doesn't threaten the rest of the music by trying to overpower the mids. I love the bass quantity my T20RPs have right now.

Lows Retrospective: It's a bit of an exaggeration to call it "very powerful and deep," I think. In fact, most of this section was just hyperbole because I was recently coming from the notoriously bass-light KRK KNS 6400 and any bass at all seemed like a ton. The bass has a solid presence, but it is far from emphasized with my mods -- think of it as deeply extending bass that can hit and slam, but is still underemphasized without EQ. I've since implemented some modestly aggressive bass equalization (it's not as extreme as the previous equalization settings I posted for the stock T20RP), keying up the sub-bass the most. The bass is still definitely clean and quick, though.


The Mids: Very clean and detailed. The lower mid hump is gone from the sound signature. Vocals no longer feel unnatural or congested. The issue with the singer feeling too far away has been corrected. I haven't done sine wave sweeps, but my gut feeling is that this mod follows the roll-off-after-2khz style of presenting mids and lower treble, because the vocals don't pop out as much. Regardless, the mids on this headphone are the most detailed I've ever heard.

Mids Retrospective: I recently did a comparison against the Grados and KRK KNS-6400s I had on hand. At one point in time, I found the KNS-6400s exceptionally clear, but the T20RP modded has dethroned that title. I'm still a big fan of the T20RP's mids, although I have admittedly lowered them a bit with equalization. I did a comparison against my recently arrived Denon AH-D2000's and I found that my $60 Fostex headphones easily outdid them in terms of mids clarity. There was a complete lack of grain in the Fostex that the Denons had in their mids.

The Highs: After mods, they have sufficient volume in the upper highs (12khz+). It can hear the odd high pitched clicking in Holiday by Swimming with Dolphins (as far as I can tell, this sound is centered at 16khz, but extends in both directions, of course), but it isn't overwhelming. I'm admittedly a guy who likes very bright headphones (I love Grados, bump up the treble on my KRKs, Beyers don't bug me, and I rather aggressive equalize Sennheisers) and these are my most subdued headphones of the bunch -- I wouldn't describe them as dark, but they're certainly not bright by my standards, more laidback.  It's a very pleasant, non-fatiguing sound. Overall, the highs are solid and quick. No complaints.

Percussive attack is greatly improved. It's not perfect, but it's very good. When you start adding more percussive attack through EQing these headphones, you make sacrifices because the treble and vocals start coming forward more and also run the risk of sibilance.

Highs Retrospective: I said no complaints in the review -- this is false. I eventually grew tired of the T20RPs being the most subdued treble headphones in my collection. I've since applied aggressive treble equalization, especially to the upper treble. This is mostly personal preference -- I like very bright, trebly headphones. Pleasant is an okay sound, but I prefer to have emphasized treble.

They still had very rolled off highs after modding, however.

Other Thoughts:
I felt the soundstaging on the T20RP was wider than any of my other closed headphones. It's not quite as wide as a high end open headphone, but it's a very good result for a closed headphone.

Retrospective:
I dropped the overall sound quality down a click and increased the comfort rating to a 5. I can wear these all day without any problems whatsoever. The lack of upper treble very much annoys me and I heavily EQ up the treble to this day. The Fostex T20RPs are PHENOMENONAL in terms of value and clarity in their price bracket, but I found the quality of their bass to be unable to compete with other mid-fi headphones and their treble extension is subpar. That said, they really shouldn't be competing with mid-fi headphones -- those cost 4 to 10 times more than the T20RPs! The fact that they have cleaner mids is astounding.

DoubleDip
Can you share that EQ settings if you still have it?
I just recently ordered a pair and like to try the EQ out before modding the heck out of mine.

SanjiWatsuki
The one I used before modding is in a picture in the review.
Read more…