I first chanced upon the brand on Instagram then contacted them for review units. This review was only made possible by Jedrek's kindness and generosity. Most of my content readers know how I roll - my assessment on IEMs tend to be critical and unforgiving. It is honestly rare for brands to decide to work with me due to my style of writing. 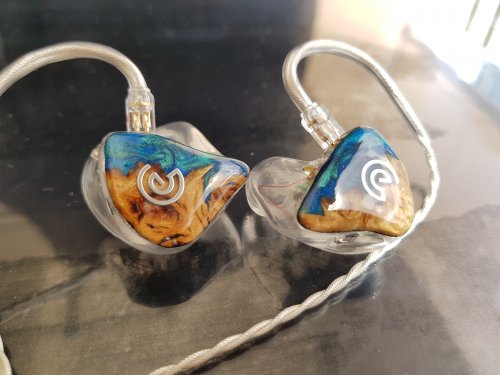 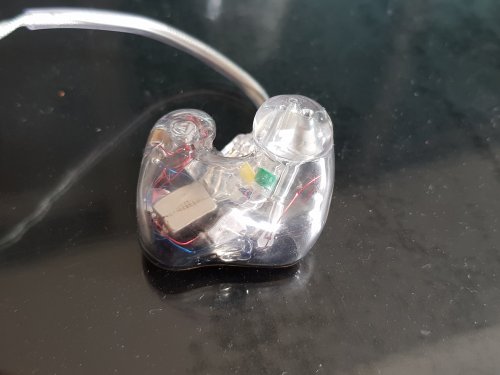 Lets talk about the accessories and overall experience. Craft Ears uses 3D printing for their shells. They also accept .stl files and their shell customization is really affordable. The fit on my CIEMs were very good on the first try (also props to Zeppelin & Co for doing my ear molds!) due to the accuracy of the scanners and printers that Craft uses. However I have to criticize the shells (not the faceplate) here. The clear transparent shells are thin and they exhibit some form of cloudiness. Honestly I asked for them in clear so I could peep the internals and to see what's going on internally. As of the time of this review I recommend that you order opaque shells should you purchase an IEM from Craft Ears. The IEMs are very light and are comfortable. The standard wires used here are plastics1 I think. 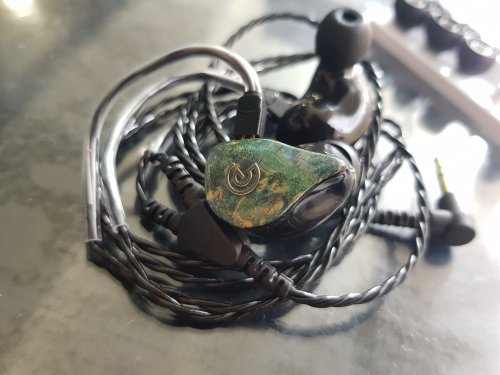 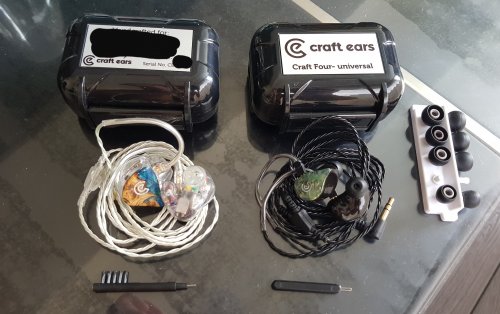 The standard storage case is your typical OEM case. I recommend that you purchase the Pelican case upgrade if you're going to use this on the daily. The standard case is too small. You're going to struggle hard if you use thicker third party cables or have big CIEMs. The UIEMs also came with a full set of final E eartips (5 sizes). Very nice. Both come with cleaning tools but the CIEM has a tool that has a brush.

Sound
Now, onto the sound. The Craft4 is first and foremost designed for stage musicians but I will analyse it from an audiophile perspective.

The CIEMs and UIEMs sound different. I'll describe the CIEM first since Craft - to my knowledge - tunes the CIEM first then tries to match the UIEM. The Craft4 in CIEM aims for a v-shaped sound signature with the recession at the lower mids. I'd say it is brighter than warm/bassy.

Bass
The bass of the Craft4 is well executed, with a focus on the midbass rather than the subbass. Midbass is never overpowering here. It has the speed to back itself up and the definition on toms and snares can be downright amazing on well produced tracks (Paramore's Let The Flames Begin has nice drums at the start). However I'd say the subbass is a tad rolled off relative to its midbass. It punches rather than rumbles. The presence of the upperbass surprisingly isn't bloated here. It lends moderate warmth to the CIEM.

Midrange
The midrange is more focused on the uppermidrange. Due to the lower mid recession, vocals, especially male, can find themselves behind in the mix. Guitars also aren't as forward due to the dip. The lowermidrange does also show some form of veil (not muddy, its a tonal thing) and is more "diffuse" in presentation where the sound feels more spread out and larger rather than being small and focused. I prefer more focused imagery so it does take away some enjoyment from the presentation. If you come from reference studio monitors (which usually are a tad midforward) you're going to notice a midrange dip. The midrange is behind relative to its bass and treble. Typical for v-shaped IEMs.

Treble
Treble is the Craft4's make or break. It can be polarising. Cymbals render themselves thin, forward, clear and aggressive. Yes, they have great treble extension but I do think it can be too thin sounding for some due to the forwardness of treble in the lower treble and upper treble region. They do showcase the metallicness with cymbals well (which CIEM pick up better than UIEM) but it may be too much for some.

Technical Ability
The strongest aspect of the Craft4 is its technical ability. Transients are fast, hard and sport great clarity. Imaging is sharp and precise. Layering and separation is done very well here. Daft Punk's Lose Yourself To Dance has a part where the vocals go "Come on, Come on, Come on..." around your head and the Craft4 images that very well. Stormzy's Sounds of the Skeng is also very well layered here with its synths. Instruments are panned wide and perhaps there is a feeling of depth due to the midrange recession.

CIEM vs UIEM
The UIEM is actually tuned to be warmer to try to emulate the CIEM's bass after the fit. However I'd personally say that the UIEM does end up sounding warmer and bassier and its bass isn't as tight. The treble on the UIEM also differs - to my ears the CIEM is quite boosted in upper treble whereas the UIEM has less presence in that region. I actually prefer the treble in the UIEM as the CIEM can sometimes be harsh sounding with the amount of energy it has way above 10khz. The UIEM's treble does sound more even to my ears and it sounds "colder" compared to the CIEM with its cymbal tonality.

I also found the CIEM to be rather harsh with its upper treble for the first and second day after I received it. Seems like I got accustomed to it and the harshness is alleviated. I let my friends try the UIEM and CIEM and they reported no such harshness issues. Seems like its a me-thing. Would also like to highlight that the CIEM images better with a more encompassing soundstage/presentation, where the UIEM sounds more constrained with its dimensions and doesn't image quite as well.

Conclusion
As you can probably guess that from the majority of the review, I do not enjoy the tonality of the Craft4. However it objectively does perform well with its technical aspects like imaging and layering as well as its hard, fast and excellent transient response. From an audiophile perspective I do want a more reference-level tonality since I place a lot of emphasis on tonal balance. I genuinely think Craft Ears has potential here. They've the fundamentals down with its technical ability & just need to target a more reference tone to match my preferences.