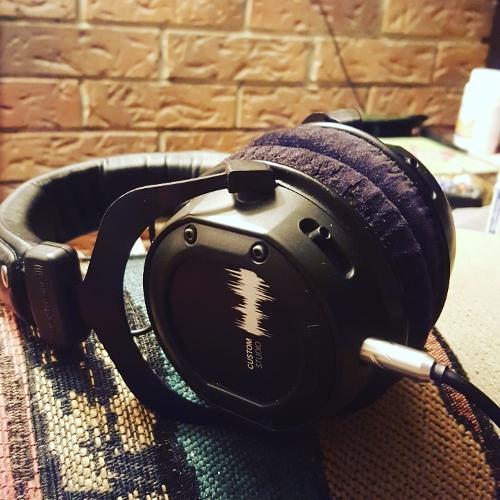 For value, they're probably one of the best headphones I can generally think of. They retail for around $300 CAD and out-perform many headphones for the price. I'd compare them to headphones of at least $100 to $200 more expensive. After an hour plus listening session against the HiFiMAN HE-400i, I still preferred the Custom Studio.

Detail is plentiful and full of energy. Very vibrant treble, lack of harshness or painful sibilance. Bass is full, well extended, and understandable; powerful. The mids are a little recessed. Still quite decent, but they don't have as much soul and presence as headphones higher up in price. Tonality is overall fairly balanced out - the V-shape isn't prominent by any means. Adjustable bass feature is nice, but unnecessary.

The soundstage is fairly wide and open, considering the closed-back design. Could do with a little more depth. Imaging, otherwise, is fairly easy to locate and interpret. Clarity is everywhere, but most detailed in higher frequencies; resolution exceeds the expectations for price point.

The build is tank-like. I've dropped them plenty, and nothing is wrong other than a few scratches. Easy to replace parts in event of worst case scenario. If I could change something it would be the clamping pressure. The velour pads are super comfy, but somewhat offset by how the band crushes your head. Should also mention that this particular set of cans gets hot easily in warmer weather. You might want to avoid taking this on long jogs.

​Overall, this is a quality piece of hardware that performs extremely well for the dollar. The design is top-notch, and brings no concern of durability or design issues. Of the issues I can find, they aren't major. If the mids, soundstage depth, and resolution all improved a little bit - and I don't mean a great much - I'd be ranking up this headphone much closer to the level of K701/2 and HD 600/650 in performance.
Versatile, reliable - the Beyerdynamic Custom Studio is a king of quality, ace of value, and jack of all trades.

​There's no gamble buying this one.
Reactions: rocksteady65, WitzyZed, An_Ape_named_Joe and 2 others
Pros: Decent detail, neutrality, they're quite bright I'd say, they don't really care what source you plug them in, bass adjustment mechanism, comfortable.
Cons: Velour pads out of the box get dirty quickly, medium impedance make them less suitable for use with some portable devices.
Let me put it straight. before buying these I have never heard any decent headphones. What I wanted was neutral sound (because you never know how much they will color your music) and some changeable parts (because you never know how long they will last). I also appreciated bass adjustment since many people are usually complaining about lack of bass on analytically-sounded phones. Oh, and yes, I didn't want to sell my computer to buy them, you know. So I found Beyerdynamic Custom Studio.

I listen mainly to black, experimental metal and some asian folk music. Don't laugh. And as I said already I had nothing really to compare with, speaking about adequate headphones, but here's the thing: I immediately heard every single details on Blu-ray PCM-stereo track, it was 16 or 24/48 I guess. My entire lossless 16/44.1 library sounds fantastically.
Here you have quite detailed highs, amazing vocals and decent bass. Overall I would call headphones dynamic and brightly sounding. They can't provide even as much bass as your average musical headphones, though, but here you go. They're studio things... Again, it's always better to compare stuff with something before buying, but I'm sure you will be satisfied for 100% if you nee entry level neutral headphones and you don't know how much bass you would need. Because sonically I found totally nothing to complain about. I'm pretty sure people working in home studios will like these as well.
I tried these with Fiio E10k, Creative SoundBlaster E1, iPhone 6 and iPad Air. Guess what? Fiio is the best obviously. The scene is bigger and thing are quite a bit more separated but still I can't say listening to my 16/44.2 ALACs through iPhone 6 is horrible. It's rather good. They gently handled every single source I've put them through. Now that's something you're not expecting from studio headphones usually.
Anyway I think they are capable of much more. Just like any good phones. Will definitely check them out with some Schiit!
Bass adjustment has four positions. First has almost no bass at all, last one somewhat goes out of the control. Maybe first position can be somehow suitable for monitoring, but not for music, I guess. But still you have these second and third positions which sound brilliant. You just need to choose one. Or adjust bass for you mode! Who knows.

They're instantly super comfy, at least for a few month. After that period of intense use I ended up with drivers touching my ears. It happened again when I changed pads. It's just ear cups being not to deep. So when pads become shallower drivers are coming closer to your ears and rest depends of their size. Otherwise they are quite roomy and quite comfy. You can't fold them, still headband made of rugged spring steel so it's amazingly flexible. No problems disassembling thing, replacing pads, cleaning stuff.
You can customize headphones by changing side plated that you buy on Beyer's site or from resellers. There's quite wide range of them. They're made of aluminum in Germany as well but quite expansive. Still, you can make your own probably. You can change headband cushion as well. There're few color variants made of synthetic leather.
Interesting stuff goes on with ear pads. When you decide to change them know this: they have the same pads as DT 770s do (EDT 770VB - black or EDT 770V - light). Not DT 990 (EDT 990VB). They're just black out of the box. When I first decided to buy new pair not a single reseller had them so they argued with me to buy EDT 990VB claiming that they're the same. It turned out they're not. Custom Studios have generally closed design so they have same pads as closed design 770s do. Now you can imagine 990s have breathing and "open" pads. So I returned them and bought EDT 770V (light). Now they look as DT 770 Pro. You can call it customization as well.
Every single part except drivers themselves I guess is interchangeable with Custom One Pro.
I have few things I don't quite like here though. First is that plastic parts serving as connectors of cup holders and headband are wearing off over time and don't hold position properly. But headphones are quite cheap, so you can deal with that one. Another thing is that cable connector is proprietary. Yeah, you can change it, but only for cable from Custom On Pro or for the same one. You can get straight one or coiled.

If you have collection of more or less neutral headphones intended for music and (or) home studio use that are priced in midrange, you should definitely have these in there, just next to your ATH-M50x. If you just need first one, go buy them.
Reactions: rocksteady65, WitzyZed, trellus and 1 other person
Pros: over all sound quality and signature
Cons: Side plates
Bought this pair of headset for a friend as a present and decided to keep it for myself after a long explanation by him how good the sound is!
he is a sound engineer and those were the main reasons :

Customize Your Sound
The Custom Studio headphones from Beyendynamic come with a Custom Sound Slider that allows you to refine the output of the headphones according to your personal taste. It comes with four different profiles to choose from and can deliver from analytical music to heavy bass! If you are a fan of hard-hitting bass, then the Custom Studio are perfect for you as no other headphones in the market can deliver cleaner and harder bass than these professional-grade headphones.

Comfortable to Wear
As good as they sound; the Custom Studio Headphones are incredibly comfortable to wear. They feature soft and replaceable ear pads made from velour and a one of the best headbands available to ensure your head and ears do not experience any strain even if you wear them all day long. The movable yokes and adjustable spring steel headband provides a perfect fit for every head size.

Work perfect to me

Reactions: WitzyZed
Pros: Great detail, rich bass, balanced sound
Cons: coiled cable
Bought this headphones for ~180$ and i'm very impressed with the sound. They are very easy to drive with my Xonar DG and even my smartphone allow me to listen to them with satisfying volume. Before them a had Sennheiser HD558 and always thought of their sound as detailed and airy but lacking bass for my taste. So i was worried that this beyer's will have muffled mids and treble cause of reviews of their cousin custom one pro. But Custom studio really impressed me with the level of detail and really clear treble. After listening to them for some time when i tried HD558 i was amazed how dark and muddy their sound actually is.
Overall bass response, level of detail and for my amazement even soundstage is much better than on HD558. Great headphones for 180$ (dunno why in the US their price is much higher).
Reactions: WitzyZed
Pros: Looks, comfort, sound, cable
Cons: Side plates expensive
Considering the DT770 or other closed cans? Take a look at these, I'm glad I did. I scored them refurbished, but would have gladly paid full price in retrospect.

Edit: In my short journey of "premium" headphones these are my fav.
Had the HD600 before and these are adequate for me.
Reactions: WitzyZed