After contacting them, Ambient Acoustics kindly and graciously lent me 3 pairs of demos for 8 weeks. I would like to thank them for their trust.

Ambient Acoustics (AA) is a Ukrainian company based in Kiev and specialized in custom, hearing protection, hearing aids and communication systems. Founded in 2009, AA offers today a wide range of solutions ( about ten models) targeting more particularly the professional segment but also the audiophile one.

I personally discovered AA through the AM7 LAM-C more than 2 years ago. Despite a very average fit (custom too big for me), it aroused my curiosity and made me want to buy and test the AM7 LAM-U, the universal version. And I wasn't disappointed because the quality was there.

So I had on loan the AM5LE, the MAD16 and the MAD24, which are models composed exclusively of Balanced Armatures and available in custom and recently in universal. 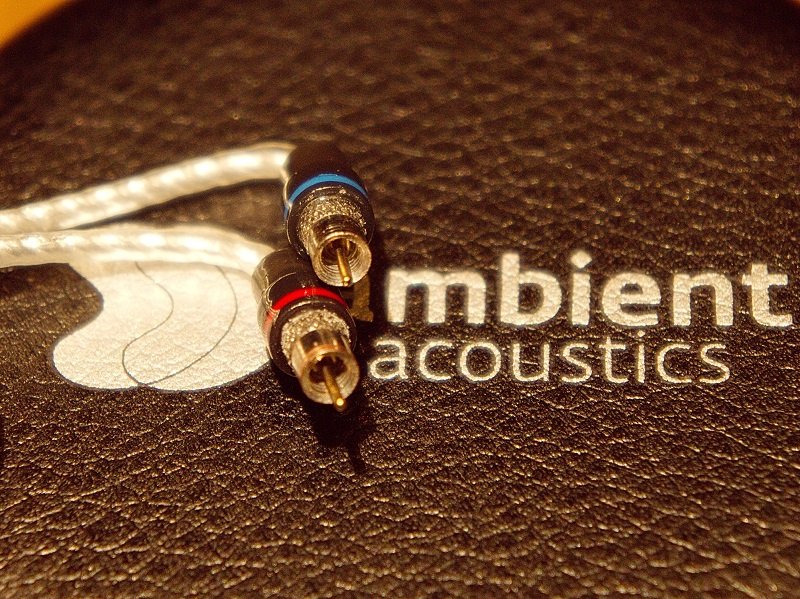 
MAD16 and MAD24 also offer and share several innovations developed by AA, which pays particular attention to the impedance and phase of its headphones. It seems interesting to me to present them to you here

MAD -> Main Audio Destination
Unique approach to designing multi-driver headphones to solve phase matching problems. Frequency band separation is achieved without the use of electrical filters, but with the natural slope of the FR of each BA, using different acoustic loads from the oscillating circuit, the design of the bores and the ANOR acoustic notch filters

ANOR -> Acoustic Notch Resonator
Unique acoustic notch filter that acts as an electrical filter and "cuts off" the sibilant zone over which the natural resonance of the ear canal occurs (after the second bend), thus compensating for this gain

SSD -> Solid Shell Design
BA and components are fixed to the shell, without air cavities. This eliminates all unwanted parasitic resonances inside the shells that can affect the sound of the earphones

SOER -> Sound Occlusion Effect Reduction
It's a sound pressure compensation technology. It reduces the occlusion effect of the closed volume of the ear canal. This technology has the advantages of "open loudspeakers" but also increase sound insulation by up to 20dB without losing bass depth 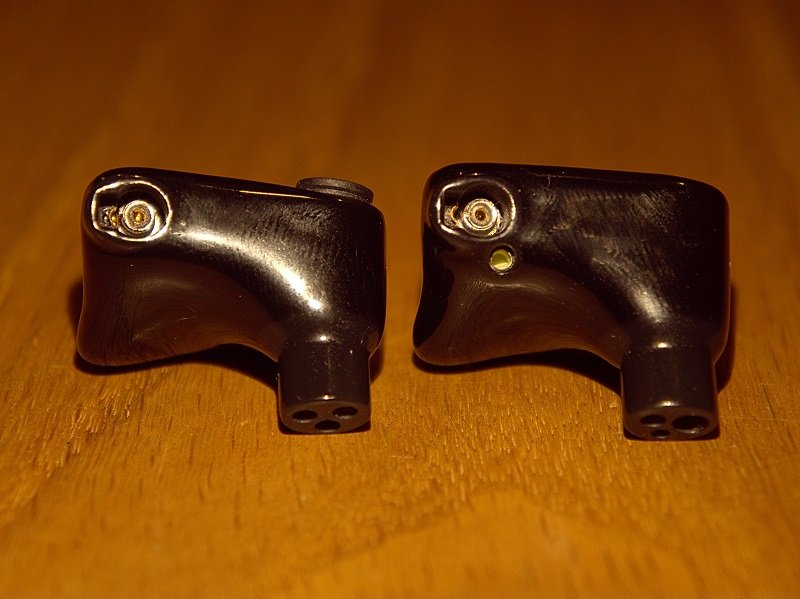 Here are the measurements found on the Ambient Acoustics website, allowing us to compare the frequency responses of the 3 models that interest us today.

It is also instructive to take a look at the phase and impedance curves for MAD16 and MAD24 (not provided for AM5LE), which play a large role in restitution.

This linearity of both impedance and phase makes it possible, according to AA, to almost completely eliminate dependence on the reading source and associated changes in frequency response.

What about the sound in all this? Generally speaking, there's a real Ambient Acoustics touch. I find on the 3 models what I liked with the AM7 LAM-U, namely a very natural midrange and a consistency in the transition of the registers.
During the loan, I listened the in-ears on my WM1Z K Mod Ultimate 3.02, and I was able to compare the AA with the Jomo Audio Trinity SS, the Itsfit Fusion and the IMR Rah (no comparison with the latter which are still in the background on all levels, except the stage and the musicality).

The AM5LE signature is rather balanced, with treble that is well present but sags after 7500Hz.
The MAD16 signature is both the lowest and clearest, with a peak at 12000Hz that brings in some space.
The MAD24 signature is very well balanced, with a solid foundation, a delicate and slightly emphasized midrange, and fine, airy highs. 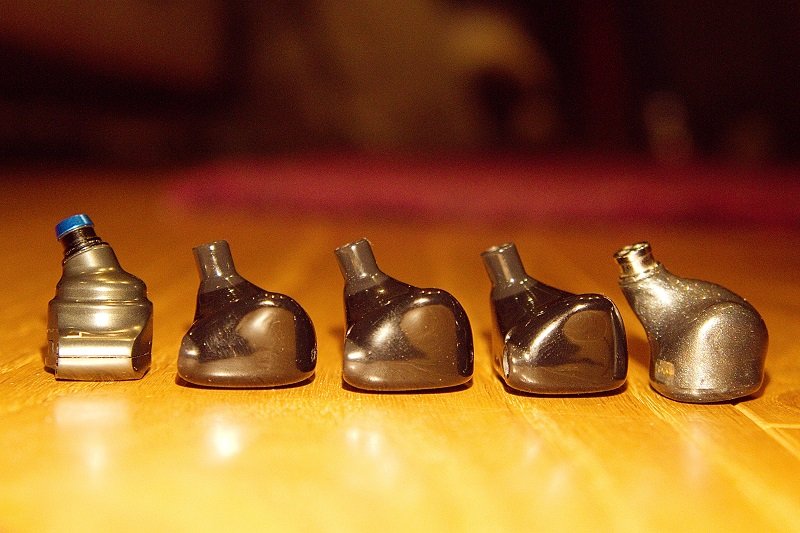 On the 3 models, you can hear and sweep confirms it, what you can see on the curves, and that corresponds to my expectations.
The emphasis is put on the 25 to 80 Hz zone, without reinforcement of the 80 to 150 Hz region which can sometimes bring a too boomy side to the restitution. As a result, bass has nice impacts, nice subs well audible on the 3 samples, and is rather fast.

On AM5LE, they are dense and deep, well felt when listening, they are nevertheless contained. But there is a lack of texture and resolution compared to the MAD.

On MAD16, you can take a Thor's hammer blow behind your head. It's telluric but without ever masking the mids. It hits really strong, louder for example than the Jomo Trinity. And both texture and resolution are excellent.

With the MAD24, we are quite close to the MAD16 but with more restraint and finesse, and the articulation of the impacts seems even better. In terms of quantity, it's equivalent to what Trinity offers but faster and a little less natural. The Fusion bring less energy in this register, less subs, less meat on the bone.

Of the 3 models, it is the MAD24 mids that have the best balance for me. The Low-Mids (250 to 500 Hz) is neither too thin, nor too forward compared to the basses and the rest of the midrange. It blossoms very freely and gives thickness and foundation to the register. The Mids and High-Mids (500-2000 and 2000-4000 Hz) is linear from 500 to 1000 before rising just right up to 1500Hz and flattening out to 4000 Hz. The harmonics are in fact well present and this results in giving brightness to the voices, grain and intensity.
The Jomo Trinity in comparison are more hollowed out between 250 and 1000Hz which gives more distant and less thick voices, timbres a little less accurate. And at the same time, the boost between 1000 and 4000 Hz is higher, which gives an opening, a greater airing (especially on female voices), and a little more brightness.

MAD16 are thicker in the Low-Mids compared to the MAD24, with warmer male voices that seem a little less defined. The Mids and High-Mids are clearly softer and more matt, probably due to the dip around 900 Hz and especially to the lack of dB deviation between 900 and the plateau reached at 1200 Hz, which extends almost linearly up to 4000 Hz. As a result, the reproduction of female voices is less intense. The resolution is also a tad behind, which is probably linked to the abscense of 8 BA dedicated to the High-Mids.

Finally AM5LE are closer to the MAD24 in the presentation. The Low-Midrange and Midrange have almost the same balance, but the High-Midrange is much more discreet. This gives a more matte or even a little dark, moist, and almost simplified appearance to the High-Mids. We also notice that technical skills are less solid. But the result remains very pleasant to listen to. 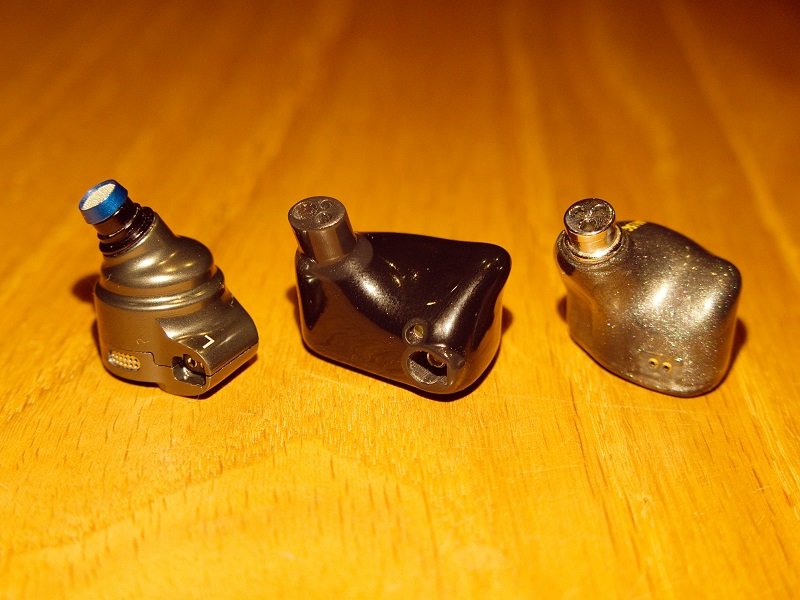 AM5LE have a treble that fades quite quickly after 7000 Hz. However, due to the contained deviation of the frequency response between 25 and 7500 Hz, the treble is the most present of the 3 in the stridency zone and sometimes on the borderline of what i can stand. They also lack a little finesse.

MAD16 is the pair with the clearest highs. That is to say that in spite of very present bass, the peaks at 5.5 and 12 KHz bring a nice presence, a very nice extension and particularly highlight this register. The level of detail is excellent.

On the MAD24, the first word that comes to describe the treble is sweetness. This can be explained by the emphasis on the high-midrange and the difference in frequency response level between 5 KHz and the 2 peaks at 7.5 and 12 KHz. The extension remains good and here too it allows to bring air to the reproduction, and a very pleasant full and vaporous side at the same time.
Trinity and Fusion trebles are less extensive than MAD24 or 16. But their highs may seem more natural, probably due to the technologies used. The level of detail seems equivalent to me, and resolution / definition too.

AM5LE have a relatively homogeneous soundstage. Not excessively wide, it is quite deep and has a pleasant pitch. The stage is slightly projected out of the head with a slightly distant stage that develops in an arc of a circle.

The soundstage of the MAD16 seems wider, a little deeper but perhaps a little less high. The scene is not projected more out of the head but the voices are closer to us. A fuller crescent moon overall.

Finally, MAD24 soundstage is wider than that of MAD16, with a depth that seems to me to be slightly higher too, and a height comparable to that of AM5LE. The voices are a bit further back from the MAD16s but seem closer to me than the voices of the AMLEs.
In comparison, I have the feeling that the Fusion do better in width and are equivalent in depth and pitch. The Trinity's are less wide but just as high, and perhaps a little deeper. 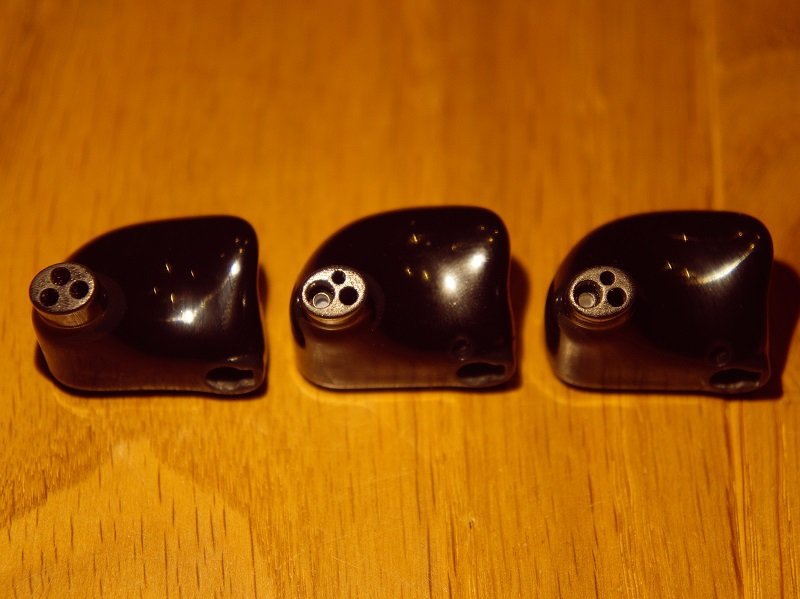 Both MAD16 and MAD24 clearly stand out from the AM5LEs on the following criteria, which is not illogical given their respective prices (x2.77 MAD16, x3.88 MAD24).

In terms of resolution, there is no real match. MAD24 are excellent and outperform their 2 peers, especially in the high-mids, without reaching the level of the Trinity SS, but superior to what Itsfit Fusion offers. MAD16 are still in the high end of the market, comparable to the Fusion. The AM5LEs are good but below what the Fusion offers.

On the separation side, MAD16 and MAD24 are neck and neck, and clearly in the very top end, close if not equivalent to the Trinity SS, slightly above the Fusion. The AM5LEs are clearly set back, and not as good as the Fusion.

Definition is very correct on the AM5LE, but still seems to me inferior to that of the Fusion. It's excellent on the MAD16 and 24 with a small advantage to the 24, again in the upper mids. You can hear everything, especially the inflections of the voices. Once again for the MAD24 it's quite comparable to what the Trinity SS offers, a bit behind for MAD16.

Finally transparency seems to me slightly higher on the MAD16 compared to the MAD24 because of their clearer signature on the mids and highs. We are between the Fusion and the Trinity SS. Once again the AM5LEs are a little bit behind.

The nozzles of the 3 universals are big but I got a very good fit with the tips provided by AA, quite close to the Symbio W Peel Single Flange but with narrower nozzle tips.
However, I clearly preferred the sound obtained with tips having a wider bore, like the Whirlwind or Spiral Dots, which brings aeration to the restitution. Nevertheless, after 1 hour in the ears, either with the stock tips or the 2 previous pairs, I felt pain on the upper part of the antelix, probably caused by the rather bulky shells.
I was able to correct this by adding a small o-ring at the base of the nozzle, in order to move the shell a bit away from my ear. In doing so, I also switched to larger Whirlwind tips to ensure more occlusion at the entrance of the canal.

Even if I only listened to 3 models among Ambient Acoustics line-up so far, the feeling that emerges is that the technical innovations used on the MAD bring a real plus to the reproduction. The coherence and the naturalness are there.

AM5LE are very homogeneous and musical, with beautiful bass and good overall dynamics, but offer a restitution not technical enough and clean enough to my eyes. A model more intended for stage monitoring than for audiophiles.

MAD16 are clear while offering incredible bass. The technical level is very good and the dynamics rather soft. A good choice for the ears rather turned towards analytical restitutions.

MAD24 is a mix of the two previous models. The musicality is sublimated by incredible technical qualities and beautiful dynamics. They remind me a lot of the Anole VX on these points. And the midrange is of a beauty that never ceased to surprise me throughout the loan. In a word, bewitching!