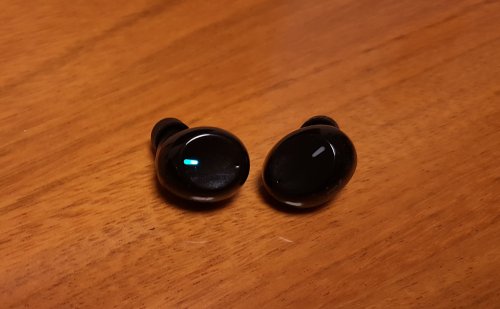 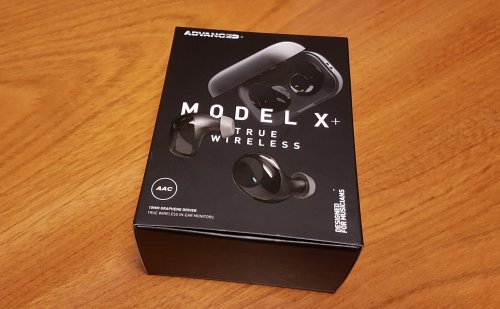 Credits to the ADV. team for providing the Model X+ for review. 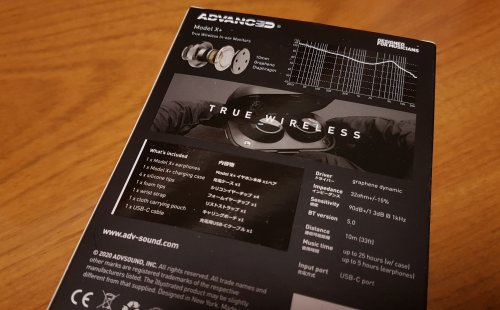 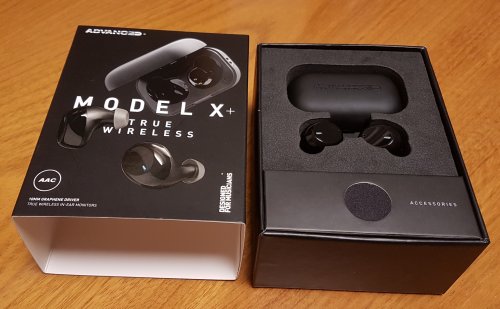 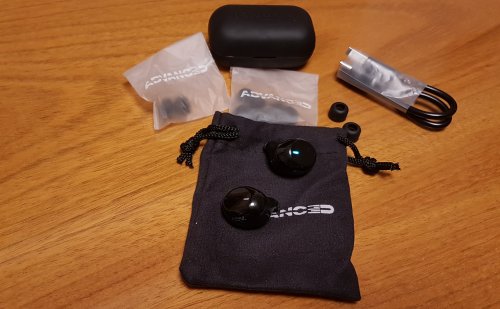 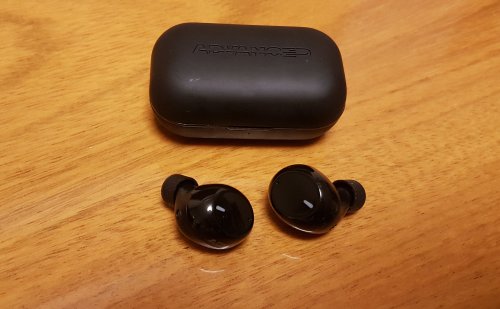 ​
Being a true-wireless pair the Model X+ is well-shaped considered the dynamic graphene driver of 10mm and having all the wireless tech inside, battery, antenna, etc. Even so, the earpieces are very light made of all plastic which feels of good quality. The shape and color are nice too, shiny black on the outer side and a more matte finish for the inner side. Moreover, it features good ergonomics in spite of the larger shells with good nozzle angle, length and about standard width. Ear tips rolling is fine and actually highly recommended for the Model X; personally I’ve settled with the Spinfit CP360 for a best seal. Isolation is quite good and the earphones sit fixed, rarely needing to be adjusted. The only disadvantage on the Model X+ is the lack of IPX rating, no water or sweat resistance, so take that in consideration if using during rainy days or for active use. 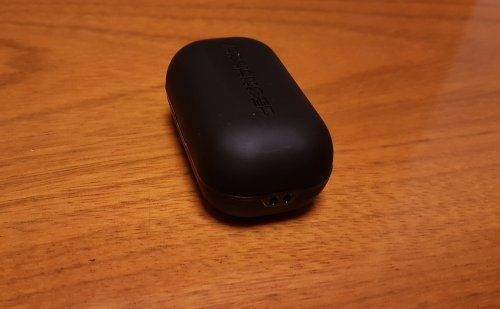 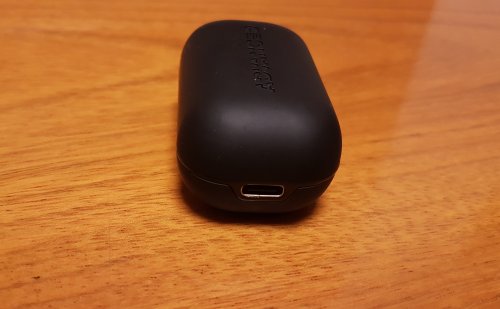 ​
The charging storage case is compact and very light with a rubber-like coating. Charging port has been updated to the modern Type-C USB and also features wireless Qi charging (not tried yet). It may not be as tough as metal charging cases found with other TW earphones, but then it is way much comfortable to carry around. There is very small LED light outside to indicate the case battery level. The case will store the earphones with any of the included tips installed but may not fit other tips (e.g., SpinFit). 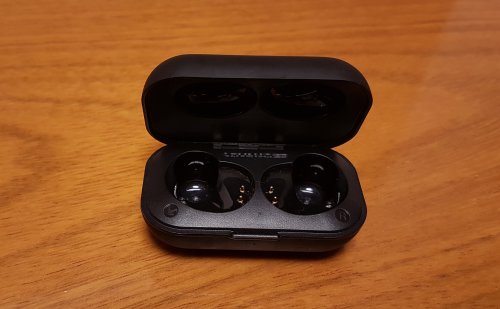 ​
There are integrated touch controls on both sides for usual playback functions as play, pause and track skipping, phone calls, and also volume control and voice assistance with the corresponding app. It is also possible to manually power off the earphones - alternatively, they will turn off after a few minutes of being paused. The touch section has a concave shape what makes easier, more natural to operate over other touch buttons on other true-wireless models, and also more comfortable than those having a large physical button that needs to be pressed towards the ear. 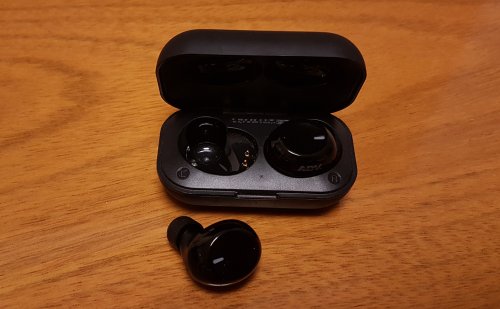 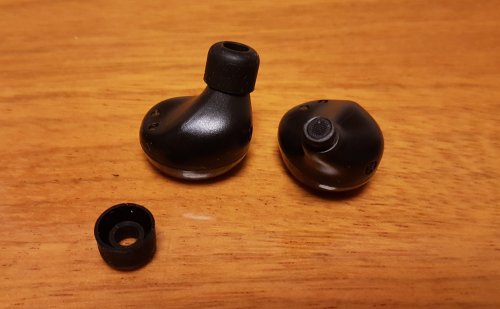 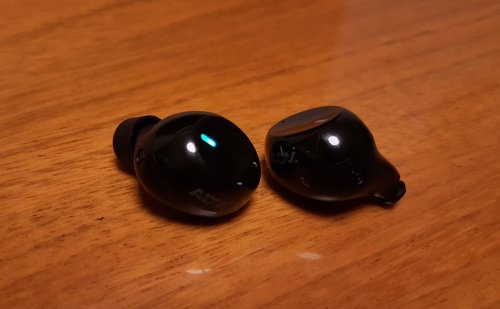 Battery time is about what could be considered now a standard or bit above. The earphones hold around 5~6 hours of playback, and the case will add a few cycles more. The case is compact to carry anyway and the earphones charge fast enough.

Bluetooth version is of 5.0, now a usual standard for true-wireless sets. Pairing is simple and next connections are fast. The wireless connectivity is very stable, rarely drops or pause of transmission. No interference or noise on the audio signal even on crowded areas, and no hiss either. Supported codecs are limited to only SBC and AAC; no AptX unfortunately.

Right out of the box, I immediately found the sound on the Model X+ to be positive. However, there is just one important condition – the right ear tips. Unlike other true-wireless sets where the included tips are decent to good, the ones on the Model X+ are not favorable at all. Probably due the shape and/or length of the tips as they don’t provide a decent fit and seal. Moreover, they tend to muffle the sound quality. I had to switch to the Spinfit CP360 which are made specifically for TWS sets, but other tips work as well on the Model X, as long as they don’t have a too wide core. Sony tips (usually known as ‘hybrid’ tips) work just fine and improve the sound as well.

My preferences when trying a wireless (or true-wireless) set may vary from the usual wired in-ear earphones, and partly due the form factor and portability, where the total balance and accuracy can be traded for a more fun and easy going sound. It is not to say the Model X is lacking in detail or overall balance, but it is more about being fun to listen, forgetting about cables and a more dedicated audio source, and actually, the Model X has become one of the most wireless sets I’ve been using along another favorite pair, the Jays m-Seven.

Overall, the Model X+ presents a kind of v-shaped signature; not a sharp curve but you definitely get a warm tuning with a stronger emphasis on the low-end and enough energy on the highs. It is a bit dark sounding but nothing dull or off sounding. The bass is more dominating, impactful and full. Texture is thick, missing in some layering but then it is fun and not too overwhelming. Sub-bass has strong presence, though the mid-bass lift is even more pronounced. Not much extension, which can be addressed to being wireless and speed is about average. Big bass quantities over total precision and control, but still very enjoyable to listen.

The bass power mixes into the midrange, not overshadowing rather adding the thicker and warmer texture, mainly on the lower mid. The midrange is actually less distant then expected putting a relatively good balance. Fairly smooth and forgiving; there may not be too much air, neither it focus into tiny micro details but it has a very good level of clarity. Vocals sound very pleasant too, a bit more forward. Upper midrange has good presence as well giving extra texture to upper instruments.

Treble is laid-back, more forward than the midrange but still behind the bass, so while it doesn’t give a dark signature is not too bright either. It is mostly smooth, limited in upper extension, but there is still more than enough energy when called for. Sibilance nor harshness are present, at least not at acceptable listening volumes.

Build quality is practically the same on both, very good being all plastic as true-wireless sets. The Model X, however, offers much better ergonomics and higher isolation. Battery time is twice over the Liberty+ but still no improvements over Bluetooth codecs.

As for sound, the Liberty+ presents a lively v-shaped sound with a bit less mid-bass power and more even and balanced sub to mid-bass response. It is less warm with the midrange cleaner, thinner but similarly forward. Treble is brighter on the Liberty+ having detail being more obvious and also less forgiving. Soundstage is similar, about average on both, though the Liberty+ is airier thanks to the treble response. 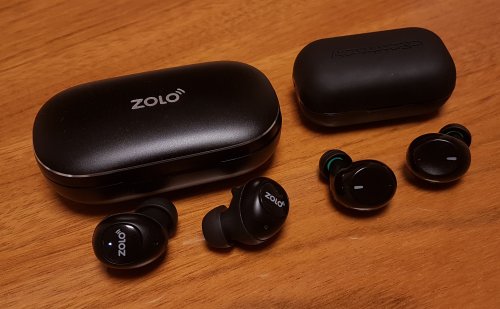 The m-Seven is easily one of my favorite earphones when it gets to wireless gears. Almost perfect ergonomics, good isolation and no need to go ear tip rolling to find a best sound. Battery is still among the best, around 9 hours and features IPX rates for sport use or weather conditions. That said, the Model X+ turns to be the closest rival of the m-Seven in many aspects, good comfortable fit, similar touch controls (and easier to operate on the Model X), compact and lightweight charging case. The m-Seven has some issues with BT connectivity, and that’s where the ADV Model X has a clear win, despite holding less playback time.

In terms of sound, these two sound more similar than different, despite the specified different drivers’ sizes (6mm vs. 10mm) and different impedance. Powerful bass with an overall dark yet very fun signature, good level of detail just being more laid-back. The m-Seven has still greater bass strength but it is also larger and with less mid-bass bloat. Midrange is less forward while still very warm, while the Model X is nicer with vocals music genres. Treble extension is about the same, though the Model X is more balanced and holds more energy, making the m-Seven the darkest sounding among all the True-wireless I had compared. m-Seven still wins in soundstage, especially when paired with a compact player as the Shanling Q1. The Model X+ is a bit thicker sounding and a bit less wide than the m-Seven, but it pays off having a bit more balanced presentation. 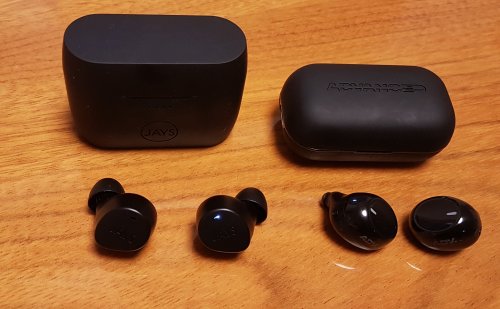 The EW1 from Jade Audio/FiiO is the most affordable of the bunch, and only one supporting AptX yet. It is more compact with a more capsule like form factor, similar battery time as the Model X+ but still features IPX rate. It is comfortable but the Model X+ fit is more secure and snugly around the ears and has higher isolation.

For what sound quality goes, the EW1 has a warmer and thicker sound, more bloated and dominating mid-bass that overshadows the midrange. Vocals are sweeter on the EW1 but is less airy and resolving. The Model X+ brings a bit more treble energy and overall better balance with a more convincing soundstage for what true-wireless can present. 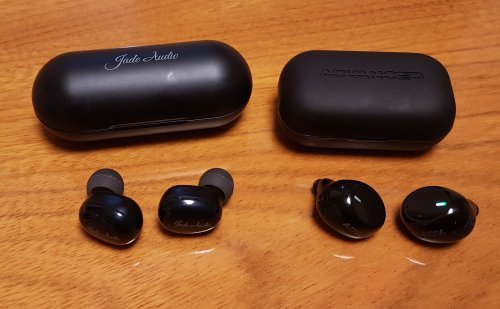