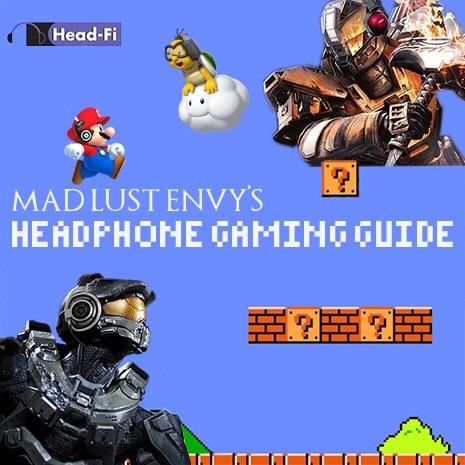 What about multi-driver "true surround sound" headphones? Aren't they better?

No. Multi-driver headphones make use of tiny drivers with inferior performance to larger stereo (dual driver) headphones. A better route is a good pair of stereo headphones with a good virtual surround DSP.​

Do I need an amp?

That depends on your headphone. All headphones will benefit from an amp, but some benefit more. Those are usually higher ohm OR lower sensitivity headphones.​

Will headphone X be a huge improvement for competitive gaming over the AD700?

Probably not. HD800s or SR009 are probably the very best headphones, but nothing is going to be that much of an improvement for competitive gaming over the AD700s.

You're NOT going to keep getting competitive improvements as you go up in price. The main improvements your going to get are a more immersive sound (fuller weightier sound, better bass). Sometimes a more immersive sound counteracts a competitive focused sound though. Part of the reason the AD700 works so well for soundwhoring is because it sounds bright and bass light (counteracts immersion though).


What traits make for a good competitive gaming headphone?

A non-bassy heavy signature, emphasis on mids and highs to bring out details like footsteps, and a large and accurate sounding soundstage...​

What traits make for a good immersive gaming headphone?

Dat Bass...​
What' the difference between "Dolby Digital" and "Dolby Headphone"?

Dolby Digital surround and Dolby Headphone surround are NOT the same thing.

Dolby Headphone is a virtual surround sound DSP for headphones which takes a Dolby Digital 5.1 channel signal and downmixes and processes into a special 2 channel stereo signal that any headphone can use. Since it's just a 2 channel stereo signal, any 3.5mm jack will output it and it will work with any regular stereo headphone (although some work better than others). Even though it's only a stereo signal, it still sounds like surround sound when used with headphones because the Dolby Headphone DSP adds head related transfer function cues to the signal, which fool the brain into the hearing the same surround sound that was in the original 5.1 signal.​

My PC has optical/toslink out. Will I be able to plug in a device like the Astro Mixamp or Ear Force DSS?

Maybe. It depends on whether your computer's sound card is capable of encoding games into Dolby Digital and outputting that signal through optical.​

Can I connect a Mixamp to an external DAC in the audio chain? Can I "chain" DACs together?

NO. You only convert the signal from digital to analog ONE time, so the first device in the chain that gives you an analog signal is your DAC and will be the only DAC in the chain.​

Should I get a mixamp if I'm gaming on PC?

No, probably not. Devices like the Mixamp are mainly recommended for consoles. For PC's a better solution is an internal soundcard.​