Loading…
Pros: Clarity, Resolution, Imaging, Instrument separation
Cons: May lack bass "oomph" for some people, bad recordings will be BAD.
Months ago I believed the JH13Pro Freqphase to have the most clarity when it came to Custom In-Ear Monitors, but I was properly blown away by the Hidition NT-6 Pro with its death-defying clarity and resolution.

Introduction
After spending a lot of time with my JH13Pro I decided to seek another CIEM to possibly challenge or even defeat it. After browsing the ever-beloved head-fi.org, I became very interested in the Hidition NT-6 and the NT-6 Pro. I read reviews (notably by ljokerl and average_joe) and impressions, and eventually decided to purchase the NT-6 Pro. I contacted head-fiers Barra and average_joe for help, and they both helped me in contacting Hidition and making my purchase. Hidition was very very helpful and excited to help, and I only ran into problems ordering through their online system, but eventually got through. My impressions were taken closed-jaw (as I would only be using them for listening), and my order took around 1-2 months to complete.

I have had my NT-6s for a few months now, and I enjoy them immensely. For this review I am using the current hidition stock cable and these sources:

As usual, my review is based on my own experience and what I think about this product. It is up to YOU to decide whether or not this sound signature is for you! Especially something like the Hidition NT-6 Pro. This CIEM is NOT FOR EVERYONE. 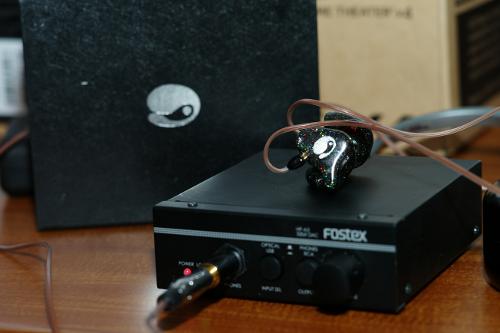 Review
First Impressions:
The first thing I noticed with the NT-6 Pro was the brightness. And came my fear that the sibilance would kill me (sibilance is one thing that I really really hate with IEMs and headphones.) But surprisingly the tracks I first listened to with the NT-6 Pro weren't bad, in fact they were clearer than I'd ever listened to them, especially when they involved many instruments. Also noticeable was the "lack" of the bass "oomph" I'd gotten used to with the MH335DW and the JH13Pro FPs with Tralucent Gold/Silver cables. Also the fit was VERY FIT as I used a closed-jaw impression. Talking or even just the act of smiling while wearing them actually hurts a bit.


Though there is an obvious lack of bass "oomph", after much burn-in the NT-6 has evolved. But the separation of the music and the vocals are clearly rendered by the NT-6 Pro, the bass doesn't feel as fatiguing as compared to another IEM where the bass would quickly tire one's ears.

Instrument separation is definitely one of the strong points of the Hidition NT-6 Pro, as each and every instrument is so clearly rendered even if they can be as "messy" as a track from a death metal band. From the speedy drumming of Mario Duplantier to each scratch on the guitar is set apart from each other. One thing I'd like to really note is how the highs are clearly presented, clearly being rendered above every other instrument in the track. The highs just seem to be right there, no matter what the mids or the lows are doing. Each hit on the cymbals are clearly rendered and so visceral that it sounds like you're really there as they perform/record their track. Even compared to the JH13Pro the highs of the NT-6 are on another level entirely.

Song 3 and 4:
Weak and Powerless and Pet
A Perfect Circle
Thirteenth Step (2003)

I can honestly say that after listening to a song like this on the NT-6 Pro I cannot believe I hadn't heard the separation before. The clarity of these beasts is unmatched by anything I'd heard in the IEM range. Each instrument is effortlessly placed in its "zone" and hardly do any overlap each other. In "Pet" the drums are so clearly set apart they feel so separate from the vocals and the guitars. It really is a great experience to listen to something like this, especially if you love listening to individual instruments like I do.

Simply beautiful. Classical music is wonderfully and masterfully woven into intricate details with the highs extension that is so ever present in the NT-6 Pro.

Another masterpiece, and listening to that saxophone by Paul Desmond with such clarity makes you just get goosebumps all over. Brubeck's timeless masterpiece truly shines with wonderful highs and mids that the Hidition delivers.

Unfortunately, this is one of the worst parts with regards to the NT-6 Pro. With all that treble extension and brightness, some recordings can get VERY SIBILANT. I couldn't get past this song even though I love listening to it with the MH335DW. The sibilance was too much for me. Some recordings are just too much and are rendered unlistenable.

Final Thoughts:
I love the NT-6 Pro and I do not regret purchasing it. I'd happily recommend it to anyone who likes Rock, Classical, Jazz, and even Metal. I'd encourage anyone who loves instruments and incredible clarity to really listen to this beautiful CIEM. If you're after vocals I'd suggest the JH13 or the MH335, as the warmer signature is very much more for you, and the brightness of the NT-6 Pro may prove too "thin" in that aspect.

Hopefully my review was helpful to you and thanks for reading!
Reactions: proedros and Bratec Krolik
View previous replies…

VisceriousZERO
You won't regret it. Its a great CIEM even if it is a bright one. This coming from a guy who LOVED the LCD-3 (I say loveD because Abyss yo!)