Menu
Log in
Register
Install the app
You are using an out of date browser. It may not display this or other websites correctly.
You should upgrade or use an alternative browser.
Whats your view on B&O Equipment

A few years ago I was checking out some classic Quad ESL-57s from a somewhat local craigslist seller. They ended up not being in the condition I wanted, so I passed. But while there the seller let me check out his system. He was in process of switching from some Rockport Antares speakers powered by some Manley Labs monoblocks, to the new (at the time) Beolab 5 system. Source was a Plinius CDP, I assume pretty nice but I don't really know.

I've not personally dealt with B&O other than this, but I was supremely impressed. This $16k system was clearly superior to the Rockport/Manley system, which was easily $60k or more. It was not even close.

He said he was moving away from vinyl and selling his Clearaudio turntable, so I did not get to hear if the analog in worked as well as the digital in. I have to say though, the Beolab 5 is one of the best speakers I have ever heard, at any price.

I've noticed a lot of B&O products do look incredibly cheesy. It's as if they have 2 seperate divisions; one for serious stuff like developing ICEpower and the Acoustic Lens in the Beolab 5. The other division sells "lifestyle" gear at an outrageous price, in order to fund the serious division.
My reviews: Darko.Audio | Stereophile (all that's left of my InnerFidelity work)

I owned a turntable of theirs for years and..........bought it then because of the looks and passed on something better that I later regretted hugely. Oh well. They also own the ICE amp patent I believe. I'd totally pass on their stuff though. Not real audiophile material.

I'd always thought their ICE amp was actually patented to Samsung. Also I know that B&O did have bring out an MP3 player a while back and when I had a good look at the back of it, it said Samsung on it, in which made me beleieve that this was a re-badged Samsung with a few different cosmetic extras and off course a ridiculous price rise.

I've got an old Beomaster 1900 that I picked up for about 100 a few years back. It's in storage now, but it sounds fairly good and I love the build quality and styling. It's made of aluminum and walnut - very attractive - and can hang on the wall.

Sooner or later, I'll drop it into a bedroom system, paired with audiophile speakers.

If you like the looks, I'd recommend picking up one of their older systems. Prices are good these days.
Nothing to see here. Move along.
S

The ICEpower division of B&O owns the patent on the technology.

I use one of the ICE Power variants, the 500ASP modules (D-Sonic M500S) as power amp for my speaker system. The price is more than reasonable unless you buy them from brand names like Bel Canto, Rowland, etc. All of them use the same modules in different enclosures. 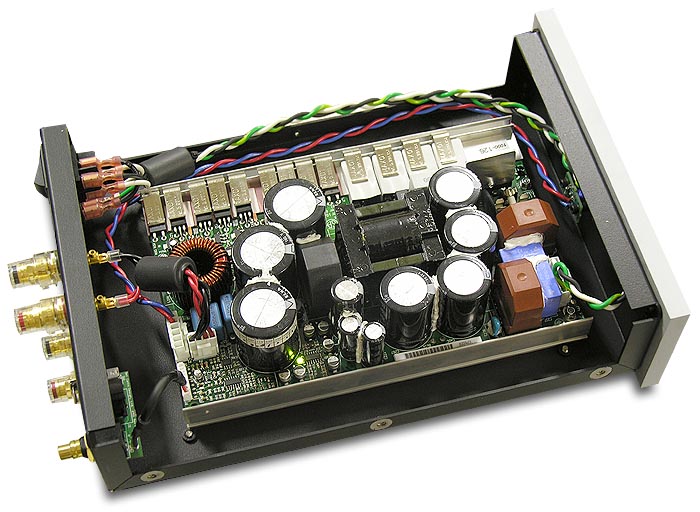 Oh and, I'm very impressed with the SQ, it sounds like a tube amp.

Unbelievable!!! another audio ripoff in the style of Lexicon

Not exactly. Bel Canto didn't buy somebody else's ICEpower amp and stuff it, case included, into their own enclosure. That would be pulling a Lexicon. They bought the same ICEpower module that everyone else has access to, and used it to make their own amp. IIRC, the power supply is also their design. They can charge whatever they want for it. That's how this industry works. It's not a "rebadged" anything.

Many (most?) of the Class D amps are based on off the shelf modules, so you're going to see this kind of thing.

^
I couldn't find any info about the power supply was designed by Bel Canto. Can you point a link to where you get that information?
The ICE Power modules are plug and play, you just have to put them into an enclosure, install the wiring, binding posts, etc and you're done.

The ICE power modules include on-board power supply, so (as h.rav said) it is a plug-and-play solution. As such the Bel-Canto and D-Sonic appear to contain the exact same amplifier board in different housings. Yet one is $1000 more for exactly the same internals. Therefore it is "in sentiment" exactly the same as the Lexicon scandal.

So Bel-Canto rips-off it's customers. Another company to distrust, and that's a shame.

I have a couple of their turntables that I picked up on ebay. Got them cheap and they are pretty respectable performers IMO. One has a busted cover and it is intended to be used for spare parts when needed.
My Feedback

I have one of their turntables!
Sounds great.

No, Rowland and Halcro "rip off" customers, Bel-Canto offers a fair price, and D-Sonic offers a good deal...all on the same $500 ICE module.

Sorry, but I think all of the above should be shot (except maybe D-Sonic) as NO self respecting high-end audio company should be using an ICE module let alone charging $2,000-8,000 for amps using the modules!!!!!!!!!

I still keep an old Beovision Avant that I bought in Copenhagen 12 years ago. I had the tube changed about two years ago and it's still going strong. These days I just use it to play music CDs since the sound coming from the dynamic speakers is incredible. The remote alone can double as a hammer!

CrazyRay, while I am no fan of B&O I have to say that turntable looks seriously cool!
You must log in or register to reply here.