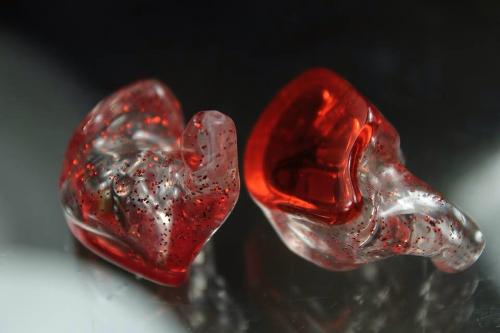 See full thread gallery...
You are using an out of date browser. It may not display this or other websites correctly.
You should upgrade or use an alternative browser.
Westone Introduces the ES60 - 6BA Custom In Ear

goodvibes said:
KInd of surprised it's a dual instead of triple bore. Maybe the tweeter and mid share a nozzle like the twfk.
Click to expand...


Possibly this is an attempt to make it more compatible with smaller ear canals.  It might also be connected to the tuning aspect which could be the same as the 6 driver universal.  I'm just guessing here so don't take this as gospel.
-

These are my old Westone 3's btw Preorders start tomorrow. Anyone getting them?

They just released new info on their website: http://www.westoneaudio.com/index.php/westone-elite-series.html
MSRP $1499!

Has anyone listened to these yet. And they are triple bore.
Portable: AK 240 balanced > / Noble Encore-C

Sonicsense.com  has these for $1.299. Kinda cheap. Am seriously thinking about getting mine replaced (I have the ES5) once I hear the Roxannes and the ES60 hopefully next year in spring.

saraguie said:
Has anyone listened to these yet. And they are triple bore.
Click to expand...

Where on Earth you read that? Everywhere I looked said duel bore

Ah, I see you're new here
Click to expand...

LOL Jimlad bring a troll here. Or maybe he didn't see Spyro's profile and thought he was a newbie

Where on Earth you read that? Everywhere I looked said duel bore
Click to expand...


I agree. The Westone website for the ES60 says they are dual bore: "Westone’s Dual Bore technology allows for the IEM’s high and low frequency sound components..."

saraguie said:
Has anyone listened to these yet. And they are triple bore.
Click to expand...

Where on Earth you read that? Everywhere I looked said duel bore
Click to expand...

superrab said:
I agree. The Westone website for the ES60 says they are dual bore: "Westone’s Dual Bore technology allows for the IEM’s high and low frequency sound components..."


My apologies I was wrong.  Anyone have a listen and impressions?
Portable: AK 240 balanced > / Noble Encore-C


"I've reviewed a lot of in-, on- and over-the-ear headphones, but the Westone Elite Series ES60 custom molded in-ear headphone is the "quietest" I've heard. Superior noise-blocking makes a huge difference when you're in a plane, bus, train, office, park, or any noisy environment. Unlike noise-canceling headphones that use battery-powered electronics, the ES60 hushes noise by creating a tight seal in your ear canal.


Each ES60 is hand-built (in Colorado Springs, Colo.) for its owner from the custom ear molds made by their local audiologist. Each earpiece houses six balanced armature drivers; their high- and low-frequency sounds are channeled through separate passages in the sound port and some within the user's ear canal. I talked with Westone's Karl Cartwright about how the ES60s are built. Each one is literally made to order, to perfectly fit the customer's ears.


Cartwright explained that the earpieces aren't exact duplicates of the audiologist's molds -- if they were it would be exceedingly difficult to insert and extract them to and from your ears. Westone technicians make judgment calls about where to include wiggle room, but maintain a secure seal to block noise and provide optimum sound quality. Based on the ES60s I have here, the techs really know what they're doing.


Regarding the ES60's exceptional noise-blocking abilities, the headphone's earpieces are made from two materials. The part that fits inside your ear canal is a temperature-reactive, semisoft plastic, while the rest of the earpiece is hard acrylic plastic. When I first inserted the ES60s, they felt like any other custom headphone, but a few minutes later the seal improved, blocking more external noise and improving the ES60s' bass output. The ES60s blocked the New York City subway's din better than any other custom in-ear I've tried to date.


Better isolation allows me to turn the volume down, so I can enjoy my music at a safer volume and still hear the quieter, more subtle details in the music. The "Flex Canal" feature isn't just for the top-of-the-line ES60 -- all ES Series custom models have it. Prices start at $450 for the ES10. Before you buy any custom molded-to-your-ear headphones, you'll need to first visit an audiologist to make impressions of your ear canals.


The ES60s' user-replaceable cables are thinner and more comfortable than most of the cables that come with custom in-ears; Westone is now using MMCX connectors on the earpieces, which I'm starting to see on some other brands' in-ears (Shure, NuForce), too. You can order the ES60 with an Apple or Android mic/control cable.


Listening to the ES60


The treble detailing is incredible, so percussion instruments really come alive. And handclaps, which are notoriously difficult to get right, sound more lifelike over the ES60s. Bass is flat-out amazing; when a drummer really hammers his kick drum you feel it. Theo Parrish's "Parallel Dimensions" album has awesome deep bass passages, and the ES60s left no doubt about that. It's not just bass quantity; the taut definition, texture, and shading down there is ahead of the pack.


When I compared the ES60 with Shure's flagship universal-fit SE846 in-ear 'phones ($999), the differences in clarity were very significant. The ES60 was much better, and dynamic impact and liveliness were immediately evident. The ES60 did a much better job blocking external noise on the subway. The SE846 is terrific, but the ES60 is better and well worth the difference in price.


To finish, I pitted the ES60 against my current favorite in-ear, the Jerry Harvey JH13 ($1,099). Switching between the two in-ears, I still found a lot to like about the JH13, but the ES60 had more oomph. They're both high-resolution champs -- both unleash spacious soundstages, but the ES60's prodigious bass impact and power edged ahead of the JH13's. The ES60 also did a better job blocking external noise, and that clinched the decision: it's the new champ. I'm expecting JH Audio's new reference model, the Roxanne ($1,599) soon, so the fight isn't over yet.


Up to this point, I listened to the ES60 only with my iPod Classic, but considering this headphone's lofty MSRP, I thought it would make sense to hook it up to my favorite portable headphone amp/digital converter, the Centrance Hi-Fi M8. The extra muscle added more weight to the bass, dynamics punched even harder, and the stereo soundstage enlarged. Stepping up to a headphone amp/digital converter isn't essential, but it's an upgrade worth considering.


The ES60 prices start at $1,300 (price varies based on custom materials and configurations selected) through authorized dealers (availability is limited outside the US). Westone makes a broad range of in-ear headphones, and the universal fit models are more affordable, the UM Pro 10 retails for $150."

I wouldn't trust Cnet reviews though.
Anyone made orders for the ES60 already ? or have heard a demo?
You must log in or register to reply here.