You are using an out of date browser. It may not display this or other websites correctly.
You should upgrade or use an alternative browser.
Vintage Integrated Amps or Receivers are lost gems.

A friend was astonished at how good his old early 80’s Kyocera Receivers’ headphone section sounded. He has a number of amps and was under the impression that it would take a headphone amp costing several hundred dollars to best it.

I have a 80’s Kyocera Receiver myself but I also have a early 70’s Sansui AU-9900 Integrated Amp which I tried out today – WOW!

I haven’t tried my Kyocera yet, its boxed away. I’ll pull it out in time but for now I can compare the old Sansui to an Audio by Van Alstine Trandesence 7 and I can mentally compare it to a Grado 1 and a ASL EL84 amp that a friend has/had. The soundstage isn’t quite as large as the AVA T7 but the richness and weight is certainly there. Detail is quite good although not so extended on the top end. The Sansui is in NO way bright or glaring, its quite tube’ish in its quality. Midrange vocals are very nice, bottom end is solid, strong and tight.

It absolutely runs circles around the Grado and the ASL tube amp, it also gives the AVA T7 a good strong run, there is certainly some tradeoffs but that says a lot for this old beast.

Doesn't even have to be vintage.

I prefer the headphone section of my 2005 Rotel preamp over two headphone amplifiers I own that cost twice as much. More detail, better separation, more oomph. This is with Sennheiser HD-650s and a Cardas cable.

you have quite a beast on your hands. my marantz 2226 is a nice solid statey alternative headphone out, but in the end the Melos still rules supreme.
Team "Curse You, Head-Fi!"

I have a Marantz 2285 which compares favorably to many headphone amps, and bests many others.

What model Kyocera do you and your friend have? I have an 80's era R-461 that I've been wondering about but I've been to lazy to lug a pair of headphones all the way upstairs to try it out.

I think thsoe Kyoceras are some of the best deals around - their cd players also have great headphone sections.
My archived feedback

I remember at the time shopping for an amp/preamp or Integrated amp but as a poor college student couldn’t afford much. The best I could afford was a low powered NAD and quite honestly I wanted something better. I shopped in audio boutiques for new and used gear. One place I frequented sold Kyocera gear as well as lots of other high end stuff. The Kyocera receivers and integrated amps rivaled competing McIntosh and Aragon equipment and absolutely floored anything from Adcom or NAD.
Kyocera sold two sister models on the top end in a Receiver, or Integrated/Tuner as they liked to call it. One was 60 wpc, the other 80 wpc the other differences were subtle. They cost around $1200 to $1400 in 1983 and a McIntosh was about the same price, maybe a couple of hundred dollars more. I liked the sound of the Kyocera better. They also sold a high end cassette deck and CD Player model or two and that was about it in the top end. They also sold a lower end model series that was more reasonably priced with Denon, NAD and Adcom. I remember thinking they were about as good, not anything special where their best was exceptionally good for the money.
I bought a used (demo) unit that was nearly 2 years old. The store no longer sold Kyocera and had a few models laying around. I got it for about $600 (50% off).

Unfortunately for Kyocera, the audiophile market didn’t give much credit to anything Japanese and anyone in the market to buy a Receiver or similar at that price point bought a McIntosh or something else American or British. Kyocera sales never got off the ground in America and after the mid 80’s were virtually unavailable in the US except for some select low end (mid fi) stuff that they actually didn’t even make and rebadged for sale in your local electronics-R-us stores till they disappeared by the end of the 80’s entirely. In the late 90’s they reappeared with phones and other telecommunications stuff while their Hi End audio is still only available in Japan. I don’t think they even make audio anymore.

They were and are primarily a ceramics company. Kyoto Ceramics made world class ceramic art and telecom semi conductors as well as pioneering solar panel and optics. I remember working in the film prep industry some time ago and Kyocera had a reputation for making the absolute best scissor money could buy (and they were expensive). Their cell phones do them no justice. I also remember they made a turn table and cartridge that was entirely made of ceramic material that rivaled famous makers costing thousands. Again, very little was available in the US and some models only for a couple of years way back then.

I read somewhere that Kyocera made Nakamichi. Anyone know if that's true?
Team 60Ω 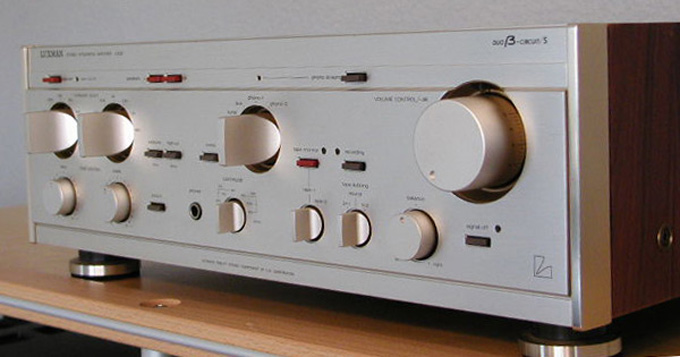 The music business is a cruel and shallow money trench, a long plastic hallway where thieves and pimps run free and good men die like dogs.There's also a negative side. -- attributed to Hunter S. Thompson

I agree, but my vintage amps go even further back, to the early 1960's. If you want a nice, warm and luscious tube sound, look for the H.H. Scott Integrateds. I have an LK-48 (222c) which relies on 4 7189 tubes (High voltage EL84), and it rocks with my Paradigm Studio 20's. The best part about vintage amps is they can be had for pennies on the dollar compared to modern production amps of the same quality.

We should come up with "Team Vintage Integrated Amp"!!

The better vintage integrated amplifiers and receivers can keep up with much of today's gear. The secret is in the sauce. In this case the secret ingredient is in the robust power supplies usually found in these units. Oversized, rock solid, with very little ripple. Today's power supplies are smaller, lighter and more efficient but they can be noisier in the ultrasonic range. Today the cost of offering an amplifier with the type of power supply used in the vintage units would be prohibitively expensive for all but the most expensive consumer lines.

The carbon composition resistors used in older equipment sound great if they are in the audio path. Unfortunately they are noisy and tend to drift out of spec as they age. Still, they add a certain quality to the sound that more modern gear using quieter metal film resistors often lack.

The better vintage tube gear gives a good showing of itself when compared with modern tube gear, again because of those oversized power supplies, not to mention really high quality vintage output transformers. They don't make iron (transformers) like they used to, either because the material used in the solid core of the transformer is no longer readily available, or because the complex windings needed to achieve wide bandwith with minimum phase shift and distortion are too expensive to manufacture. A vintage tube amplifier is no better, or worse, than the condition and quality of its transformers. Usually all of the other amplifier parts can be readily sourced and replaced or upgraded, but it is nothing without the proper intact iron.
There ought to be a law
Against you cominâ around
You should be made
To wear earphones
Because something is happening hereBut you donât know what it isDo you, mister jones? - Ballad of a Thin Man, Bob Dylan

From time to time I'll plug into my old Technics reciever from 1983. It sounds pretty good and helps the headphones bump a little more.

However aren't most amps like those only good for 300+ ohm headphones. I was under the impression that they generally have rather high output impedance and that it would generally end up distorting at high gain. Mainly due to the fact that it's not getting high gain across the load because of the voltage division. Therefore it ends up clipping earlier.

Also, many lack the proper current supply for low ohmage headphones. V=IR I=V/R where R is lower and the voltage remains the same I increases.

Who knows though, I guess not all amps were made that way back then.


The HP-2s sound kinda nice out of the Marantz, tho again it's a bit solid-statey. But being of low ohmage doesn't seem to be a problem, and it certainly is getting enough current!
Team "Curse You, Head-Fi!"

Often there is very good synergy between the higher impedance headphones and a vintage amplifier/receiver, however, some prefer to listen to low impedance phones connected to older audio gear. So it is a good idea to audition your chosen headphones with the specific vintage amplifier you are considering purchasing and decide if you like the way this pairing sounds.

The available power from the headphone jack of most vintage units is many times what is required for almost any dynamic headphone (save for the now discontinued AKG K1000). As you stated, in these units it is often the case that the left and right channels of the main power amplifier are connected to the headphone jack using a voltage dividing network of resistors. This allows the listener to use a wider range of the volume control when setting the listening volume and also prevents an extreme mismatch in listening volume when switching from speakers to headphones.

A 30 watt per channel solid state receiver can be expected to deliver rated power when connected to 4 or 8 ohm speakers, but as the impedance of the speaker or headphone rises, the power output will become more limited such that with a 300 ohm headphone, and the additional impedance of the voltage divider network, the available power becomes limited to just 1 or 2 watts. In this case the available power is limited by the amplifier's ability to deliver the needed voltage, not the amount of current. Even so, this seemingly small amount of power is many times what is required by the headphones to achieve maximum output levels. This is also greater than the available power that can be expected from the headphone jack of more modern audio gear where an integrated circuit op-amp is capable of providing perhaps 50~100 milliwatts of power at 32 ohms.

There ought to be a law
Against you cominâ around
You should be made
To wear earphones
Because something is happening hereBut you donât know what it isDo you, mister jones? - Ballad of a Thin Man, Bob Dylan
You must log in or register to reply here.