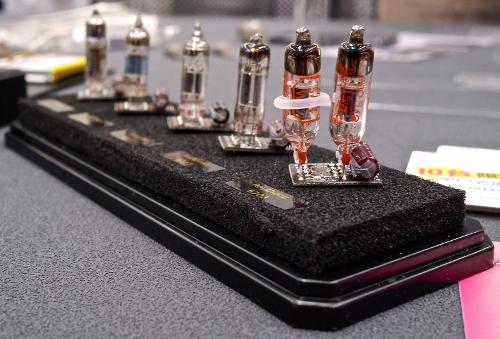 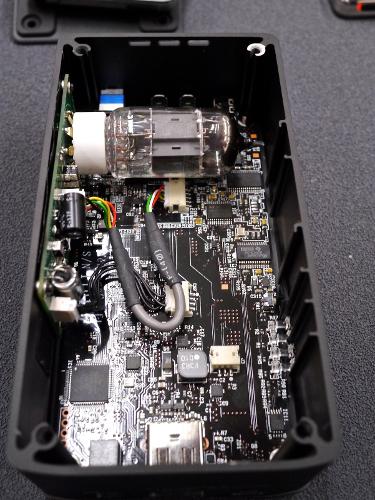 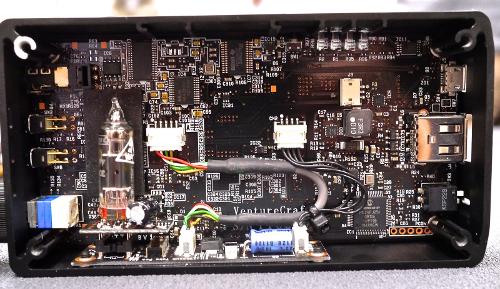 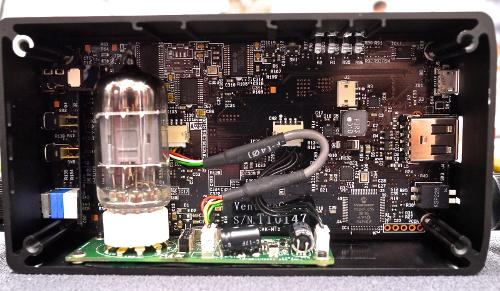 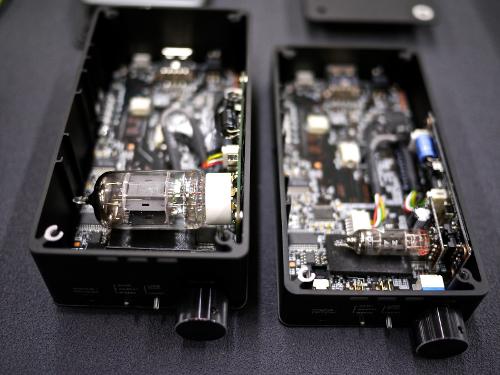 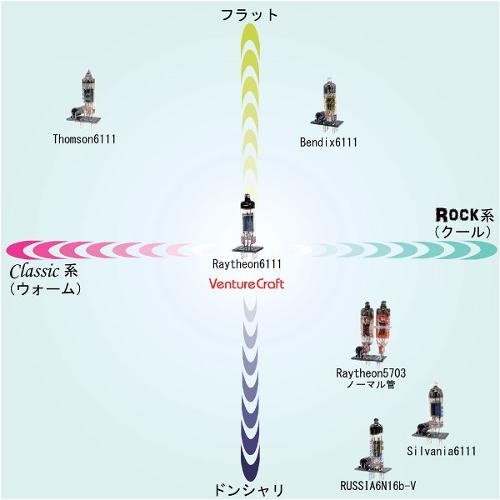 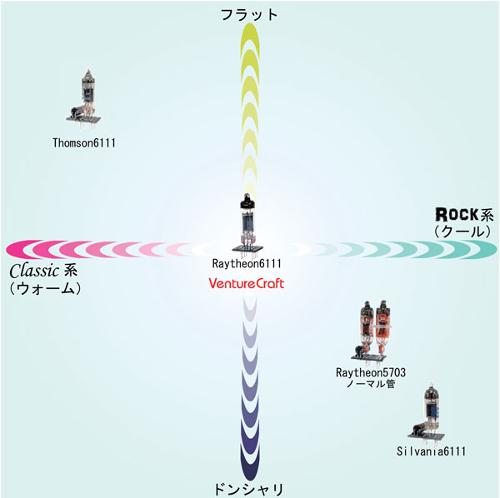 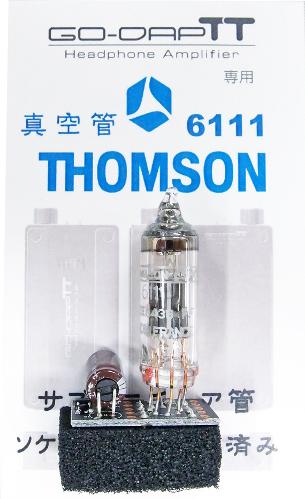 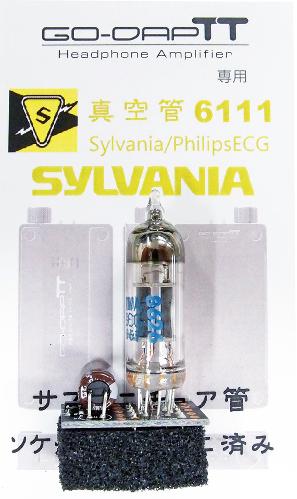 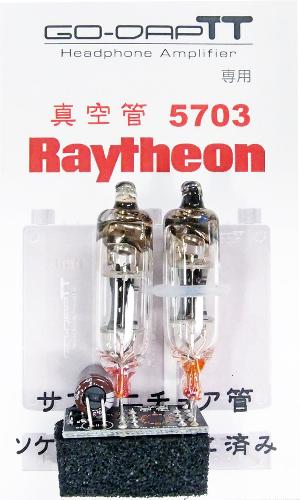 As mentioned by @ExpatInJapan here, VentureCraft is coming up with a new Go-DAP that can be used for iDevices and for Desktop/Laptop PCs. Preliminary impressions are that it sounds the pretty much the same as the Go-DAP 4.0 for iPhone 4/4S. It's dropped the proprietary 4/4S jacket and is more like the HP-P1/CLAS type concept (i.e. separate, non-integrated design), but it's slimmer than the HP-P1. It can be used with any current iDevice like the HP-P1, but the added functionality is that there's a switch which will allow it to be used as a PC Desktop/Laptop/Notebook USB DAC too. I believe this is the first such device I'm aware of anyway (not including the patch work of USB DAC+powered up+CCK to the iPad).

As the specs says :-

Here are some pix of the prototype :- The Go-DAP TT is an iDevice/PC USB Audio DAC/Amp that sports a Raytheon 6111SQ tube. It has the same battery as the 3500mAh as the SounDroid Typhoon. Full specs are unknown at the moment but will be updated when known. Price is quoted to be Y79,800 (18th June 2013). Hmm, maybe have to put my possible Fostex hp_p1 purchase on hold.

So how does this work, it just sits on top, like a mini clas/amp? how does the ipod stay affixed?

I wonder If in the future there will be different op amp options.
www.headpie.net

Dooh! Apologies mate, I should have mentioned it to you. Yeah it's basically like the HP-P1, where your iPhone/Touch/iPod sits on top with a separate USB/30-pin Dock cable. Good question about the OpAmp, I'll talk to VentureCraft later next week or early week after to find out about OpAmp options.
1) [3rd January 2020] Dali iO-6 Review
2) [5th August 2019] Fostex TM2 True Wireless Review
3) Paypal Woes Thread
4) Classified Scammers List
Share This Post
post-8380182
Post #4 of 507

I wonder when the release date for this would be, I like the slim lines of it and appreciate your reviews/thoughts on these products as you have owned quite a few of them.

I've not reviewed the AD8066 yet. It's Analog Devices (yet another in addition to the Burr Brown & Muses). I'd need to have a listen to the AD8066.

The Go-DAP X is supposedly due around mid-summer. Yes the slim and sleekness is quite attractive actually. I'm still not certain about the volume knob yet. Although it's nice that it's protected but so far I've been used to the protruding-styled volume knob.

Yeah, I know its early days on this device for you too, and its an unknown,  just getting my queries out in advance

Excited, now have to decide whether to get the Fostex whilst I wait....hmmm.

Its surprising they didnt think of having a an all in one device (for all ipods/touches/iphones) right off the bat before. Having the Go-Dap only for the iphone4 series severely limited their potential customer base.

Anyway, I am excited about this product, the CLAS is nice and you can choose what amp to combine with it-but expensive, the Fostex is great-but still has that bulk and updating the firmware is troublesome, The DX100 is a great all in one but not all would like the UI.

*Another wonder will it also be using the AKM AK4353 DAC?
www.headpie.net Top picture (from left) is ? and ?, volume control and headphone port.

on the right side vertical pic -  I can read `surround` and `battery/bass boost` for the two buttons, below that are lights to show battery charging and battery remaining.

I saw this briefly on Saturday at the festival. They were showing a leather case that would hold both an iphone as well as this Go-DAP X unit back-to-back. Certainly bulkier than the one that sleeves in the iPhone but maybe certainly less bulky than a iDevice/CLAS/National combo and even slimmer than an iDevice/HP-P1 combo.

I'm pretty rough with my mobile gear so I'm wary of that tiny switch that's used on the Go-DAP 4. I don't know if that small switch is also on the X device? Looks like that is gone.

The VentureCraft guy was saying to me, "it'll work with an iPhone 5." I looked at him quizzically and he explained, "well whatever the next iPhone will be, this will work with that future device."
visit my blog on the Intarweb: https://kanai.net/weblog/
"ALL THESE WORLDS ARE YOURS—EXCEPT TITAN. ATTEMPT NO LANDINGS THERE."
Share This Post
post-8382555
Post #9 of 507

I'm actually surprised nobody talked about the price...

So, is there any information on pricing?

AKM AK4353 for now. But it's also a prototype and VentureCraft mailed me that even the "Go-DAP X" name is temporary for now. i.e. may still change in the weeks/months to come.
1) [3rd January 2020] Dali iO-6 Review
2) [5th August 2019] Fostex TM2 True Wireless Review
3) Paypal Woes Thread
4) Classified Scammers List
Share This Post
You must log in or register to reply here.