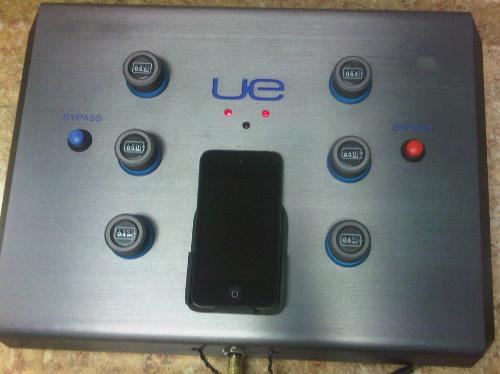 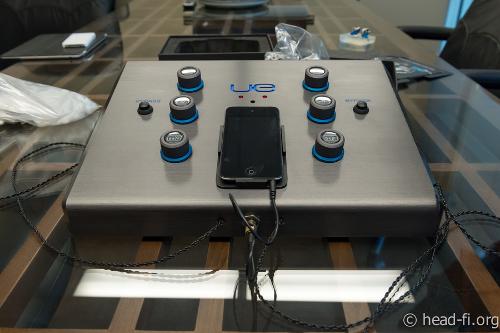 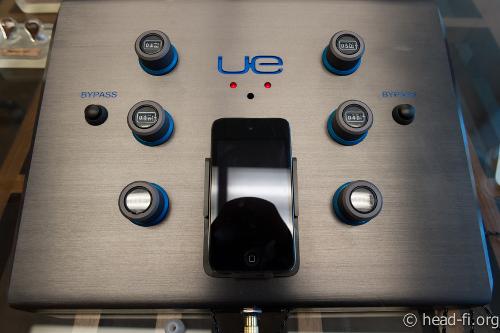 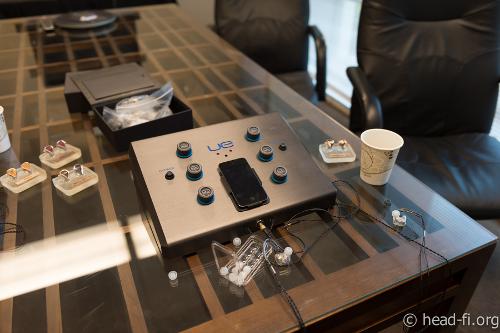 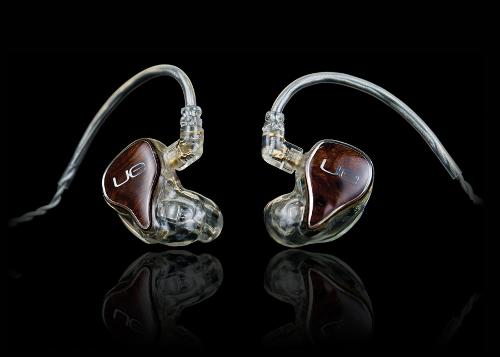 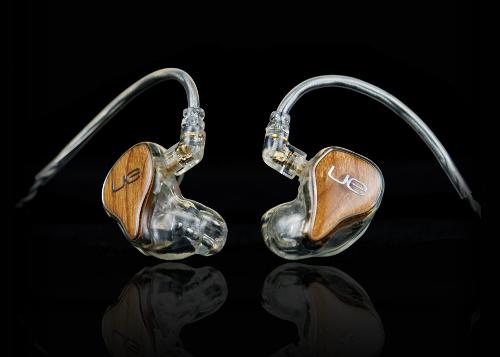 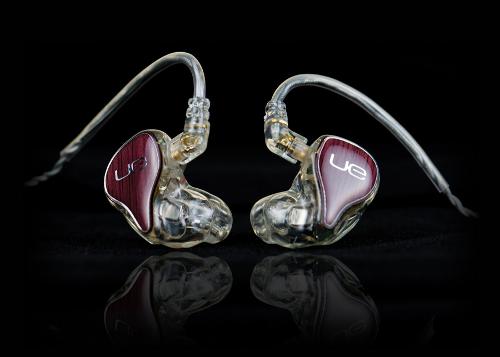 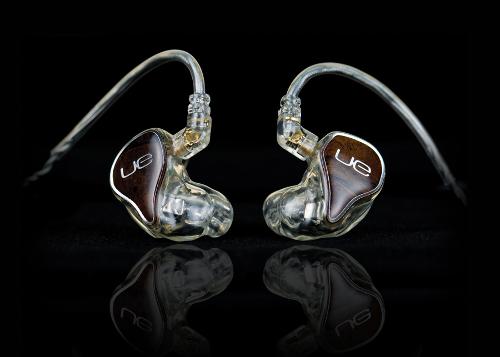 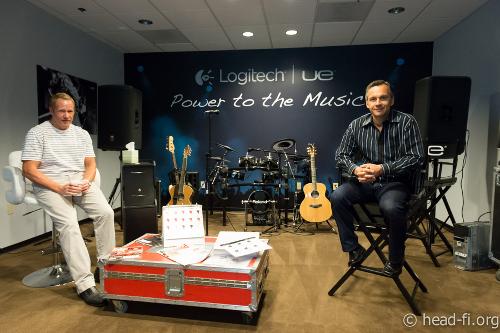 See full thread gallery...
You are using an out of date browser. It may not display this or other websites correctly.
You should upgrade or use an alternative browser.
Ultimate Ears Personal Reference Monitors: The *Custom* Custom In-Ear Monitor


(Clicking on a photo will show a larger versions of it.)​
​ ​
A few different shots of the Ultimate Ears Personal Reference Tuning Box.​
​
The Personal Reference Tuning Box incorporates both analog and DSP circuitry. I visited UE's Irvine offices last week to get fitted for a pair, and found the tuning process to be quite simple, straightforward. On the Tuning Box, there are three tuning knobs per channel, for lows, mids, and highs. (The process starts with the tuning knobs center-set to produce a perceived neutral, flat tonal balance.) There is also one "bypass" button per channel. The bypass button, when held down, allows you to bypass any changes you've made with the tuning knobs, and so returning to a neutral (flat) tonal balance for as long as they're pressed. The bypass buttons are critical to the process, as they allow you to instantly compare your custom tuning to neutral, on a per-channel basis, or both channels at once.
Here's what I did with mine. I have a set of the Ultimate Ears In-Ear Reference Monitor, and I love it for what it is-- a neutral reference. The In-Ear Reference Monitor is my sonic palate cleanser--when I forget what neutral sounds like, I can always turn to it to remind me. The IERM is also a great-sounding, very revealing headphone, and neutrality is a great sonic flavor to have at the ready. But perceived neutrality isn't what I'm after all of the time, or even most of the time. What I want most of the time is something with mids slightly bloomier than neutral, and bass just a touch (and I mean just a touch) above neutral. As for treble, just a hint of sparkle (without accentuating sibilance) works very well for my tastes.  With the Personal Reference Monitor (PRM) I tuned, I hope to have exactly that. There's one more thing I tuned for, though, and this speaks even further to the "personal" in the name "Personal Reference Monitor." Simply put, my right ear is better than my left one. My right ear has greater acuity through some of the mids and treble than my left. It has been this way for years. Our brains are amazing things, though, working to make the sound of the two ears combined more coherent and balanced than listening to them one at a time might suggest they could be. Still, though, it's not going to be the same, not as ideal, as if the ears could somehow be made equal, or at least more equal. And it was with this in mind when I tuned my set. Using a variety of test tones on my iPhone (which I plugged into the Tuning Box), I fine-tuned my PRM settings to better center the image through the mids and highs. Again, my brain does a great job combining my ears to be centered-ish, but through fine-tuning (and liberal use of the bypass buttons), I carefully tuned the image to fill my headspace even more uniformly, more perfectly.
Of course, I don't listen to test tones except for testing, so the bulk of my tuning session was with some of my favorite music from the various genres I most listen to. The final result through the demo earpieces was awesome, clearly more to my preference with my music than in bypass mode. How long did this take? For me, about 45 minutes in total. You can take as little or as much time as you'd like with the Tuning Box--there's no set tuning session length.
How did the final product--my custom-molded Personal Reference Monitor--turn out? I'll let you know after I receive it in a couple of days. I've found demo units of custom IEMs generally good approximations of how the final product will sound, but have consistently found the final custom product to always edge out their universal-fit demos (and I've demoed the final products against their universal-fit demos on several occasions). I'm hoping this trend continues with the custom-fit PRM, because, again, the universal-fit Ultimate Ears Personal Reference Monitor demos I tuned were exceedingly good to my ears. After spending some time with my self-tuned UE's, I'll let you know how I did.
The Ultimate Ears Personal Reference Monitor is a three-way, five-driver-per-side design. Like other Ultimate Ears custom monitors, the PRM can be adorned with custom designs and logos, and made in just about any colors you can dream up. There are also four custom wood faceplate options available exclusively for the Personal Reference Monitor. Here are photos of the four custom wood faceplate options available only for the UE PRM (I chose the Carpathian Elm Burl): The Ultimate Ears Personal Reference Monitor will be available for sale June 2012, with a suggested retail price of $1,999.99. You can find out more at UE's website.
Again, I'll post more after I've heard the final product.
• Headphone Measurements: Did We Really Need A New Hearing Simulation Standard? •

This is actually pretty interesting, shame it costs an arm and a leg. Interested in how it turns out nontheless

That is actually brilliant. Some other CIEM companies offer re-tuning but it's up to the customer to know what he/she wants. This seems to be more scientific approach.
1) [3rd January 2020] Dali iO-6 Review
2) [5th August 2019] Fostex TM2 True Wireless Review
3) Paypal Woes Thread
4) Classified Scammers List

Wow this seems so awesome!
Shame about the lack of locations, especially for being in the UK.

Not that i could afford it ahha!

Makes me want one. just need to find someone else's arm and leg to give up.
Audio is not what you've got, but what you get out of it.

They start to do the wood-like faceplate too.. really fashion looking

That's actually not bad, given what you're getting: personalized service for $2000 when Audeze, Grado, Ultrasone, Sennheiser, Stax, etc. sell off-the shelf products for that much.

Impressive you can choose the sound you like. But this is so tricky to do. You gonna be a professional yourself to make the sound right for different music.
Click to expand...


I do not think it will be that bad. you will 'mess around' with the running knobs until you get the sound that you fond the best!

Do Ultimate Ears disclose how they tune the sound of the final iem - I have heard lots of reference to tuning of custom iem's but never really understood what this involves.
Code:

swimsonny said:
I do not think it will be that bad. you will 'mess around' with the running knobs until you get the sound that you fond the best!
Click to expand...

That sounds like a process that could take days or even weeks considering your ears would have to first adjust to the new sound signature each time and certain headphones have to ability to grow on you while others impresses at first but are a disappointment later down the road. One would have to be very knowledgeable and know specifically the type of sound they are after. Nevertheless a very interesting concept indeed.

drez said:
Do Ultimate Ears disclose how they tune the sound of the final iem - I have heard lots of reference to tuning of custom iem's but never really understood what this involves.
Click to expand...

I look forward to the day that basically a portable iem/amp set up will be able to do exactly this... well, something like this. Completely customizable. You can leave it as you love, tweak on the go or start from scratch when you have a rainy day at home.

That sounds like a process that could take days or even weeks considering your ears would have to first adjust to the new sound signature each time and certain headphones have to ability to grow on you while others impresses at first but are a disappointment later down the road. One would have to be very knowledgeable and know specifically the type of sound they are after. Nevertheless a very interesting concept indeed.
Click to expand...


It would do to get perfect of course and yes you may prefer something initially at first and not like it down the road but at least you get the chance to do it. This is only how i read what Jude said, did you interpret it the same?

Also from listening to different universal IEMs i am pretty sure i know which signature i would go for, bass that is moderate and sits slightly behind the mids, mids forward and then high fairly sparkly in a brief summary, it may take me some time to get it perfect (or as close to it) but i am sure they will be offering advice and be knowledgable on the process ( i should hope). I think it is a fantastic idea and could be game changer! Th price is big and a big step up from other flagship customs but i think if your going for one this would be surely the most attractive option!

London Head-Fi meet 19th October 2013
You must log in or register to reply here.