You are using an out of date browser. It may not display this or other websites correctly.
You should upgrade or use an alternative browser.
UE TF10 by ... Dreamworks?

Mine just arrived. are they made using Shrek ears impression or something?
how the hell do you fit these things? with pictures

I spent more time trying to fit these things in my ears then my wife took getting ready for the marriage.
Also, the cable are damn thick, they just don't contour over your ears... I'm feeling like Frankenstein

I don't think the cables are all that thick. Yes they are very large IEMs, but (almost) everyone knows that before they buy. Now you have a reason to have them reshelled!
last.fm
photography

LOL. I love your honesty.

I stopped wearing mine outdoors when someone starting signing to me... He thought they were hearing aids.

Getting them in gets far quicker and easier after you've done it a few times.

Yes they are not subtle. You can tell that aesthetics took a back seat to performance when these were designed.

Intoflatlines has a good point about re-shelling. I don't know if it's something you've considered but their are a few really good reasons to have it done, one of which is the fact that custom shells don't stick out like stock TF10's.

If you got in on the $99 deal (and the timing on this post makes me think you did) then paying another $100 or so to have Fisher Hearing turn them into custom monitors is easy to justify.
"Grados are like being punched in the face. Stax are like being slapped by a beautiful woman."  Keithpgdrb

I find I have to put the IEM's in and then wrap the cord over my ears. Also have you tried lifting up on your ear and then inserting them?

Lift my ears? only if it's like the face lift surgery kind...

Jokes aside, I found the sound very enjoyable, I will let it burn in and try again later... on some tracks I have the impression of hearing like an echo.

Tf10's experience no audible burn in so if you are burning them in it really isn't worth your time.

So the sibilance that I notice now on a few songs will remain as is??? now I'm disappointed.

I'm not really sure what hockeyb213 is talking about. From what I've read on here you do need to burn them in.

Im with hockeyb213, ive never noticed any burn in effects from any BA driver that I have owned including the TF10's.

Personally, I did notice a big difference from when I first put them on. I first put on the smallest silicone tips, as I know that those would be the ones that fit me and gave it a listen. Source was my laptop with terrible sound card. The bass sounded enormous and there were pretty much no mids or treble. I eventually swapped to the Comply tips while music was still playing and put them in again. The mids and treble returned and it sounded much better. Then I swapped sources to my iPod and Cmoy, and it sounded much clearer. Then I swapped tips back to the smallest silicone and it sounded terribly sibilant to me. A few songs later and now everything sounds good again.

I think that the first change from incredibly bassy w/ no mids or treble to bassy with treble was due to a physical burn in. This occurred relatively quickly, within several minutes. The change to sibilant I feel was due to the change of tips, but the change from sibilant to nice again is due to mental burn in, in my opinion.
last.fm
photography 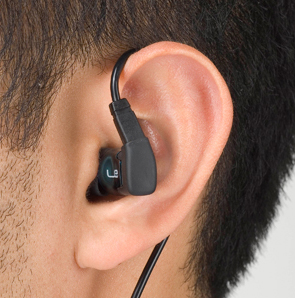 From that angle it looks small but if you go to a front view they are huge.
last.fm
photography

Yes, they are HUGEEEE!!! I actually hate them, which is killing me because I think I might LOVE them more then my SE530's lol. I just cant bare to go outside with them and even inside they are not anywhere near the comfort of my customs. Ill have to reshell after the holidays when I have money again.
You must log in or register to reply here.