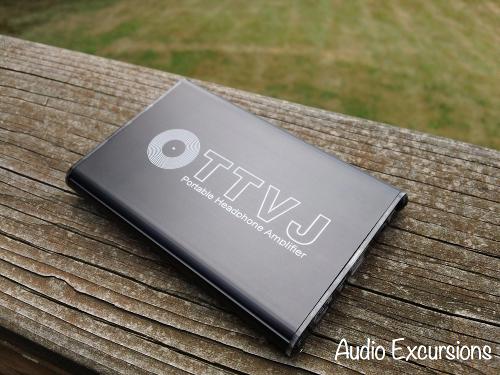 See full thread gallery...
You are using an out of date browser. It may not display this or other websites correctly.
You should upgrade or use an alternative browser.
TTVJ Slim: The Super Sweet Portable Amp (Review) TTVJ, or Todd The Vinyl Junkie, as most people know him by, has unveiled his second portable headphone amp. While I may be a little late to the party, there haven’t been very many reviews on this particular amp. If you didn’t know, Todd was very recognized for releasing the very first miniature vacuum tube portable headphone amp to the market. The new Slim depletes the tubes, in exchange for a new stepped attenuator (less distorted signal) and therefore, a better sound. For $349, this little amp comes in at a very expensive price. Let me be the first to tell you though, the performance you get from the Slim highly outweighs the price.

Sound Evaluation
Even prior to burn in, this thing sounded absolutely fantastic, even with top tiered cans like the Audez’e LCD-2. After 100 hours of burn in, everything tightened up and was refined, although nothing too major. Without going over every specific headphone I tried these with (Audez’e LCD-2, HiFiMan HE-300, Sennheiser HD800 to name a few), I’ll try and sum up the sound as best as I can. When plugging in the TTVJ Slim for the fist time, everything hits you immediately, the soundstage is widened, everything seems more airy, and instrumental separation is taken up a notch. When using the HE-300’s, which have a slightly loose and slow low end, bass was tightened up, sped up a click, and brought forward.

The highs aren’t really something to brag about, but there are some noticeable differences if you’re using less extended headphones like the HD650. The treble sparkled a tad bit more, but not too the point of being bright or sibilant, and was extended a tad bit. Now, the midrange is really where these things shine, and it’s what I loved most about this amp. Listening to a Walk In The Woods on the Halo soundtrack or Yves Vincent’s Frissons D’amour sounded amazing on literally any headphone. While the mids weren’t exactly brought forward, they still sounded very sweet and silky, while not being overwhelming to other parts of the spectrum.

Driving Capacity & Battery Life
As Todd puts it, the Slim can drive all headphones from 0-600 ohms with fabulous fidelity, and he’s pretty spot on with that. It can drive the Audez’e LCD-2, Edition 8, and other top tiered cans very well, although you’ll need something a lot more dedicated to get the full potential out of a headphone like the HD800. (I really wonder how the Slim would sound with the 600 ohm Tesla T1). For the most part though, the TTVJ Slim has a lot of power, and is very ideal for both full sized headphones, and IEM’s. The battery life of the Slim is pretty nice as well. Todd quotes the Slim as having 15 hours of battery life and 2 hours of charge time. On medium level volume when burning in, I clocked about 15 and a half hours and took roughly about 2 hours to recharge.

The Design
Its slim, very slim. Hence the name Slim, if you haven’t caught on already. An aluminum housing wraps around the entire amp and four screws (two on either side) hold the amp together. At the back (or front, whichever you prefer), an input jack for 3.5mm connectors, a USB charge slot, a recessed reset button, and a gain switch, ranging in decibels from 10 to 20. On the front, a 3.5mm output slot, and a power switch, which also acts as the volume slider. I actually prefer the design of the Slim to most other amps I have tested out, as it’s very easy to put in the pocket, isn’t too heavy, and can be used as very nice portable rig when paired with ann iPod via a LOD (TTVJ also offers a few LOD’s on his website. I am using the Reverie by the CablePro).

Final Thoughts
I like this amp, and I like it a lot. The Slim is a very good high end portable amp contender, and while it may not best the likes of the RSA SR-71B or other more expensive amps, the Slim is a very good option for the price range. A better soundstage and super sweet mids is the best way to sum up the Slim, and it’s worth getting for almost any portable setup. The TTVJ Slim can be had for $349 without USB DAC on Todd’s website. Follow the link for more info.

Thx for the nice review.

Banned by order of heir wallet and significant other.

Good review and pretty much how I remembered it during ownership.
Give me sleep.
Old 98 positive Feedback

Nice review, but where's the link?

alphaphoenix said:
Good review and pretty much how I remembered it during ownership.
Click to expand...

Yep, it sure is a fantastic little amp, the price may turn some people off though.

I concur with the comments here. I've got one and it's a superb little amp with a lovable sound, transparent enough to let the DAC section insuflate its own signature into the music but with enough character to make any "digital" sounding DAC sound more analog or organic. Really nice. And the option to get it with a DAC just make it even better.

mayatlab said:
I concur with the comments here. I've got one and it's a superb little amp with a lovable sound, transparent enough to let the DAC section insuflate its own signature into the music but with enough character to make any "digital" sounding DAC sound more analog or organic. Really nice. And the option to get it with a DAC just make it even better.
Click to expand...

Good review! I'm really interested in this amp, but I can't seem to find a place to buy it!
Marleypads how-to

This amp is discontinued by TTVJ. The only way you are going to find it is used; I'd suggest to search the buy, sell, trade section here on head-fi or ebay.
You must log in or register to reply here.