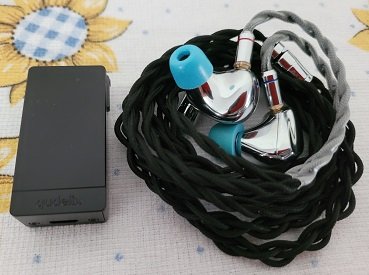 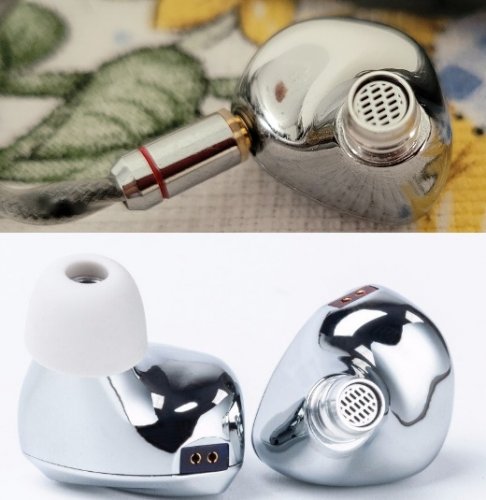 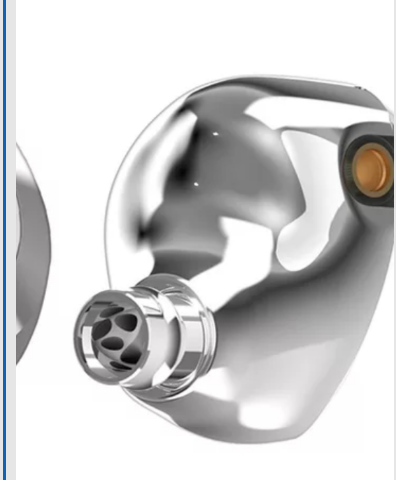 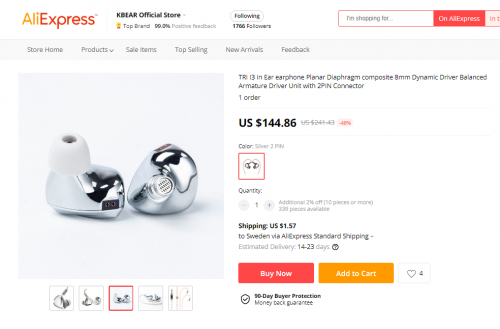 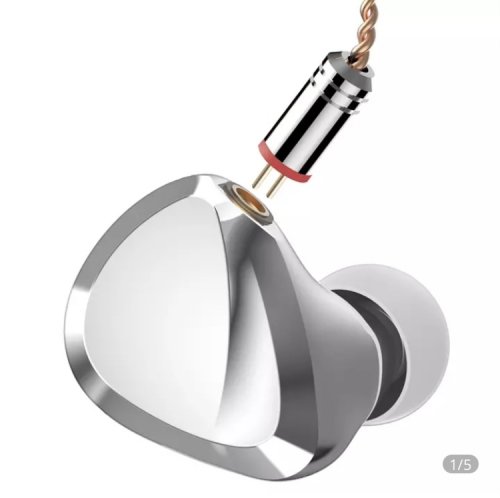 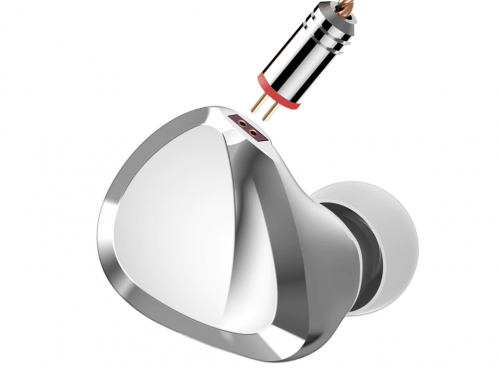 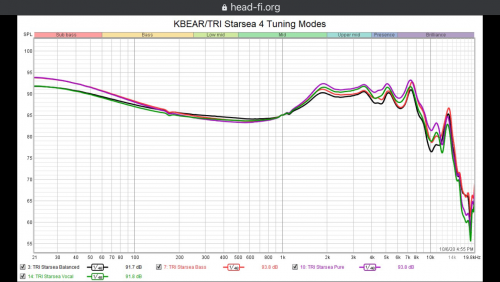 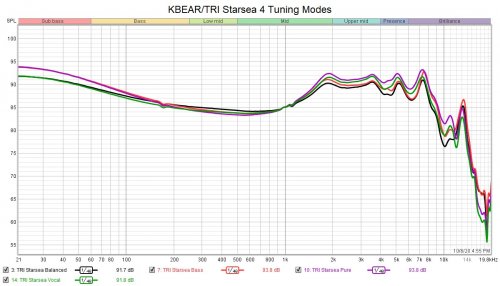 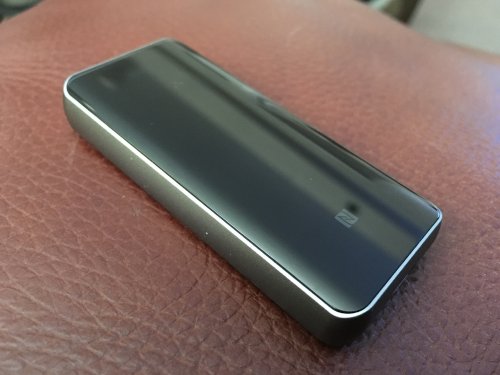 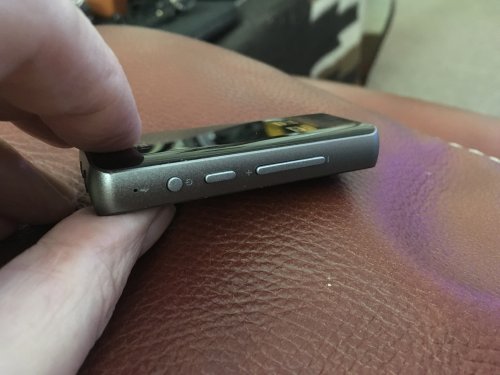 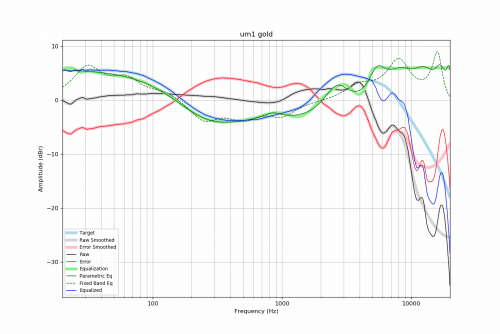 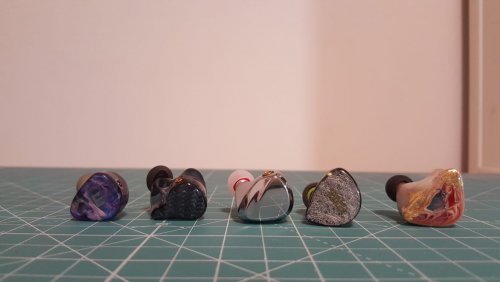 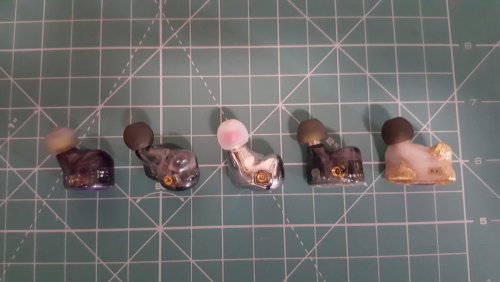 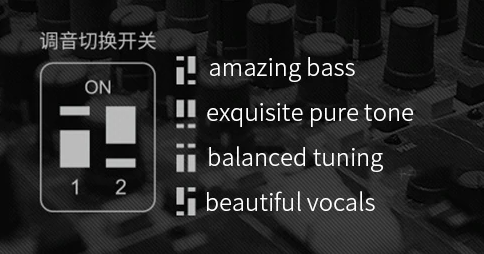 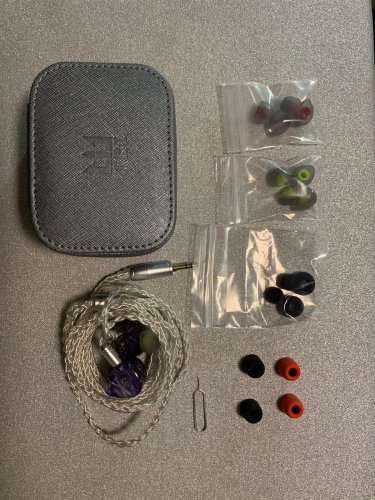 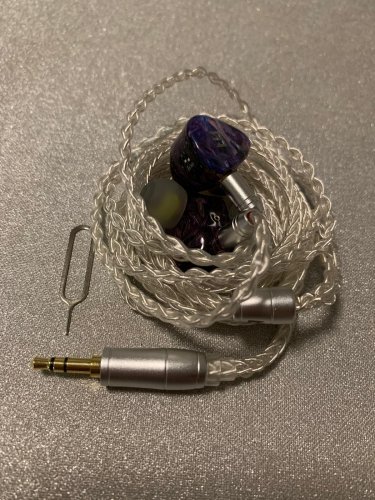 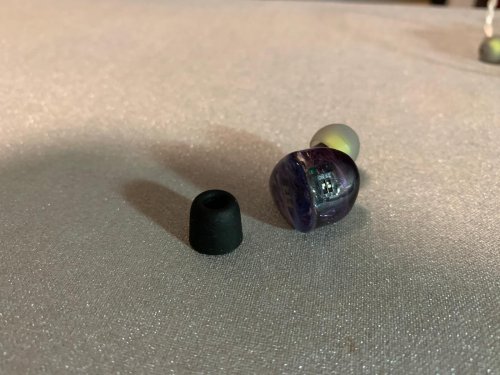 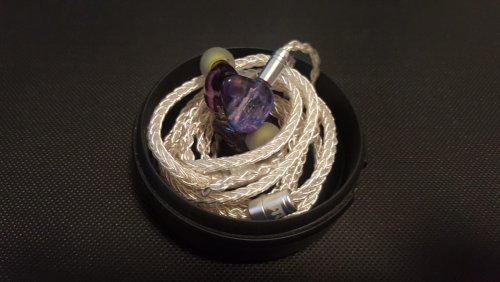 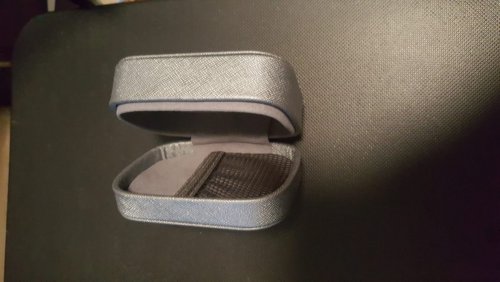 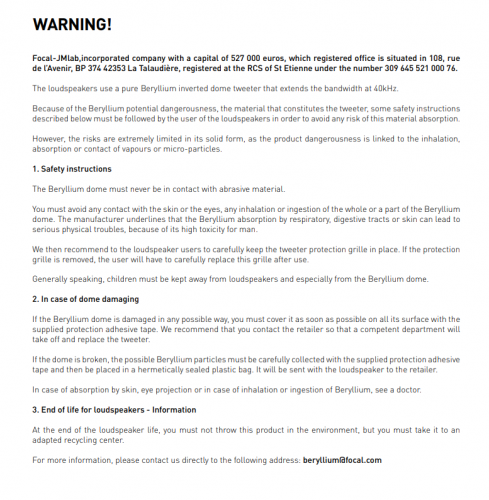 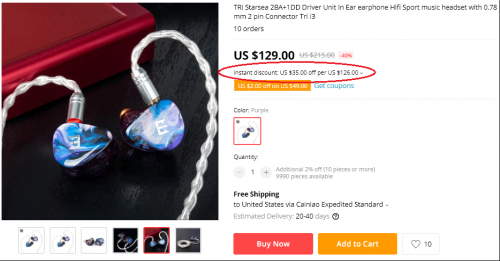 xb0nk3rsx said:
anybody tried dual flange eartips on their i3? I believe soundstage would take a hit, but would improve bass response due to added isolation.
Click to expand...

i3 is already have very big bass with +15db from 1khz
My Final Endgame : Sony IER-Z1R

Does the Tri Starlight have the same tuning as the Shuoer EJ07 or is there a slight difference? The Starlight use Sonion mid-drivers instead Knowles and the estats are a newer model. Does anyone have these two to make a comparison? That would be nice.
Share This Post
post-15882324
Post #755 of 1,084
C

ChrisHeld1989 said:
Does the Tri Starlight have the same tuning as the Shuoer EJ07 or is there a slight difference? The Starlight use Sonion mid-drivers instead Knowles and the estats are a newer model. Does anyone have these two to make a comparison? That would be nice.
Click to expand...

I have the Starlights but not the EJ07, I have never tried the EJ07 so I cannot say. Although I think at $650 the Starlights are exceptionally good and in my view very good value compared to the Empire Ears (EE) Odin, EE Hero, Unique Melody MEST given the driver combinations set against the prices. All descriptions I have heard and read of those TOTL IEMs give me the impression they were listening to the Starlights.
Share This Post
Reactions: zachmal
post-15886645
Post #756 of 1,084

lgcubana said:
...
I really wish the Postmaster General would stop messing with the U.S. postal system. So that I can get my KBear 5N cable, in case I want to buy more, during this month's "sale". A day late (for the sale), my 4 core 5N just arrived. The label says 16 core, but it is a braid of 4, to 2 at the split.
Now that there's no rush for the comparison (thanks Postmaster General), I'll take my time, over a cup (or three) of coffee, tomorrow morning. 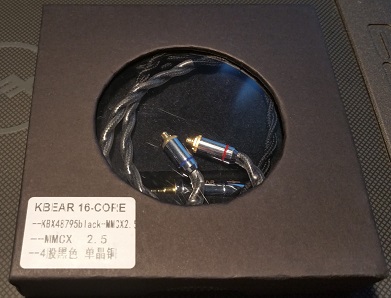 IEMusic said:
I’m actually quite excited for this IEM.
Click to expand... originalsnuffy said:
The Starsea looks an awful lot like the ThieAudio Legacy L3. Which is a pretty nice unit so its not a bad thing.
Click to expand...

Disclaimer:
@baskingshark has a thread on do you listen for your equipment's abilities or your playlist ? link
Doing this cable comparison only validates my belief that I'm more into the music. As such, I'm not going to be the best at parsing micro details. 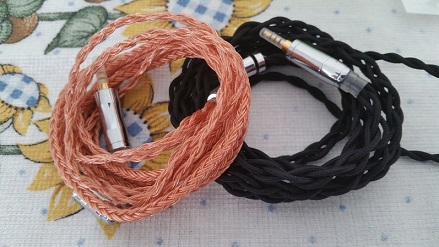 Microphonics on the KBear, at quiet moments in songs, due to outer fabric. Also found the KBear to be a heavier cable 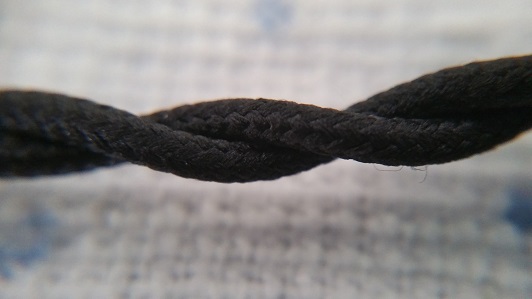 Two biggest takeaways, on the KBear:
Incremental increase to the soundstage width & warmer (but not thick/muddy), more akin to what a tube amp can bring to the overall frequency response.

Was the difference night and day? No
Was it worth the effort, to try an "upgrade" cable ? Yes
For my tastes, I'll be keeping the KBear 5N married to my Tri i3


Sounstage: increased width
Sub bass: the floor is a touch lower on the KBear, on certain songs
Bass: Both cables represent well.
Mid bass: goes hand in hand with the improved male timbre. No discernable bleed over.
*(for the remaining frequencies, I purposely chose songs that are more vocal centric. As the low end was handicapping my limited abilities)
Male timbre: slight improvement
Upper mids to higher frequencies: For those, like me, that are sensitive to "bright" IEMs. Better detail, but not fatiguing.
Details: I'm definitely picking up background notes (on the KBear); where there is only a wisp of a note. But unlike the Fiio EA3, the background notes are in their correct proportion, to the foreground.

Songs:
"When I get my hands on you", The New Basement Tapes. sidenote: I never really paid attention to the lyrics before. Is this song an homage to domestic violence ?
"Hotel California", Eagles
"Empire State of mind (part II)", Alicia Keys
*"Ain't No Sunshine", Bill Withers
*"Yesterday", Beatles (Remastered)

This link leads to specs for the TRi Starsea

Some unusual features. Interesting DD. 8mm composite silicon crystal biological diaphragm. Anyone heard of this before?
"Great compassion
penetrates into the
marrow of the bone."
NAGARJUNA
Share This Post
Reactions: SciOC, IEMusic, zachmal and 1 other person
post-15890817
Post #765 of 1,084 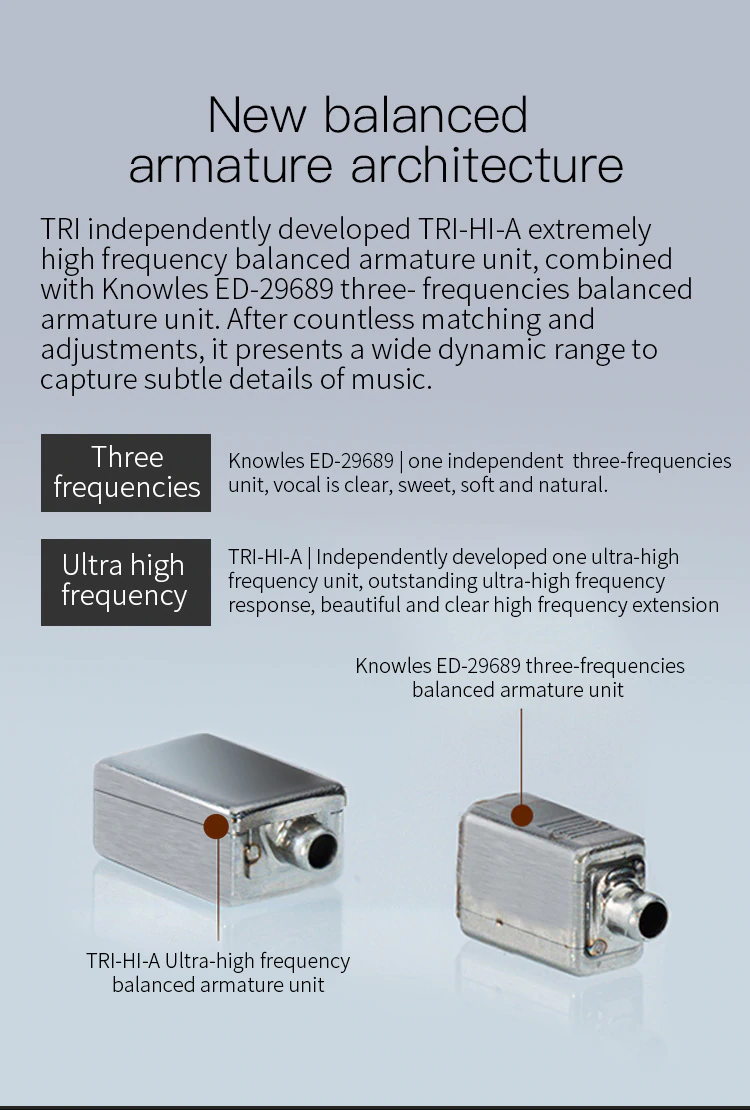 Interesting, a mixture of a TRI BA....? A Knowles and a Composite Silicon Crystal Biological Diaphragm plus four switchable tuning modes. Anybody got a review model yet? Looks like the highs and treble may be interesting.
Last edited: Sep 29, 2020
"Great compassion
penetrates into the
marrow of the bone."
NAGARJUNA
Share This Post
Reactions: zachmal, SciOC, ChrisOc and 1 other person
You must log in or register to reply here.