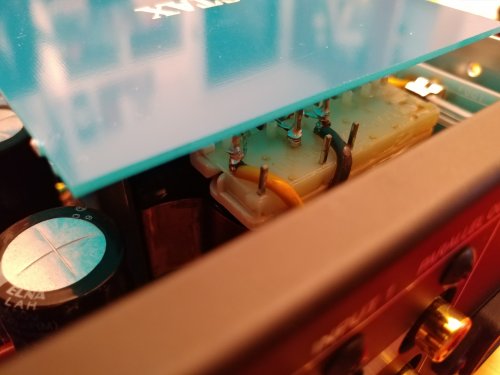 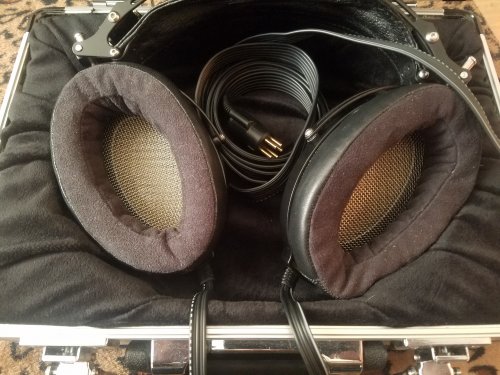 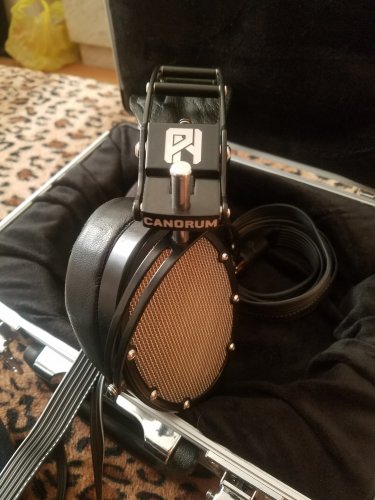 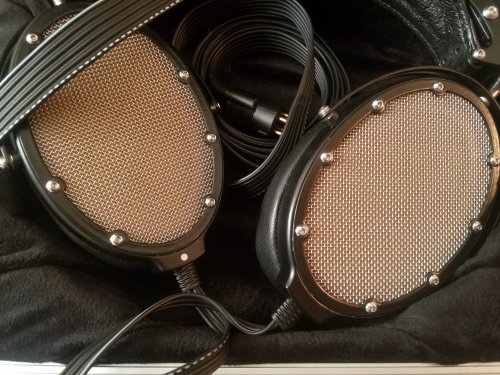 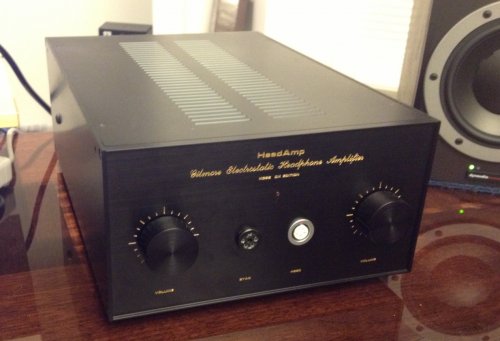 See full thread gallery...
You are using an out of date browser. It may not display this or other websites correctly.
You should upgrade or use an alternative browser.
The Stax thread (New)

Does the 404 sound much different from the 404LE? The few comparisons I have read didn't think so.

I don't think many people have heard the SR-SC1, ceratinly I haven't, what are the sonic differences?

There really is no question that the 404LE is a considerable jump from the 404 and very different despite only minor differences (cable, diaphragm treatment, and color). Many that are not fans of the 404 (myself included), own and love the 404LE.

I'm new to Stax, and the LE's are the first I've owned, so take my opinion with that in mind. My guess is the major difference is the ear pads being leather, which must effect the frequency spectrum as perceived the listener and helps create the amazing strength and clarity in the bass. The other factor probably is the cable they used. I'm not a big cable guy, but it has to make a difference. I just got a pair of the Beyer T1's and the cable they used makes a big difference in the sound I'm sure.
Benz REF 3->VPI Scout->Linn Linto->Cavalli eXStatA Hybrid->Stax SR-404 LE

I called a local Stax dealer today (London, UK) asking whether they had any SR-001s in stock. My girlfriend's dog ate mine during the weekend, so I am looking to have them replaced.

The dealer told me that they were discontinued and out of stock (I knew they were discontinued) but that Stax would probably release some new portables towards the end of the year. Do any of you guys know anything more about this? I am starting to question whether I should wait to see if they release anything new or replace my par now , although I am leaning towards the latter.

^ I have read the same from others around here. That Stax is working on a SR-001MK2 successor.
Do not think that any further details have come out though. If we can expect an all new model or simply a SR-001MK3...

I am trying to get information from people who have both phones, or at least have done a proper side-by-side comparison. The first report, I recall some while back in this impossibly large thread was that there wasn't much difference between the LE and the 404.

At the same time there has been a fair bit of 404 bashing which I don't think has been called for either. To my ears, its problems, if you think they have some, can be solved by removing the foam backing behind the drivers.

The phones are basically the same using the same earcups and drivers however the LE has a different cable and earpad. It is also black and I hope that is not what people really like about these phones.

The 404 uses the top of the line cable also used in the 4070 and 007, whereas the LE uses a newer cable. If the new cable is an improvement I would like to know because possibly we should be looking at replacing the 007 cables.

As regards the change of the earpads, there could be a number of factors at work here. Possibly the change to a real leather pad causes some change in seal or reflectivity of sound although I doubt that there is much in the reflectivity of leather vs fake leather. If the new pads make a difference in position of the driver, eg. moving the drivers further away from the eardrum, that could be a factor. Of course you could put some extra material under the 404 pads to get somewhat the same effect.

At any rate when you find that design variations give a better result it is useful to figure out why. But first you have to establish the actual differences in sound.

If anybody that compares a normal 404 to the LE and hears no difference the something is very wrong with their ears.

The difference is clearly in the diaphragm and not the cable, earpads etc. I've done extensive testing on the SR-404 and even with extreme damping their basic character was still there. Simply removing the foam on the SR-404 certainly didn't do the trick, far from it. I needed to go to ortho levels of damping to tame the midrange peak after completely rebuilding the phones. There is a thread about this process somewhere else...

This character of the 404 is beneficial in the SR-Sigma chassis but not so much in the Lambda frame. I'm not so sure though that we are dealing with the same drivers in the 4070, same basic structure but the diaphragm could be radically different. The only way to really know would be to get replacement drivers and see how they are marked.

As for the SR-SC1, it's been a while since I had my last set but it is like a grown up version of the SR-Lambda, more extension and presence but similar tonality.
www.mjolnir-audio.com

Interesting speculation but I see the same red-framed driver in the LE as in the regular 404. Nor is there any mention of such a change although I see a disclaimer at the bottom of the pdf page about specifications may be changed without notice.

I guess it must be difficult to maintain quality control on the drivers and I would assume there is some variation in all stats based on tension problems with the diaphragm.

I am surprised that you discount the effect of the cable and pads.

At any rate I am still waiting on an actual comparison and review.

A 404LE pad comparison from earlier in this thread (as well as an old pad vs new pad style comparison). I do believe that a thinner pad and pad material would make a large difference in sound as well (these reviews agree). Simply putting pressure on the cups while wearing the headphones so that the drivers are closer to my ears make the bass clearer/deeper, and less midbass (on quick listens mind you, and whilst trying not to cover the back of the cups so that I created reflections/closed in sound)):

The 404 uses the same driver as the LNS and LNC but they don't sound anything like each other. All the older Lambda drivers look alike and all the last round drivers look the same yet sound nothing alike. The bottom line is that we have no idea what's inside any of these drivers without splitting them open.

That isn't the case as any changes Stax makes are by choice, not sloppy craftsmanship. You can take a 1982 L-Pro and it will sound identical to the same model made in 1990 with all things being equal. Same goes for all the SR-Lambdas, LNS and L-Sigs I've owned, dozens and dozens of them.

I my experience they only contribute subtle changes, nothing more. Now if Stax had moved onto an even wider cable that could mean something...
www.mjolnir-audio.com

It could be that Stax has their production line working at a very high level of operation but I would guess that the Stax drivers exhibit some degree of variability and need to be checked.

This is what I saw being done some years ago when I worked with engineers who made electrostatic drivers for air-borne sonars. Each driver was given at a one or more frequency response tests, at different angles of incidence. The measured response of these drivers had to fall within certain parameters or they were rejected.

One of the reasons for the high cost of stat phones could be the cost of making more drivers than make it into the products.

It's too bad that the Stax people don't contribute something to this forum to explain their operation. Suely they can't be unaware of this thread.

A few years ago, when I had Stax Japan rebuild a Sigma as a Sigma pro I remember their willingness to communicate by fax about issues beyond the immediate rebuild. But my last effort at communication drew a blank.
.

Every Stax driver is matched into pairs but the basic design of the drivers makes it easy to crank out identical units year after year. There must be some rejection rate though so that will factor into the cost plus the simple fact that any ES drivers will always be much more expensive to make then any dynamic kind.

Stax maintains its distributors for just that reason, to have contact directly with the customers. It just so happens that the US distributor is worse then useless at everything. They can't even be bothered to supply the dealers.
www.mjolnir-audio.com