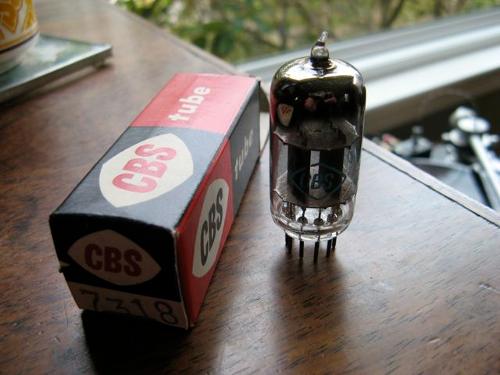 See full thread gallery...
You are using an out of date browser. It may not display this or other websites correctly.
You should upgrade or use an alternative browser.
The SOHA II Tube Thread

rca 5963 a bit too lean
eh 6922 very nice, but not as full as the eh 12au7
mullard 12at7, too warm, bloated bottom end.
eh 12au7 nice well rounded sound, aggressive, yet behaved. works great with my choice of music, primarily death and black metal.

The Brimar is too shrill. The 8416, 6dj8, and 6922 are very mellow. The rest are in between and your choice would depend on what you like to hear. My favorite of the 12au7 family is the RCA 5963. For me it has the best and clearest sound with perfect highs.

It is also fair to say that many of the 12au7 variations have not been broken in much. Everything could change if each set were run for 50 hours and then tested for SQ.
Don't mess with anything that is working.

It might be useful to those building/balancing their system to know what headphones you used to gather these impressions since a pair of tubes could sound good with one set of cans but be a poor match for the sound signature of another.
Home: PS Audio PWD MkII - Bijou OTL - HD800
Work:  Headamp Pico DAC/Amp - ESW10JPN / SR 225i

Edit: Switched to using the Amperex 8416 now than the EH 12AU7. It has a bit more low end extension and softer upper end. Upper end variance is not that big, IMO. Still crisp, but not as forward.

The SOHA II will be my next amp project

In addition to which phones you're using, posting what music you listen to mostly will also help (like Holland did).

I'm going to begin ordering parts sometime this weekend. I want to finish studying the build a bit first. I'll likely stick mostly to the 7007b BOM, but there are a few deviations I'm planning

Interesting thread. Still waiting for my SOHA II kit to arrive but in the meantime I ordered NOS Sylvania 5814A and Amperex Orange Globe 6DJ8 for tube rolling.

BTW, in case people aren't aware. In addition to rolling the tubes you can roll the output transistors. I was using the 2SC3421 but switched back to the BD137. The 2SC3421 makes some tubes sound too shrill. It really didn't go well with the 5963, for instance. The BD137 (stock is BD139) adds more warmth, and is less pronounced in the highs. The 5963 works better with that, though still not quite my favorite as it lacks punch.

SOHA II will also be my next amp project and i have read through the details of it.
And most importantly,i can use one of my tubes collection,ie my TELEFUNKEN ECC82 12AU7 in this project.Of coz,i would let everyone know how they sound.

I don't have the 2SC3422. I've been meaning to buy 50 or so for various projects, but it's a bit expensive. I don't think they will sound thin. I pulled the 2SC3421 from my Dynahi, as other than BDs those are all I've got.

I believe some of the prototypers are using the 2SC3422. Ferrari definitely.

I have used Toshiba 2SC3422 in the amp I built for my GF. I would call it neutral, fast sounding, with slamming bass and slightly on the warm side.

This is in combination with Teflon interstage coupling caps and 6N1P-EB tubes in the front end.

Thanks Ferrari. This is quite the sound signature I'm after to complement my slightly thin and forward upper mids/highs RS-1. The coupling caps should be the Mundorf M-CAP Supreme (not the silver oil series, I'm not that rich

I have some high expectation from the Orange Globe. Read some good things about them. On the paper I think this Grado/2SC3422/Orange Globe combo should defenitly rocks with some good prog/classic rock material.
Headphones Inventory
Vintage Sennheiser HD560 Ovation / Beyerdynamic DT-880 '03 / Grado RS1 / Black Dragon recabled Grado PS-1000

Listened with Senn HD580's and to music ranging from Pink Floyd, Led Zeppelin to Metallica, Alice in Chains, In Flames, AC/DC, to some classical. The EH tubes at first were a little harsh and very in your face, forward soundstage. As they burned in they've settled back, but still have a forward presentation. They have clear, defined highs, good midrange punch, and bass detail. I'd say the only thing they lack is maybe some more bass slam and midrange bloom, however like Holland has mentioned they sound wonderful paired with "Metal".

I realize I'm a newb, but I'll ask anyway

How do you find suitable tubes? When I look at vendor's listings, there are thousands of tubes! I can find 12AU7 easy enough, but how do I find 6N1P-EB or RCA 5963 etc?

When I am looking at the tube vendor listing, can a 12au be any of these? The place I got my 19J6s from has 2 listings, 12AU7/A and 12AU7A RCA. I was gonna order some part tonight, but I might hold off until I'm sure about what I want/need. I might just call them on Monday as well.
Work: FLACs->Foobar->BantamDAC->MHSS->HD580
Home: FLACs->Foobar->BantamDAC->SOHA II->HD650
You must log in or register to reply here.