Menu
Log in
Register
Install the app
You are using an out of date browser. It may not display this or other websites correctly.
You should upgrade or use an alternative browser.
The Masterpiece Thread - Every time you buy an album that's a masterpiece, post here.

Not necessarilly my favorites, but what I consider masterpieces in my collection:

I consider a masterpiece an album that is near flawless. Where not every single song is 100% perfect, but every song is like a puzzle piece and together they form a near perfect experience.

At the same time some albums I consider my "faves" aren't even masterpieces - they may not "flow" as well or have a song or two that may be out of place quality wise or thematically, but other songs on the album more than make up for that.

So this isn't my FAVES album list (although some of these are on there), but a list of the Masterpieces in my collection (in no order...and I'm sure I forgot a few):

And still waiting for Godspeed You Black Emperor's Masterpiece...the first track on Lift Yr. Skinny Fists... is a TRUE masterpiece but the next 3 tracks were nowhere near that track's perfection.

and close but no cigar:
Scientist - Rids The World Of The Curse Of The Vampires

Slint - Spiderland. I could post a whole bunch of other 'masterpieces', but they'd still only come close to perfect.

I agree. A masterpiece isn't about the quality of any indidual songs, ideas, or sound, its about the impact it has as an album.

I dont really listen to the Door's self titled album that much. When I listen to the doors, I prefer LA Woman, etc. But I think as an album, it is pretty incredible, and changed the world of music in a pretty big way.

I'm not going to list my favs, just newly purchased music that I'm loving at the moment. From First To Last's new CD "Heroine". Its amazing. If you like a metalcore sound, but this is a little more mature than their earlier work.

I'll add one which I'm linked to from early youngness and which spins often in my cd player , and it's one of the greatest ( if not the ) "pop" performance I have in my library , ridculously great..

Hi, on these classical recommendations, it would be great if you could include the actual album. There's so much difference between different recordings. For example, one day listening to the radio in the car I went so nuts for Boulez' Bruckner 8th that I pulled over at the next record store. But they didn't have that version. I bought Gunter Wand instead and it did absolutely nothing for me. Thanks for this great thread. I'll post mine soon.
EAC/LAME + HP iPaq 2215 + Seagate 8GB microdrive + Conduits PocketPlayer + Etymotic ER6 or Koss SportaPro

Their timelessness may fade, but here are a few recent purchases that I find myself listening to 3-4 times in a row, day after day: I never would have even sampled the last one in record store, but on a long plane flight I found myself listening to it over and over without even realizing it.
EAC/LAME + HP iPaq 2215 + Seagate 8GB microdrive + Conduits PocketPlayer + Etymotic ER6 or Koss SportaPro

I'm diggin the lists...I do think Can has been noticeably absent though...selon moi...

)
History, Stephen said, is a nightmare from which I am trying to awake.
--James Joyce, Ulysses

Well from my extremely small collection of albums (a mere 20

), I would consider only one to be a masterpiece: 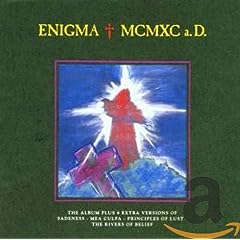 IMHO, it is a perfect album which Enigma has yet to improve on, even after several new releases.