Roasty said:
I did a thing today... I'm sure you guys have seen this many times.. I always enjoy the unboxing. Can't wait to have a listen to them tonight, after putting the kids to zzz.

I have the HPA4 and Woo Audio 22. I hope these will be good enough for these headphones.

I got the Lite version. The stock cable should be decent enough? Apologies if this question has been beaten to death, but saving me from going through 600 pages; what headphone cable do most here recommend?

I'm using the danacable lazuli reference with my Utopia and Lavricable Grand Line / Norne Audio Silvergarde S3 for the Empyrean.
Click to expand... 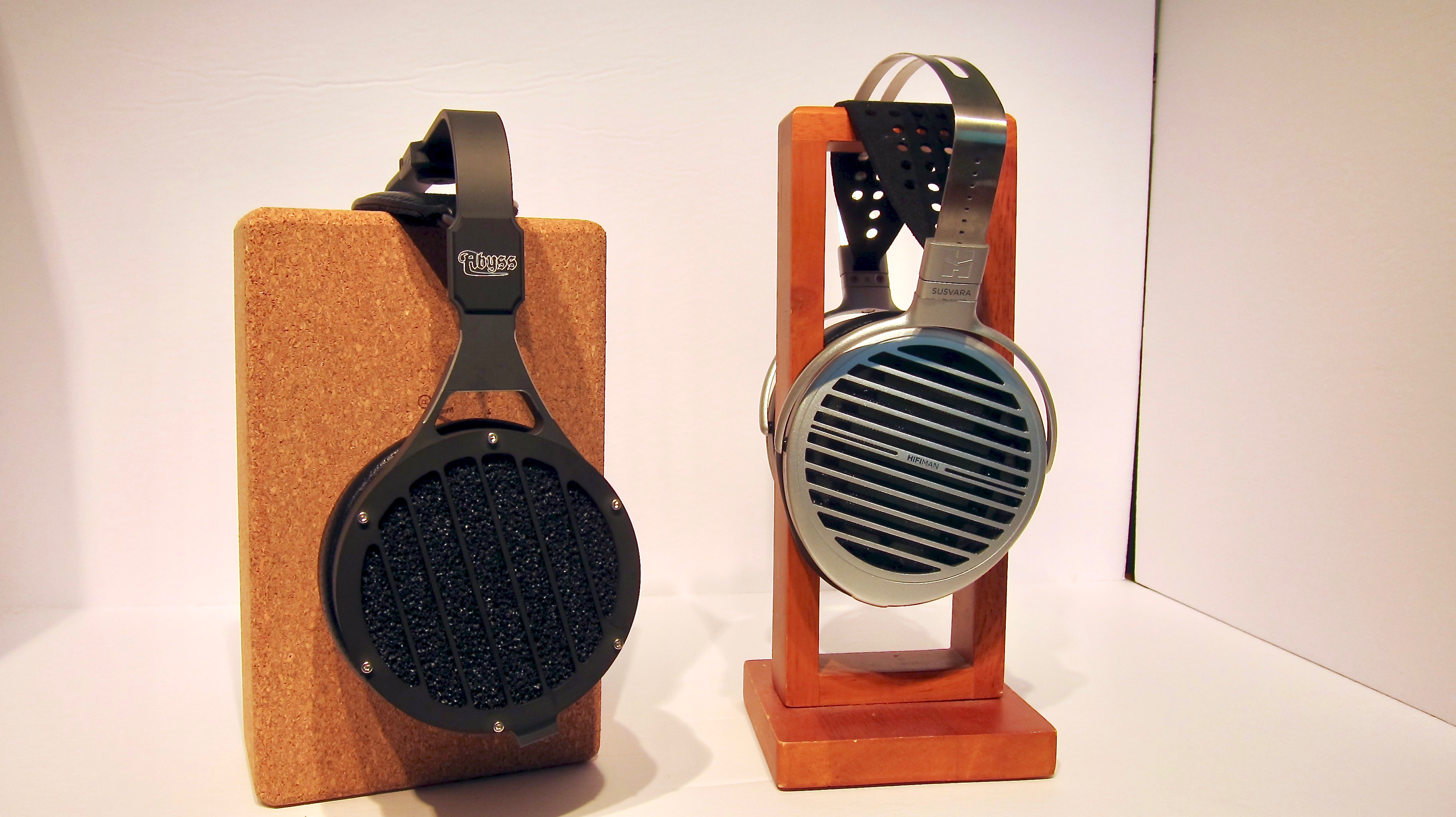 lithiumnk said:
Congrats !
There is niimbus US4 & v281 in the background (looks like AVONE store). Did you tried them with TC? How do they sound as compared to hpa4?
Click to expand...

Thanks! And yes, it is AVone!

I did try the TC with the nimbus for about ten minutes. I can't really comment on the pairing because I had the earpads on the TC positioned wrong. I only got the pads positioned well after taking the TC home..
Singxer SU-6 > Holo Spring 2 Wild Edition > Woo Audio 22
Benchmark DAC3b > Benchmark HPA4 > Benchmark AHB2
Matrix Audio MQA X-Sabre Pro > Headamp GSX Mini
Abyss 1266 TC Phi | Focal Utopia | Meze Empyrean
iBasso dx220 > 64 Audio A12T
Share This Post
post-15225317
Post #9,020 of 10,346

after burn-in, does the sound signature of the TC + stock cable still lean towards a little bright?

Roasty said:
after burn-in, does the sound signature of the TC + stock cable still lean towards a little bright?
Click to expand...

Guys, any recommendations to make the ab-1266 tc more comfortable? At the beginning, I was so taken away by the sound that I did not feel any discomfort. After some months, I am reaching more and more for my empys. Not the same, but so comfy. I was thinking of wrapping something around the headband of the ab-1266 to make it softer, may be... any ideas? My setting is lose but not overly so (which I find also uncomfortable, the dangling is not nice), with the pads at an 11oclock position seen from the front.
Last edited: Oct 4, 2019
AB-1266 TC, Stellia
Share This Post
post-15226185
Post #9,023 of 10,346

simorag said:
After a very intense – and utterly enjoyable – week of listening, it’s time for a feedback about the Simaudio Moon 600i (V1) on this thread, i.e. the very place where I heard of how good is the 600i / AB-1266 pairing.
I am on the quest for my ‘endgame’ (yeah, I know ...) amp for the Abyss since several months now, after selling my XI Audio stack. The main reason for me to sell the Formula S / Powerman – indeed a very good match for the AB-1266 – was to get a single amp capable of driving headphones (primary use) and loudspeakers (secondary use). Long story short, the 600i is a very capable integrated, and ticks most of my boxes, but not enough to convince me to keep it as my ultimate companion for the Abyss.

On the positives, compared to driving the Abyss directly from the DAVE, there are three main bonuses in my opinion: (a) macrodynamics, (b) soundstage size and layering (the latter especially with large scale and/or very complex music played at louder levels) and (c) bass tightness and control.

The remarkable thing is that the 600i achieves these results to a significantly larger extent than most other amps I tried, by retaining ‘almost’ all the transparency, microdetail and overall finesse of the DAVE.

The 600i is a very smooth amp, its treble never gets harsh and its overall presentation is polite, in a good way.
The midrange is, while slightly, a bit more recessed than DAVE direct, and vocals may appear a tiny bit thinner.
Tonally, the character of the source (DAVE + M Scaler in my case) was rendered in an extremely accurate fashion, confirming the neutral and transparent character of the 600i.
Overall, the 600i gave me a superior listening experience than DAVE direct, or DAVE + Formula S, as an all-rounder, and excelled with live music, orchestral, electronica.

The reason why I am not keeping it is very simple: I have liked more other amps I auditioned during my quest, while unfortunately at a much higher price.

In terms of sound quality, the Riviera AIC-10 is my favorite so far, as it combines an emotionally involving midrange, harmonics richness with soundstage size / airiness, transparency and bass authority better than the other amplifiers I tried in my system.

I am going to audition a Viva Solistino (same design as Egoista 845, with speaker taps instead of headphones out), in the next days.

I’d like to add that over the last months I had to reconsider how good the DAVE (with M Scaler plus lots of other tweaks) headphone output is. It is much harder to improve on than what most people would think of, myself included.
Click to expand...

I have a very different audio system than what you have, and the Moon 600i is the only gear we have (had) in common. Still as different as the rest of our gear is I must say that your description of the 600i resonate very much with what I hear. I have never heard the Riviera AIC-10, but can imagen that if it has a bit fuller and richer mid-range than the 600i it would be a killer amp, especially together with headphones that can sound a touch too lean and dry in the mid-range.
Roon -> ultraRendu -> Lush^2 USB -> Gustard U16 -> Audioquest Eagle Eye -> Aesthetix Pandora Eclipse -> Marantz PM 11 / Master 9 / Simaudio Moon 600i / -> Audeze LCD-3F / Hifiman HE-6 / Hifiman HE1000se

after burn-in, does the sound signature of the TC + stock cable still lean towards a little bright?

reason i am asking is because if that is the case, then i'm going to be leaning towards a danacable in hopes that it will do the same for the abyss as what it did for the utopia.
Click to expand...

Recommend 100+ hours for initial break-in. During this time the sound settles down a bit on the top and bottom end fills in, particularly deep bass, this with the stock cable. If you're using an aftermarket headphone cable suggest to avoid silver with the 1266, particularly with solid state gear, as it will highlight certain upper frequencies. Also need to consider the source, if the sound does not suit, tweak the system components to fit, which typically means moving into a higher price class of components. In your system the HPA4 amp is a great start, I'd focus on the rest.
Abyss Headphones
JPS Labs
StackZilla racks
ABYSS YouTube Videos
Share This Post
Reactions: Roasty and llamaluv
post-15226911
Post #9,025 of 10,346

simorag said:
After a very intense – and utterly enjoyable – week of listening, it’s time for a feedback about the Simaudio Moon 600i (V1) on this thread, i.e. the very place where I heard of how good is the 600i / AB-1266 pairing.
I am on the quest for my ‘endgame’ (yeah, I know ...) amp for the Abyss since several months now, after selling my XI Audio stack. The main reason for me to sell the Formula S / Powerman – indeed a very good match for the AB-1266 – was to get a single amp capable of driving headphones (primary use) and loudspeakers (secondary use).
Click to expand...

Don't forget to tune with cable, when you get to your destination amp.

Great review, thanks for all the effort doing this. I agree 100% with your appraisal. In my case, and with a tube DAC, I didn't want / found I didn't need, to change the timbre or signature. From my Kassandra it is spot on to my ears. I wanted the same signature, just amplified and without added grain or edges, loss of detail etc. My view is, and for speaker systems as well, tube in the signal path can and do sound more natural to my ears than SS right through.

It doesn't always need tubes right through to get there, tubes in the DAC gain stage, or tubes in the amplifier to me makes a great system really special. I also find a tube pre with an SS power amp works well in a speaker system.

The 600i is a very capable amplifier, to better it IMO you need to go to big bottle tube amps, 813, 211 or 845s and well designed.
My Genus is above the 600i but not as practical for HPs only.
PS Audio P10 > 432 EVO AEON Music Server > FTA Callisto USB > Aries Cerat Kassandra Ref II > Aries Cerat Genus SET Integrated > Zingali Client Name Evo 1.2 or > Abyss TC & LCD4.
Distributor for Aries Cerat in Spain: www.ariesceratespana.com
Dealer for JPS Labs Abyss and Diana: www.auriculares-highend.eu
Abyss TC, Diana & Diana Phi on promotion for February
Share This Post
Reactions: Litlgi74
post-15227339
Post #9,027 of 10,346

tholt said:
What specifically is uncomfortable? The headband on your head?
Click to expand...

Hoegaardener70 said:
yes, mostly that but also how the pads fit the head. 11 degree is Stil the best but not optimal either...
An additional second strap slightly below the original one may be?
Click to expand...

There are quite a few mods and tweaks in this thread that address fit and comfort. Maybe take a look back to see if anything looks like it might help. Despite the weight, I find the headband and fit surprisingly comfortable; the headband sort of perching on my head and holding everything in place. My cups are pretty loose; if I shake my head, the headphones wobble. The only thing I might start noticing after a while is the weight: my neck can start feeling it.

Yes my fit it like that as well. I toe in the frame a bit, have the frame on full width, and have a small gap (port) under my ears about 3cm wide maybe. Small gap, not huge.

Users Who Are Viewing This Thread (Users: 0, Guests: 7)