Was listening to this song earlier. hadnt heard it in ages, completely forgot how incredibly badass it is. so put on that cd or vinyl and listen to some jim 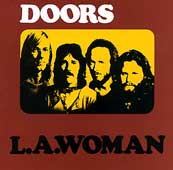 What a great ALBUM. I own both the DCC (Steve Hoffman) CD and the more recent 1999 Bernie Grundman CD, and it may be heresy, but I prefer the Grundman.

Personally, I've gone back and forth on the Doors for many years. Back in the '80's I loved them, then found them passe in the 90's. Recently re-discovered the band, I literally CAN'T BELIEVE how good they are. Their catalog is spotty, Morrison came in and out of coherence and sometimes other band members wrote the lyrics to the detriment of the band's reputation.

Anyway, LA Woman is so solid, it really was a big come-back for the band. He could have done so much more, he was nowhere near the end of his career. What a shame he checked out after this, it promised so much more!
Click on my user name and send me an e-mail.
Share This Post
post-1475429
Post #3 of 9

I like L.A. Woman a lot, but it's not my favourite Doors album. I think LAW is immensely strong for Jim Morrison and mostly mature, but it gets stolid and heavily self-regarding in places (who ever accused Jim Morrison of being self-involved?). We could list our favourite tracks on the lp, and nobody would be too put out. I just think "Cars Hiss by My Window," "L'America" and even "Riders on the Storm" are a bit overwrought.

By contrast, Hard Rock Cafe/Morrison Hotel is my favourite, and I would argue it's more mature, because it's lighter. Of course, it has epic moments of bombast -- "Roadhouse Blues" and "Ship of Fools" perhaps especially -- but I think there's a knowing irony and absurdity in these pronouncements (of the same kind that you get with Lou's "New Age" in Loaded). "Peace Frog" is one of my favourite tracks -- all the apocalyptic imagery is offset by the jaunty, funky, positively loungey melody and tempo. As with "Queen of the Highway" and "Spy in the House of Love" all the menace is camp. It conveys a sillier but more spontaneous and innocent picture of the new American West.

When I was a lad in my twenties, there were lots of guys who said Jim Morrison was the great American poet. Do people like that still exist? Anyway, that attitude to The Doors ought to be avoided, IMHO. On the other hand, Jim M. commented that the performing artist he most wanted to emulate was Frank Sinatra. I think that's the best way to approach what the Doors did.

L.A. Woman is tremendous but not perfect. Hard Rock Cafe/ Morrison Hotel is quirky but, I think, even better. Another 60s album about how your life is saved or damned by rock 'n roll and how the differences between salvation and damnation are not always easily distinguishable. 'Deserves a re-evaluation.
For current inventory, please see "Details."
"Unfit for life, unsure of love, unschooled in sex, but good at washing up"
-- Epitome of the life of Philip Larkin by Julian Barnes
Share This Post
post-1476426
Post #6 of 9

I have been a fan of them since I was young , and they surely grabbed my attention from first , for the many aspects their music grab out attention at different levels. My love for them evolved during years , and I still consider the whole band one of the most if not the most romantic poetical rock ensamble I've been linked to in years .

Every album have his own mood and this changes alot among them allowing one to literally space among their poetry , to grab one choice for every season / period / evening , and fit a varying expectation .

LA WOMAN and STRANGE DAYS have been my most played for sure , but i couldn't tell the others aren't up with them , different : yes . Very different ? Yes , all among them , and to my taste , they are very different , yet all retain the same poetical unique way that characterise The Doors .

I remember how when i first listened to the doors and grabbed in few time all of their album , I appreciated the first albums the best .. then my attention slowly shifted to the last part of their music history and poetry.

Now that i passed so much time with them , I know they are that singular " one of a kind band " or better one original archeotipical music element of my rock library , and today I consider all their cd really equally appreciable , just for different moods .

I know them well , and i'd say I love to get through them as in a path I walk on and percurr without noticing all the detail , as an experience - this opposite to the more flat "listening to music , lyrics , getting involved for this guitar or that lyr or funky/blasting rythm or emotional ambience or deep bass " that well apply to other rock cd of my collection , truest for the latest band rock release ...
HP-2 as instrument of pleasure and pureness

People of Earth
long have I traveled to be able to enjoy your Rock and or Roll music. It is fortuitous that on your planet you are able to discuss musical ear-helmets without fear of persecution
feedback here waaaaaAaAaaaaaadia 321 @Â°_Â°@ -->...
Share This Post
post-1476555
Post #8 of 9

I agree that The Doors are one of the singular American bands of the 60s -- as unforgettable in their way as the Velvet Underground. When Jim gets his head screwed on right, nobody says it better. It's an extraordinary catalogue of music.
For current inventory, please see "Details."
"Unfit for life, unsure of love, unschooled in sex, but good at washing up"
-- Epitome of the life of Philip Larkin by Julian Barnes
Share This Post
post-1479606
Post #9 of 9