I haven't heard the Aiva but I would say the Sendy pads are a good start and make a massive improvement to the quality of the sound (more comfortable, too), most notably the shouty, hollow mids. And since they share the driver, after you swap the pads, it's only the cup shape/resonance and rear dampening that would make a difference in the sound between the Aiva and HF580.

Miiksu said:
This M1060 sheepskin earpad.......... SERIOUSLY? I get midrange to rise and keep the treble same or better level. I did not know this was angled... Also subbass goes deeper. More comfort than Brainwavz oval sheepskin. Probably the best earpad I have tried so far for this headphone!

One treble spike around 11kHz. Easy to EQ but I wonder if I could do some pad mods and lower it. Modded Brainwavz Oval Sheepskin pads have smoother treble but this at stock and better midrange and bass. jasswolf said:
So what are the recommended mods for these now? Material in the back of the housing, earpad change, or both?
Click to expand...

Improvement is huge!! Even with the default earpads the Takstar is very very good.. .but if you put on those earpads... it's 10x better! It's so simple and easy to do!

Restatic said:
I told you

You will love it! Such a simple addon.... does improve the Takstar so much! I'm getting same feeling on my Takstar like I've had on an Audeze LCD-x. I do push the Takstar with OTL tube amp: Little Dot MK2.
Click to expand...

I haven't yet figured how to lower that one small treble spike complitely. Do you hear too that treble spike? My is modded so sound is quite different that urs perhaps. Kinesio tape on the inside walls helped slightly. I may try to make my own pads. Pads shape from the inside is most crucial. Is it oval, rectangle or angled. Also how big they pad is also makes sound more different. I think best is try to keep the pads big as possible.
Share This Post
post-15411046
Post #800 of 881

I made some mods to the M1060 pads I have now some kinesio on the inside walls, felt and high density foam under pads. Bretty clean burst decay. Of course all my other modifications inculed. Hot spot at 11 kHz still exist. I think this headphone is still very clean of disortion. I don't hear any unwanted messy thinks but more like ringing sometimes. I can't measure disortion very well but you can get the idea where is the hot spots and they are only on the upper treble and low middle if you not mod. 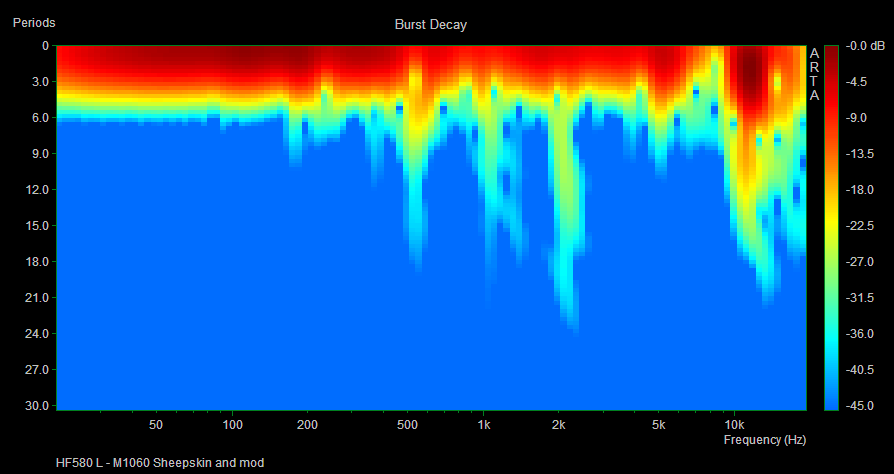 Hi guys, anyone know how it compared to ath r70x?
I love r70x but need an upgrade for the soundstage. R70X has kinda balance sound signature, from bass mid to treble.
Is it an upgrade? Or r70x is better? Thx

depends what you listen to, really. if you're a fan of electronic stuff it's ability to pull bass (eq gets it almost on par with 1060c bass) without really sacrificing much else is quite nice.

I personally think dynamics still do pre90s music better but it could be nostalgia bias for me.

I don't have really problems with soundstage. I think its just slight blurriness on the upper frequencies. But then again if u want best treble or better bass response? I think this HF580 does many thinks very well when modded. I have even got the midrange rise and its now perfect level. Many planars have problems at 2-4kHz. Too veiled and this headphones is not expeption. I like the planar bass response its deep, strong and clean. Bass heavy songs sound so weak on dynamic headphones or aleast on all that I have heared.
Share This Post
post-15416261
Post #805 of 881

Hmm. I think I nailed it again. More back dampering. No spike treble but it still very strong. Some elevated upper bass and low mid range. Its over 95% closed headphone now. Subbass is a bit on shy side but easy to equalizer. I need check when I have more time if I need all those multible layers of back dampering. May be a bit messy and dffficult to do all my mods.... 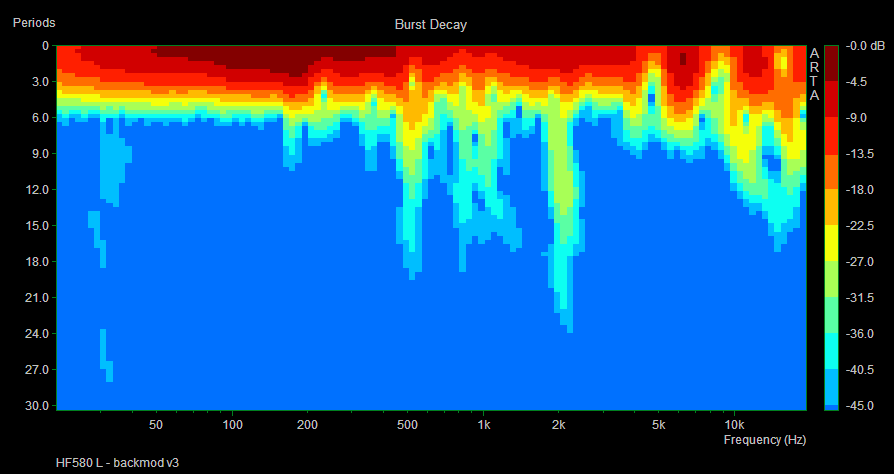 Miiksu said:
Hmm. I think I nailed it again. More back dampering. No spike treble but it still very strong. Some elevated upper bass and low mid range. Its over 95% closed headphone now. Subbass is a bit on shy side but easy to equalizer. I need check when I have more time if I need all those multible layers of back dampering. May be a bit messy and dffficult to do all my mods.... Analytically you've done well, but is it preferable as a closed-back sound, was the brilliance boost right in that detail zone more welcome after the modifications?

jasswolf said:
Analytically you've done well, but is it preferable as a closed-back sound, was the brilliance boost right in that detail zone more welcome after the modifications?

Yes, I know I should have another headphone on the desk that is unmodificated to hear differenties. Sometimes I hear more subbass when modding but then again got more uneven treble.

You lose a lot sensitivity. Something like 8-10dB when doing all my mods I think mobile phone can still light this but not well.

This is my latest backmod. I used leather and magnetic sheets outside because it was brettier than using paper or tape. Use something thick to seall all the leather areas and the box in the middle is medium density 3mm foam. Not sure if u need all the inside mods. Atleast someone can try and listen if its any good? Or do it need to pair with more mods. 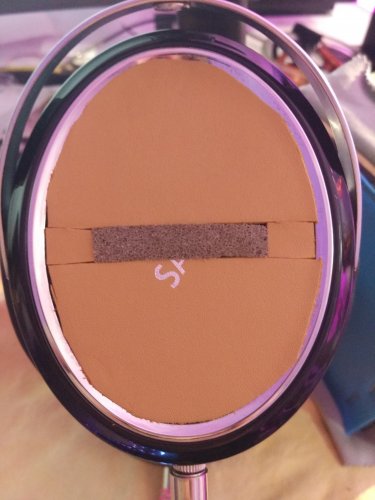 After about six months with the HF580, trying numerous mods and pads, I think that I finally started to figure this one out. The problem I had with all the mods was, that they were making the treble way too elevated sibilant and piercing. It was unbearable to listen to it for more than 30 minutes, when it became too fatiguing for my ears. I decided to remove all the mods, and start all over again.

After reading someone's post in this thread (sorry, don't remember who the credit goes to), I decided to find suitable pads first, and mod later, if I'm still not satisfied with the result. At first, I started modding the HF580 cause it was lacking the sub-bass that planars supposed to have. By pressing the cups against my ears, using stock pads, I managed to regain some of the bass I was lacking, meaning that creating a good seal between the ear and the driver is paramount for experiencing what this headphone has to offer. Because of the large cups, slim original pads and the low clamping force, I noticed that there is a gap under the ear that brakes the seal. 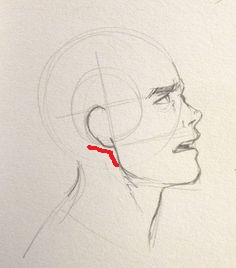 So, using thick pads, that confirm with contour of the area around the ears is a must. I guess this is why Sandy Aiva pads work so well. Since this discovery, I only used those HM5 pads, and it sounds really good. I have numerous other HM5 pads that I'll try later and report, but from what I hear, I don't think there'll be much of an improvement, as long as there's a good seal. Maybe only if the pad is a whole and not perforated from the inside...
Share This Post
Reactions: Restatic, jasswolf and theangelboy
post-15418026
Post #809 of 881

Subbass is a bit shy, even modded. Why not EQ? I use now those China M1060 angled sheepskins. It's difficult to increase subbass. But some back mods helped it slightly. 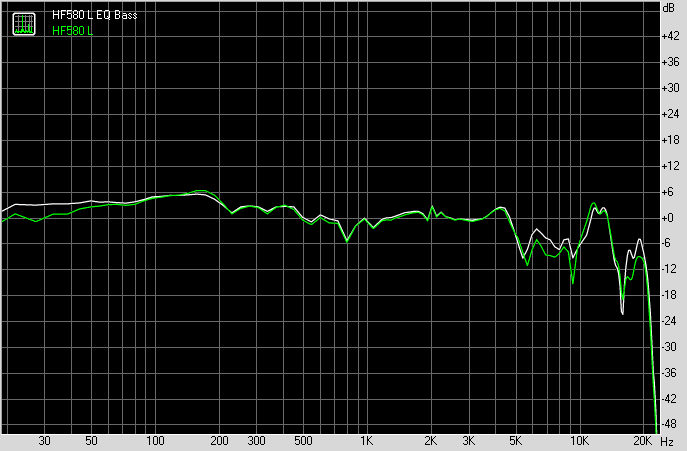